This post is for the Nachos Grande Blogger Bracket Challenge.  Having come in dead last in the voting after writing the way I usually write (message received, by the way), I've decided to take this one in another direction.

No ballplayers were harmed in the making of this blog post.  And for the record, I'm a fan of all of these guys and wish them well. 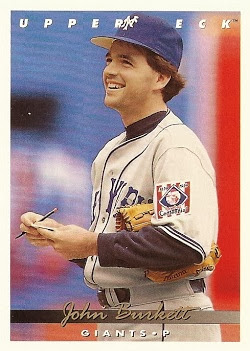 So it was that John Burkett, fresh-faced right hander out of San Francisco, infiltrated the Mets organization in 1992 under the guise of rookie phenom "Rusty Shackleford," a highly-touted albeit fictitious triple-A sensation from Dubuque, Iowa.  A few well-placed letters of recommendation and he found himself invited to try his skill at spring training.

No one knew what Rusty looked like, but his Mets uniform was utterly convincing as was his affable demeanor.  The boyish gentility of this newcomer won over the hardest of hearts (Vince Coleman).  Even gruff manager Jeff Torborg came around at the sight of the rookie’s dark, smiling eyes and soft, feathered hair.  This ruse would be a piece of cake.

What the team didn’t know is that Rusty carried with him a little handwritten paper roster and a Bic mechanical pencil.  After only a few days he had won the respect and affection of everybody on the team, so they were not suspicious when unfortunate things began to happen at spring training and names began being crossed out

Burkett started with little things that could be mistaken for pranks.  For example, he superglued David Cone's chin to his shoulder when he fell asleep watching Bebe's Kids in the clubhouse.  Everyone had a good laugh - it seemed harmless, maybe even cute.  Then Cone sneezed, dislodging two vertebrae and ending his pitching career (and almost his breathing career).


Unfortunately for the '92 Mets, it wasn't long before these "pranks" began to lose their subtlety.  One day catcher Charlie O’Brien began seeing what he described as “little blue Hitler bunnies” in the infield.  A few drops of experimental government psychotropics in his Miller Lite and the poor guy was seeing them everywhere, and all the time.  “There!  No, wait….there!  Don’t give them carrots, guys!  They’re anti-Semites!”


Shortstop Tony Fernandez always had a cup of coffee the morning.  Little did he know that one morning in particular his cup would contain half coffee, half highly-concentrated uber-dose of elephant-grade veterinary colon cleanse.  The results were too horrendous to describe here.  Suffice it to say that for the next few months he went through a lot of pants.

It wasn't long before "Rusty" started going after the power hitters.  Burkett made a few late-night calls to the homes of Eddie Murray, Howard Johnson, and Bobby Bonilla, impersonating each one of them and making aggressively sexual comments about each of the other’s familial and marital affiliations.  He also mixed in some "yo mama so fat..." stuff because it was 1992.  The result was a Three Stooges-esque free-for-all….with bats.

At the height of their confrontation, Murray took aim at Bonilla as Bonilla whacked Johnson over the head with his backswing.  Johnson took advantage of the angle, inserting his entire bat somewhere very uncomfortable.  "Like the back of a Volkswagen," Burkett thought and laughed to himself.  The only thing Burkett liked more than human suffering was movie references.

Vince Coleman was a solid runner, but even that is no match for meticulously trained seagulls thirsty for the sweet juices of the human eye.  He was in the outfield one afternoon when they swooped in and pecked his skull sockets clean with the precision of a pack of flying half-starved jackals surgically removing every chunk of meat from the bone.  They were gone before he could even cry for help.  Needless to say he was never a particularly good outfielder again though he could still step in front of a pitch pretty well so long as you whistle when you throw the ball.

Speaking of packs of starving jackals, John spent two weeks starving a pack of jackals, allowing them only to occasionally sniff a pair of Todd Hundley’s dirty socks.  He then marinated Todd's cleats in gravy for good measure.  Once set loose upon the diamond during practice one day they quickly found their prey.  While they wouldn’t kill Todd, he would lose forever the ability to squat.

It wasn’t until Shea Stadium looked like that one scene in Gone With the Wind where they zoom out on all the dead and wounded soldiers laying in rows did Jeff Torborg begin to get suspicious.  In the locker marked "Shackleford" he found a little folded paper roster, nearly every name crossed out (Sasser's name just had "gonorrhea" scribbled next to it).  He started researching Rusty’s minor-league stats and found that the man had none.  Torborg pulled “Rusty Shackleford” into his office and started grilling him.

“I think that would be best, son.”


Rusty got up walked out, smiling as he passed Bobby Bonilla on the way out of Jeff’s office.  Bobby walked in straddling air as though he was riding an invisible horse.  “Where’s The Shack goin’?  He’s not cut, is he?”  Everyone loved The Shack.

“I don’t know yet, Bobbo.  I may never know what it is that makes a ballplayer, or a man for that matter.”  Jeff pondered for a moment and noticed Bobby staring at him quizzically.

Torborg relented.  “He’s going to get his Witness Relocation Program membership card and shirt from his car.”

Torborg began to chuckle at Bobby’s inability to understand words when suddenly his eyes widened. A wave of bitter Torborgian comprehension spread over his face, and the anger burst forth from his throat like rage vomit.  “Stop that man!” he yelled out into the corridor, but it was too late.  The impostor was gone.  The damage had been done.

"Shacklefoooooooooord!!!!!!!!" Torborg bellowed, raising his arms helplessly into the night.

Thus, the ’92 Mets would have another sub-par season and go on to be called “the worst team money could buy.”

A week later two men sat at a shadowy corner table at a 24-hour Blimpie in Toronto, Canada.  “They won’t be a threat to you anytime soon,” Burkett said.  “I took care of everything.”

“Very good,” said the other man.  He took an envelope out from under his blue and white batting helmet which lacked ear protection.  “Our best statisticians have foretold that the Mets were poised to win the World Series this season, but thanks to you baseball will finally belong to Canada.”  He passed the envelope across the table.  “Here’s the agreed-upon sum.  You taking all that back to San Francisco?”

“Banque Suisse, untraceable,” Burkett replied as he took a sip of his coffee and gazed out the window.  “Only the baseball card collectors will know what really happened, and no one listens to them.”

The men sat and basked in the afterglow of the perfect crime.  “Are you available next season, John?  Seattle is starting to show some skill."

"Not a chance," replied Burkett sternly.  "Too much respect for the program."

"I understand.  They really are the best."  He pondered a moment.  "How about Atlanta?  Seems they may begin to pose a threat to Canadian dominance.”

Burkett's black eyes slowly filled with that same insatiable bloodlust that got him the Mets job as he turned to the behelmeted man.  “Get me the uniform.  I'll gas up the wood.....chipper."
Posted by The Junior Junkie at 9:28 PM