Is this a good Griffey card?  Yes.  The first Griffey ever from the long-running and popular SP brand.

The set: SP was pretty awesome from the start.  The packs were pricey, but the cards were just so exciting.   The photography was amazing and the card design never got stale.  As a brand it would remain consistently upscale and modern.

SP introduced us all to the die-cut baseball card and would remain the industry’s biggest proponent of die-cutting for years to come.  There were examples of it around before this brand, but only circular “disc” cards, never regular square cards with cut-out designs.  The wide arch shape in the lone insert for '93 is the first die-cutting I ever saw, and they would get a lot of use out of that shape which is only hinted at on the base cards.

Now let’s not beat around the bush - we all know what 1993 SP means: the Jeter Rookie.  Sure, the green Topps Draft Pick rookie is pretty well-known, too; but the SP is far shinier with two kinds of foil, color portraits on the back, and, of course, that premium Upper Deck pedigree.  The SP trumps them all.  I mean, I don’t know for sure - I’ve never seen one in person.  Still, judging from the prices I’ve seen them go for, it must be pretty nice. 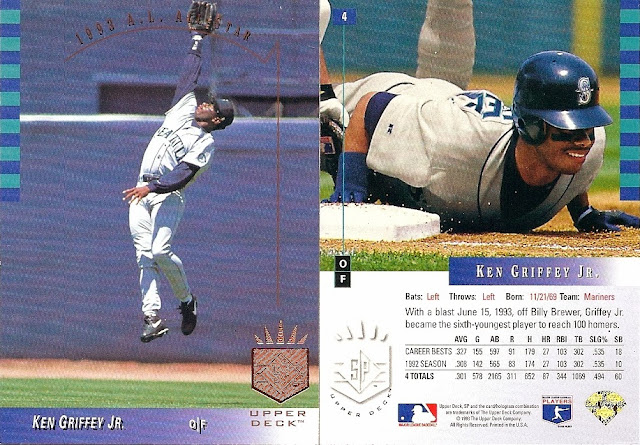 Junior is leaping straight up, high in the air to make a catch.  This is not Junior’s only Superman card, but it is one of the better ones.  The lighting and cropping here are perfect, and how cool is that SP logo?  I think this is the best it ever looked.

And that's not all.  Check out the shot on the back.  There are not enough cards depicting Junior sliding, but of the ones that are out there this may be my favorite.  SP took card backs to a whole new level.

Griffey’s is an All-Star card which means it says “1992 A.L. All-Star” where on a normal card it would just say the team name.  Topps Finest of the same year would do something similar.

There is only one additional Griffey from this set, and I don’t have it:

That's right, the die-cut one.  I continue to resist using COMC pics to show cards, so I'll be posting it as soon as I can find one.

As a huge fan of this set, I would also like to get my hands on these: