A Junior for All Seasons Part 1: the Kid on the Topps Designs of the 50's

Even if you never collected vintage cardboard, you’re probably still somewhat familiar with the Topps designs of the past.  Just about every brand has embraced the fact that Topps runs the show when it comes to vintage card design.  This fact combined with the card industry’s sea change towards a more classic aesthetic has resulted in a plethora of vintage Topps designs featuring modern players.

This series showcases by decade those vintage Topps designs that feature a Ken Griffey, Jr. card.  We will start where Topps did - the 50’s:

This is an homage to the 1951 Blue Backs, some of the first cards Topps ever made.  These are less a baseball card set and more a 52-card deck of baseball-based game cards.  While the ’52 set is considered the first real Topps set, I couldn’t very well leave this gem out of the lineup (though I am a little resentful about the fact that Junior got an “Out” card).  There were also red backs which were less rare.

The first real Topps set, these were not very popular.  Many cases ended up sleeping with the fishes like Luca Brasi which contributed to their relative rarity.  The design is great, though.  It’s no wonder Topps reused it twice.

Which do you prefer? 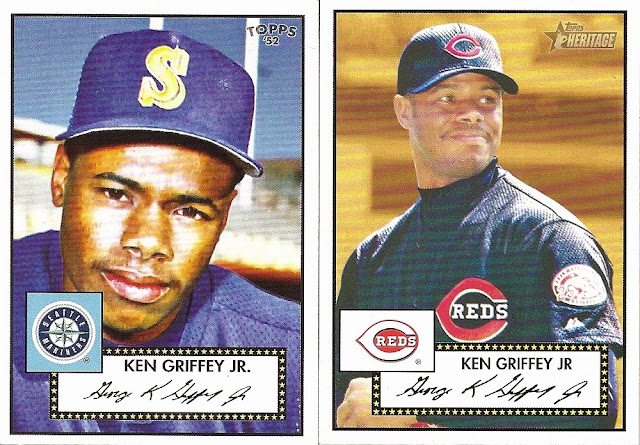 
Less a card than an oddball postcard, this advertises a print done by baseball artist James Fiorentino.  And I’m pretty sure that’s my backyard.  This design was used in the 2012 Topps Heritage set, but no Griffey was made as he was already retired.


That’s a strange selection when it comes to color here in ’54, but a great tribute to the original design.  It seems Fleer also liked this design as their Tradition and Update design from 2000 is very close to it.


It’s not exact, but it’s close enough so that they are clearly referencing the ’54 Topps design.  Griffey changed teams in 2000 so he gets two.  I love that.


The Heritage designs tend to be really faithful to the original, and this is no exception.


For this year we have a rare three-for of Junior throwbacks.  First is this sweet Heritage card from 2008, just before Junior made his move to Chi-town then back to the Mariners.  I love this card – it’s a great portrait of our guy and almost rookie-like in vulnerability.  And do I spot a Mona Lisa smile?  Indeed, the Kid is full of mystery.

There is also this oddball from 1991 with no team logo and no apparent pedigree.  Still, it’s clear what they were going for.


Finally, the iconic ’59 Topps Sporting News Rookie Stars design as interpreted by Baseball Card Magazine (who made a lot of throwbacks).  This card has an awesome look, bright and colorful with a great patriotic striped shield design.  There don’t seem to be any major stars to come out of the original ’59 Star Rookies set, so the fact that it is paid homage to thirty years later is a testament to this classic design.

Here are the Topps design years of the 50’s for which I was unable to track down any Griffeys:

Join us for Part 2 of this series when we see Junior in the Topps designs of the 60’s.
Posted by The Junior Junkie at 9:20 PM