Donruss’ aesthetic began skewing more and more high end in 1992.  Check out that Design Timeline and you can watch as each design of the mid-90’s gets more and more contemporary, even adult.  Probably in the very same meeting at which this new direction was agreed upon, Donruss must have also decided they needed to offset this move by creating another set for the younger collectors - the ones who care less about gold foil in fancy cursive and high-end photography.  These kids wanted action, color, pizzazz, chutzpah, maybe even a little moxie.  “You know, for kids!” is probably exactly how this brand was pitched.  Thus Triple Play was born.

From the beginning this was a simple brand with photography that could only be described as “neato.”  There were not a lot of inserts, but it was jam-packed with relatively unique action shots, the first ever official cards for team mascots, and Fun at the Ballpark cards featuring Jay Bell milking a cow.  What fun!

Here is every* Triple Play design by year: 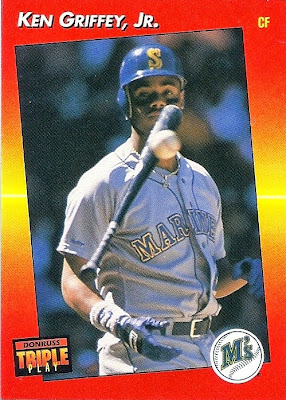 This is not the worst inaugural set I’ve ever seen.  I can see how kids would like the orange laser beam horizontal across the center flaring out to red beneath a slanted photo - kids enigmatically like lasers and uneven lines simultaneously, I get that - but when I was that age I was all about multicolored designs, rainbows and the like.  Yeah, I was that kind of kid.  Hence this polarizing, one-note, all-our-cards-are-bright-ass-orange stuff would have lost me two packs in were it not for the kooky nature of the cards themselves.  The pictures of mascots and players getting hit with pies and…..well, stretching, I guess, are all such a novelty that this set gets a pass.  It’s also one of my favorite Griffeys of ’92 because of that mysterious picture totally giving gravity the finger. 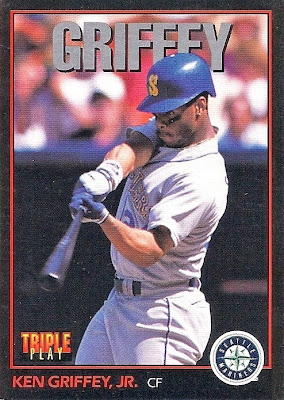 My favorite of the Triple Play base set designs, the ‘93 set is characterized by the red-accented black border and big silver surname marquee across the top of each card.  This color and design feel a lot more “cool” and grown-up.  Plus the black-red-silver combo is the same color scheme used by Dr. Claw from Inspector Gadget, and we all know that his rocket-powered flying car was much cooler than Gadget’s hokey transforming mini-van.

They upped the number of inserts this year and kept the same high ratio of kooky fun cards, including a card for new president Bill Clinton (only George H.W. Bush had received a major-brand baseball card before in the 1990 Topps set).  They also threw in color photos on the backs.  We started seeing glossy finishes on inserts, but the base set would have to wait until next year.  Regardless, this is the most distinctive of the Triple Play designs. 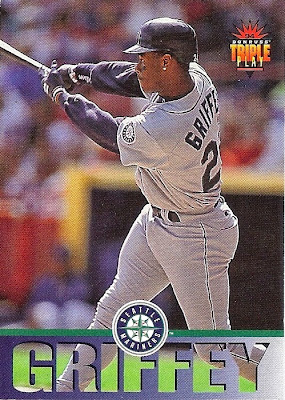 Here is another example of a set getting away from its roots.  This year they did away with the kids’ club and just made a regular set of baseball cards.  All the young’uns who were drawn in by the fun content of the ’92 and ’93 sets now had to face the reality of a set comprised of just guys playing baseball.  No pies or mascots or wackiness - just action shots.  It must have been like being given your first book without pictures.  Glossy?  Yes.  Colorful?  Sure.  Fun?  Meh….  At least the inserts started to get really cool this year.

Design-wise, the bottom-mounted name plate sports a centered team logo among team-appropriate colors that have the letters of the player’s surname cut out with a cool shadow effect.  Triple Play also dropped the border and embraced full-bleed printing for the first time, continuing the picture into the cut-out lettering beneath.  The set completely omits players’ first names which I like.  It’s a good-looking set, but it’s definitely not keeping with the original purpose of the brand.

I think that at this point in the brand’s timeline Donruss intended for TP to compete with Collector’s Choice on the low-end.  The price points were about the same; but while Triple Play’s inserts were awesome in ’94, the base set was not nearly as impressive as that of CC, nor were there any cool parallels (CC had silver and gold signature).  Ironically had some of the characteristics of the previous years (e.g. unique photography, quirky cards) been carried over to the ’94 set, TP probably would have lasted a bit longer.  As that was not the case, this would be the last set from Triple Play for 18 years.

*So that technically wasn’t every Triple Play design because it’s back now.  The brand has been resurrected under the ownership of Panini, and they’ve already released a 2012 and 2013 set.  The design has changed significantly into something entirely new, all cartoonish and logo-less.  Sadly, there are no Griffeys....yet.

Here's every Triple Play Base card of the 90's in order: