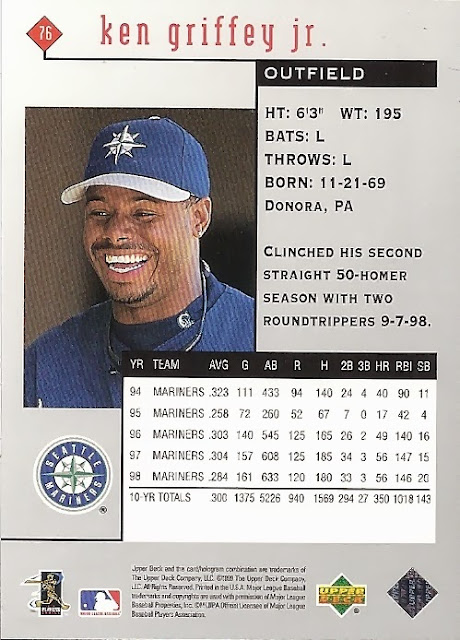 Griffey looks: deep into his follow-through

Is this a good Griffey card?  Yes.  The first of what seems to have been an attempt at another mainstay set.

The set: Let us celebrate the advent of another shiny set with a shiny name and limited comparative advantage over other sets.  The gimmick here seems to have been the serial-numbered base card and insert parallels.  I know that’s not a very unique characteristic these days, but it was much more exciting in ’99.  Plus there is not much else that stands out here.  Still, shiny!

They clearly put some effort into this set as though they meant it to hang around longer than it did, possibly as a showcase set for cool new printing methods.  As you can see the cards have that crushed foil look blended in with the backdrop that we started seeing in several Upper Deck inserts in the late 90’s, and I must admit it’s cool.  They put together a great logo, too, though I think someone at Upper Deck must have gotten the name on a ski trip.

Let’s look at the Griffey:

Junior is deep into his follow-through here.  This is a homerun machine in the aftermath of a massive impact - I mean you can really tell he just knocked the living daylights out of something, ideally a baseball.  You gotta love shots like this.

This set features three levels of colored parallels for the base cards and an Emerald parallel for each insert.  There’s even one insert parallel that is numbered out of only 2.  Yaaaay.

Here are the Griffeys I am missing from 1999 Upper Deck Black Diamond:

The set would make two (that’s right - two) more appearances in 2000 with a few more inserts and eventually a better base card design.
Posted by The Junior Junkie at 11:25 AM