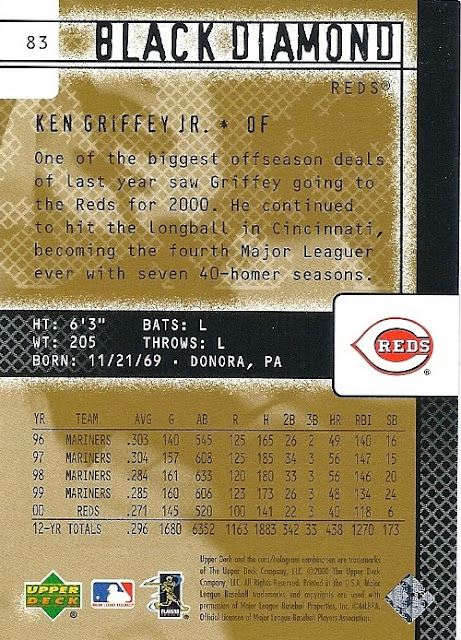 Is this a good Griffey card?  Yes.  While the set as a whole is a head-scratcher, the Griffey here is the greatest of all Black Diamond base cards.

The set: This is the second Black Diamond set of 2000, and while I do like it, this is one of those sets that makes you want to sit down and pick the brains of the guys behind the cardboard.  Who at Upper Deck green-lit this?  The focus here beyond the known players of the day was rookie cards, specifically cards and relics from the USA Olympic Team of that year.  So why "Black Diamond?"  The branding doesn't make a lot of sense, and it has made me confused and irritable.  I needed an outlet, so I made a flow chart as to how I believe this set may have come to fruition.

The snarky graph being shown, I do think the base cards in the Rookie Edition look great.  There’s a bunch of crazy nonsense in the background that I like (though can't decipher), and the dark red with the honeycomb pattern in the foreground gives the illusion of depth.  The nameplate is cool and modern, and those gold foil logos look great against the red.  And is this Griffey a bat-barrel card?  You bet your sweet bippy. 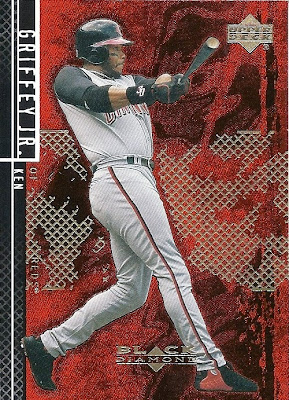 There’s our guy, swinging away, looking sharp in his new Cincy duds.  I’m guessing that was a single up the middle. 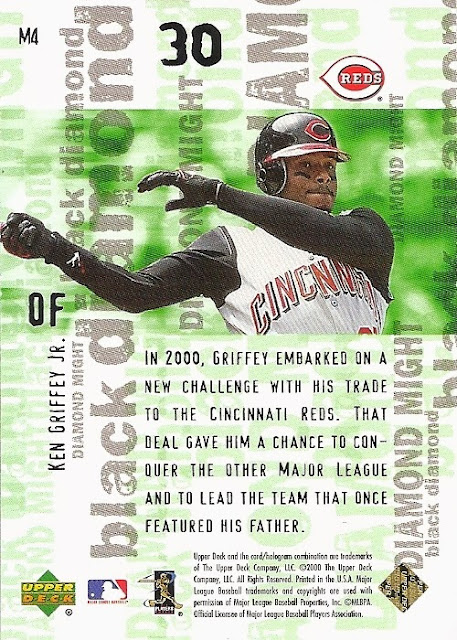 In case the originality train hadn’t gone completely off the tracks, here is a repeated attempt at the Diamond Might insert.  This very same insert had already come out only months before in the non-rookie edition BD set, and it was better.

For those of you keeping score at home, there are two Diamond Might insert sets in 2000.  Is it hard to make up a diamond-related insert?  I would think the formula would be something along the lines of add appropriate words to “Diamond” - Diamond Power, Diamond Jubilee, Diamond Force, Diamond Crew, Shine on You Crazy Diamond, whatever - then go from there.

What’s even sillier here is that the final design has nothing to do with diamonds or any theme, really.  It’s just vertical words that say the name of the brand and insert.  They could have called it literally anything mildly baseball or gem related and it would have made the same amount of sense.  It’s green, so they could have gone with Emerald Power.  Vertical Limit would have been clever what with the words being written vertically.  Or forget what the card actually looks like and call it Diamond Focus or Diamond Skills or Diamond Might (oops).  Or anything.  Again, ANYTHING VAGUELY BASEBALL-Y WOULD HAVE WORKED HERE because the design has no theme.  Screw it, let's call it call it Shiny Insert.  Throw us a bone.  We spend money on this.

Here are the Griffeys I am missing from 2000 Upper Deck Black Diamond Rookie Edition:

Just as an exercise, I decided to make a list of ten names for this set that are better than Black Diamond Rookie Edition.  It took no time at all.  Here they are in no particular order:

Upper Deck Rookie Edition - How horrible would this have been?   I wonder if it was even an option.

Upper Deck Olympic Class - You’ve got the 2000 Olympic Team referenced right there in the name.  Makes sense; and you can practically see the bronze, silver, and gold medal parallels right now.

Upper Deck Fresh Faces - Alliterative and references the rookie-centric nature of the set (sounds like a subset I may have seen somewhere).

Upper Deck the New Class - a little too TV reference-y?  How ‘bout this:

Upper Deck the Next Generation - This is genius, and I’d buy cases of this product.

Upper Deck Millennium - Simple, obvious, lots of potential for cool subsets and inserts.  How did this not get made?

Upper Deck Iron Apex - Just two words that sound kind of cool together - from my experience this is a perfectly valid system for naming a baseball card brand.  You could have real metal numbered parallels and an insert based on the heavier elements of the periodic table, and you could make analogies as to how each player’s skill is comparable to that element’s chemical properties.  Maybe something about melting points, viscosity, cards with rivets, the word “superstructure” sounds cool, a die-cut rookie set called “Under Construction” with black and yellow stripes….I’m skewing comical here, but there are a lot of different directions we could take this.

I’m going to stop myself there because I could brainstorm a thousand reasonable ideas for this one set, but my point is that card design seems like a really easy and fun job, but poorly thought-out sets still seem to make it into the market.  Does this shit not write itself?  Some sets make me wonder if the industry out of creative people, or are the card companies just not paying them enough?  How hard is it to make a cool set of baseball cards?  SERIOUSLY.  I want to know.  Because it seems really, really easy.

I don’t mean to rant.  I do try to be as positive as possible with my take on cards featured on this blog (finding fault is a lot easier than praising), but I’ll never understand how some cards even make it out of the factory let alone off the drawing board.  Black Diamond Rookie Edition and its inserts seem like a big ol’ missed opportunity, and they drive me nuts.

Let’s end this post on a positive note: Regardless of why it got made, this is definitely my favorite of the three Black Diamond base set designs.  Good on you, UD.
Posted by The Junior Junkie at 10:21 PM