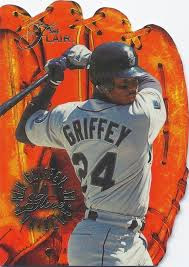 Back in 1997, if you were a pimply-faced teenage Griffey collector like me and you wanted a 1994 Flair Hot Glove, good freakin' luck. Beckett had these bad boys at 80 bucks, and the card shops of yesteryear treated those high columns like scripture.

Twenty years later, things are a little different. Not only are those same collectors all grown up with real jobs and incomes far more substantial than a $5 weekly allowance, but those Griffey cards we salivated over like so many issues of Penthouse in Dad's nightstand are now crazy affordable by 90's standards. That same 1994 Flair Hot Glove card that was so mysterious and unobtainable can be had for less than ten bucks. The same is true for a great many 90's inserts. 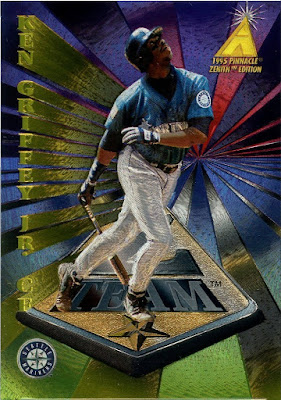 People my age are getting married later, we're having kids later, and the economy is the best it's been since many of us graduated college. We have time now. We have resources and the Internet and long memories of shiny cardboard we thought we'd never get our hands on. We have a star, a childhood hero to millions, staying 100% clean through every PED scandal the MLB has faced in the last 15 years. And he's about to go into the Baseball Hall of Fame.

I go to card shows and I meet people more or less my age who are getting back into this hobby with gusto. The first time I ever saw the famous Griffey/Mantle Dual Auto from 1994 Upper Deck in person was when a guy a little younger than myself showed me his recently-acquired specimen at a card show early this year. A month later I had one of my very own. 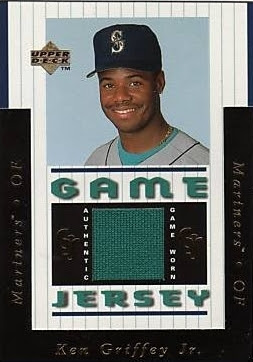 You hear stories about people re-entering the hobby after many years, a condition I can relate to. I got out of the game for several reasons. I discovered girls, then a driver's license opened up the world to me, and from there it was college, career, marriage, home ownership, more career, etc. Eventually I wasn't "going out" quite as much - I was content to stay home more and watch movies or do things around the house. Somewhere in there cards seemed to fit just right.

I suspect there are a lot more guys like me following the same arc. 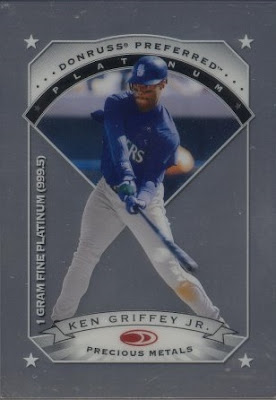 A similar formula happened with our fathers and grandfathers. They grew up and finally had some money to spend on the things they liked, and what they liked was Mickey Mantle, Joe DiMaggio, Jackie Robinson, Sandy Koufax - the heroes of their day. And what happened? "Baseball cards as an investment," the rise of Beckett, and the concept of the baseball card shop. You had thousands of buyers driving up prices on a limited commodity with zero inherent value apart from what we as a culture ascribe to it. And it's all starting to happen again.

Sure, the bubble burst. Most of those kids were leaving the market for the same reasons I did, and the Internet revealed to us just how many of some of these cards are out there. Prices were too high and a correction was needed, but you can't argue with the fact that some of the coolest, most desireable cards ever made came out of the 90's. And not only are many of those cards extremely limited, they're numbered. They have autographs and relics, diamonds and precious metals. The Internet is now doing the opposite: revealing the rarest of the rare - cards we never even got a chance to see in the 90's. Collectors want these cards, and there are more collectors every day.

Over the next 10-20 years, you're going to see 90's cards appreciate like mad. I've watched it happen just over the last three years, and I can tell you it is significant. I'm not talking about autographs from 2004; those are far too common. I'm talking about 1:300 shiny, holofoil-covered 90's inserts that were such impossible pulls when we as kids were the target market. The kind of inserts we haven't seen since Upper Deck was on Sea Otter Place and you couldn't pull refractors from every single pack.

The time is right. Griffey saved baseball cards once, and he's going to do it again. Go get your 90's inserts while you still can.
Posted by The Junior Junkie at 2:19 PM