Here is page 6 of the Great Griffey Frankenset: 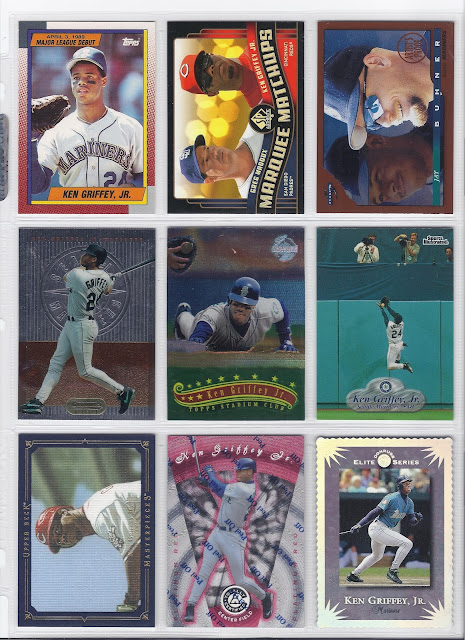 
Approximate retail value of this page: $84 ($1517.50 running total)
Page 6 notes: We have a whopping five parallels on this page - more than on any page so far. And one of those parallels is a sweet cameo. As you can see this is also the lowest page value so far which goes along with what I was expecting. As the numbers climb, the total page value should continue to fall. Any really high-value pages forthcoming (and there will be a few) will be statistical outliers. 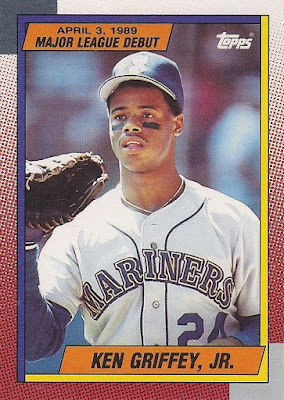 Technically this small retail set came out in 1989, but I've always classified it as a 1990 set because of the design. I've seen these advertised as Tiffany cards because of the white paper stock they're printed on, but the truth is there is only one version of this card, and Tiffany it ain't. This very early Topps issue is one of the lesser-known Griffeys to be had from that year. 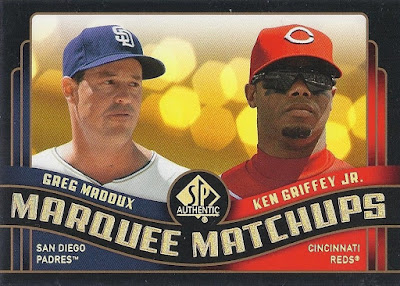 Here's two Hall of Famers in uniforms other than those of their heritage teams. Being a 90's kid, I'm all about Greg Maddux and his mind-boggling four consecutive Cy Young Awards (Randy Johnson, the only other pitcher to accomplish that feat, also has a card in this set with Junior). Griffey had 34 at-bats against Mad Dog in which he hit .294 with two home runs. A much younger Junior than the one you see on this card also managed to homer against Maddux in the '92 All-Star Game, the first year of Maddux' Cy Young run. By the time this card came out, both were late-year veterans on the verge of retirement. 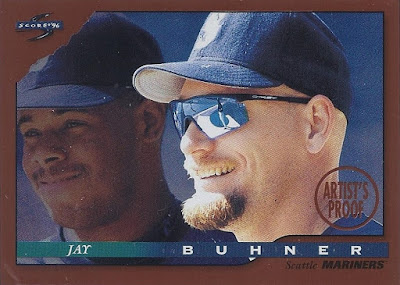 Nobody has more cameo cards with the Kid. These guys shared the outfield of the Kingdome for 10 years, and they were genuine pals. This is one of my favorite candid shots of the two, and it won't be the last in the Frankenset. 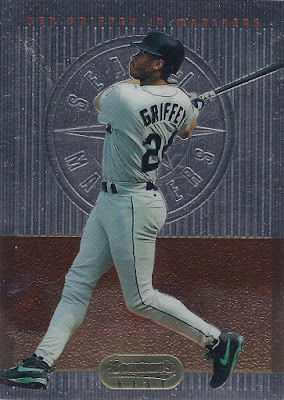 I'll be honest - I was conflicted with this selection. There just aren't many Griffey cards numbered #49. This is the first time in this Frankenset I had to settle. Nothing against Bowman's Best (I love the giant chrome team logo), but this is hardly my favorite card. Maybe if I had the refractor version... 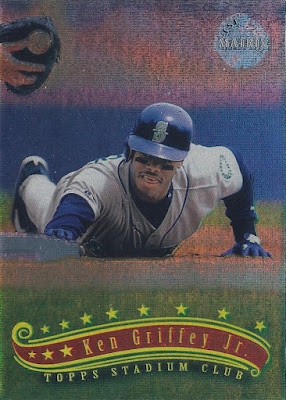 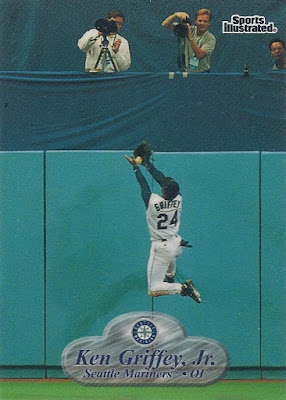 Yeah, this one is all photo. I love how far away we are, I love how it's just a tiny bit out of focus, I love the photographers with massive lenses trying to capture the moment, I love all the negative space and the realism. It's like we're sitting in the stands. Just an excellent card. 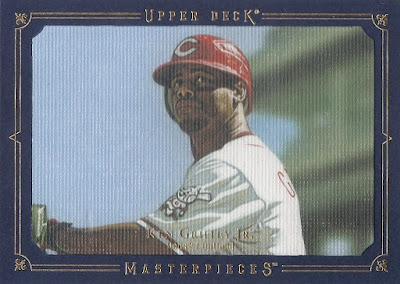 It's a nice parallel of UD Masterpiece, perhaps the most appropriately-named set ever made. The image is simple: an up-angled portrait with some beautiful interplay between sunlight and shade, the lumbering upper deck of the stadium in the distant background. Everything else is clear blue sky. Also there's a big, blue frame on there which is pretty neat, I guess. 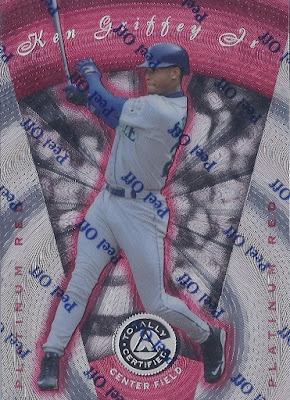 Scans don't do this crazy card justice. I won't go into all of it here, but believe me when I say it absolutely attacks your eyes from the front and back of the card with numerous little design elements, the most prevalent of which is a series of multi-angled bands of foil in a circular pattern radiating from the brand logo (you can kind of see them in the scan here). I can only imagine the retinal damage that would result if I bothered to peel off that protective coating. 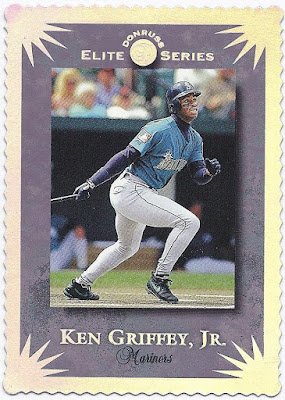 This year for the first time Donruss went die-cut for their Elite Series, and we ended up with what I consider the elite-est of of all the Elite Series inserts. Of course this set would eventually evolve into its own high-end brand with its own aesthetic, but to me it never looked better than it did in '95. 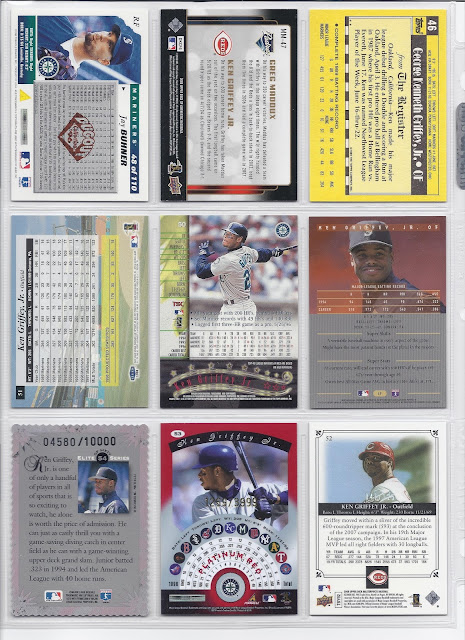 Thanks for reading, and look for page 7 next Friday!
Posted by The Junior Junkie at 8:30 AM