I got a package from Adam of My Cardboard Mistress a few months (years?) ago that incuded a few cards from one of the more controversial sets of cards ever made. More on that later - let's peep some Griffeys! 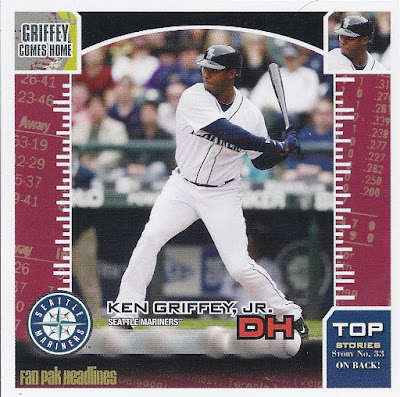 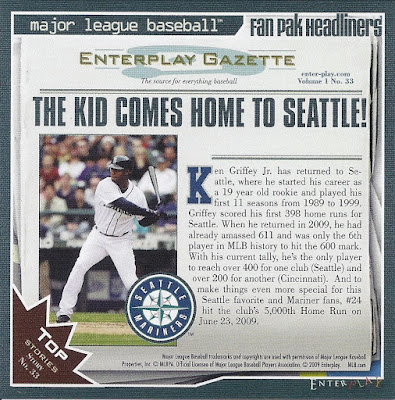 Oddballs are one thing, but modern oddballs? Those are the absolute best. A few different ones popped up in the market when Junior returned to Seattle. I had never seen any of these big, square jobs from Enterplay, and apparently there are a bunch because this appears to be #33. Anyone else ever come across these? 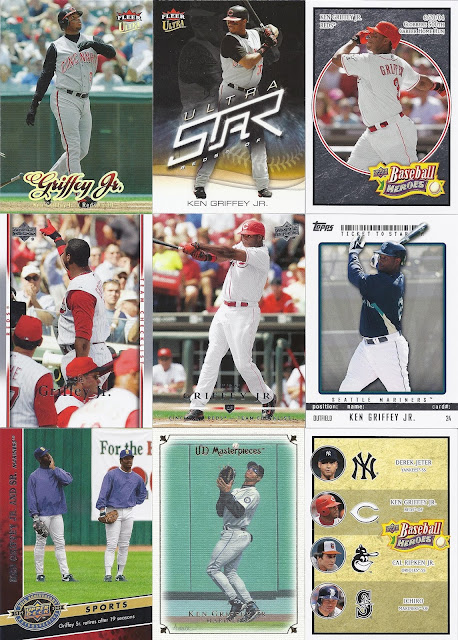 Adam also included a bunch of great late-2000's Griffeys. You have to admit UD cards were still pretty cool even right before the demise of their baseball product. 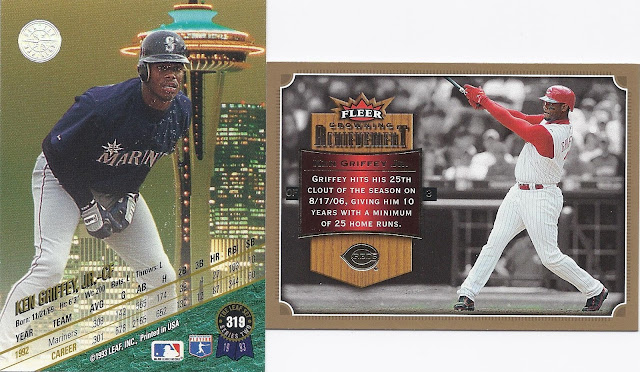 And here's one of my favorite card backs of the 90's beside a beautifully-designed Fleer insert. Some solid Griffeys here. 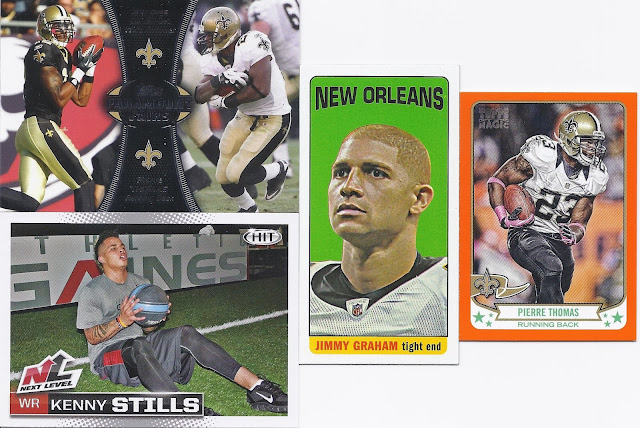 I am nuts about Topps Magic which is only made for football at this time. I've even been tempted to pick up a few packs of the stuff despite not actively collecting football. It's a great-looking set. The Jimmy Graham card is extremely cool but bittersweet considering he's now a Seahawk, and an underperforming Seahawk at that. Kenny Stills' medicine ball workout shot is the winner here. Good on you, Next Level (is this a popular brand? why does it say "hit" in the top corner? do they indicate which cards should be considered hits? do they have a license for logos? is this an oddball? so many questions...). 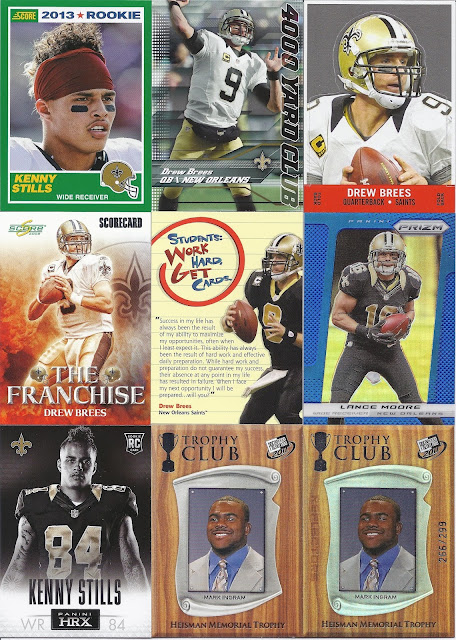 That Panini rookie for Stills is gorgeous. Reminds me of Studio. I also love those Score throwback design rookies. Man, football has some really cool cards. 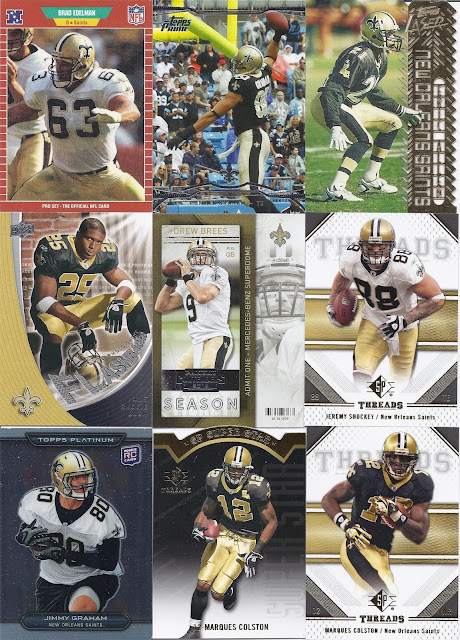 Topps Laser?! I had no idea that was made for football, too! And despite recent unpleasantness, that shot of Graham "dunking" the ball through the goal post at Carolina is one of my favorite cards from this package. 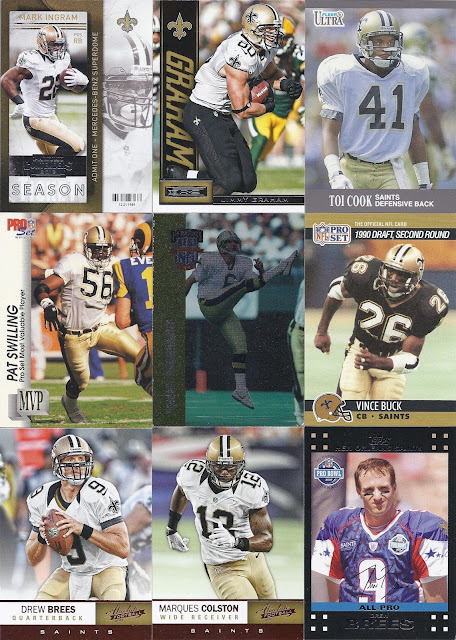 I'm going to do an impression of every announcer for a Monday Night game that involves the Saints. Ready?

Intersplice shots of the dilapidated Superdome, helicopter footage of a flooded neighborhood, and Drew Brees hammering a nail into a 2x4, and that's pretty much it. Oh, and if they show the picture of Sean Payton asleep on a plane cradling the Lombardi Trophy, you have to finish your drink. Also, prepare to finish your drink, 'cause they're gonna show it. 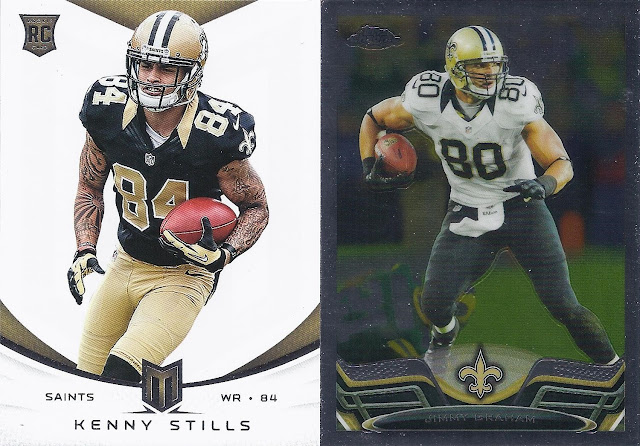 Lots of Stills and Graham cards in this here package. I pretty much never get to see football designs - I usually walk right by them at shops and shows, so having some of my very own to flip through and study is always welcome. I keep any and all Saints cards. 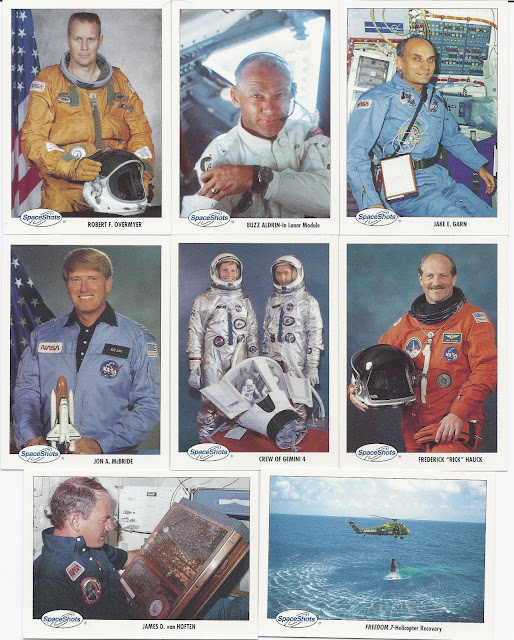 A dark cloud hovers over the still-excellent Space Shots set from the early 90's. The wikipedia has an extremely watered-down version of what went down if you're interested, but there's more discussion about this available online if you're a digger, which I am. Damn shame. The cards are great, though. Backlit Buzz on the top row is a personal favorite.

Thanks for the excellent cards, Adam! I'm looking forward to our next trade!﻿
Posted by The Junior Junkie at 10:06 AM