Welcome to The Great Griffey Frankenset!
If you're not familiar with the idea of a Frankenset, it is a customized set of cards properly sequenced by card number that all tie into a connecting theme. Some Frankenset themes include whole teams, mini-collections, and even just generally great cards or photos. This is the first Frankenset I'm aware of that is made up of just one player: Ken Griffey, Jr., the man of a million cards. I took the liberty of including things like inserts, parallels, cameos, and oddballs for the sake of variety and because it's just more fun that way. Enjoy!

Here is page 4 of the Great Griffey Frankenset: 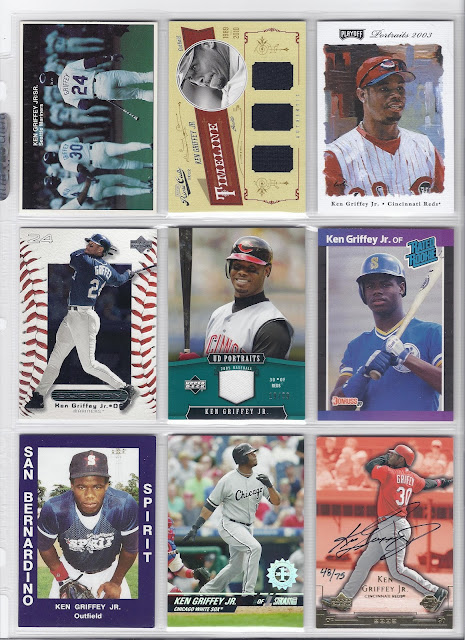 Page 4 notes: A lot of firsts on this page. Here we get the first relic, the first autograph, the first card with Ken, Sr., and the first page with more than one Reds card. Heck, you even get a White Sox card on this page (I tried to include White Sox cards as often as I could - there just aren't that many). This page also runs the length of Griffey's career with a card from way back in 1988 and another from as recent as 2012. But best of all, I feel like this is the first page that gives you a real sense of the fun variety of Griffey cardboard that was my goal for this set. Who would have imagined that these cards would ever appear together in the same binder page. And that they would be in perfect order when they did? 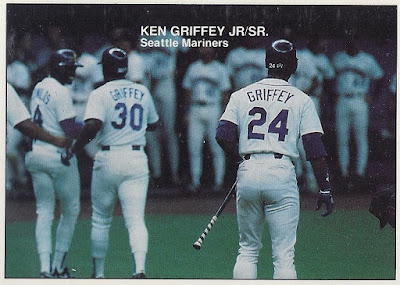 Here is a regional branded oddball from Country Hearth who I believe make bread products. Maybe they make the buns for Kahn's quality meat hot dogs? Anyhoo, it's a very different shot of Junior and Senior on the same field in the same uniform. I love how we can see both names and numbers on the jerseys and the team standing in a row in the background. Clearly Senior just returned home from a round-tripper, and Junior is stepping up to the plate. Could this be the night of the legendary back-to-back home runs? Even if it isn't, this photo shows us a great moment symbolic of Ken, Sr. wrapping up a long, successful career as Junior stepping up to start his own. 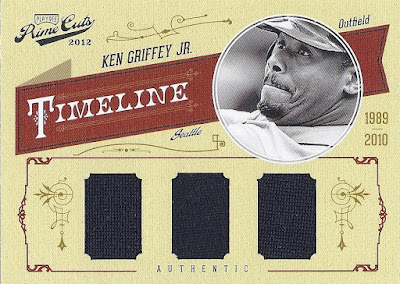 I like jersey relics - I don't really love them. But I will admit that sometimes the design and layout with the relics is just right, and that relic card really pops. That's the case with this triple relic from 2012 Playoff Prime Cuts. I'm into it. The fact that there are only ten is just icing. 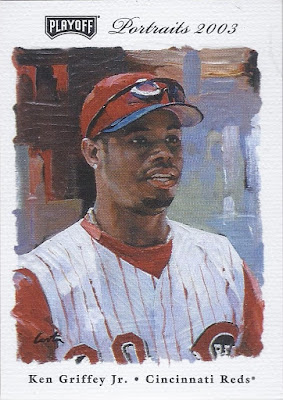 It was between this and another older but rarer 90's Mariners card. I enlisted my wife to help me choose one, and this is the one she went with. Didn't even take her long. The other card was really sweet, but I think she picked right. This is one of the great Griffey "art cards" with its tangible simulated brush strokes. 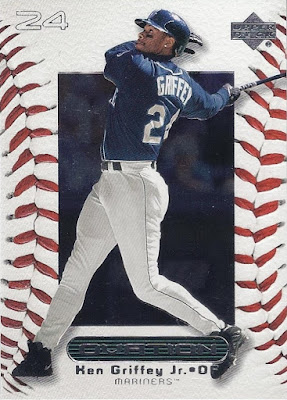 I love this base design. It reminds me of one of the big inserts from when I was a lil' collector, 1995 Leaf Statistical Standouts, a card I only recently acquired undamaged. The big black box behind Junior is clunky, but it's still a looker. There's also a Reds version from this very same set. 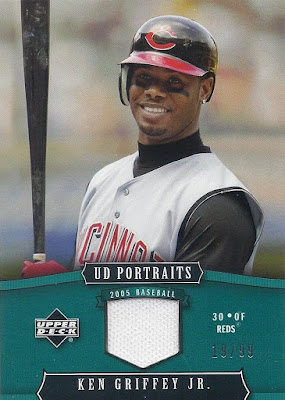 Another relic, this one also very limited in run. I'll admit that the relic and low number did enter into this one getting picked, but so did that excellent portrait. What else should we expect from a brand called "Portraits?" 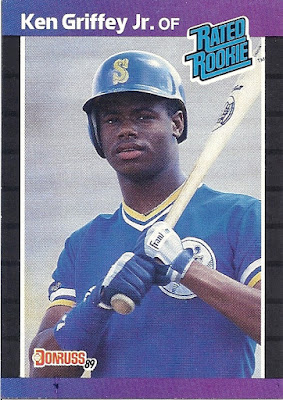 The card that got me into Griffey, the first card that I ever busted packs to get, the first Griffey I ever owned, and the orangest-backed card probably ever-ever. All politics aside, if Griffey rookies were Democratic candidates, the Upper Deck #1 would be Hilary Clinton. Old #33 here would be Bernie Sanders - never going to win, but still somehow super popular with the regular folks. 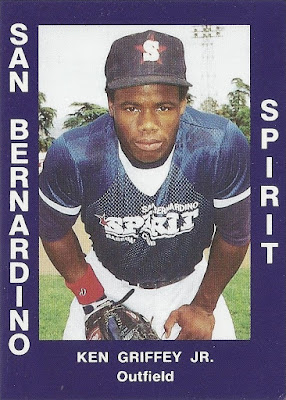 There are two versions of this card, and this is the real one. The one featuring an out-of-focus action shot in a white jersey is a Broder. I'll level with you here: I think this card is ugly as sin, but I really dig the photo. And it was still better than every other #34 I had to choose from. 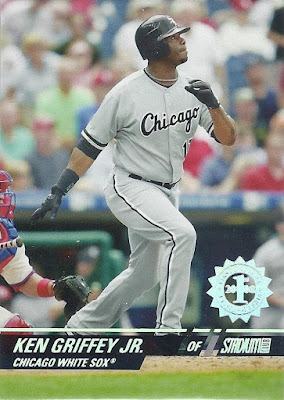 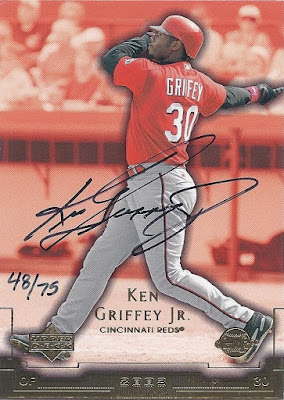 This card is both my first buyback and my first hand-numbered auto. I've always been a fan of this set's base card design, and when the buyback came up for sale on eBay a few weeks ago for way too cheap, I was quick to pounce. The only thing I'm not sure about is what set this card was included in. Was it a buyback that was inserted into Ultimate Collection packs from later years? Or did Upper Deck have a bunch of base cards signed before putting them into 2003 packs? Whatever - it's #36. That's all I'm worried about for our purposes. 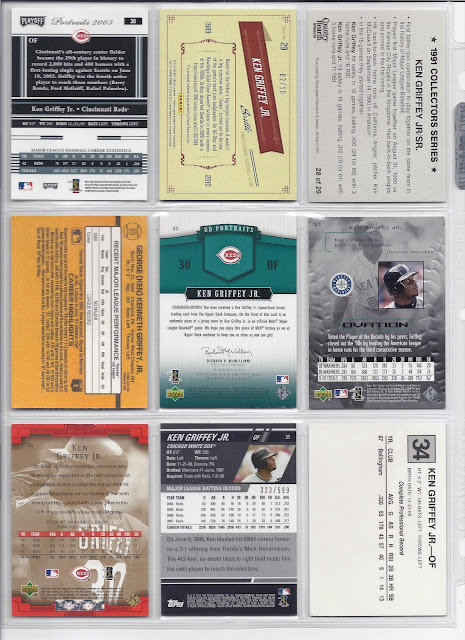 Thanks for reading, and look for page 5 next Friday!
Posted by The Junior Junkie at 8:30 AM