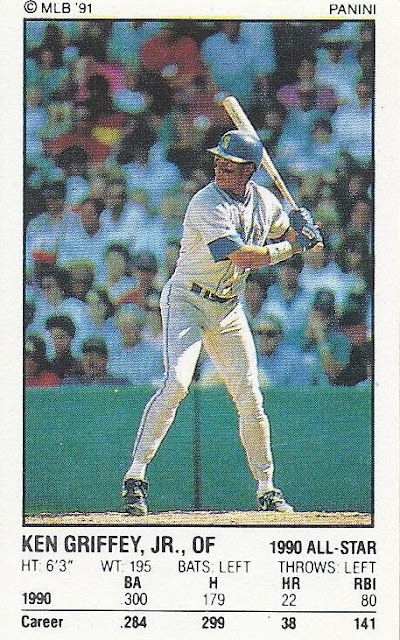 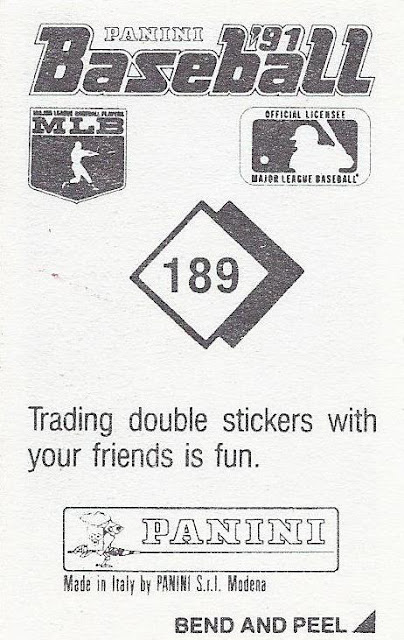 Is this a good Griffey card? Yes.  It's from Italy which cannot be said for many baseball cards anythings.

The set: There's not very much to this set.  It's a very nice color photograph for a sticker.  It's printed on extremely thin stock - thinner than most computer paper I use.  There is an abbreviated stat line on the front and some basic information about the player - Griffey's card notes that he is a "1990 All-Star."  With all that, the front of this card resembles a generic card back.

The back of this card tells us that "Trading double stickers with your friends is fun."  I agree, unless we're talking about Griffeys in which case I jealously hoard all the stickers and strike like a cobra at anyone trying get their grubby little paws on them.  The back also tells us to "bend and peel."  Ha ha ha NO.

So is this an oddball card?  After much deliberation I decided it was not (despite the cute title) and gave it its own post.  Here's why:

First, Panini had already been making baseball stickers for several years when this came out, and they would continue for years after.

Second, Panini made sports-related memorabilia exclusively.  This is not a maker of frozen pizzas or soft drinks putting out a promotional item.  Sports memorabilia is all they do.

Fourth, they are still around today.  They even have the same logo they had back then.

Finally, this bad boy is officially sanctioned.  It's got the logos and pedigree of a real, honest-to-goodness baseball card.

I mention these guidelines here because Griffey has an absurd number of oddballs out there and I'm going to start posting them soon a few at a time.  Rules must be in place for proper oddball classification.  Input is welcome in the comments below.

In the meantime, let's get another look at that Griffey: 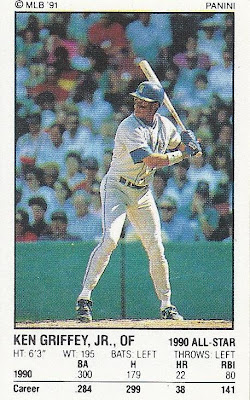 This must be an early afternoon game as the sun is hitting the field just right.  As the guys who printed this card would say, Griffey looks molto bene.

I love shots that show a lot of faces in the crowd.  This one is a little too small to get the full benefit, but I still find myself hunting for the inevitable one guy picking his nose (bottom-right corner in the hat - unconfirmed).