If you read his blog (and if you read baseball card bloggery, it's more than likely you've read his) you probably know Dime Box Nick has a lot of collections.  It tends to be very easy to find cards for him.  I am always building stacks for various trading partners, and Nick's always tends to grow the fastest.  In that sense I tend to send Nick large quanities of cards that meet his collecting criteria.

In fact, everybody sends the guy so many cards I often think they are more of a hindrance, impeding his ability to collect efficiently.  Then I remember that this guy has more love for cardboard than pretty much anyone else I've ever come across and I'm like "Psh.  Whatever.  He loves it."

Anyway, Nick sent me a mix of cards recently that, while they wouldn't completely fill a Priority Mail box, are all quality additions to several of my own varying collections.  I'll start with my favorite card of the lot:
﻿
﻿

Nick called this a "cameo" card.  That is a much better word for it as I have been calling a "surprise" card.  Cameo makes a lot more sense.

This card and I have a history.  When I was in high school I was in the baseball card club, and everyone seemed to know I was the Griffey guy (probably because I would trade at a loss to get Griffeys).  Kids would all bring their Juniors to me for trading, and one day a guy brought me this Jody Reed Stadium Club card featuring Griffey going down at second in the midst of a double-play.  He also had a few other Griffeys I ended up trading for (I remember one was a '94 Stadium Club Electric Parallel).

I immediately dismissed the Jody Reed.  Little did I know that several times over the next many years (and more fequently over the past few months) I would think back to this card and wish I'd snagged it when I had the chance.  I could no longer remember the player or even the set it had come from.  That is, until Nick included it in this trade package.  When i saw it I knew immediately that this is the one I had passed on over 15 years ago.  Hence, this is definitely my favorite card in the bunch.

A close second is this guy: 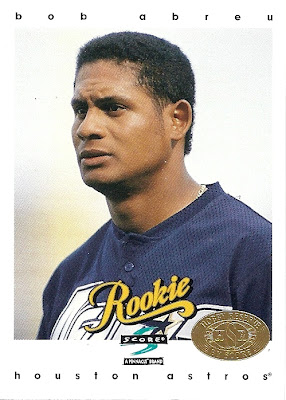 No, I did not have a stroke.  This was in a penny sleeve that read "turn over" in Sharpie.  Lo and behold: 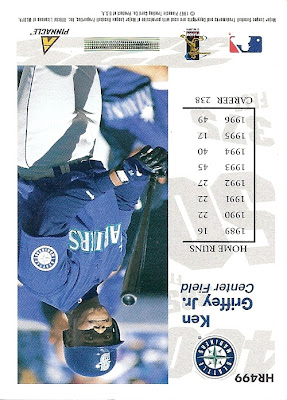 A totally amazing error card!  The error back is printed upside-down, so that's not a blogger error you're seeing.  It's like a double error and a parallel to boot.  Great surprise. 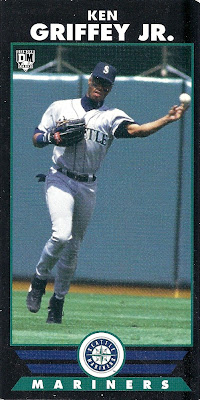 This one is from the Barry Colla Photography collection which you may have come across if you've collected modern-age cards for long enough.  From what I can tell this is a sports photographer who formed his own company and started making individual player sets.  This particular card is touted as a bookmark.

I used to consider Colla cards oddballs, but over the last few months I've seen enough of them pop up that they could be more legit than I thought. 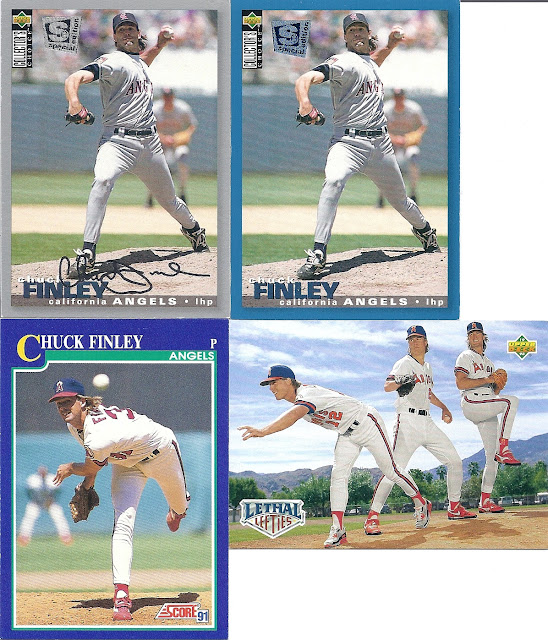 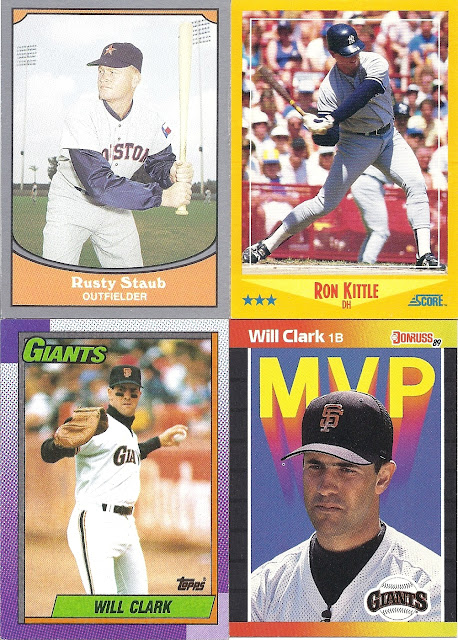 Nick hit every baseball player collection I have - even the oft-overlooked Rusty Staub.  That Staub, the Chuck Silver Sig.  That '88 Score Kittle is a great picture, but it also kinda looks like he's giving birth to the on-deck guy. 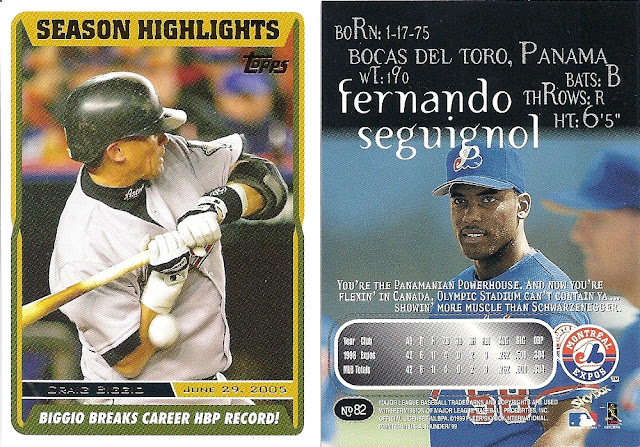 This Biggio ellicited an audible "wow" when I saw it just because the subject matter is so bizarre - what a wacky record to hold and make a card to commemorate.  That Fernando card ellicited another "wow" because they tried to rhyme Schwarzenegger.  Skybox, I frickin' LOVE/HATE/LOVE you so much. 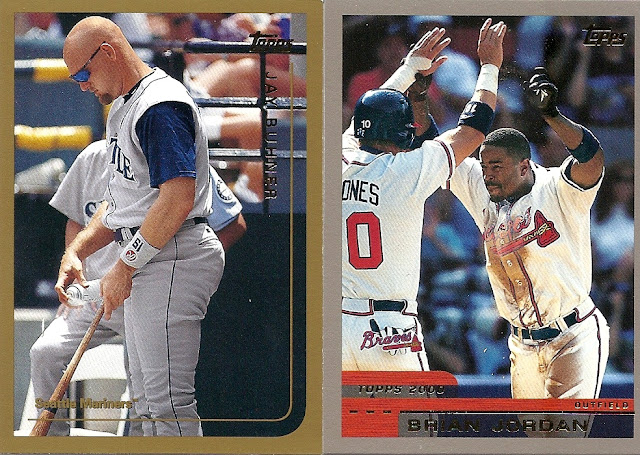 Buhner is definitely another unsung PC of mine, as well as Chipper Jones who makes a cameo in this great Brian Jordan card. 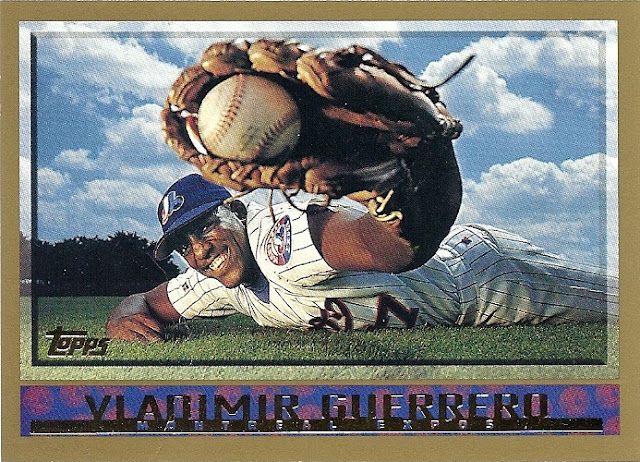 I've always held on to Vlad cards, too, though I still don't really consider him a PC as much as some of the other guys mentioned in this post.  This one here is a card I've seen on Nick's blog in the past that I've drooled over: colorful, perfectly balanced, fun and full of character, a well-put-together card in every way.  Maybe lose the gold border, but everything else is solid.

Here we have pitcher at the plate Jim Abbott who for some reason turns up on Griffey cards all the time - don't ask me why.  Tekulve's glasses are legendary among those of us who collect bad pictures, and Warren Spahn is apparently super flexible. 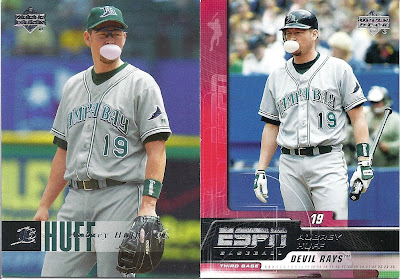 Players blowing bubbles, another small collection of mine. 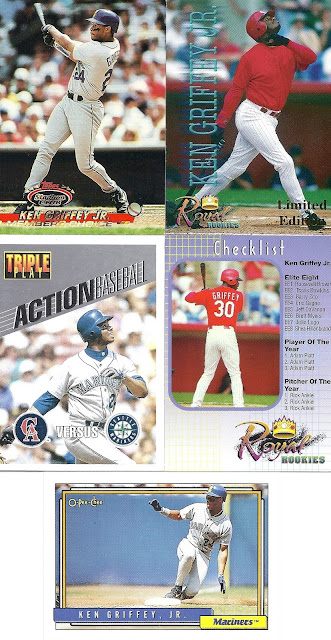 And finally a nice bunch of Griffeys.  That Royal Rookies checklist is new to me, and I've always been a big fan of '93 Stadium Club.

Nick has one of the best blogs out there and a love for the hobby that borders the unhealthy.  Plus it's a great read - check it out......
Posted by The Junior Junkie at 2:03 PM