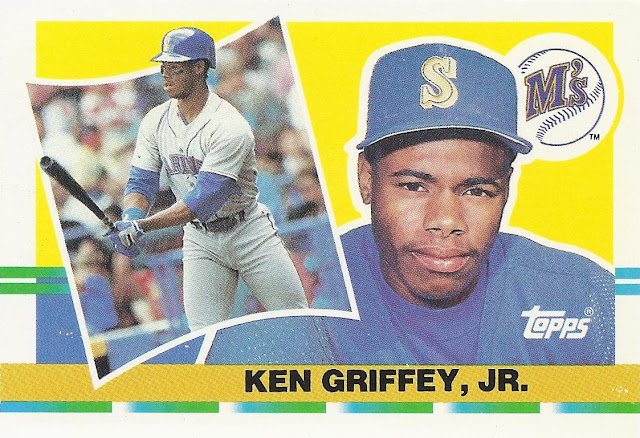 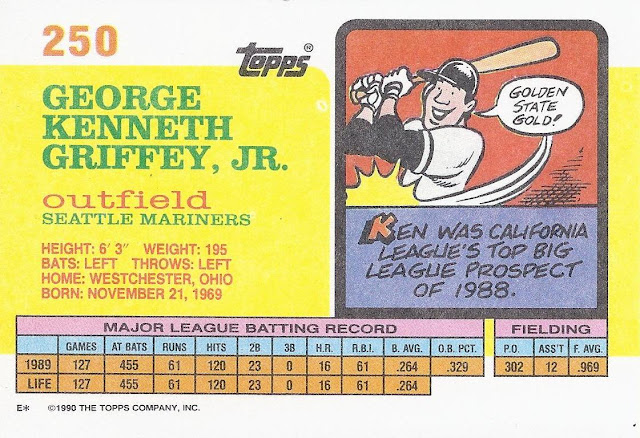 Is this a good Griffey card? Yes, despite the fact that the gimmick of slightly-larger-than-normal cards makes collectors insane with rage.

The set: I have never seen a completed set of Topps Big.  I have to wonder if anyone out there is masochistic enough to try.

Small cards are huge right now (ironic, no?), and no one is going to complain because they fit into cases and sleeves and pages and boxes and pretty much everywhere you can put regular cards.  Sure they rattle around in there, but at least you're not getting finger grease on them.  At least they're not sticking out of the top of the case getting all bent and soft-cornered along the top edge only - looking at you '89 Bowman.

Then again, '89 Bowman could still fit into an irregularly tall top loader.  They would get precariously close to the top edge, but they were in there.

Cut to Topps Big, which at 2 5/8" by 3 3/4" is too tall and too wide to fit into whatever cases you already own because top loaders size-discriminate worse than Ambercrombie and Fitch.  Hey, kid - you want to keep that Jim Abbott card from getting all dinged up by the world?  Get your Mom to drive you to the card shop for some irregularly-sized cases.  Oh, and by the way, the next size up is way too big for that card, so you're going to have to find a spot to store those cases as well.

Or you can just throw the stupid card away and move on with your life, an idea that seems plausible until you remember that the promise of future baseball card values has made you into a pre-teen hoarder and you can't bring yourself to throw it away, so you just keep it sideways in a white box with all the other oddball-sized and shaped cards that have no justifiable storage space in your collection.

Then 12 years later you open said box and see that Jim Abbott card and all you can think is, "Oh, God.  Those stupid things.  This card used to stress me out like crazy.  Baseball cards are evil."  After that you go to the backyard to burn the card in an attempt to cleanse yourself of all the organizational dysfunction it has caused in your adult life, but you still can't do it because you underestimated the deep-seated psychological trauma that is now rooted firmly in your psyche from this card not having a place in the world, so you clutch the card firmly to your chest and rock back and forth on the lawn, crying into the night "I must protect you, cardboard orphan, until your Beckett hi-value grows strong.  You're gonna make papa proud someday," and back into the white box it goes.  Then decades later you die of a sudden brain aneurysm and your family finds the box stuffed into a closet, opens it up, recognizes the contents as worthless, and chucks the entire thing into the trash.

All that being said, this set has a cool classic design that I really like.  Both the front and back are bold and colorful; and like the 1988 set of the same name and dimensions, all the cards were printed horizontally which works well with the size.  And you've gotta love the inclusion of both an action shot and a portait on the card front.

With all that great space, I would like to have seen more stats or a nice, big blurb full of cool information.  Topps decided to go with a cartoon, which is cool.  I'd prefer it showed Griffey instead of some white guy, but whatevs.

Speaking of the Kid: 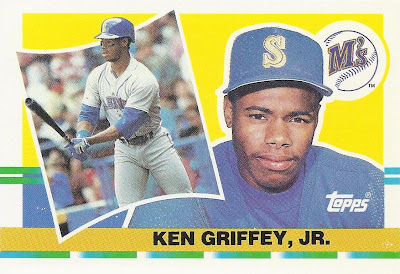 Griffey looks so young here.  If someone showed me this picture without the M's cap, I wouldn't have guessed it was Griffey at all.

After graining it up for a vintage look, Topps re-used this picture in their 2007 Topps '52 Debut Flashbacks set.  Here it is: 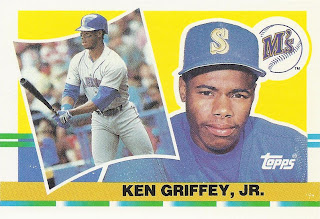 Topps Big would have made more sense if the cards were, say, 4" x 6" or 5" x 7".  Then at least you could put them into a picture frame or something.  As it is, that couple of extra millimeters made the set a cruel joke, and I hate it to this day.

And I still don't know who the white guy on the back is.  Paul O'Neill?  A.C. Slater? 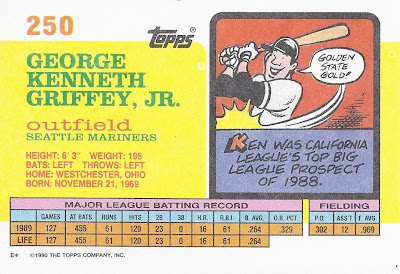