[Note: for some reason Blogger is not centering all the pictures and it's making the post come out al weird structurally - sorry.  Also, the concert ticket put up for grabs at the end of this post has been claimed.  Thanks for playing!] 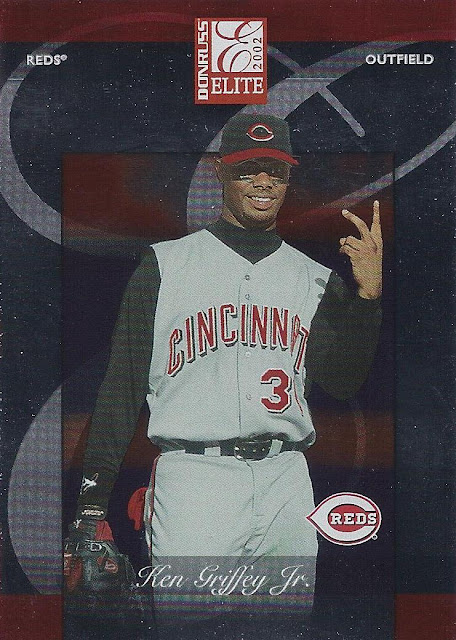 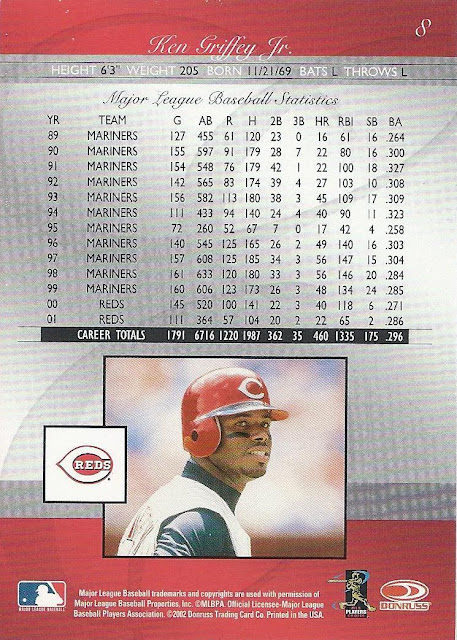 In my collection: 2 regular

Is this a good Griffey card? Yes.  Homeboy is chunking a high-end deuce of supreme shininess.

The set: It may not come out in the scan so well, but the finish of this set is relentlessly mirror-like.  I don't usually like the shiny finish but Elite got it right this year - it reflects light tenaciously and without apology.  It also features the player name in that great script font found in several Donruss/Leaf sets of the time including one of my all-time favorites, Leaf '95.

The design here puts a lot of stock into the giant script E, so huge it can't even fit on the card, that we are supposed to associate with this high-end set.  I've never been a fan of brands using self-referencing as design elements.  Indulge me for a moment, gentle reader:

Every Holiday season Lexus runs these commercials of upper-middle class suburbanites giving each other Lexuses (Lexi?) with big red bows as presents - super practical, right?  The commercials always feature the infamous Lexus Holiday jingle, the same one they've been playing for years.  This past December (and November, and probably some of October) the commercials depicted couples finding unique ways to play that song as a clue that they were giving someone a Lexus.  In one a family gives a Mom a jewelry box that plays the jingle at which point she realizes what it is and runs outside because obviously she is getting a new Lexus.  A couple is in the elevator of their apartment building and the song is playing in the elevator, and the wife turns to her husband all excited because obviously this means a new Lex is waiting for her downstairs.  Lexus' ad agency now thinks that we know that song well enough to associate it with a new Lexus, a point completely lost on my sister.

You see, my sister (who is a little older than me) and I were watching one of said commercials this past year, and when the jewelry box recipient mom got excited and ran outside to see her new car, my sister said to me something along the lines of, "Wait - how did she know there was a new car outside?"  I replied, "That was the Lexus Holiday jingle.  She knew from the song."  It was then that I realized that I'd been had.  The campaign had worked.  A self-referencing ad just proved to me that I watch way too much television.  Perhaps I should start using my time more constructively by, say, starting a blog (see what I did there?).

Such self-referencing is happening on the front (and back) of this baseball card, and I'm against it as a design element.  It's not a bad look, but does it have to reference the card brand?  True, Elite had been around for a few years at this point, but are we as collectors supposed to look at it and say "Ah, yes, the great E of the Elite.  Such a fine specimen is this.  It says to the world 'My taste in cards is quite impeccable, is it not?'"  It couldn't be a big G for Griffey or his uniform number or just about anything else?  Is anybody really that enamored with this set?

Rant over.  Let's take a look at that Griffey: 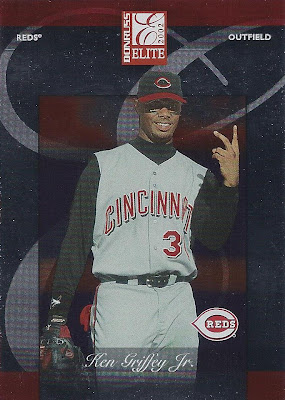 ﻿﻿
﻿﻿Here we see Griffey doing a little fancy deuce chunkin'.  The shininess of this set accentuates the excellence of said deuce.  Hey, Junior!  What's the candlepower of that deuce?  Two?  Hm - seems like more.

This is another 2002 Donruss set that omits Griffey from its inserts.  The only cards Griffey collectors have to chase here are parallels.  Here's all the parallels I don't have from this set:

Those Chicago Sports Collector Convention cards keep popping up in early-aught Donruss sets.  They all seem to be #/5.  They're not makin' it easy......

Tonight is Father John Misty live at One Eyed Jacks.  His solid album Fear Fun is one of my favorites of 2012.  I have an extra ticket, so if you're nearby and want to come along, shoot me a comment below....  Because let's face it, if there's anything in this world that says party, its Thursday night and talking about baseball cards.  Woooooooo!
﻿
Posted by The Junior Junkie at 11:41 AM