1999 Pacific Invincible: Not for Vinces 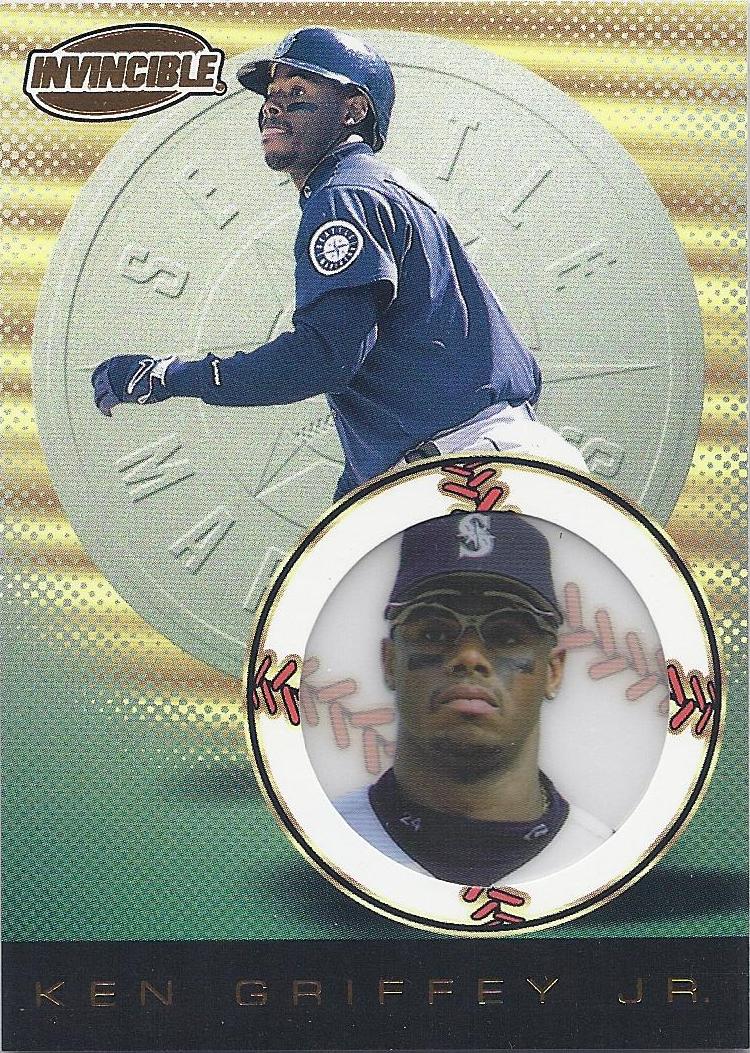 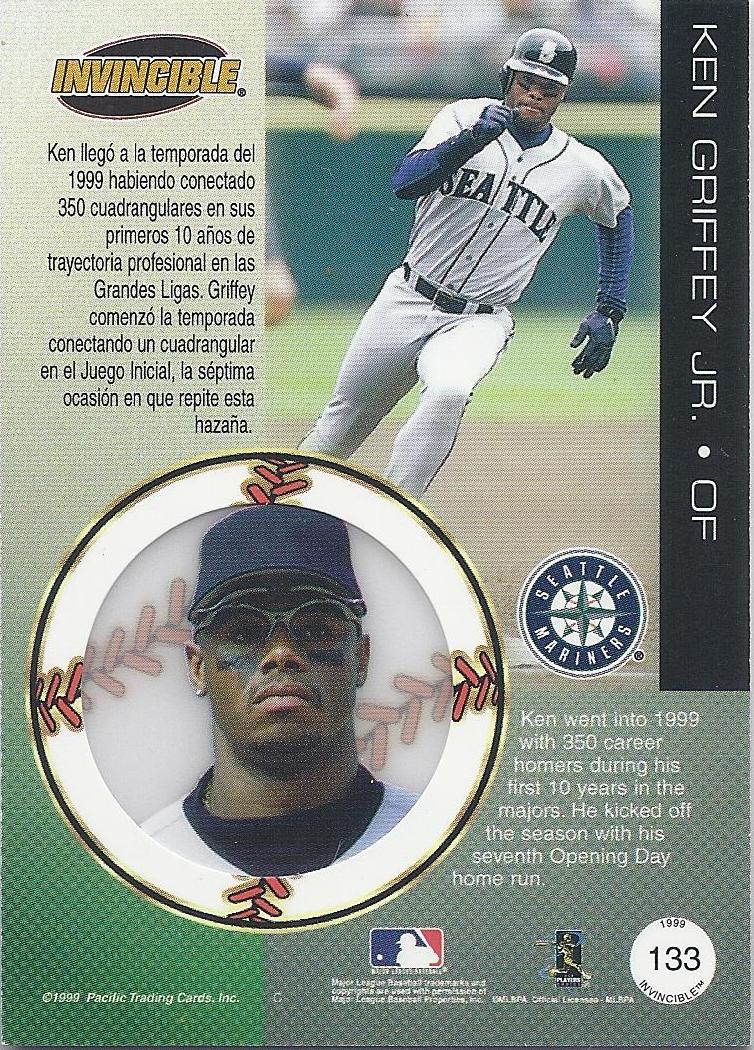 Is this a good Griffey card? Yes.  Flipped-up shades and a tongue both on one card = must have.

The set: Pacific is weird, man.  By that I mean trying to assemble this post gave me blogger's block.  I really had no idea where to even start when it comes to covering Pacific cards, and yet here we are.  This post is the blogging equivalent of spinning a globe and stopping it with your finger - we landed on '99 Invincible, folks, so that's where we're going.

One thing I do know: whatever you do, do not give these cards to Vince.

They're In-vincible.  Besides, guy's a douchecanoe.

Pacific always seemed like an oddball brand that had somehow become wildly successful, and Invincible is no different.  Just look at the cards: they don't look like they came from the same set at all.  Some of those inserts came in two different versions for no apparent reason.  The designs lack cohesion in just about every element.  It's like pulling teeth just trying to figure out what the card you are holding is called.  Every insert looks like a base card from a set entirely independent of the other cards.  Busting packs of this set must have been like opening a $4.99 Target repack - you could end up with just about anything from any set, but probably nothing very good.

Case in point: here are the Griffeys: 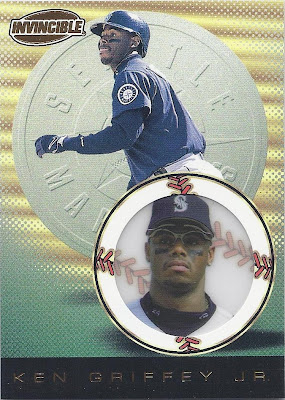 Flipped-up shades plus visible tongue = yikes.  It also means I totally love this card.  For some reason it is more expensive than most of the inserts, I guess because it seems more like an insert than the inserts do.

There's a circle of translucent plastic with a Griffey image in it.  I don't know why - it's just there, ya know?  So weird.  Some bigwig at Pacific must have been like, "We have mastered the translucent plastic circle technology.  Let us unleash it unto the world in....oh, I don't know...1999......In.....vincible?  Sure, that works, whatevs.  Just make sure it is aesthetically unrelated to every other card in the set." 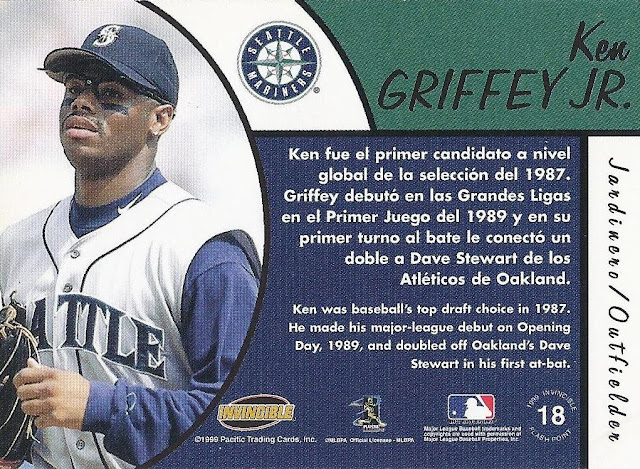 No cool theme or visual effects here - just some Times New Roman font thrown together with a little foil.  This is not the base card.  This is an insert called Flash Point.  Would you have guessed that was the name in a million years?  Heck, no.  It does have flipped-up shades, though.  I'd have called it Flipshadepoint.  That would have made more sense. 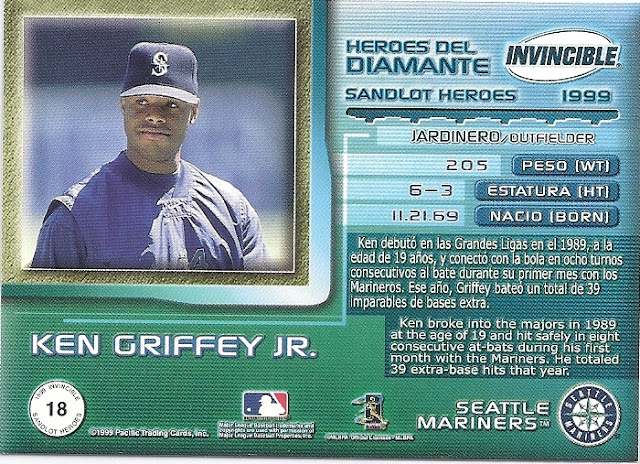 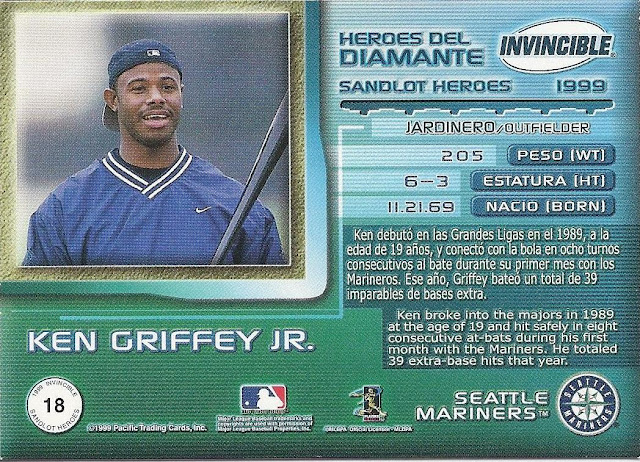 That's Sandlot Heroes, cards A and B.  It's not a bad-looking set, but why A and B?  The only difference between them is the pictures used - A has no tongue, B has lots of tongue.  The blurb is the same, the layout, even the numbering.  It's strictly a matter of tongue or no tongue.

I'd also like to say that my Sandlot hero is James Earl Jones.  He was great in that movie.

﻿﻿
﻿﻿
﻿﻿
﻿
﻿﻿﻿﻿
It's pretty cool having baseball cards appear in both Spanish and English.  Apart from that this insert is ugly and stupid.  It's got almost nothing going for it.  Lucky for us, there are two versions.

Here is where things get confusing: I see tongue on the front of both those cards.  It protrudes a bit more in card A and is definitely funnier there.  The tongue in B is more incidental, so that would lead me to believe that is card A; but no, it's B.  So, when deciding which insert is which, just follow this simple rule:

When dealing with Ken Griffey, Jr. cards from 1999 Pacific Invincible inserts "Sandlot Heroes" and "Seismic Force," the card with visible tongue is always card B unless both cards have visible tongue in which case the card with the less prolific tongue is card B.  The card that is not card B will always be A.  Give neither card A nor B to Vince.  He is a douchecanoe.

There.  Memorize that and you'll be good to go.  Aren't you glad I researched this for you?  This is my life now.

Here's all the Griffeys I don't yet have from Invincible '99:

Again, this set as a whole is really weird.  It's like Pacific took all the throwaway designs from their other sets and mashed them all together into a single set.  It feels very ramshackle.


But don't think that will dissuade Vince from trying to get at them - not even for a moment.