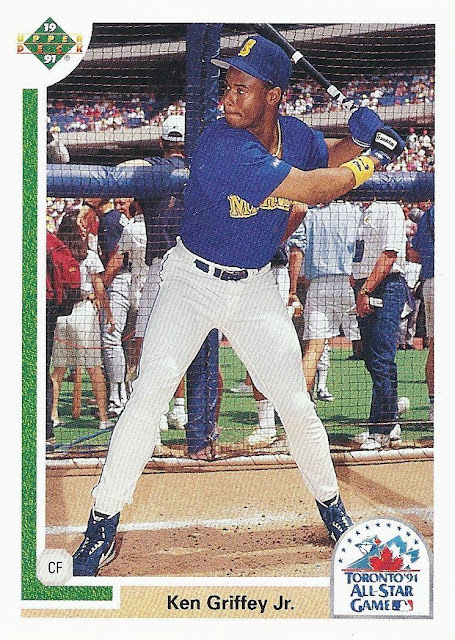 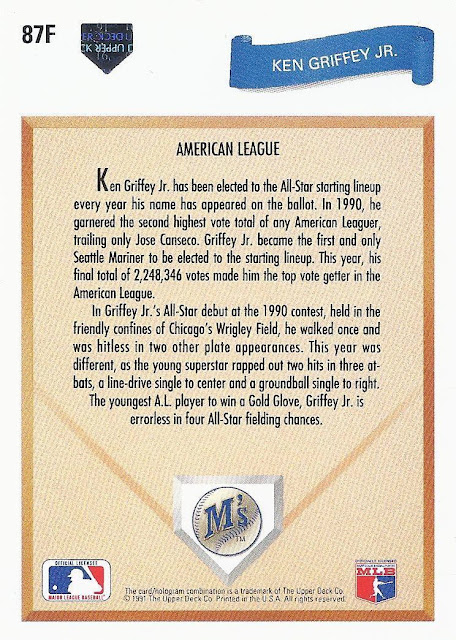 Is this a good Griffey card? Yes.

The set: I complain sometimes about small factory sets, usually accusing them of being pointless money-grabs by the manufacturer.  '91 Upper Deck Final Edition is the exception.  This set is positively loaded with great cards including a stack of excellent rookie cards as well as some great All-Star cards.  Oh, and two Griffeys, but who's counting? (me, I am)

I'm lucky enough to have won two of these sets on the last day of my high school baseball card collector's club's existence.  One was sealed and the other was not.  The sealed one remains so to this day: 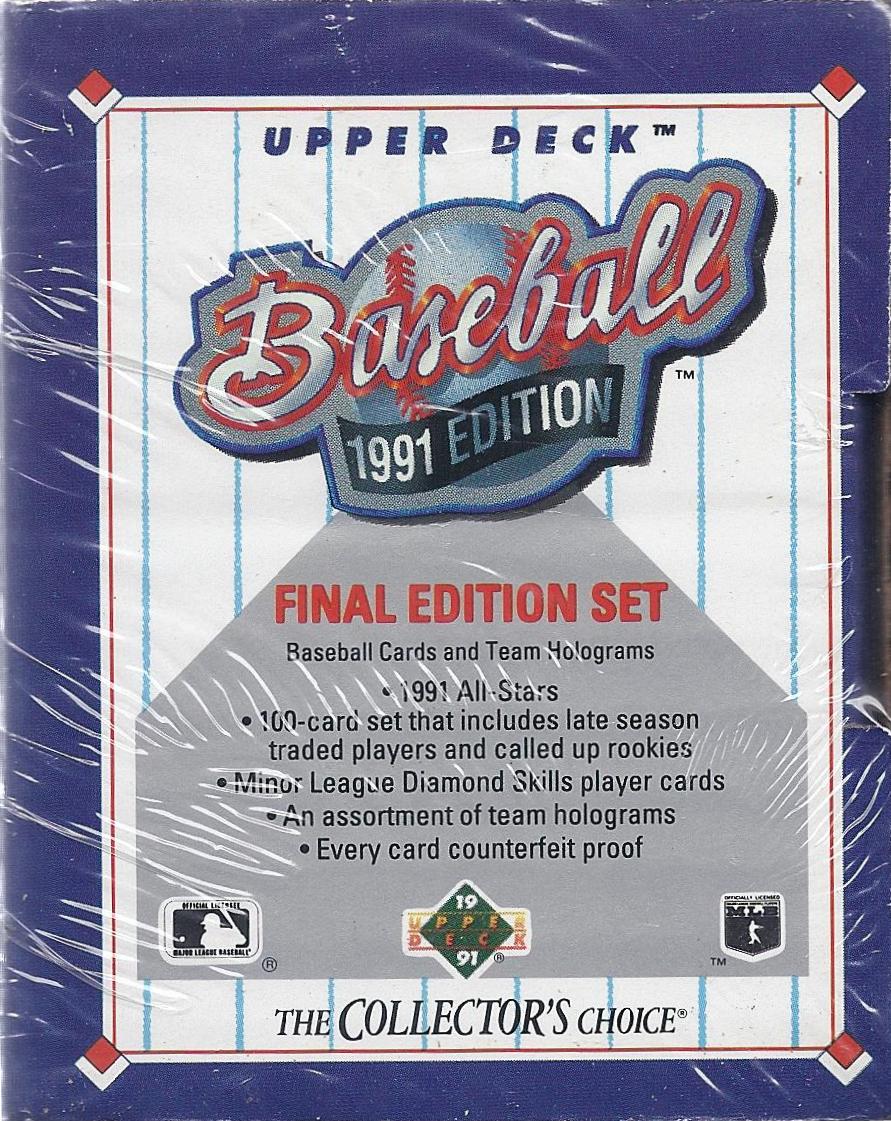 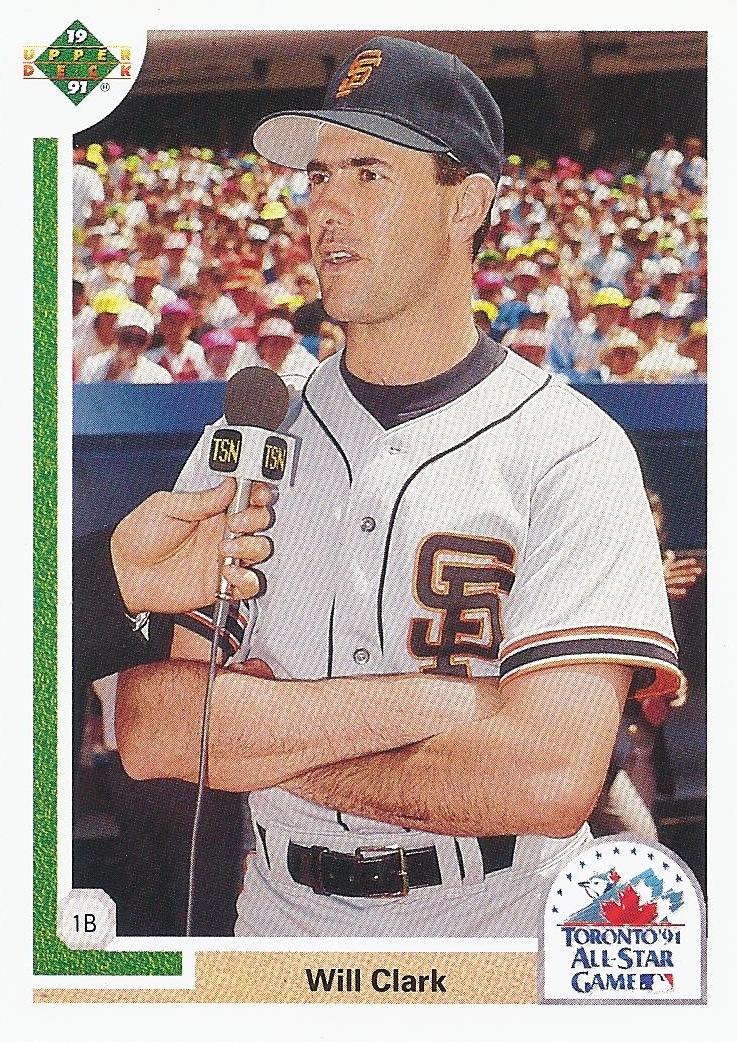 And how about that Will Clark All-Star card showing him being interviewed at the big game in Toronto?  Another awesome card.

Let's take a close look at that Griffey:

OK, so we're at the All-Star Game.  This is obviously an exposition/batting practice thing.  Griffey is showing off his naturally perfect, freak-of-nature Griffey swing, as he should be.  Looks like the Upper Deck photographer got primo access, being officially-licensed back then.

There are a couple of people, a lady in a khaki skirt on the left and a man in a light blue polo on the right, standing in the background with their backs to the camera and their feet spread a little too far apart to appear comfortable.  These are probably native Toronto residents who volunteered for this event to keep a perimeter around the talent so they can have an effective practice.  There are a couple of guys, probably with special passes, who appear to have broken that perimeter and are standing all up in Griffey's net business, wondering how such a swing could exist in creation.  There's also another player in this picture standing in front of the girl volunteer.  Is that a Padres uniform?  Does anyone recognize that guy?

Sorry to dwell on this, but there's so much going on in this picture, and I'm an inquisitive fellow who enjoys the process of deduction.  Any suggestions as to who all these folks are in the comments below would be helpful.

Overall I love this card because it feels very real - my only complaint is a sentence on the back that reads "The youngest A.L. player to win a Gold Glove, Griffey Jr. is errorless in four All-Star fielding chances."  I get that they're trying to tie his Gold Glove to the All-Star Game, but this is a fluff sentence.  If you can't go 4-for-4 on catches in the outfield, you probably shouldn't play outfield let alone play in the All-Star Game at all.  It might as well have stated "A state of Washington Driver's License recipient, Griffey Jr. is 2-for-2 in successfully driving a car to the stadium for an All-Star Game."  Maybe I'm being overly-critical, but that was the closest thing to a flaw I could find in this whole set. 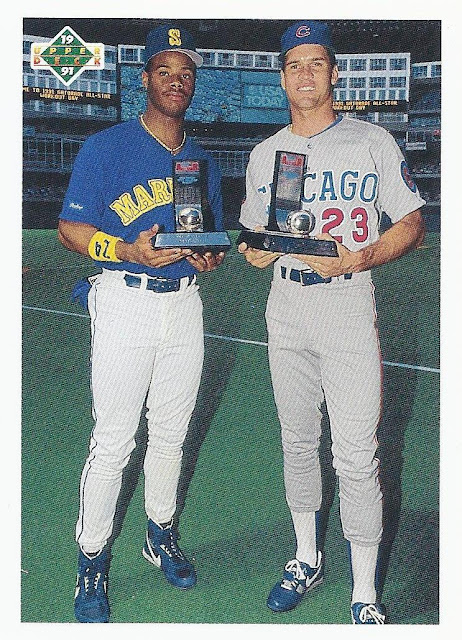 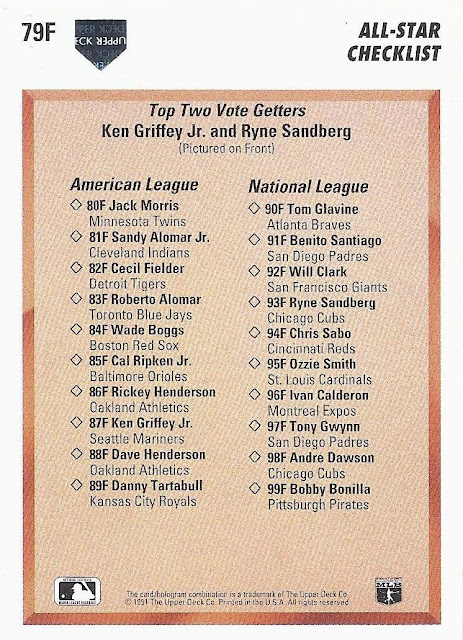 Another excellent card.  No frills, just a tiny logo and a big ol' picture of Junior and the great Ryne Sandberg holding their All-Star MVP trophies.  These are two of my favorites of all time, so it's remarkable to see them on a card together.
I've seen these going on eBay for pretty cheap, so it's definitely worth picking up.  You should also go see the new Star Trek movie - that is unrelated but equally true.
Posted by The Junior Junkie at 6:34 PM