﻿ [I opted for French in high school and college, so forgive me if my Spanish is a little off.  Or a lot off.]

In my collection: 1 regular

Is this a good Griffey card? Yes.  I mean, he's chunkin' the deuce, bro!  Mess with that, please.  I dare you.  Plus it's fun to see what certain baseball terms are in Spanish.

The set: This 100-card set was created by Donruss/Playoff as the first entirely spanish-language set (unlike Pacific which had both English and Spanish).  Each box came with a poster also entirely in Spanish.  Sadly it was both the first and last year the set was made.

I suspect that Donruss, having just recently returned to baseball after declaring bankruptcy three years before, was trying to find a niche with this set.  Nobody except maybe Pacific was going after the Spanish-speaking baseball collector, and Pacific wasn't making baseball cards anymore at this point.  I can't say this was a bad strategy.  Then again, perhaps the fate of Pacific was a sign of things to come.

I'm willing to admit that Griffey could be celebrating the fact that they have two outs on the opposing team, but I prefer to think that this is shot of Griffey chunkin' the ol' deuce.  Griffey is super cool and up on current urban trends.  Peace in, playa.

They did add a shadow behind Griffey even though he is in front of a far-away backdrop.  It looks kind of ridiculous, and for some reason the effect makes me feel claustrophobic.

The design itself isn't bad.  It includes the diagonal effect found in the 2001 flagship set and a banner similar to that used in the 2002 flagship set.  Both of these elements are repeated on the back of the card.  As a whole its not bad, but also nothing to write home about.

The best part of this set is piecing together what all the words mean.  I really like the J after his name - it stands for Jardinero which must mean outfielder.  Apparently his lanza is izquierdo, which I think is saying that he throws left-handed.  This card is an interesting read all over the place.

One issue: the picture is the same as that found in the 2002 Donruss Elite base card: 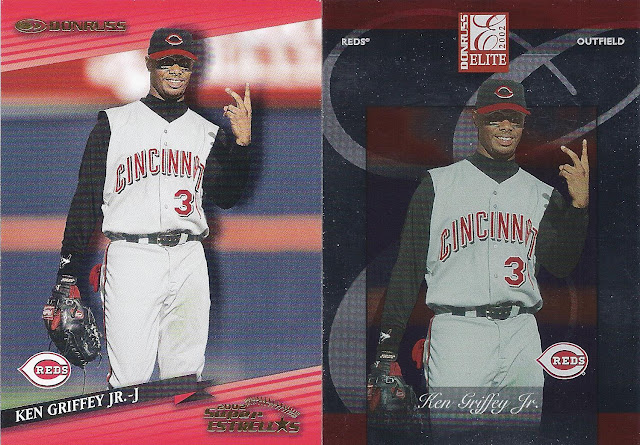 Pretty lazy, but appropriate when considering the excellent deuceage being thrown.  The card backs look nothing alike: 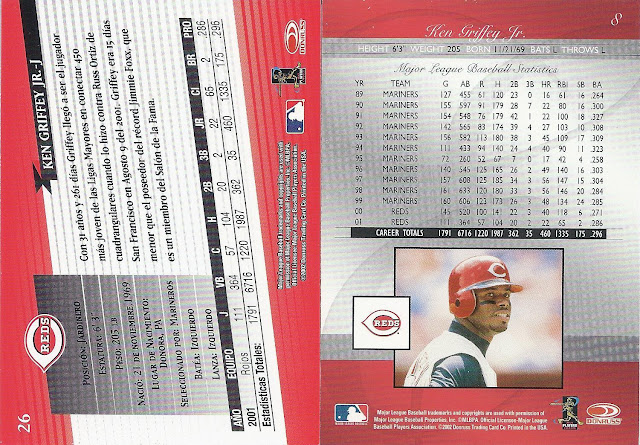 A Pack to Be Named Later published this post a few years back wherein you get to see this very Griffey just pulled from a pack.  Very exciting - to me, anyway.

The only thing I'm missing from 2002 Donruss Super Estrellas is the poster:

Besides that, the base card about does it.

Right now I'm going to try to decipher the blurb on the back using only my powers of context, my knowledge of the Romance languages, and what I know of Mr. Griffey's career.  Here goes:

"At 31 years and 261 days old became the youngest player in the major leagues to hit 450 homeruns  against San Francisco's Russ Ortiz on August 9th, 2001.  Griffey was 15 days younger than previous record-holder Jimmie Foxx who is in the Hall of Fame."

How'd I do, Spanish-speakers?  I think I'm pretty darn close.