A Veritable Clusterbonk of Trade Fodder

I recently received trade packages from Marcus of All the Way to the Backstop, Matt of Red Cardboard, Zenus of The Prowling Cat, and Josh of Royals and Randoms.  Wanna see?

First up, Marcus from All the Way to the Backstop sent me a healthy Griffey stack, but who really came here to see Griffeys?  Probly nobody.  That's why we're gonna start things off with this.....thing:

﻿
﻿
It's the eyebrow curl and the off-putting smirk.  Was he going for sexy?  Did Austin Powers direct this photo shoot?  I love Jeff Bagwell and passively collect his cards, but dude.  This card is just.....dude.....

The addition of that Bagwell to the trade stack was both hilarious and topical.  Studio '13 is rebooting this very design - let's hope the same silliness ensues (come on, big white parrots!).

OK, enough fun.  Let's get down to Griffness:

Matt from Red Cardboard also sent me some excellent examples of Griffeytude.  This mention is coming super late as I had lost the scan I made of Matt's trade cards and had to e-mail him to get a reminder of what he sent me:

﻿
﻿
Matt's a huge Reds fan and a swell fellow.  He informed me also that he has a much more substantial stack en route, so I'm preparing myself emotionally for that.  Go peep his blog!  It's fun and a little snarky, just how I like 'em.


Zenus, purveyor of The Prowling Cat, sent me a box containing some very unique Griffey items:

﻿
Zenus wants your pocket schedules!  You never know what you're going to see on his blog - he collect lots of different things: Nascar, Team business cards, Justin Smoak.  The guy is all over the place!

I'll be sending him a stack of New Orleans Zephyrs pocket schedules I got from the dry cleaners near my house as well as whatever cards of players he collects I may have and pretty much anything Nascar-related I can find.  Thanks, Z!

Josh from Royals and Randoms posted recently about an amazing Craigslist find: uncut sheets of Mother's Cookies cards.  I saw them and immediately posted how much I wanted to own them, then proceeded to forget I did that.  Josh went out of his way to contact me and get my address to send me this amazing sheet: 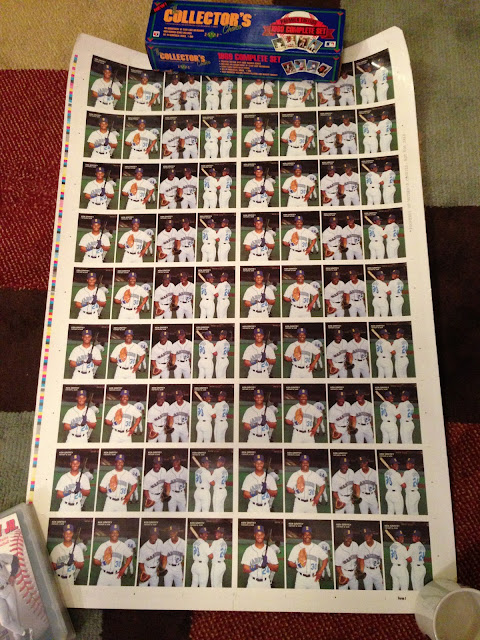 What an amazing collector's item - and one that is not cheap to ship.  It measures a little bigger than 24x36, so I'll be getting a 27x40 movie poster frame and a nice mat for it sometime soon.  Pics to follow....

I'll be sending Josh a hairy man-stack of Royals and whatever else I can find that he collects.  Go check out Josh's blog, too.  It's where I learned that Juan Gonzalez played for the Royals at one point (still not buying it.....).  His blog is also a little snarky at times.  Thanks a ton, Josh!

It's been an crazy couple of weeks for trades over at the Junior Junkie.  Just when I get back to square with all you fellow bloggers, you surprise me with more great stuff.  I'll be assembling packages and shipping them out this Saturday so we can all continue to be friends.
Posted by The Junior Junkie at 12:15 PM

Email ThisBlogThis!Share to TwitterShare to FacebookShare to Pinterest
Labels: All the Way to the Backstop, Red Cardboard, Royals and Randoms, The Prowling Cat, Trades, Uncollectables