Why I'm Quitting Packs: Spoils from eBay and the Card Show

Let's face it: I'm addicted to opening packs.  I love it - it gets me some great trade fodder as well as great cards I didn't know I wanted.  It keeps me up-to-date on the sport and the state of the hobby in general.  Plus it gives me something to gripe about which is an essential part of blogging.

One of my collecting goals of late has been a shift in focus from current packs and repack boxes to more specialized, discerning purchases that will yield more Griffeys.

And the result has been a rousing success.

I've been spending my cash on specific cards (COMC, for example) and auction lots as opposed to busting packs.  Hence, the last few days have seen a huge influx of fresh Griffeys from multiple sources that included trades, a bit of eBay sniping, and a visit to the monthly local card show.

Trades get their own post, but here are the card show and eBay spoils.


I skipped it last month in favor of a few big COMC purchases, but this past Saturday between shipping trade packages at the post office and my buddy's bachelor party on Bourbon St., I was able to squeeze in a few hours of card show.

It's not what you think - this is an advertisement card printed to look like the real deal.  The back includes a price list of different baseball card sets from the 70's and 80's.  It looks even less authentic in person, plus it is less sturdy than a real '89 UD card.  I'll cover this more when it makes its way into an oddball card post.

I already own one of these that someone once sold for 60 cents.  I know this because they stuck a price sticker right on the card front.  Sadists..... 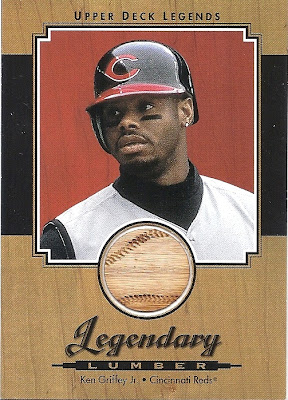 This is my big trophy from the show.  I'd seen it at the same show two months prior but didn't have enough cash to land it.  This time I was ready.  The dealer was shocked I remembered the card two months later.

It wasn't just Griffeys, though.  Here's everything else I found to spend money on:

That was not the only vintage I picked up, but everything else is slated for specific bloggers, so you'll just have to wait for them to post about it (and me to ship it which will probably take far longer).


﻿ ﻿ ﻿
Moving on, I've also been participating in the occassional eBay auction.  In the past week I've landed 5 smaller auctions and one kinda big one.   Without giving too much away (all of these will eventually be covered in the blog), here are a few highlights from those auction wins:

﻿
Everything else listed here is from the big win which was over 250 cards.  Take a look:

﻿
﻿
On all six eBay auctions I averaged 25.5 cents per Griffey and ended up with just under 500 Griffeys total.  About 40% were new to me which is a pretty amazing ratio considering how many I have.

Busting packs is fun and exciting; but it doesn't touch eBay, COMC, my LCS, and card shows when it comes to value and average price per card.  I will admit here that I picked up a bunch of packs of '91 Studio and '94 Stadium Club for 25 cents each.  For a quarter I don't even count it as pack busting.
Posted by The Junior Junkie at 2:25 PM