2002 Donruss Fan Club and Best of Fan Club: a Celebration of Mediocrity

﻿[Note: Over the next few posts we're going to spend some time with the Donruss sets of 2002.  I thought there would be only four or five, but no - I keep uncovering all these oddball sets they released that year.  So rather than mete them out one at a time over many months, we're just going to throw them all at the wall at once and see if they stick, exactly like Donruss did.  I've always been one to stick up for Donruss.  Sadly, now I'm starting to understand why they went out of business.....again.]

Is this a good Griffey card? Yes.  In the interest of collecting all the Griffey cards there are to be had, this is certainly one, er, two of them.  Ahem.

The set(s): We're doing a two-fer here as like Topps and Topps Chrome, there is essentially no difference between Fan Club and Best of Fan Club apart from the finish of the card and the words "Best of."  Even the backs are identical.  Yet somehow they are two different sets.

It seems Donruss took what should have been a subset of the flagship base and its parallel and made each into its own set solely for the purpose of shoving more cards into packs.

At least Topps Chrome is a cool finish and based on something pre-established, namely the Topps flagship base set.  Fan Club is a mediocre subset at best.  It's should never have gotten its own set.  Ever.  Yet it somehow got two.  These cards really, really never should have been made.

Let's take a closer look at the Griffeys....I guess: 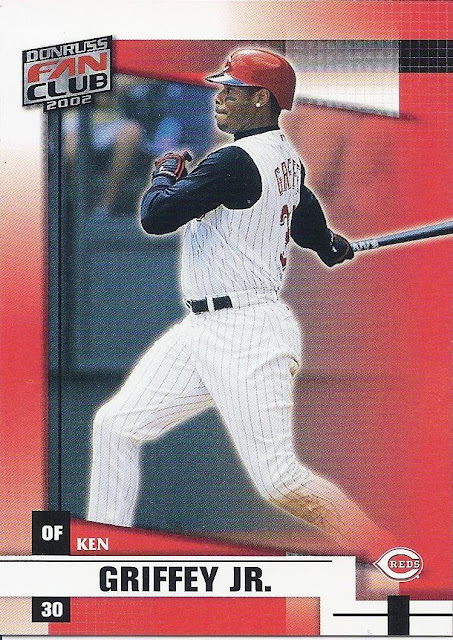 Like Donruss in 2002, it appears that Griffey just pulled one foul.  But I happen to know that Griffey is awesome at baseball, and he actually just knocked a hit into right-center.  Now he's poised to run as he watches it drop between the fielders. 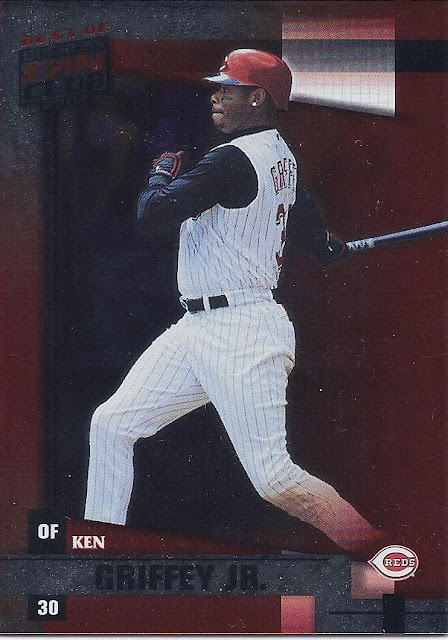 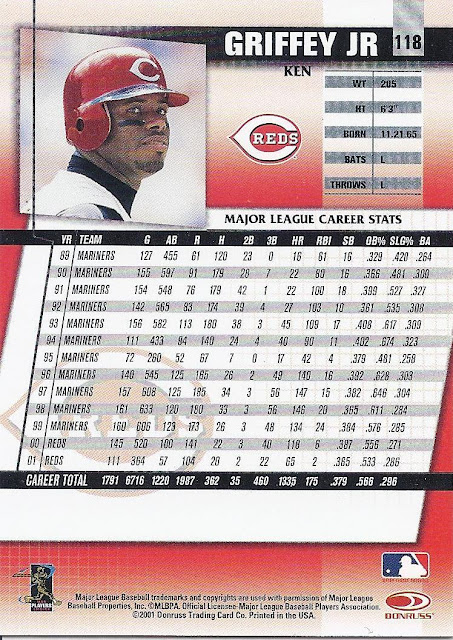 This is the back of both cards - there is no difference between them.  The design here is actually pretty good.  Complete stats and a decent layout.  I would prefer to have seen some blurb in the negative space at the bottom of the stat box; but overall no complaints, I guess.

I am glad that Donruss wasn't putting Griffey into many inserts at this time.  For that reason I am only missing parallels from these two sets, and I have no real interest other than that of a completionist in obtaining them.  Still, here they are (and big up to millercards.net who had complete checklists for this weirdo set):

It's true that Donruss is not the only company to turn a subset into a set and a parallel into a whole other set; they are, however, a company that already failed once.  You would think their "come to Jesus" moment would have been declaring bankruptcy only three years prior.

Still, in the words of one of my favorite podcasts: How did this get made?  Perhaps Donruss still had something to learn about dumping set after set on an already supersaturated market.  Perhaps the previously football-exclusive Playoff brand was releasing sets the way they had always done believing baseball collectors were always up to embracing the new, shoddy as it may have been.

Regardless of how these two sets came to be, I have to wonder if they made money.  I would love to see some sales figures.  Or would I?

Happy hump day, baseball card people!
Posted by The Junior Junkie at 11:41 AM