This is my entry for Round 4 of the Nachos Grande Blogger Bracket Challenge.  Feel free to go there and vote for your favorite post if you're so inclined.  I'm up against Comatoad of the great blog Bleedin' Brown and Gold who made a really cool video for the last round.  He's got mad skills...

Also, while this post does get a little blue, I respect all these guys and wish them well.  Enjoy! 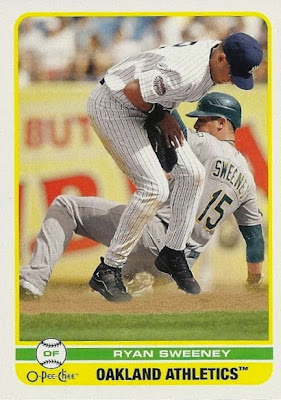 This card kind of stumped me.  It's pretty funny on its own, but I had no idea where to take it.

First I tried to write a story.  It was about Ryan Sweeney accidentally running over Bud Selig’s dog and Selig conspiring with the card companies to give Sweeney only terrible cards.  I even went so far as to make a few in MS Paint which I am including here because I’d hate to see them go to waste. 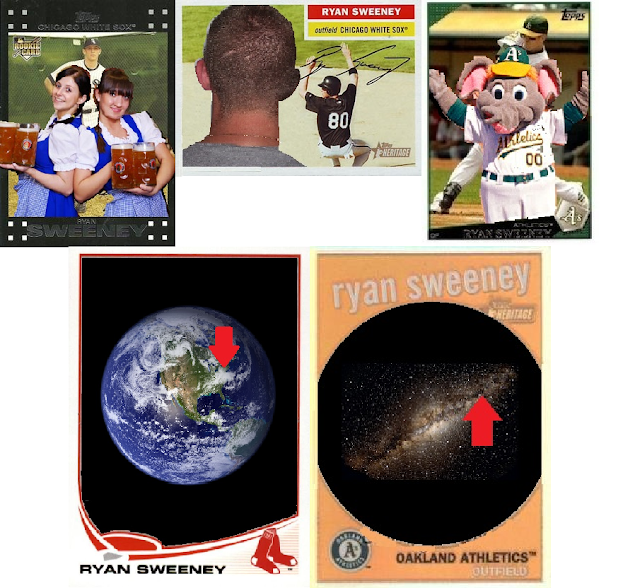 I named Selig’s dog Mister Foofkins, and the dialogue in the post included the line, “Ready the pod!” which I absolutely loved.

The problem with that is I was bored to tears.  So instead I decided to write what I know, and I know low-brow card humor.

Let’s face it, some cards are funny.  They weren’t trying to be, but as you flip through a stack of cardboard, they make you chuckle.  I love those cards, and I collect them with almost as much passion as I do Griffeys.

You’ve got the guys with huge 80’s glasses: 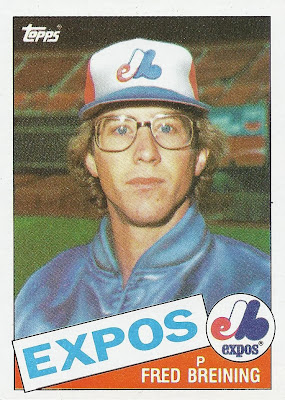 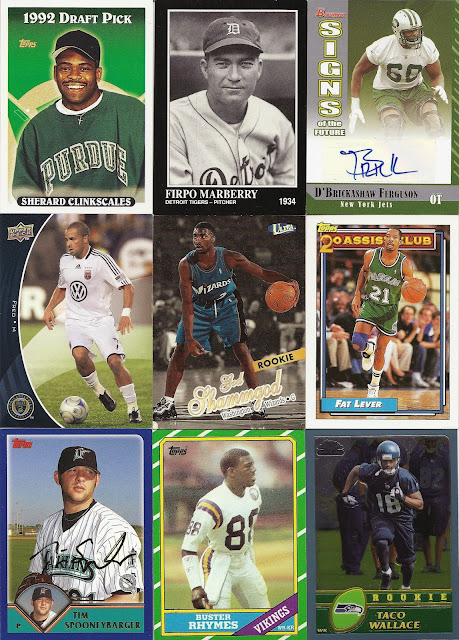 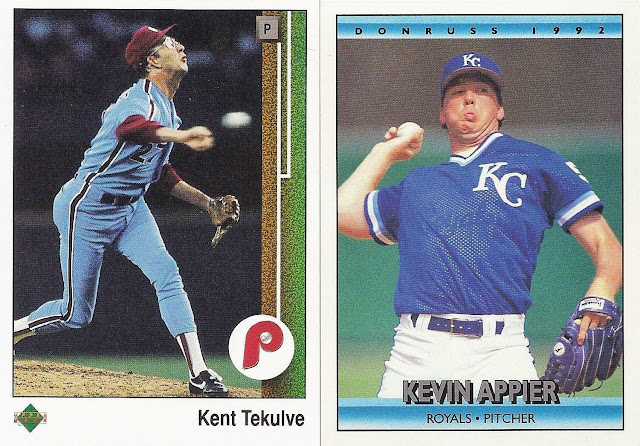 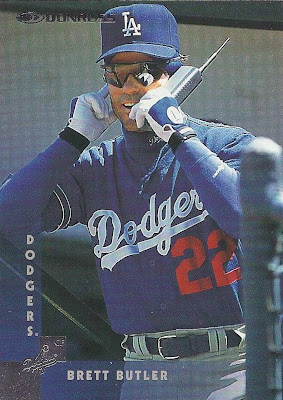 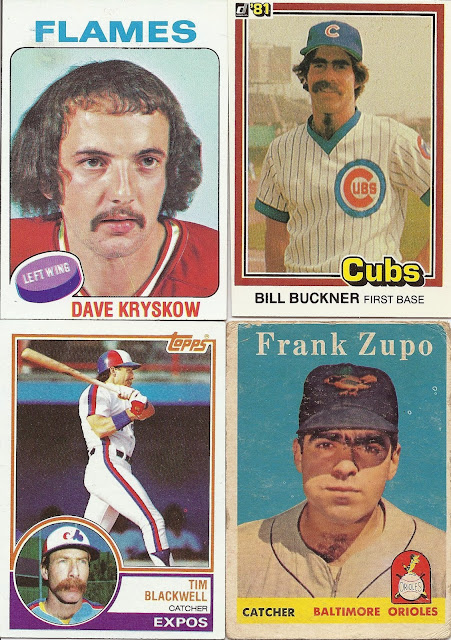 And those cards that possess a certain hilarious je ne sais quoi: 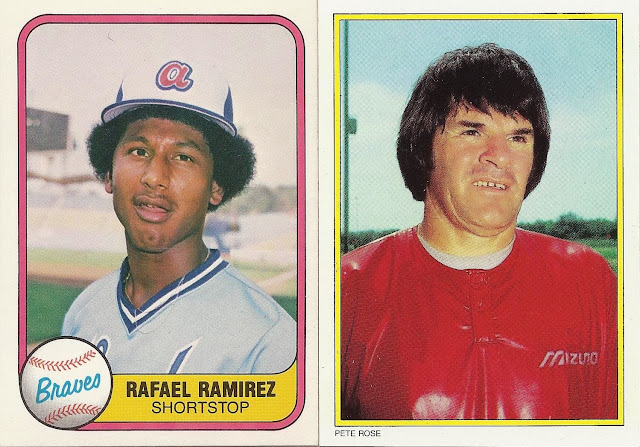 Then there are the misfits - the innuendos, the photography mistakes, oversights, and sometimes completely out-in-the-open sight gags.  The ones that make you question who thought this was okay for kids to see.  Those cards are the stuff of legend, and the topic of this very post.  It may get a little elementary-school in here for some, but such is the nature of low-brow cardboard humor.  Let us stand and laugh together. 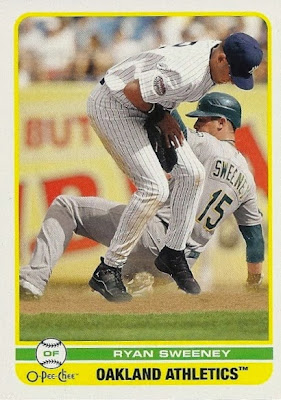 This is less a Ryan Sweeney card than it is a "We got a sweet shot of superstar Derek Jeter catching one in the marbles.  LOLZ.  Sorry, whoever that is in the background - you're getting the Jeter crotch photo...."

It’s reminiscent of this masterpiece: 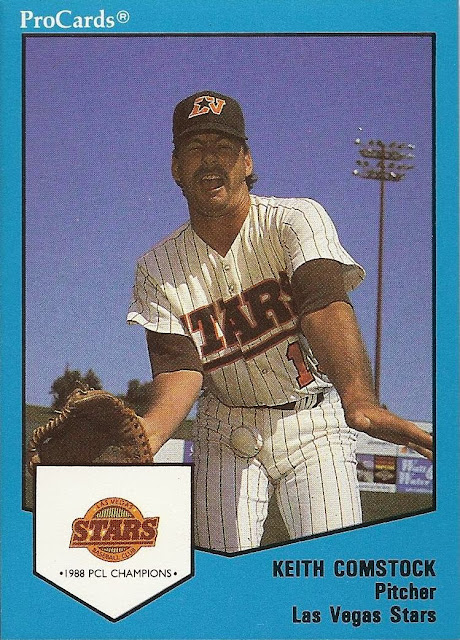 Oof - right in the gooch.  This photo was taken at the perfect moment, and Keith's expression here makes it one of my absolute favorites.


Sliding can often result in some awkward poses and body positions.  Here are a few examples: 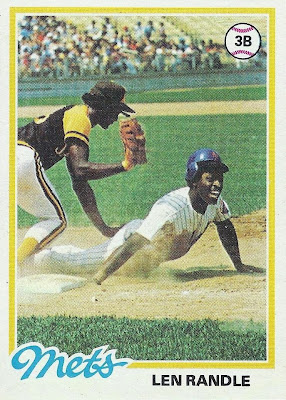 He's got to tag the guy - I get that - but why use the open, ungloved hand?  And what is with Len's expression?  No, no, none of this makes any sense at all.... 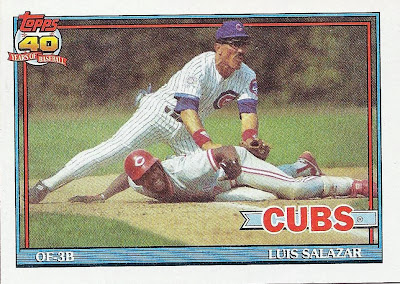 Luis decided to go with the two-handed butt-touch much to the apparent delight of the baserunner. 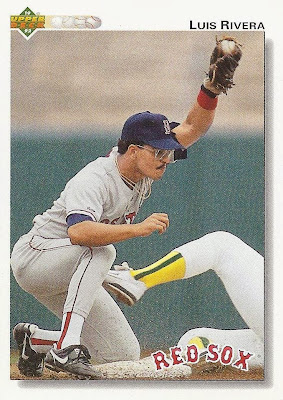 Positions like this are why I could never play second base.  That foot is awfully close to slamming home. 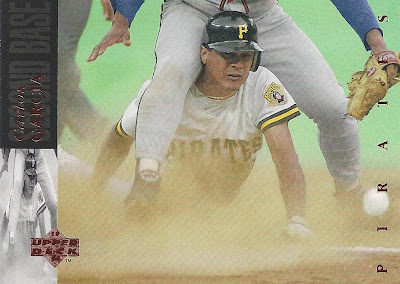 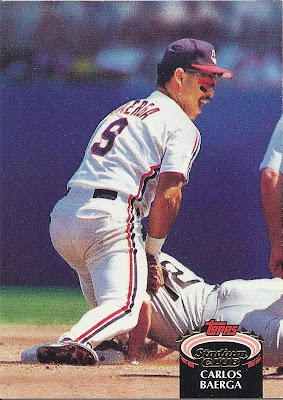 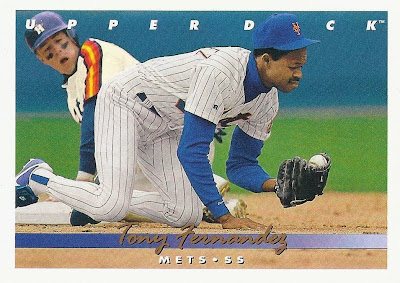 This one is all about Bagwell's expression.  His line of sight helps, too.

Some cards feature guys with hilarious names, and sometimes those names can get a little suggestive.  Here are a few of my favorites:

You may have heard the name John Thomas in a song from Monty Python's The Meaning of Life.  It may only be a British term, but that was enough to earn it a spot in this lineup.  My name is T.J., so the middle one made me chuckle.  Mr. Held should be self-explanatory.

Here are two Rusty's and a Shocker.  Mr. Kuntz (pronounced kyoontz) gets a lot of attention for his surname despite the fact that a lot of folks pronounce it incorrectly.  But who cares?  It's funny!

The card says "Pete," but I call him Peter.  And Kevin played for the Drillers which is just perfect. 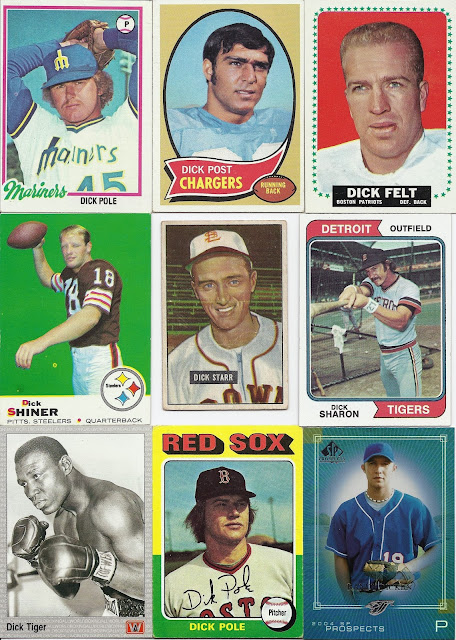 I know Dick Pole is in there twice, but come on.  Dick Pole!  The guy on the bottom right is Randy Dicken.  Ahem. 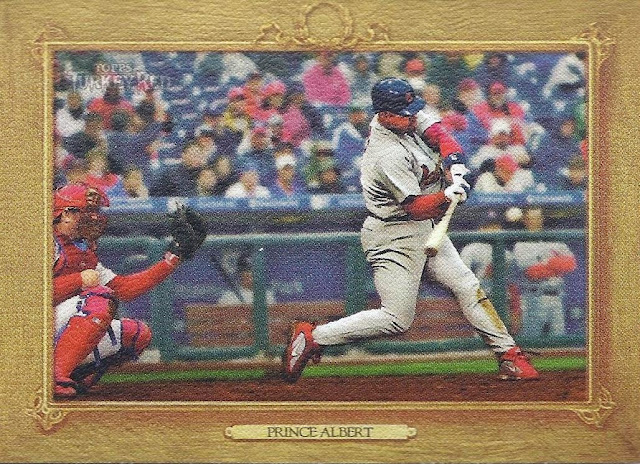 I started to include a link here to what a Prince Albert is, but it would be most decidedly out of the scope of the low-browiness this blog.  Somebody at Topps had a good laugh here. 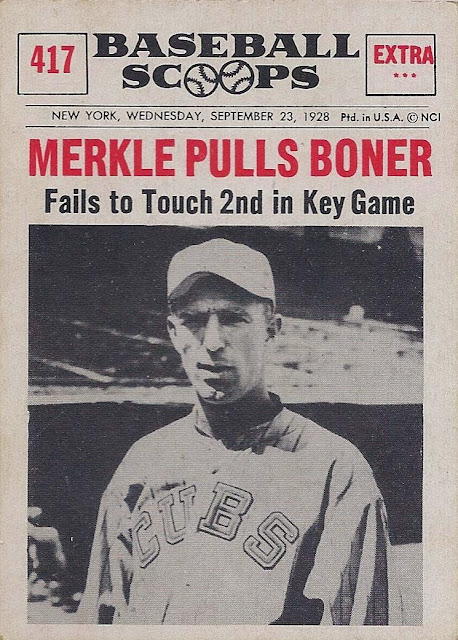 This very well may be the king of low-brow cards.  Of course language changes through the years, so this didn't have the meaning then that it does now. 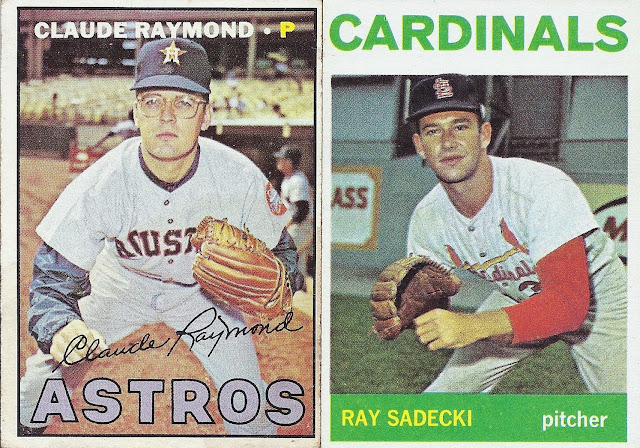 Here's a pair of sloppy photography mistakes.  Poor Claude actually has multiple XYZ cards.  This is the cheaper one.  The humor in Ray's card is also somewhat hidden, butt look hard enough and you'll find it in the end.

The proofreaders nowadays are a lot more selective, so such low-brow card humor is difficult to come across.  That Ryan Sweeney card is one of the few to come out of recent years.  I would like to see companies embrace the low-brow and release them as SP's or in a subset, so I've taken the liberty of redesigning the subject card myself.  Here it is, and if you ask me it's a heck of a lot more appropriate than the original: 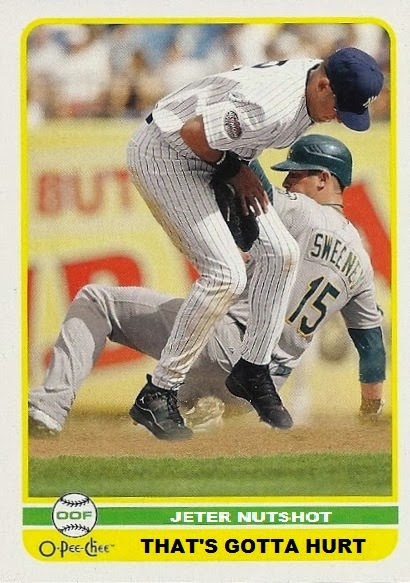 Posted by The Junior Junkie at 8:10 PM