Mechanics of the Sort: Griffeys

I spend a lot of time organizing cards, but none more meticulously nor with more enjoyment than new Griffeys.  They must be sorted by year and brand, evaluated, counted, and placed appropriately in the binders.  I finally have it down to a science; so in the interest of spreading best practices, here it is in all its anal-retentive glory: the Griffey Sorting Process.

All incoming Griffey cards go to a catch-all Griffey-only stack on my card shelf.  All Griffeys sent in trades and, when appropriate, those acquired from card shows, COMC, the LCS, and eBay are scanned for eventual blog posting before they reach the pile.

Step 1: When the Griffey stack gets too high, usually over 100 cards, it’s time to sort.  Giddiness ensues.

We start with a stack of raw cards that usually looks like this:

Any and all cases are removed except for penny sleeves which stay on until the last minute.

Out comes the sorting table.  I got this table for Christmas from my Aunt last year and you wouldn’t believe how much it comes in handy.  You may have seen it in previous posts - I do all my sorting here as it is the perfect size and height and also highly portable.  She got it at World Market if anyone else is interested. 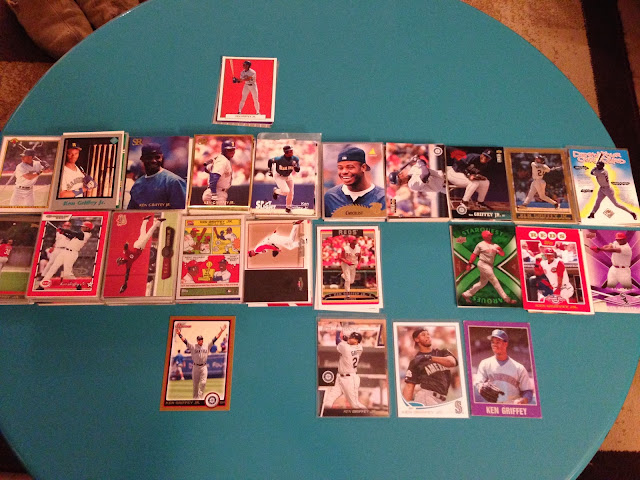 Step 2B: Once all the cards are in their proper piles, I research the unknowns and sort them accordingly.  The goal here is to eliminate the unknown pile completely, but in rare cases when the card year cannot be determined that card stays in the unknown pile.

Step 3A: This is where it starts to get technical.  First I draw a simple chart on paper for the count.  Before I begin it looks like this:
I grab the first stack, cards from 1989, count them up and mark their quantity on the top row of the chart.  Next I separate out those Griffeys I know for sure I already have,  checking them for differences such as errors, wrong backs, promos, hard-to-spot parallels, and other differences of that nature.  Then it’s a simple matter of sorting them into the binder.

To save binder space and pages, cards for which I already have a full page go into a separate stack.  These will eventually be sorted into the overstock box which looks like this:

[A note about the overstock box: It was getting silly flipping through page after page of the same card, and these Ultra Pro Platinum pages don’t grow on trees.  I mean how many 1990 Donruss Diamond Kings do you need to see to know I’m completely insane?]

Step 3B: While this part takes the most time, it is also the most fun.  I put the remaining cards from that year (the ones I wasn’t 100% positive I already had) into a vague brand order and start sorting them into the binders, vetting them as I go.  I group like cards together and find or make an appropriate space for cards that are entirely new.  This is how I am able to keep an accurate count of unique Griffeys which I tally up one-by-one in the bottom row of the chart.

I repeat this process for each year’s stack until they are all in a binder or in overstock.  I then add up all the counts for each row to get the overall total number of cards added as well as the total number of new cards.  I can then combine these figures with the standing count and calculate the new duplicate ratio. 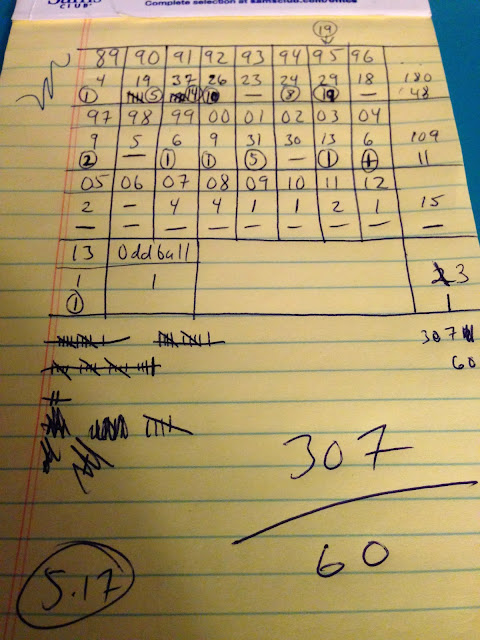 My goal is to have a shrinking duplicate ratio that slowly approaches one – this would signal efficient collecting practices on my part.  The final numbers put me at 307 cards added, 60 of which are new to the collection.  That's a duplicate ratio of 5.17, well above that of the collection which is 2.576.  This particular stack of Griffeys was less efficient than I hope, but I did get 60 new adds so no complaints.

Here are the counts before and after the new stack:

Step 4: Rebuild.  Once the overstock cards are sorted into the box, the binders are put away, and the counts are updated on the blog, the Griffey stack can begin anew.

There are usually a few weeks between Griffey sorts, depending on how active I was in collecting over that time.  FeeBay auctions are by far the quickest way to acquire, but it has lost its efficiency as my collection has grown.  I can no longer count on blind lots to increase my Griffey count and reduce my duplicate ratio.  My focus has switched to quality over quantity which means fewer Griffey sorts.  I have to savor them.  Perhaps that’s why I’ve turned it into a whole post.

In the mean time I mailed out everybody's picks from the Griffey Birthday Giveaway, so look out for those this week.

Happy Sorting!
Posted by The Junior Junkie at 1:31 AM