It's hard not to pull for the Saints down here in NOLA.  We have a tough road ahead what with the road games and going through Carolina and all that, but we are hopeful and loaded with talent.

Fuji from The Chronicles of Fuji and I have been swapping cardboard for a little while now.  I recently got a relic-laden trade envelope from him.  Here they are in order of Saintliness: 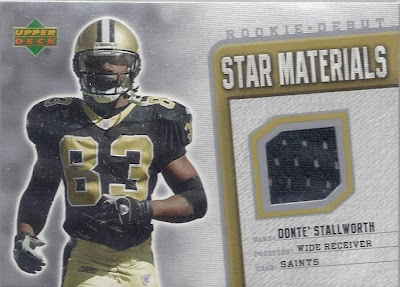 Donte moved on to several other teams after his stint with the 'aints.  The last thing I remember hearing about him is that he killed someone while drunk driving and more or less got away with it.  I hope that's not the case. 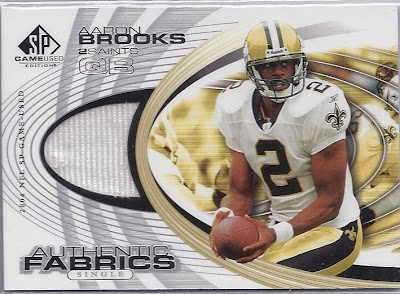 Aaron Brooks was our first somewhat legitimate quarterback, but everyone was going bananas about Ricky Williams and (sigh) Mike Ditka, so people forget that he held the record for most TD's by a Saints QB until Drew Brees came along. 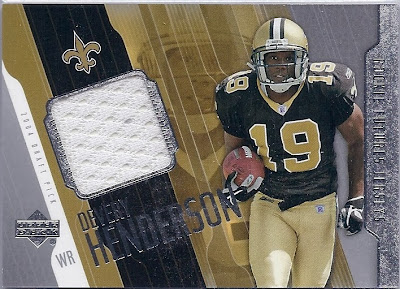 Devery was an LSU Tiger, and a good one.  He caught the "Bluegrass Miracle" pass that allowed LSU to edge out Kentucky.  Devery performed similar feats with the Saints - the guy had great hands.  I remain a big supporter of this guy. 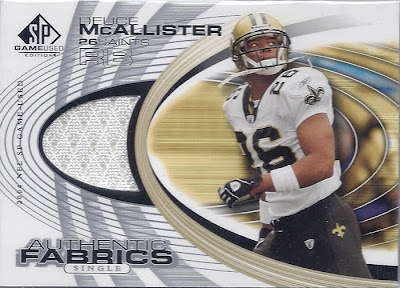 A fan favorite, Deuce was a fullback's fullback.  I've seen him push a ball or two (hee hee) through a wall of defenders on many occasions. There are still plenty of Deuce jerseys floating around the Dome on gameday despite his being plagued by injury in later years.

Thanks for all the amazing relics, Fuji!  I'll be showing these puppies off to my beer-swilling football friends.

One more thing: When I was a teenager, this guy tipped me a ten dollar bill.  Please enjoy my favorite version of this song:

Posted by The Junior Junkie at 1:30 AM