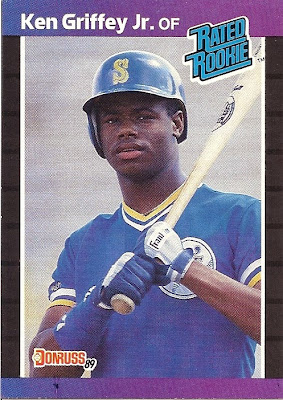 Today marks the 1-year anniversary of The Junior Junkie.  It all started with this post about the 1989 Donruss rookie card that was my original muse.  The blog has evolved quite a bit over the past year.  Here are a few things that have changed since that first post:

Philosophy: The original plan was to show one card per post, but it became apparent a few posts in that such a plan would take forever (at one post per day, it would take over 7 years).  Now I post by set.

Post titles: These started out as just the name of the set or specific cards the post was about.  It was boring.  It’s a lot more fun to think up a fun post title.

Accuracy: Sorting standards and disciplined organization have helped make me keep the Griffey collection up-to-date and on track.  I’m also getting better at organizing my non-Griffeys and trade fodder.  Still ironing things out, but on the right track.

The Griffey collection began with two binders.  A few months into blogging I decided to upgrade to this: 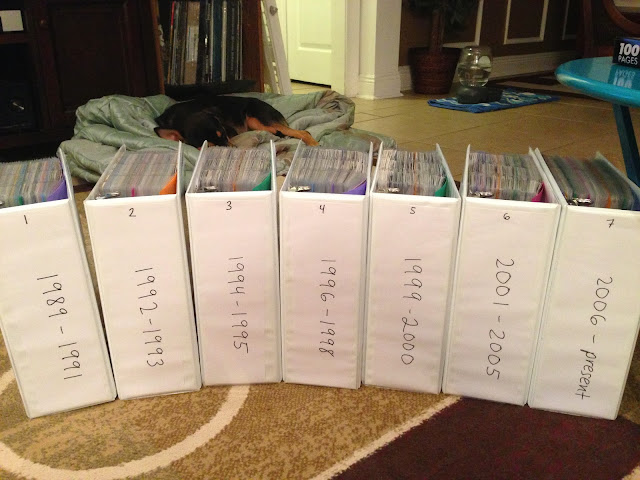 I've since had to add two more binders while also removing many pages of dupes.  I also went all artsy-craftsy with the labels.  Here's what the collection looks like now: 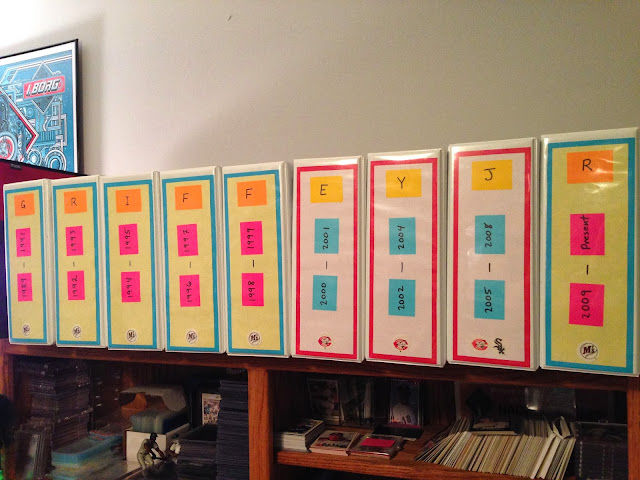 COMC: Now I have an easy way to convert my non-Griffeys of consequence into new Griffeys of my own choosing for next to nothing.  Every penny I make off my submitted cards goes towards expanding the Griffey collection.  Very excited about the prospects here.

Features: I started a few features, the most popular being Design Timelines: the Griffey Base Card Project.  I’m just one card away (2001 Finest #90) from the complete Topps Finest Timeline.  I’ve also just scratched the surface on the new A Junior for All Seasons feature which shows Griffey on vintage Topps designs by decade.  These are a blast to put together.

Set Building: I never thought I would be this kind of collector as it takes a lot of time, space, and patience; but I’ve now completed 2013 Topps Series 1 and 2, and I’m only a few cards short of knocking out Update.  These are the first sets I’ve even considered completing since ’89 Donruss when I was a kid searching for old #33.  I’ve even moved on to ’95 Leaf and several years of Donruss puzzles.  I now have over a dozen completed large-scale sets with several more close to being finished.

Blogger Pals: I've had a lot of fun trading and communicating with many of you via e-mail and blog posts and comments and such.  Maybe one day we can have a card blogger convention and talk about cardboard over drinks.  I officially volunteer my house for this.

I hope you've enjoyed reading TJJ nearly as much as I've enjoyed writing it.  Thanks to everyone who has supported this thing, and here's to another year of using my passion for Griffeys as an excuse for a creative outlet.

To celebrate reaching the one-year mark I've made a major acquisition: a single card that is to be the crown jewel of my collection.  A Holy Grail of sorts among Griffey collectors.  I've already said too much, but when it arrives it'll get its own post.  Be ready...
Posted by The Junior Junkie at 9:20 PM