Conlonoscopy 2: the Gloves Come Off


In my original Conlon Collection post I only had two of the regular cards and the two promo cards.  I’m proud to report that after a lot of digging and uncomfortable prodding in the depths of the Internet, I’ve finally hit pay dirt: all ten Conlon Griffey cards. 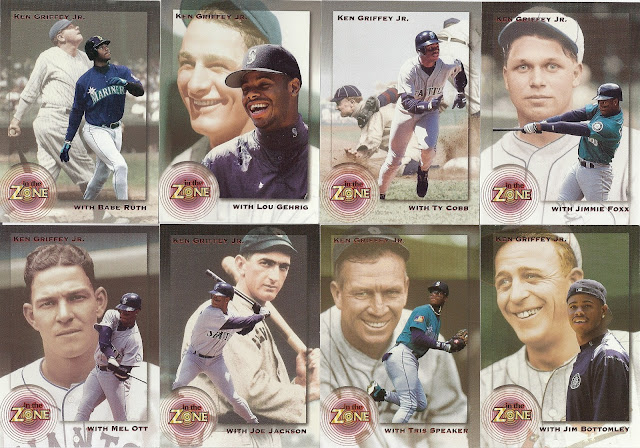 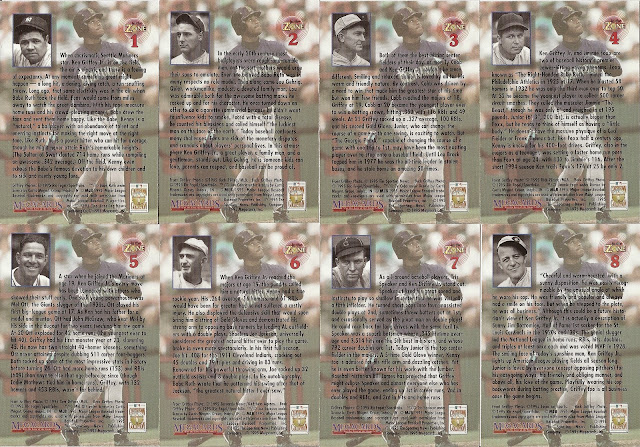 These eight regular cards make up the entirety of the 1995 Megacards The Sporting News Conlon Collection Ken Griffey, Jr. In the Zone Insert set.

I sort of lucked out in acquiring them, too.  I spotted one of the cards mixed in with a bunch of other Griffeys in the top photo of an eBay auction lot.  I then moused over the picture for a closer look and saw another, then another, and eventually I realized, “Holy cow, it’s the entire set.”  The lot also included an ’89 Upper Deck rookie (which always adds 20 bucks to the final price) and about 30 other cards, so it wasn’t particularly cheap.

The seller probably would have done better selling this set in its own auction.  I don’t feel guilty, though, as the guy ended up being a real buttnut in the end. 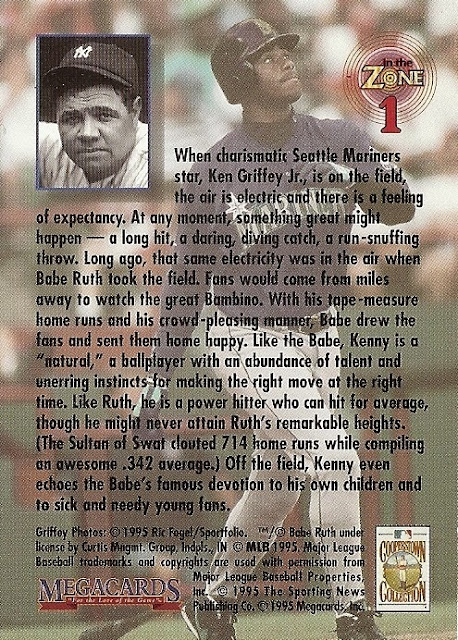 This card calls Junior “Kenny” and remarks on how both the Babe and the Kid are natural players who can hit for both power and average and also care for their kids and the needy.  It mentions that Kenny “might never attain Ruth’s remarkable heights,” those being his .342 lifetime average and 714 dingers.

That’s a steep lifetime average, but I do believe that were it not for his injuries Griffey would certainly have surpassed the 714 mark (he was only 84 short when he retired).  I would love to have seen this smug little card get proven wrong.  Oh, well.  We’re none of us perfect. 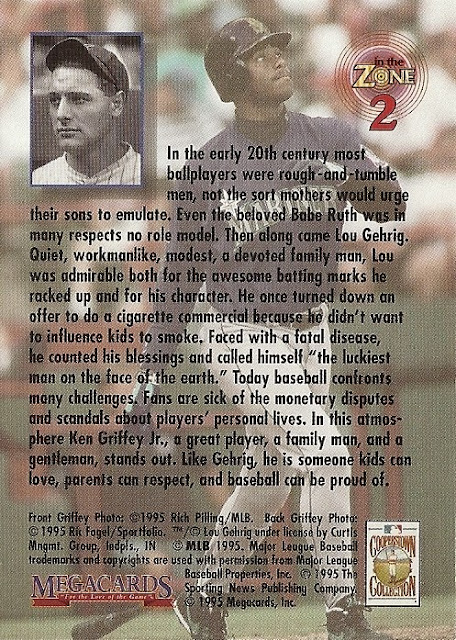 Probably my favorite blurb from this set, this card touts Gehrig and Griffeys mutual respectability both as players and as men. 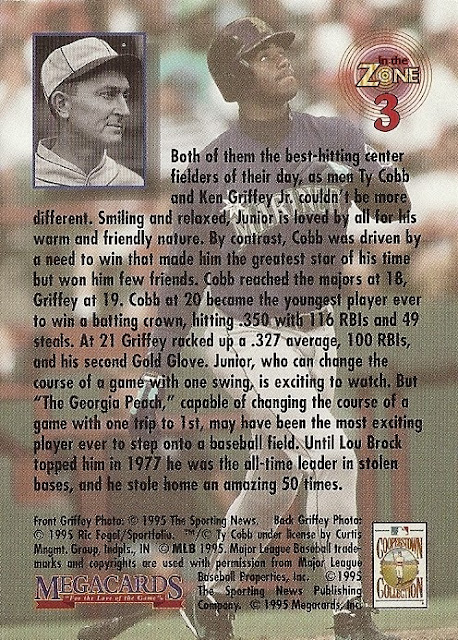 This card highlights how both Griffey and Cobb were center fielders, and that’s it.  Whoa, freaky…. 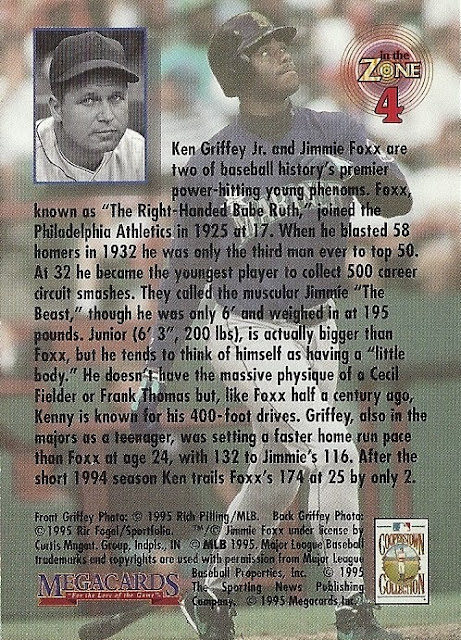 Again, the “Kennys” abound.  This card predicted that Griffey may have matched Foxx’s homerun pace, but he ended up a couple seasons short of Foxx’s mark of 500 HRs by age 32.  It also mentions that Jimmie was super-ripped while Junior is relatively un-ripped for a power hitter. 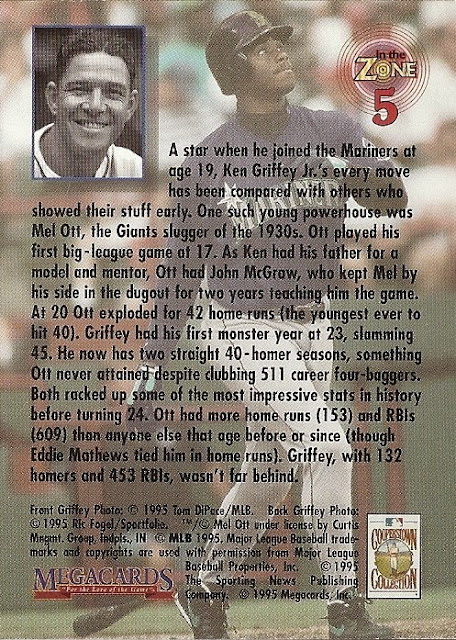 Both Junior and Mel started young, racked up respectable lifetime numbers early in their careers, and both had father figures to emulate. This card talks about how similar the first seasons of Ken and Joe were (they were not - Joe had a much better rookie season) and compares both players’ strong ability in the outfield (this part is valid). 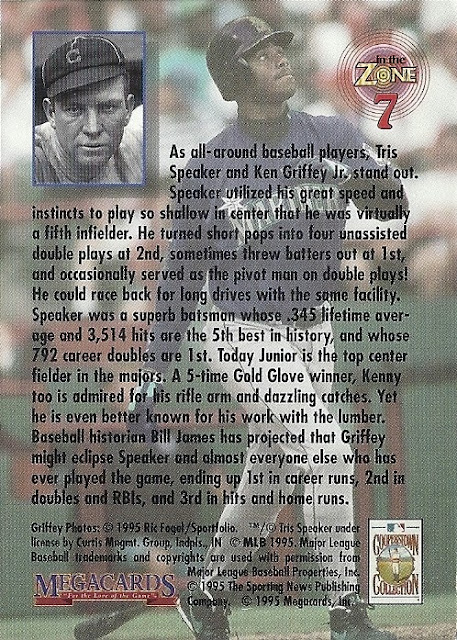 Griffey and Speaker are similar in that they are both excellent outfielders with more-than-solid offensive numbers.  Despite Bill James' lofty predictions Griffey is currently ranked 33rd in career runs, T-40 in doubles, 15th in RBI, 49th in hits, and 6th in home runs.  Those were pretty optimistic numbers there, Bill.  I like you. 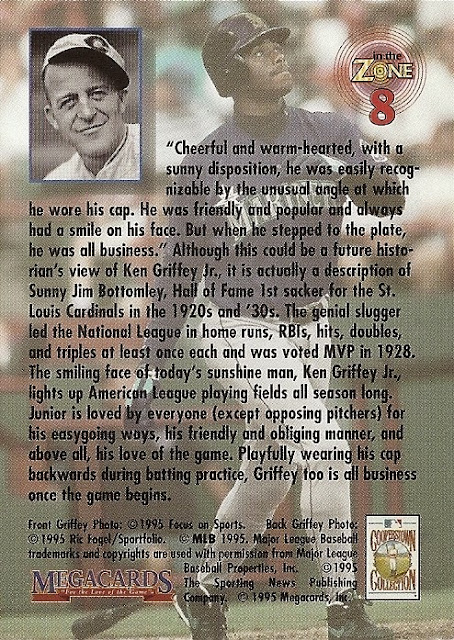 Actually this may be my favorite, describing the similarities between Sunny Jim's and Junior's genial characters.  The other players in this set have some impressive names and stats, but I think this one nails it.

And the train keeps a-rollin’ with the two Promo cards which bring the completed set to ten cards.  These are identical to the regular cards apart from a big “Promotional” stamp on the back.  They were made only for card #’s 1 and 3.  You can view them here.

I cannot end this post without mentioning the only card that could be argued as missing from a Griffey collection, and that is the redemption card for #’s 7 & 8.  I have no idea what it looks like, and I assume it’s nothing fancy.  Like the old Stadium Club Membership Form cards of the mid-90’s, there were probably thousands of them that got thrown away.  It will likely be easier to find unopened packs of ’95 Conlon.  It’s on my radar.

Overall I've come to really love this set.  The printing is solid with lots of warmth and color, and the blurbs are fun to read regardless of my poking fun.  Nice work, Conlon.  Or Megacards.  Or The Sporting News. Or all of you.  Who knows?
Posted by The Junior Junkie at 10:21 PM