This Post is Part of an Ongoing Feature The Great Griffey Base Card Project.

When you think of Leaf Limited, what comes to mind? For me it’s foil. Shiny, unscannable, easily-damaged foil. The base cards of Leaf Limited, while beautiful, share a quality with sets like ’71 Topps in that it’s tough to find a mint specimen undinged by life as a cardboard rectangle. They’re just fragile.

You may or may not also think of lines which seem to be a major element in every one of their designs. That may sound a little vague since everything is made of lines, but Leaf Limited designs tend to gravitate towards clusters of horizontal lines that move together. The layouts were also very symmetrical in the first part of the timeline.

The last thing you may think of is an aesthetic that, while modern and sharp, still exudes beauty like a flat little four-cornered Faberge egg. The designs tend to be a little more forward-thinking than other brands that focus on a classic look for their high-end offerings, but Leaf Limited stays pretty.  That's not easy.

Lots of precedents are being set this year, some of which stuck around towards the end of the timeline. One of my favorite things about Leaf Limited is that great cursive “L” in the logo which appeared in either metallic foil or holofoil on the first few sets. If you ask me, it never looked better than in these first three designs.

Another feature more striking in the beginning of the timeline is the prominently-featured parallel lines used to create a symmetrical focal point on the card. The lines would stay a major design theme for most of the timeline – the symmetry would not.

Lots of holofoil and that great big centered team logo are great accouterments to a strong debut base design. I’m also a fan of the thick border and nameplate font which we would see again in the ’96 set and also in ’95 Leaf flagship, a personal favorite.

The most different of all the Leaf Limited designs, this base set is bathed in team color, shiny bits, and general character. The stately parallel lines and complete inundation in holofoil are the dominant characteristics this year. The gold foil logo is my favorite one in the timeline as is the great vertical team name in a kind of script I’ve never seen on another card before or since. I’m also a big proponent of the modern, tastefully-spaced nameplate. It doesn’t hurt that Griffey got an especially great photo for his base card this year. For all those reasons, when I hear someone say “Leaf Limited,” this is the card that springs to mind.

More modern and less pretty than its predecessor, this one sports three entirely different kinds of foil. We’ve got holofoil up top and gold metallic foil below with the whole enchilada wrapped in silver foil card stock. While I prefer the brand logo from last year’s design, this one is presented nicely. There are much better uses for parallel lines than the vertical “prison” look, but those babies framed within the thick left and right side borders give an air of stateliness to the card. Plus they make it look taller. Kinda.

For most Donruss sets the break in the timeline happens after 1998, but this one is different. In 1997 someone made the call to nix Leaf Limited and rebrand it as a new-from-the-ground-up brand called Donruss Limited. The new set was so convoluted and weirdly-engineered that it failed after only two years. Why they made this move is a mystery to me, but I have to assume based on what they did release in lieu of another Leaf Limited that they were trying to create a whole new kind of set. They sure did, too, and less than two years later they filed for bankruptcy.

By the time 2001 rolled around a lot of Donruss brands were being resurrected by their new owners, Playoff, and for some reason Leaf Limited was one of them. They hadn’t existed for five years at this point. Why now? Why this one? It’s almost like Playoff was trying to undo the damage done with the introduction of Donruss Limited and get the brand back to where it was just before the downward spiral. Enough conjecture – here’s what Playoff did with Leaf Limited:

My favorite design under the Playoff banner and the first asymmetrical design in the timeline, these puppies are bold. Check out the striking font and extensive team dual-coloration (it looks particularly cool on cards for the Astros and Diamondbacks). They also kept the parallel lines – seemingly the very same ones used in the ’95 design – and worked them into a fun new spiral shape around the logo. There seems to have been a lot of thought put into this year’s design, and it turned out solid. Well done, Playoff.

Despite a great effort in 2001, there was no Leaf Limited in 2002. I have no idea why. My guess is that they spent months creating the greatest card set of all time, and someone spilled coffee on the final proofs and the designers said, “Screw it. We’re not doing that all over again.” On we go to 2003:

Ladies and gents, the first genuinely limited Leaf Limited set. All the base cards are serial numbered from here on out, so it's no longer just a fancy brand name. The lines are once again oriented around the logo here, but they are of a shorter, thicker variety like those found on traffic signs. The massive vertical nameplate feels like it was tacked on as an afterthought; and while this very blog uses a lot of Times New Roman in its title, I just don’t buy it on most baseball cards (I said most - '92 Studio rocks Times New Roman like a beast). It’s not a particularly ugly design, but it’s also not particularly memorable.

This year we got a return to the symmetry of the 90’s designs. I really like the low-profile nameplate and team logo over a field of extreme-zoom team logo, but there’s one thing missing from the design this year: parallel lines. We get a few perpendicular lines splitting corners around the diamond-shaped logo, but that’s it. A staple of Leaf Limited design elements is gone forever.

Leaf doubled-up a lot of the checklist this year, so there are actually two Griffeys in the base set. The other is card #173. It is identical apart from the photo, blurb, and card number.  For the purposes of the Timeline I am only showing the first base card.

They brought back the lines but the uniformity is lost. Now it leans more towards that lines-for-the-sake-of-lines thing that Upper Deck did so much. It’s a good-looking card, though, and not altogether out of place in the timeline; but the randomness of the lines is just not very Leaf Limited to me.  This has always been a set based on orderliness and symmetry.  Even when the symmetry was removed in the '01 design there was still a balance to the layout.  That's pretty much gone.  Still, this is cool card, and I love the simple, mid-mounted nameplate.

That is where the Leaf Limited timeline ends. Since then Panini has acquired Playoff and, therefore, Donruss and Leaf. We’ve seen them taking these defunct brands and running with them back into the collector card market in recent years, but among the first of their unlicensed offerings was a very bizarrely-dated (for baseball, anyway) 2011-12 Panini Limited set. They even kept the logo more or less the same though they used a more stylized “L.” There was no Griffey in that base set, but he did make it into a few inserts.

Hence the Limited name lives on under a different banner. Could this be the end of the Limited Timeline as well? Kinda. Three resurrections later I have little doubt we’ll see that cursive “L” grace some more logo-less cardboard in the near future, but it won’t be Leaf Limited.  Apart from that we have no word on the return of a brand featuring the words "Leaf" and "Limited" in any proximity to one another.

Whether you like the designs or not, you have to respect that this brand did have a unique identity as the "modern beauty" of cardboard.  The design progression makes perfect sense, and the cards have just enough in common with one another from year to year to unify the timeline. The first few sets are great, too, particularly that beautifully-assembled ’95 design. I didn’t even show you the card backs. Those are a real treat, all gussied-up with holofoil and great layouts.

I should also mention that the quality of the printing stock only got better set-to-set.  Towards the end it's almost like plastic which I mean in a good way.  The quality was high.  Despite that, I still feel like I could damage the mirrored surface with a light thumb graze.

All that being said, I don’t really have an emotional connection with any of these sets. Frankly, back in my collecting heyday I resented them for their exclusivity, price, and inclusion of innumerable impossible-to-find Griffeys. I’m still a little raw about it. Really, they could have retired the brand after the ’96 set and I wouldn’t feel any different.

Here again are all the Leaf Limited designs at once and in order: 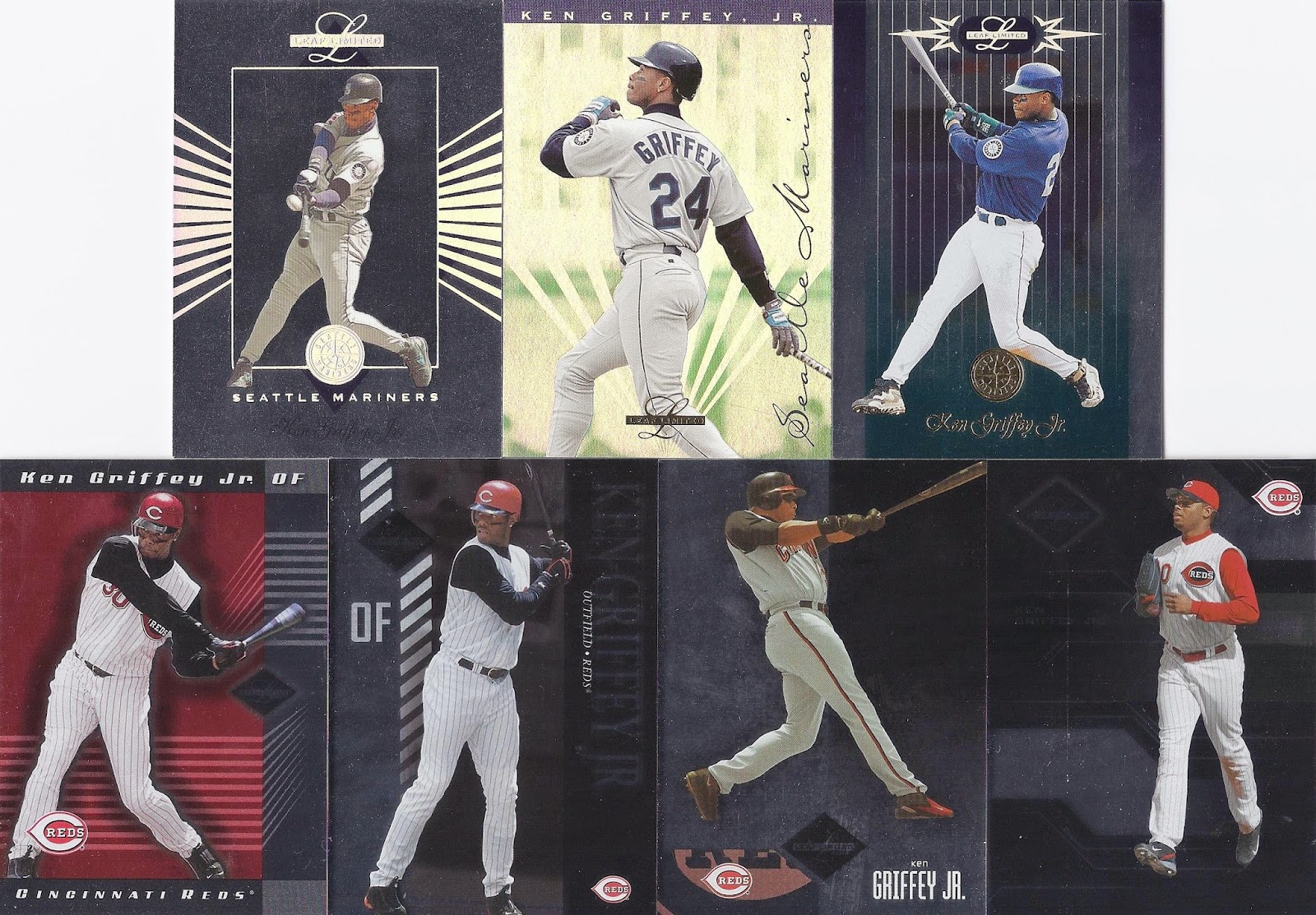