I try to keep up with trade packages, but it's tough when you're a bit of a flibbertigibbet which I most certainly am. Some of these cards I received in just the last few days and some (it appears) were scanned back in August. August. What I'm saying is that that kind of irresponsibility should bar me from being allowed to trade, and yet my fellow bloggers still send me great cards all the time. I am appreciative of every one.

Steve from The Card Chop e-mailed me to inquire about this bizarre-but-amazing Nabisco card: 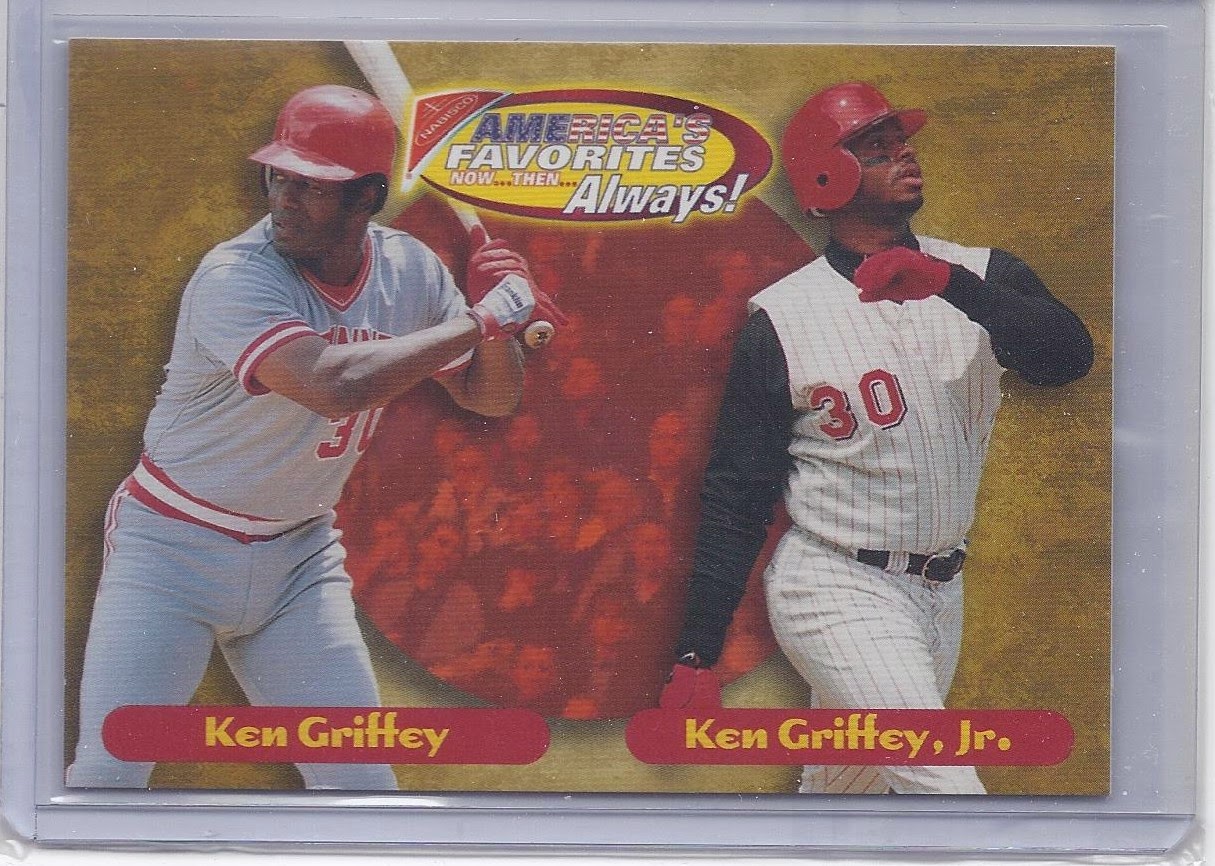 It's a Jr/Sr combo, a sub-collection of mine within the Griffey collection, and it's a food issue I've never come across. And check out that weird red crowd background. I knew I had to have it. Steve made it happen super quick, too - just days later this was in my mailbox. I am currently rounding up a bunch of food-issue cards for him as well as one really nice Braves card I found at the card show yesterday. I think you'll be pleased, Steve. Thanks again!

If you've been seeing a card on the blogs a lot lately featuring a guy dressed as the Hamburgler, that would be Wes of Jaybarkerfan's Junk. While he's currently taking a sabbatical from blogging, he's the trade partner of your dreams, and a few months ago he dropped some cardboard on me. 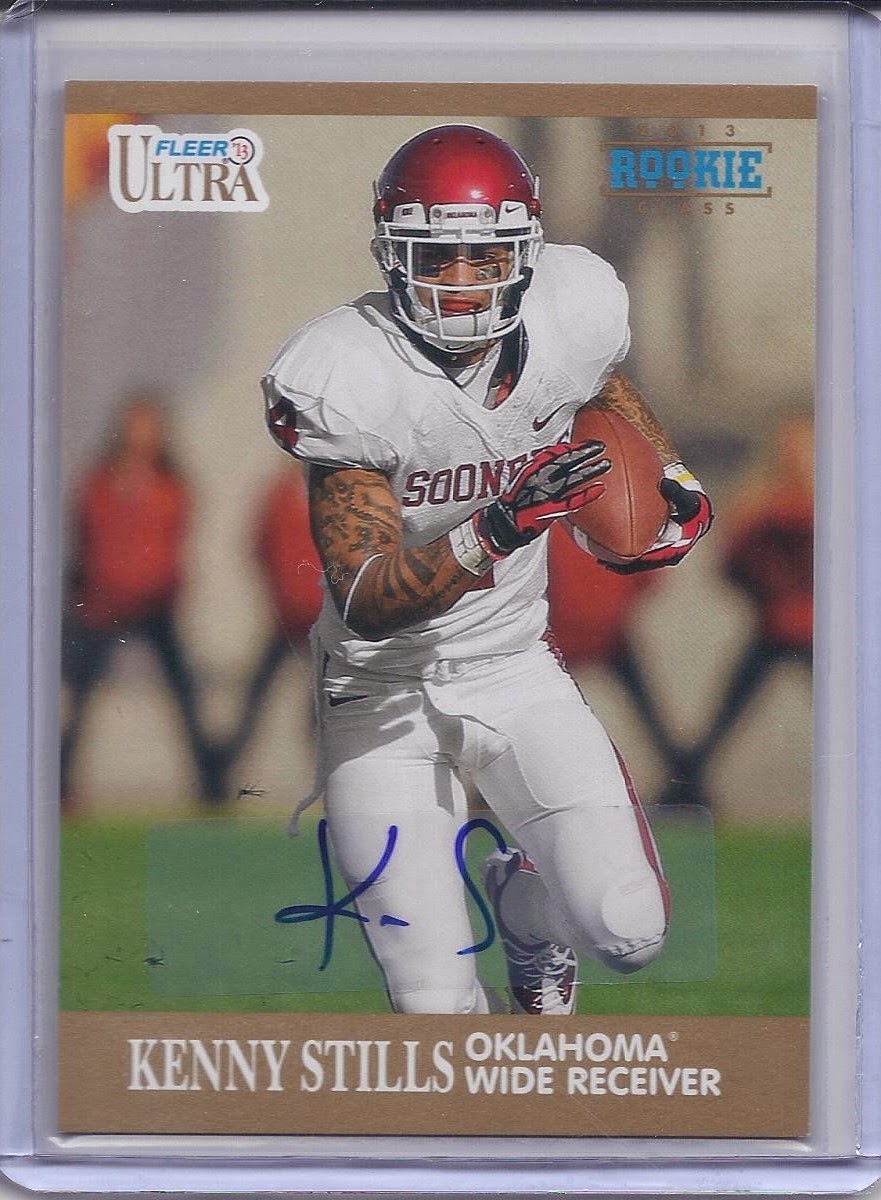 Wes was offering up a bunch of autos and relics as trade fodder, and among those was this Kenny Stills, a rookie wide receiver now with the Saints. We're glad to have him, too. We need all the help we can get.

His blog is still up, and it's great. Full of premiums, relics, autos - all super nice cards. The guy's got taste. Thanks, Wes! I don't remember what I sent in return, but if you're still accepting trades, let me know. I do have some stuff to send your way... 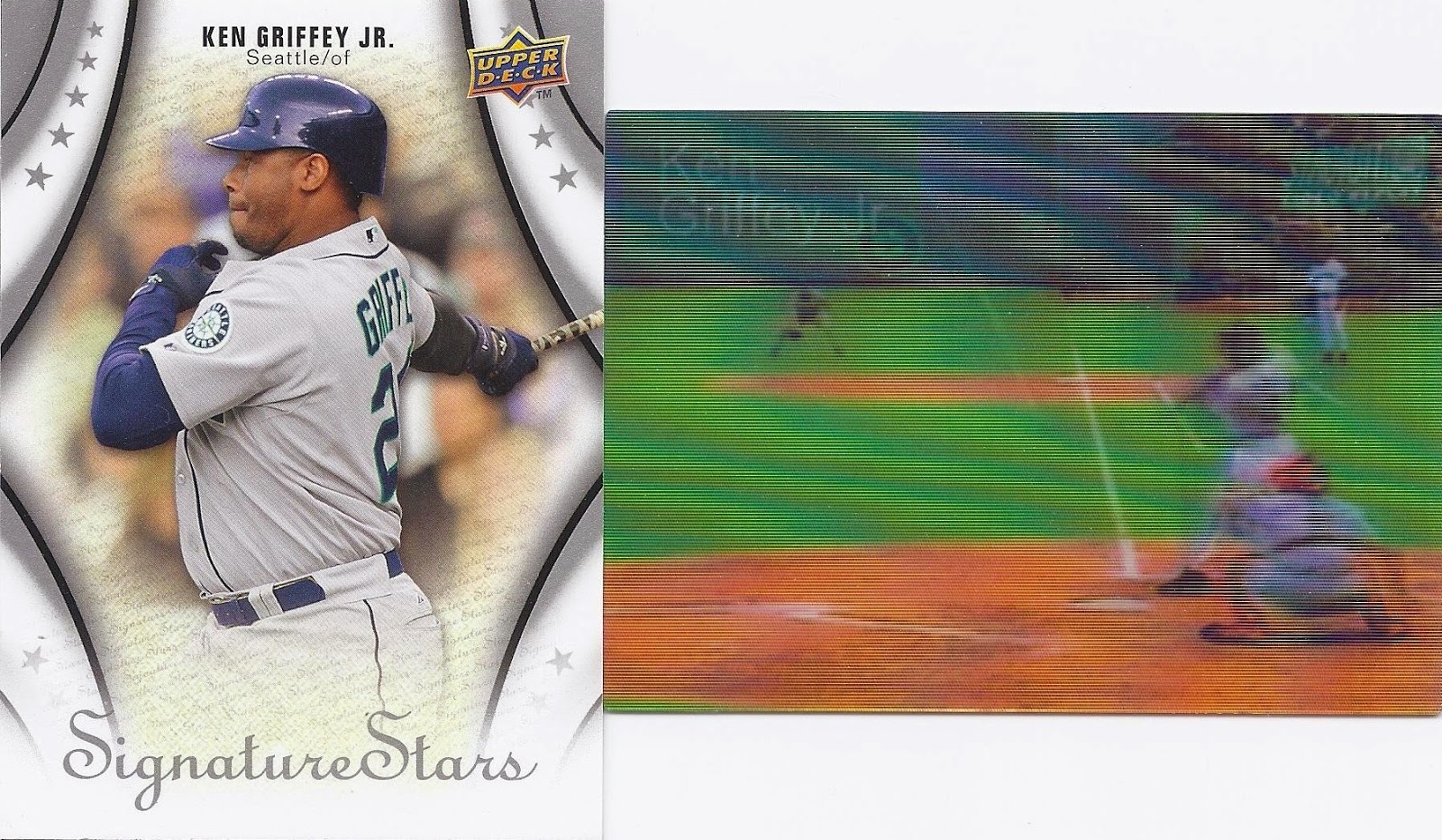 I got this PWE from A.J. at The Lost Collector, one of my regular reads on the blogsphere. The card on the right has the feel of an oddball, but it's actually a lenticular Stadium Club insert that depicts the entirety of Junior's sweet swing. The card on the right was a collection need as I, embarrassingly enough, only had a parallel version. So yes, these were much appreciated, A.J. Thanks, bro!

jim from garvey cey russell lopes was my one of the first people i traded with, and we're still finding cards for each other. for example, jim launched this attack on a few of my pc checklists: 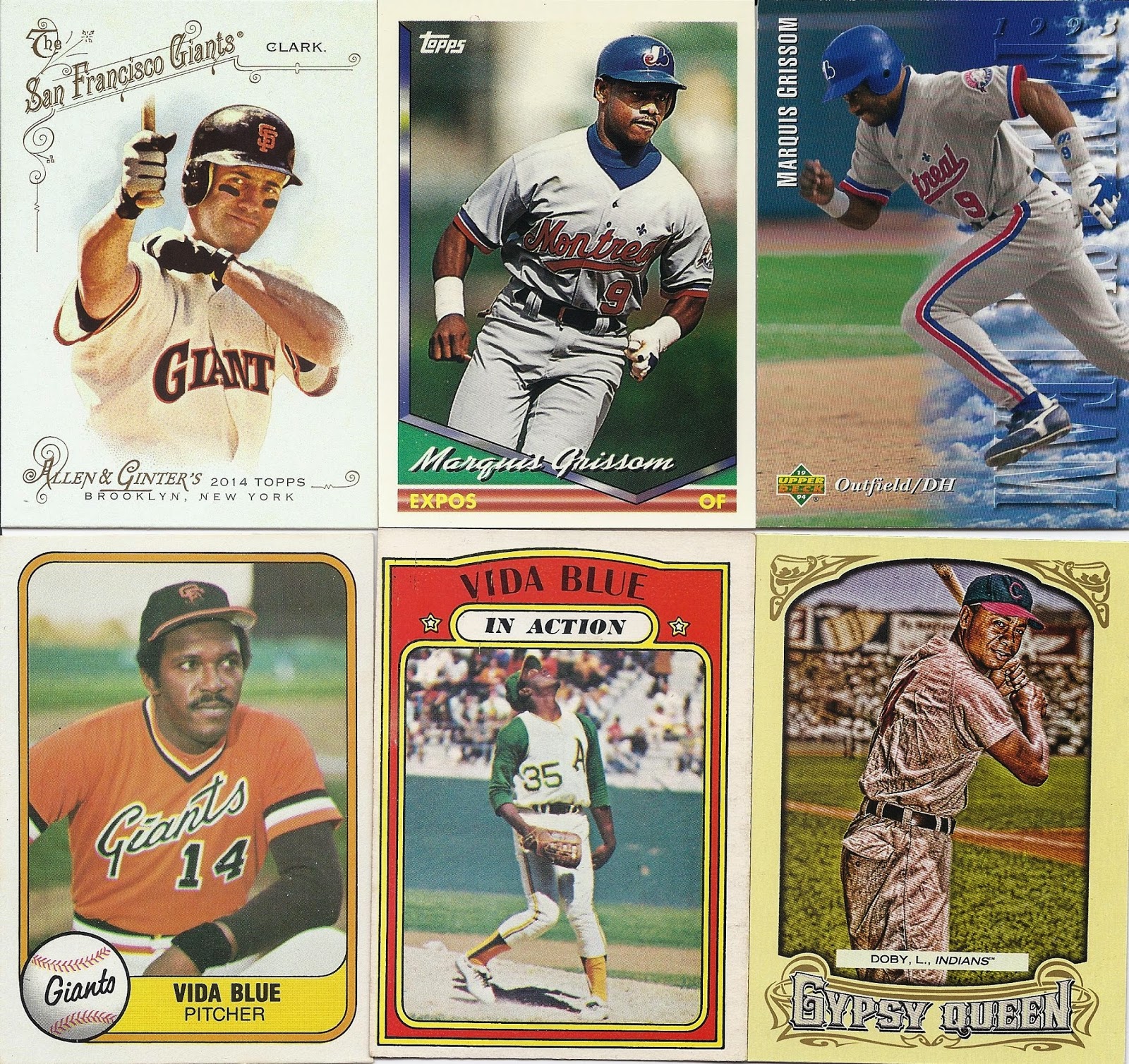 i love that a&g clark with the thumbs up. great picture, topps. we also have a genuinely vintage vida from his heyday and one for my most recently-added pc, larry doby. fantastic. 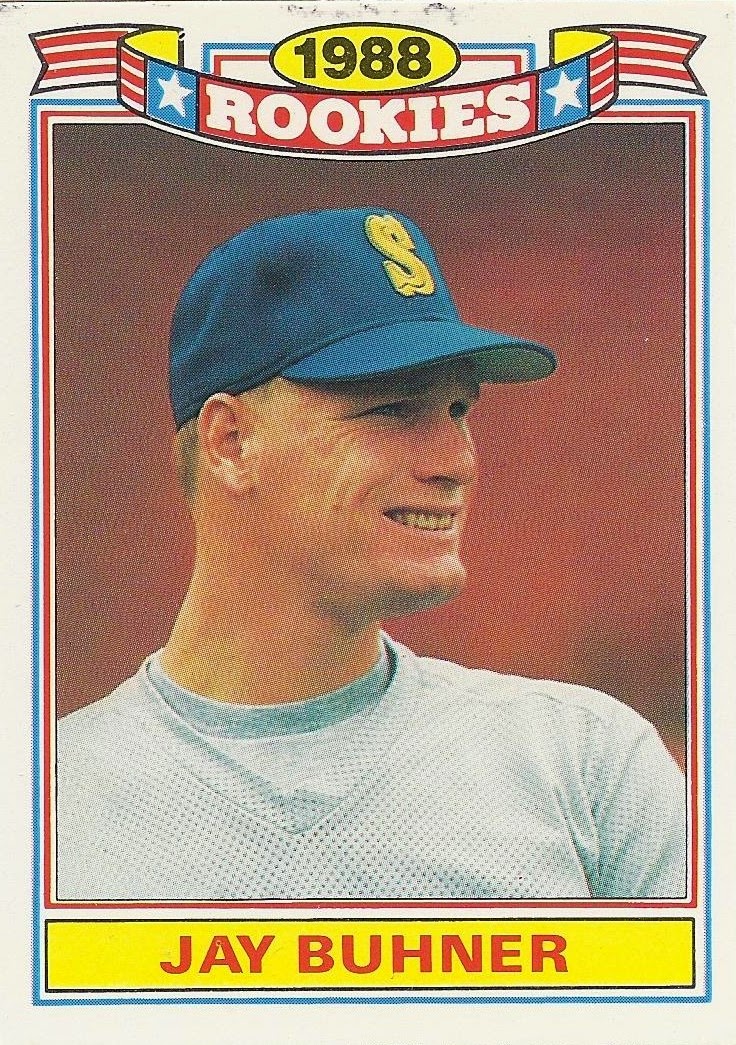 this is the card that had me all aflutter - a beautiful topps glossy rookie issue of a very pre-goatee bone and his toothy grin. this was the first time i'd ever even seen this card, so it was a great surprise. well done, jim!

Jeff at 2x3 Heroes is also a longtime trade partner, and he went above and beyond with this stack of Griffeys: 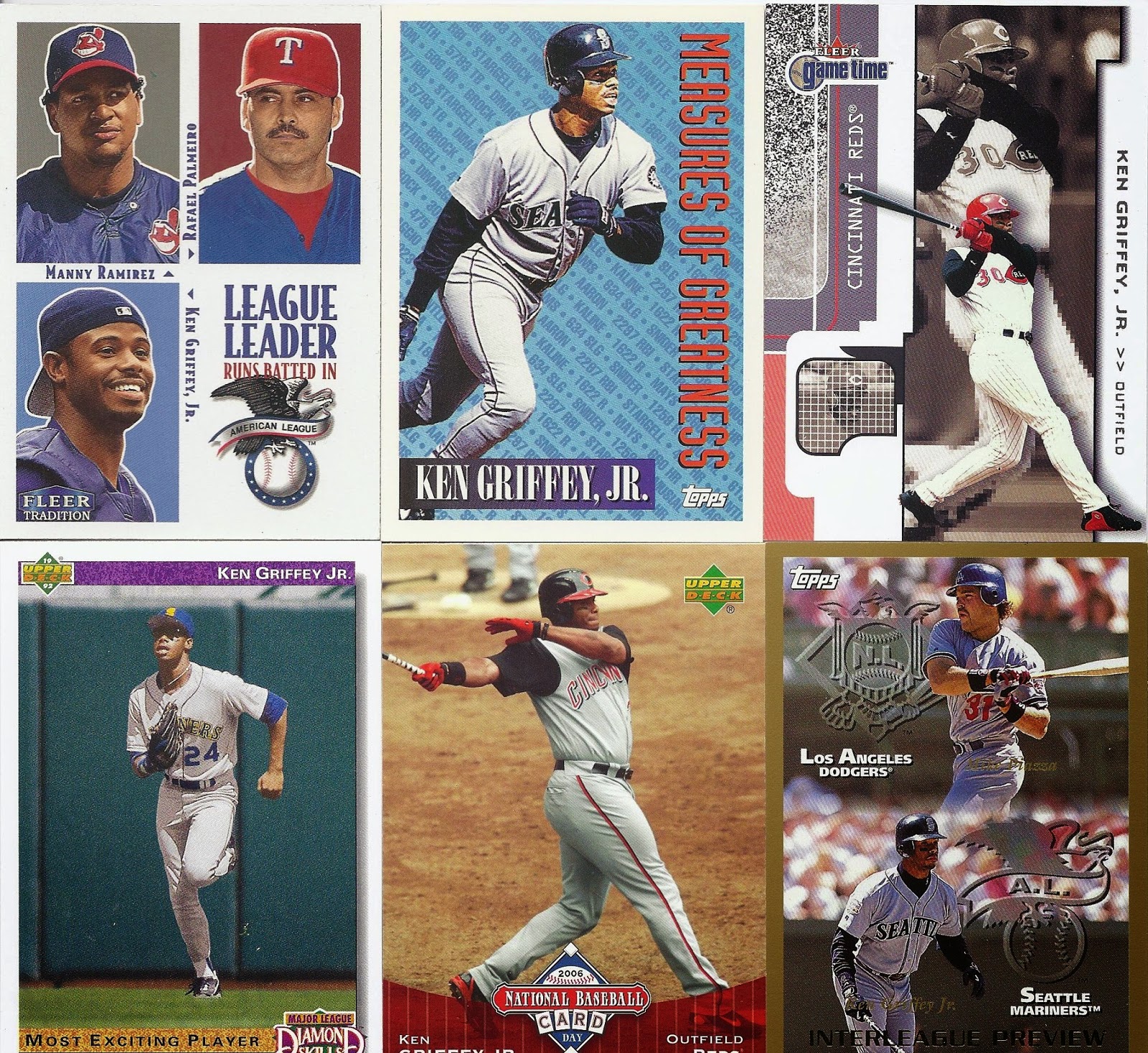 I cannot possibly own enough copies of that Interleague Preview card with Mike Piazza. 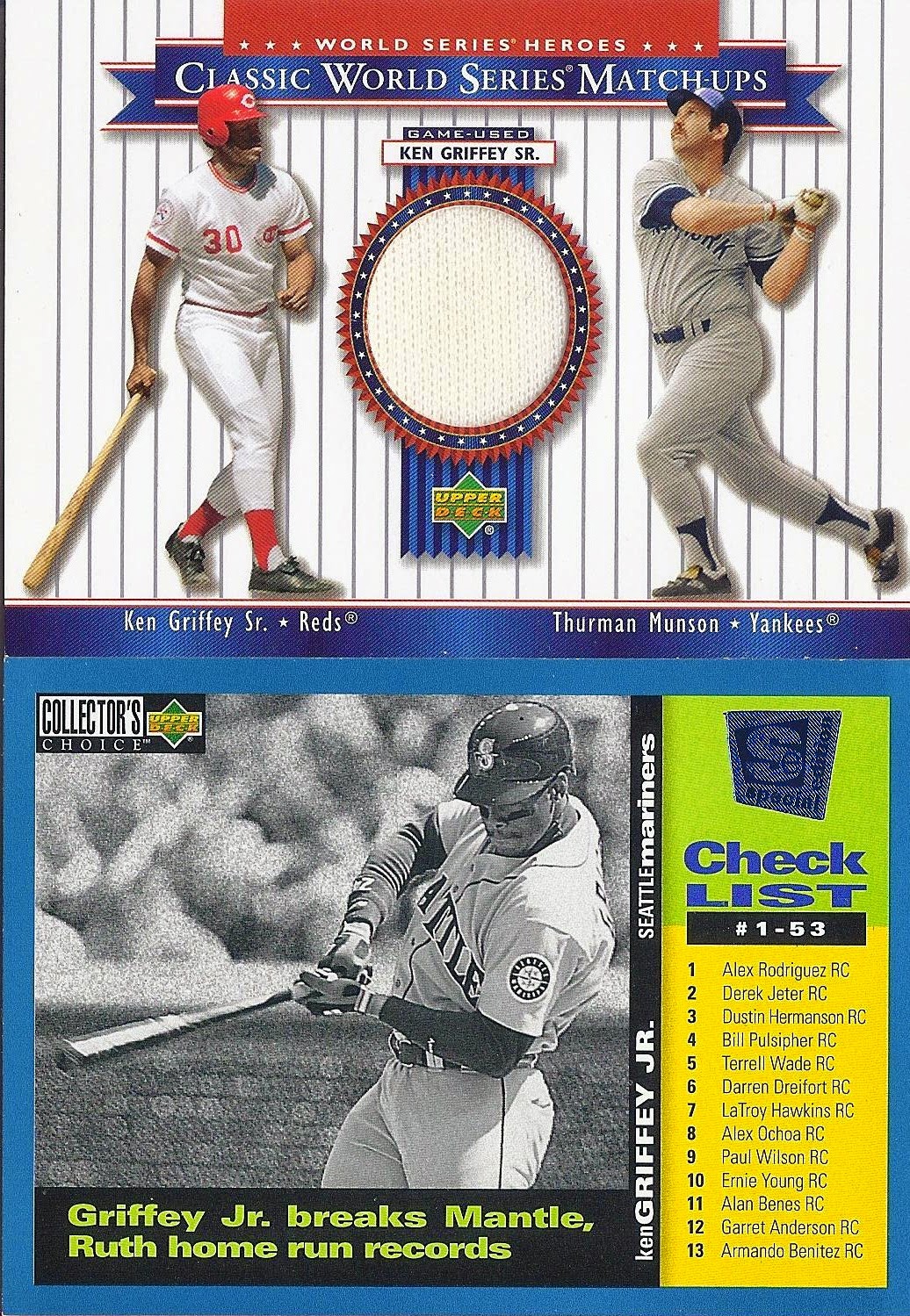 A lovely Griffey, Sr. relic featuring Thurman Munson and one of the greatest checklists ever designed. 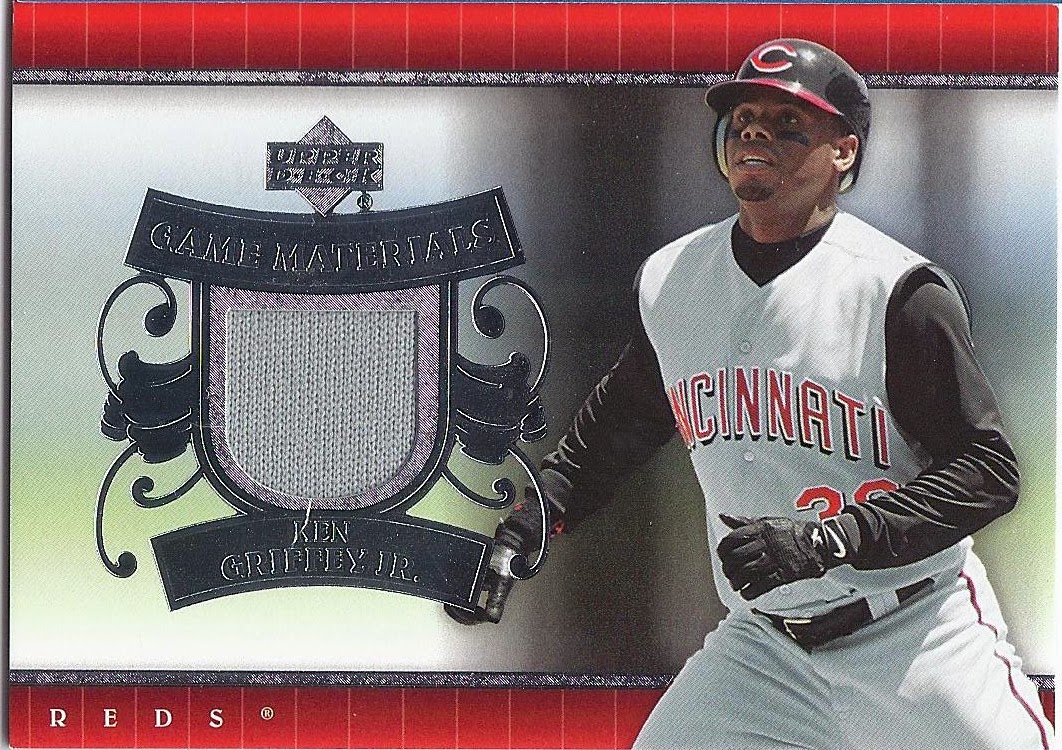 Wha!?! I get a lot of cards via surprise trade packages, but very few Griffey relics. This is one I've never come across, so yeah. I woo-hooed a lot when I saw it. A few hundred more and I think I'll be able to stitch together my own authentic game-used Griffey jersey.

Thanks a ton, Jeff! The ball's in my court now. Oh, and this is for you: 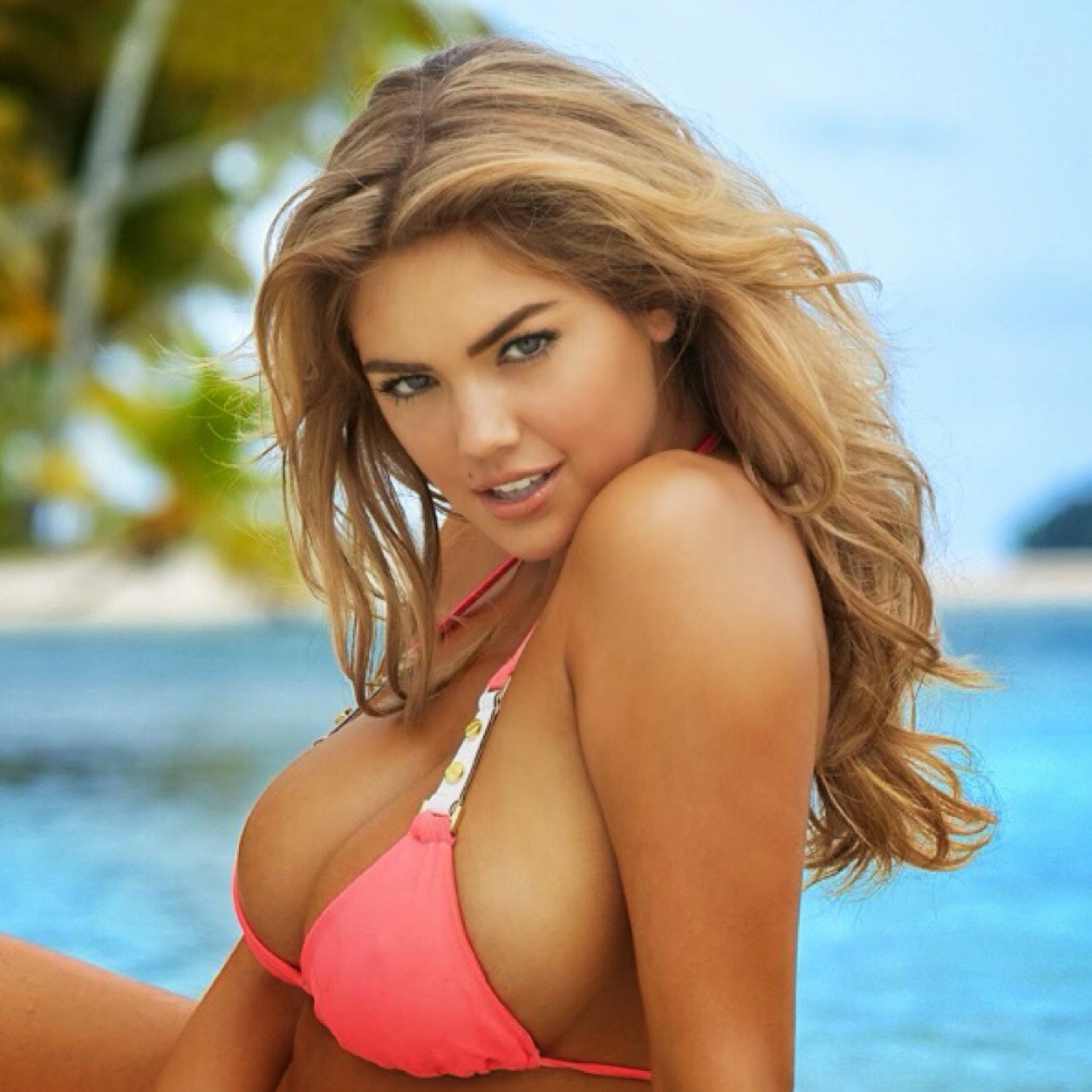 Finally we come to Chris from Nachos Grande who I believe has written my address on more packages and envelopes than anyone else simply for the fact that I participate so much in his group breaks as well as the occasional trade package. 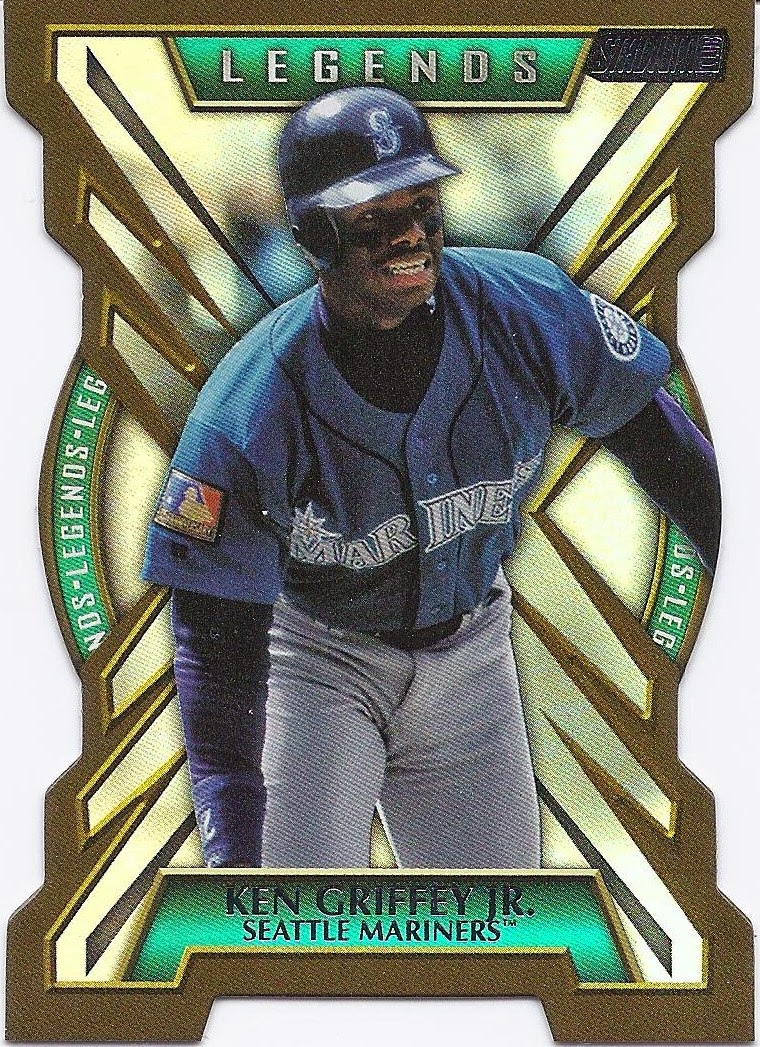 His 2014 Stadium Club group break was my first experience with the product, and I was lucky enough to end up with a sweet die-cut insert of the Kid (and very little else for the Mariners). But Chris makes it right by busting bonus packs and even send out cards from his own collection.

For example, looks like somebody broke some Collector's Choice packs: 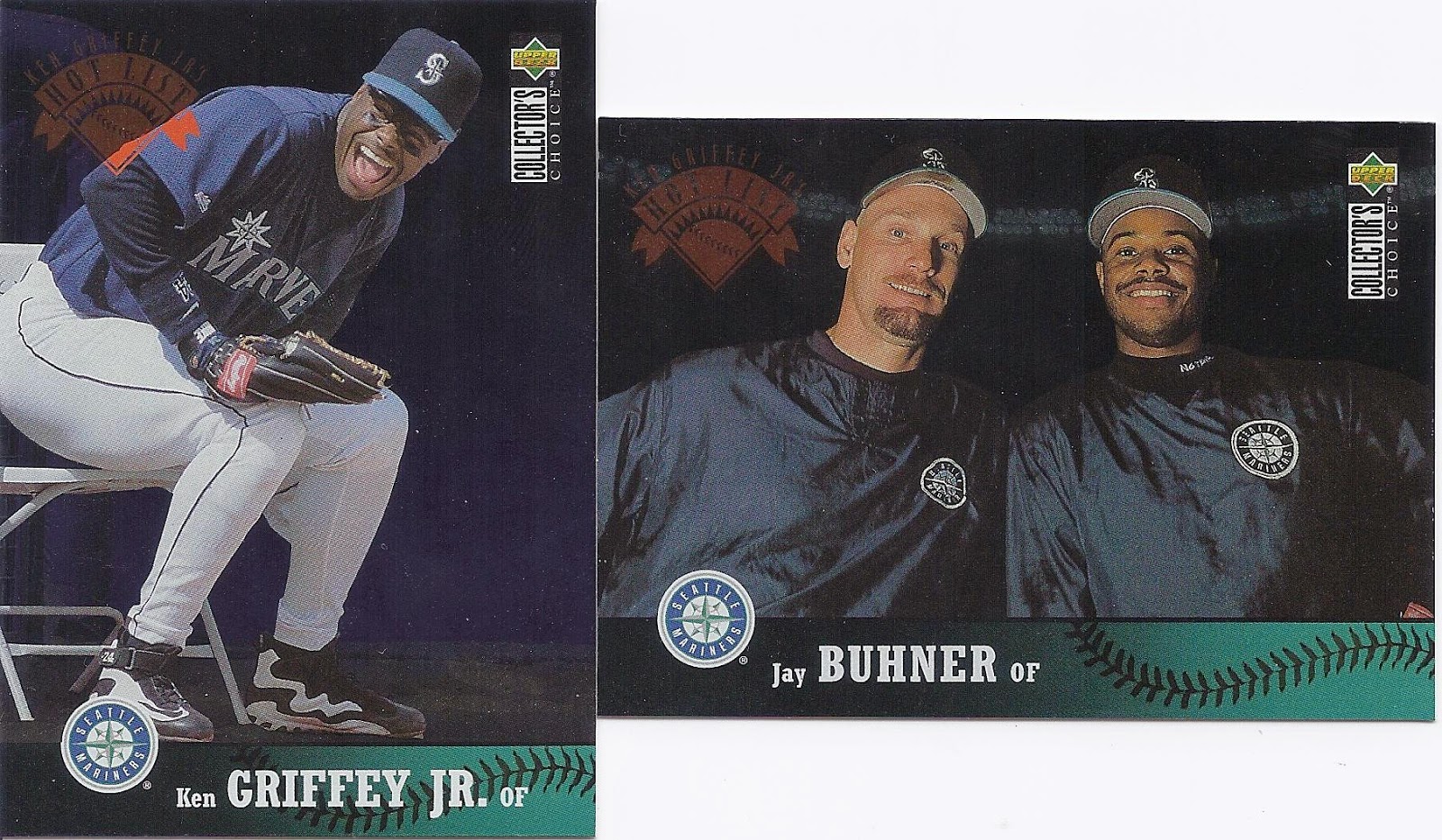 The Junior/Buhner best pals Ken Griffey, Jr.'s Hot List insert is one of my favorite things ever, and it looks even better next to the regular Griffey from that set. By the way, how do you add yourself to your own hot list? 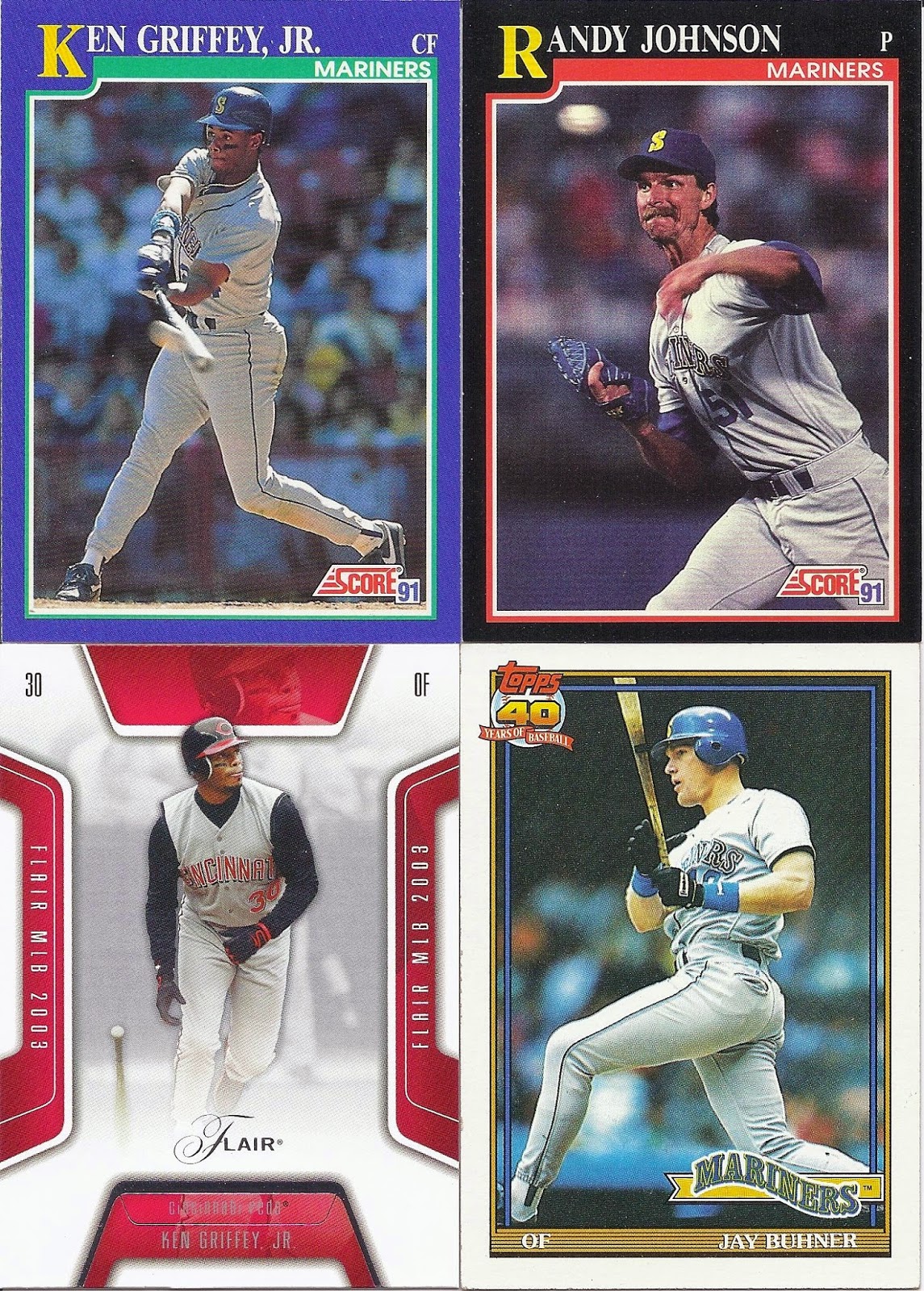 I love that Randy's expression on that '91 Fleer card. Congratulations, Big Unit! 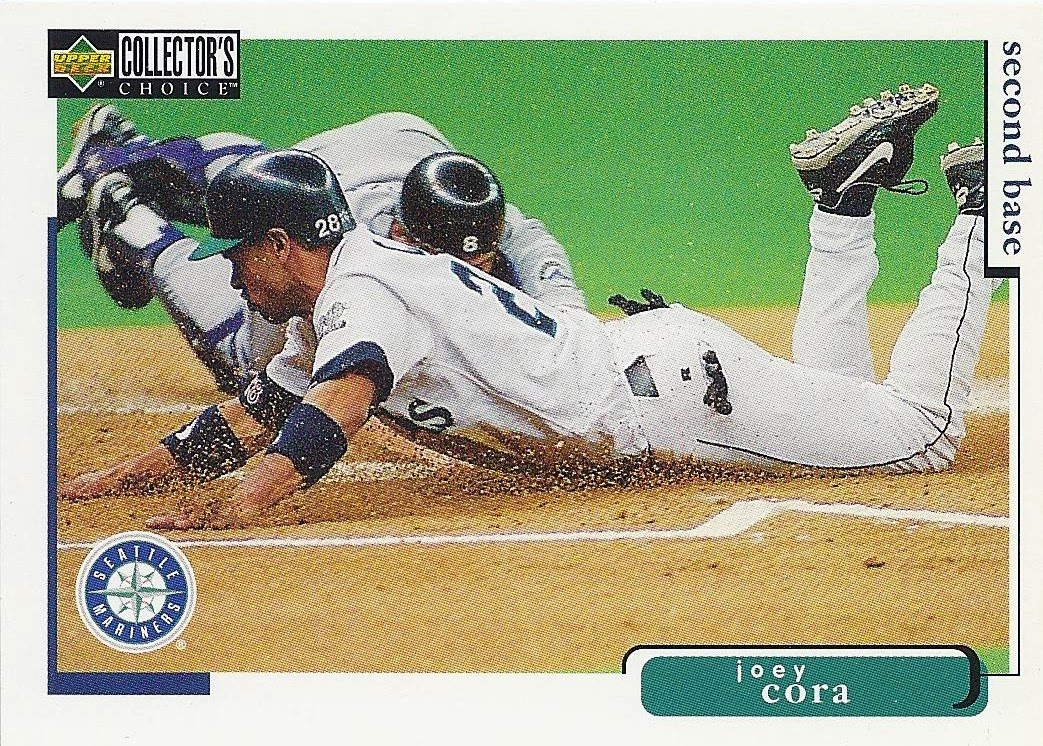 Joey Cora is one of those guys who lives in that weird space between official player collection and just guy whose cards I keep. I know there's at least one other Cora collector out there, and I don't want to step on his toes, so I'll keep him off the official PC list...for now. 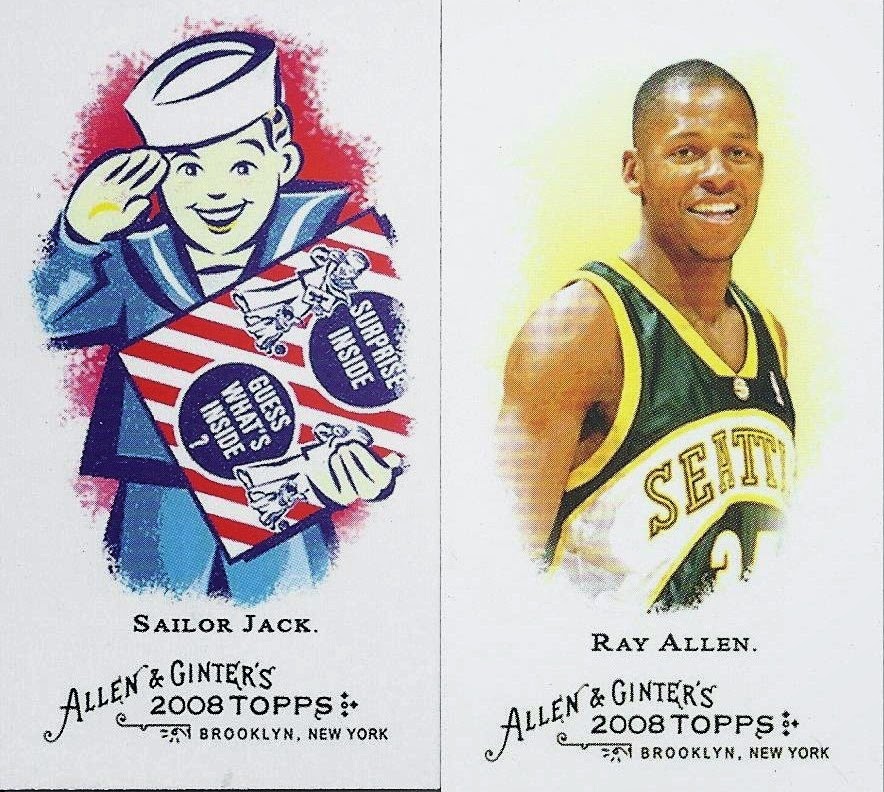 Finally, Chris is the #1 source of these completely original A&G knock-offs that include such names as Spiderman and Chris himself. I'm holding out hope that there will be a Griffey someday soon, but in the meantime these are pretty great.

Thanks a bunch, Chris! I have a stack of Reds coming your way that grows by the week...

There are a few more trade packages I need to catch up on, so look out for those in the coming...er...months. Thanks for reading.

Oh, there's time for one more, I suppose: 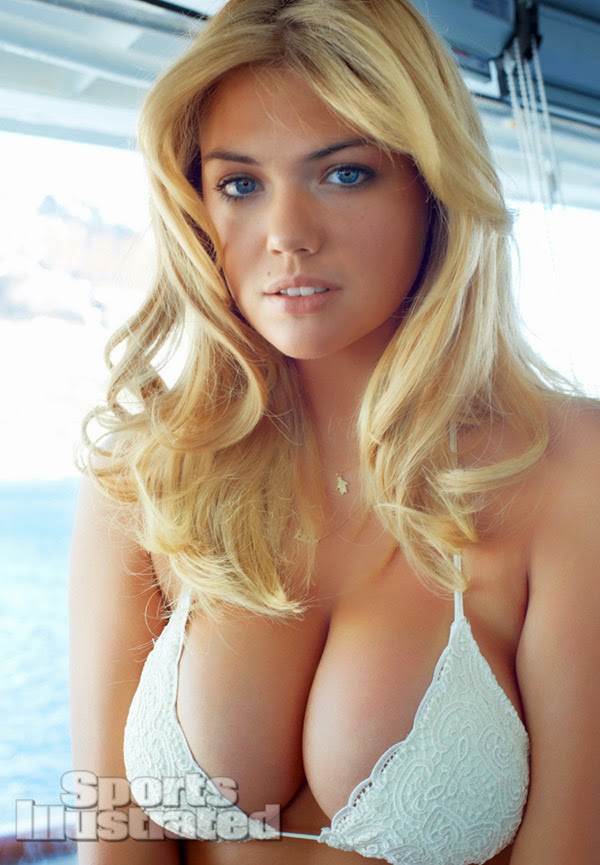 Posted by The Junior Junkie at 2:34 PM