Sing the Praises of the Nachos Grande Group Break! 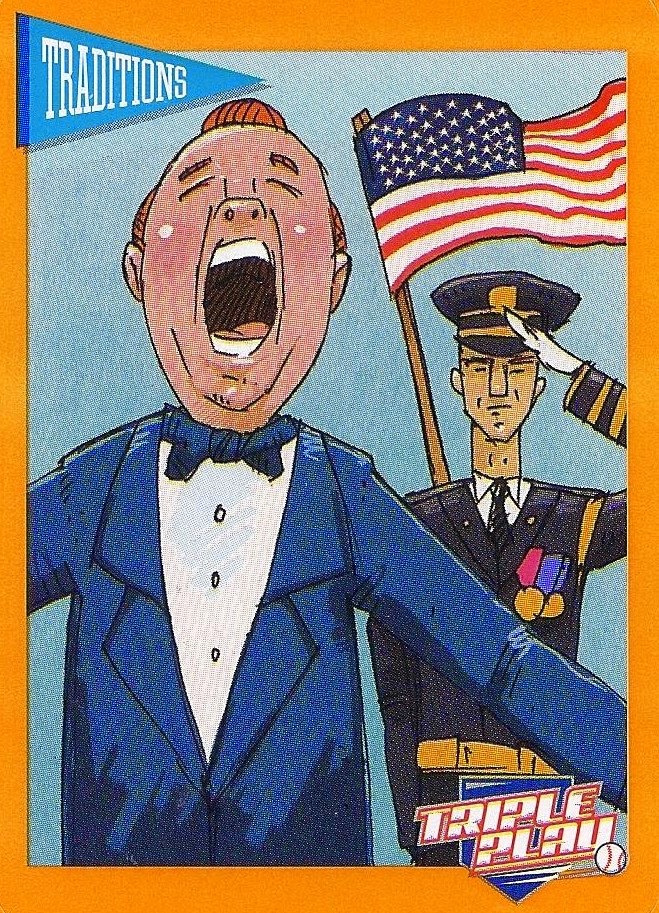 If you haven't yet gotten around to joining a Nachos Grande group break (and if you're a Mariners fan, sorry I always take 'em), you are missing out. I've done well over a dozen now and love every one.

Even when I don't end up with new Griffeys or monster hits, I still walk away happy because Chris throws in extras from his own collection that make the whole thing worthwhile every time (though I'm certain he must be running out of Mariners extras by now).

This most recent break was one of the priciest I've joined (ever, not just from NG with boxes from Topps HIGH TEK and 2014 Stadium Club to name a few. The Mariners ended up with very few cards from the main boxes, and yet I came home from a trip to find a flat rate box loaded with sweet Griffey and Mariners goodies! That's about the closest thing to good group break "customer service" as I can imagine. 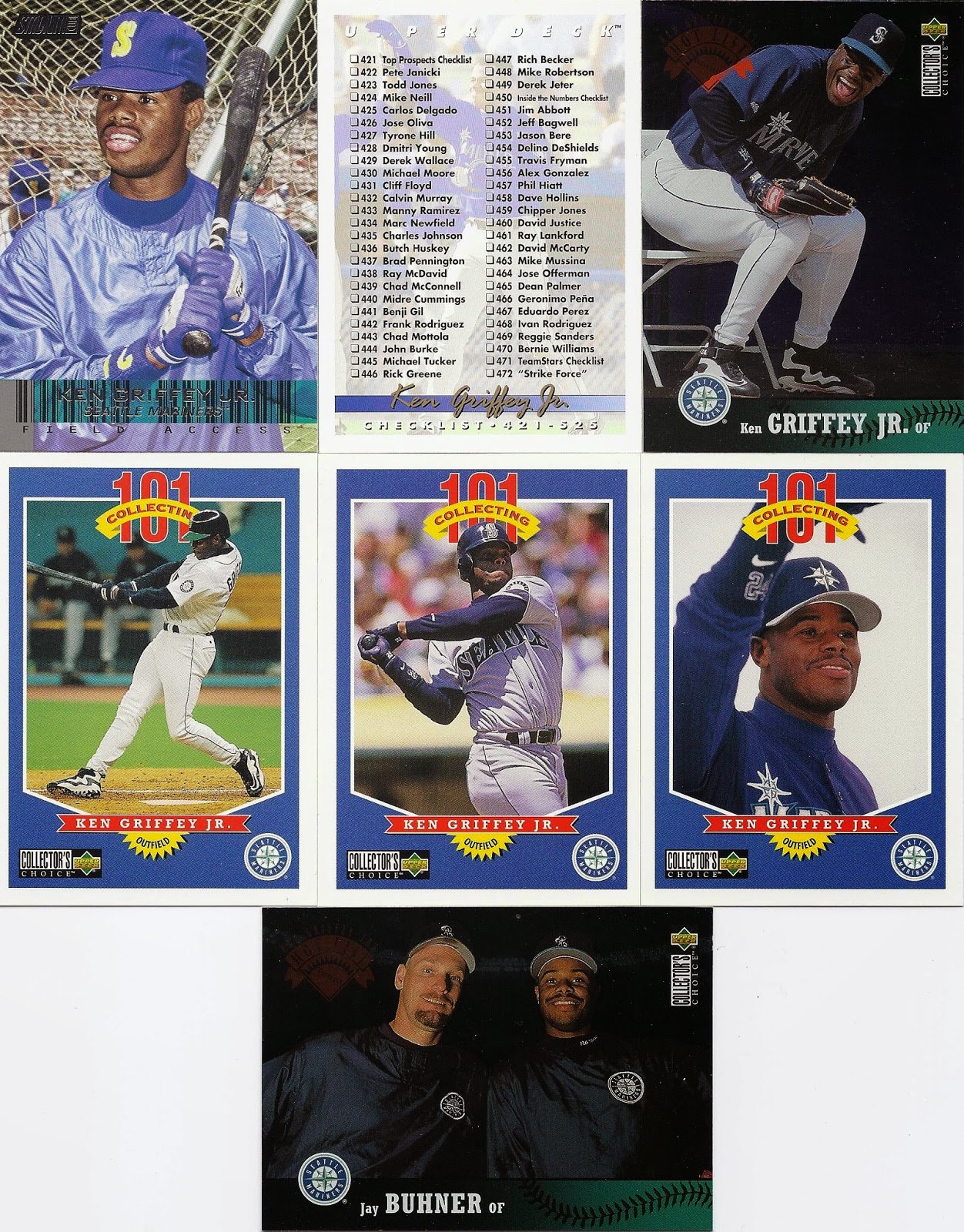 Griffeys! All dupes, sure, but I'm more than happy to give them a home. 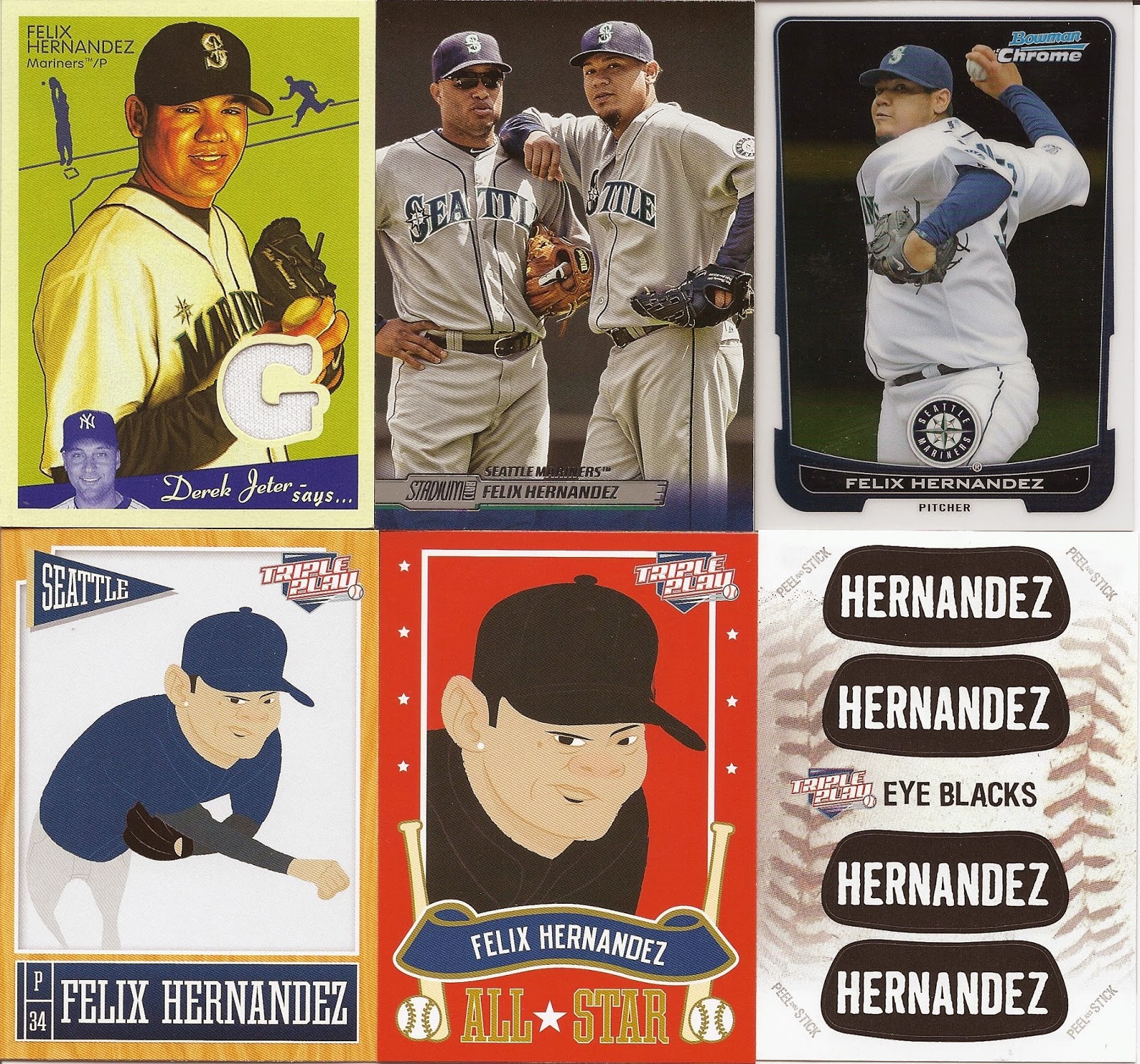 My King Felix hit collection has been growing in thanks to some generous traders. Check out the sweet relic on the top right. Those eye blacks are also a hit of sorts in that they're about as rare a card as I could have expected to pull from Triple Play. I really like these and lament their Griffeylessness. 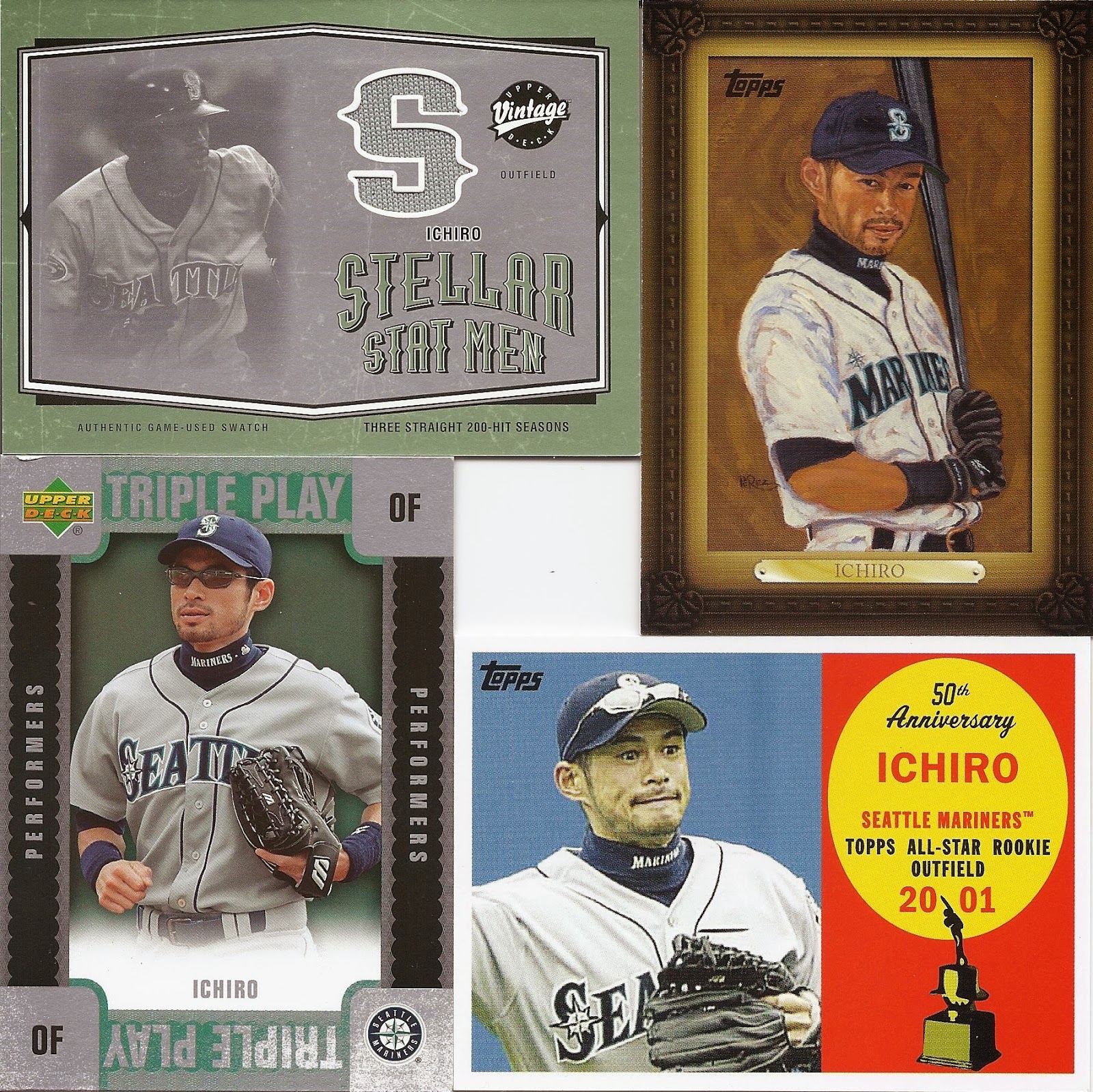 Claiming the Mariners in a group break always leads to plenty of Ichiros. Check out that lovely Upper Deck Vintage relic. That is one great-looking card. And those Topps painting cards always remind me of "The Kramer." 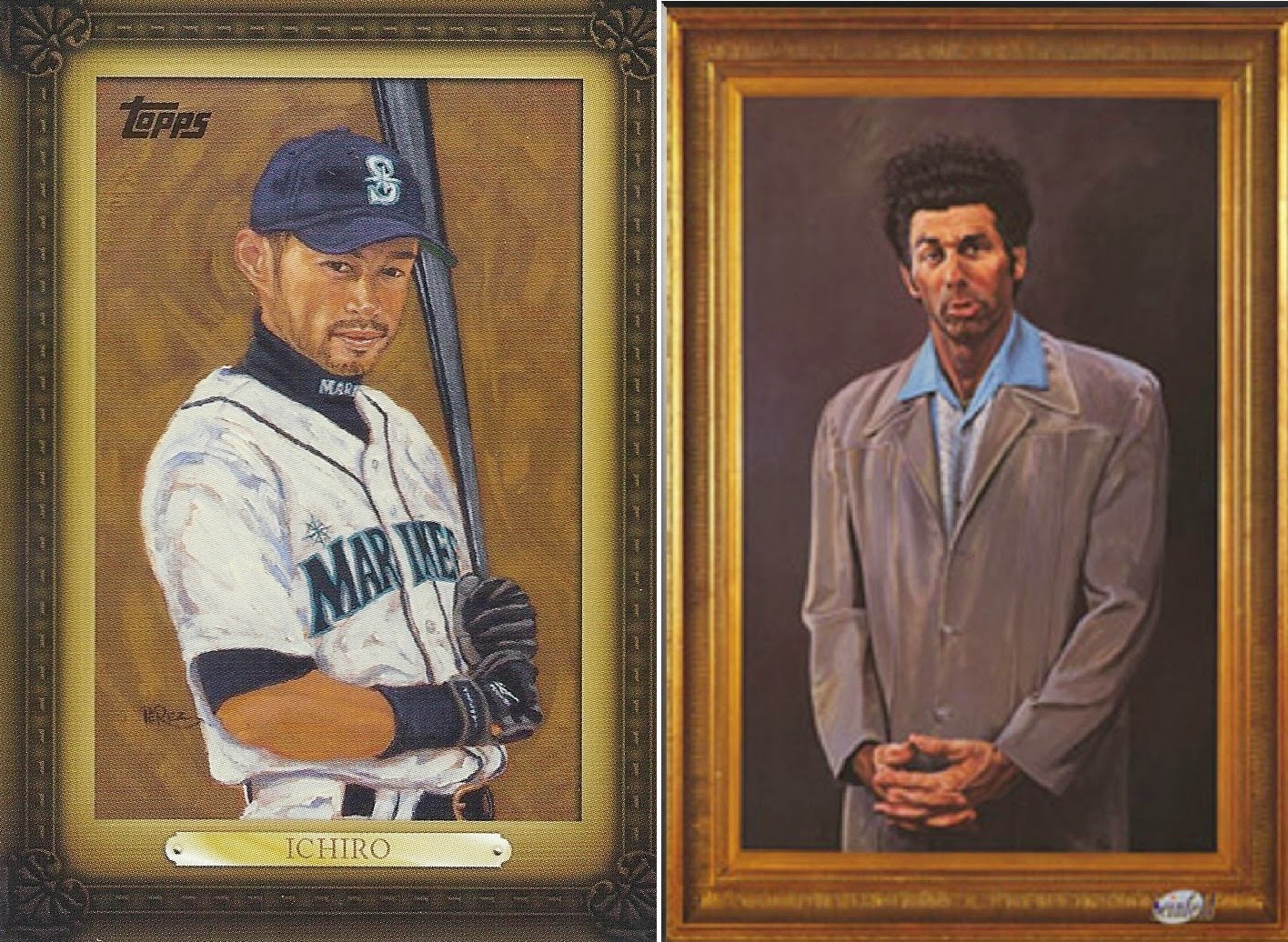 Is it just me? 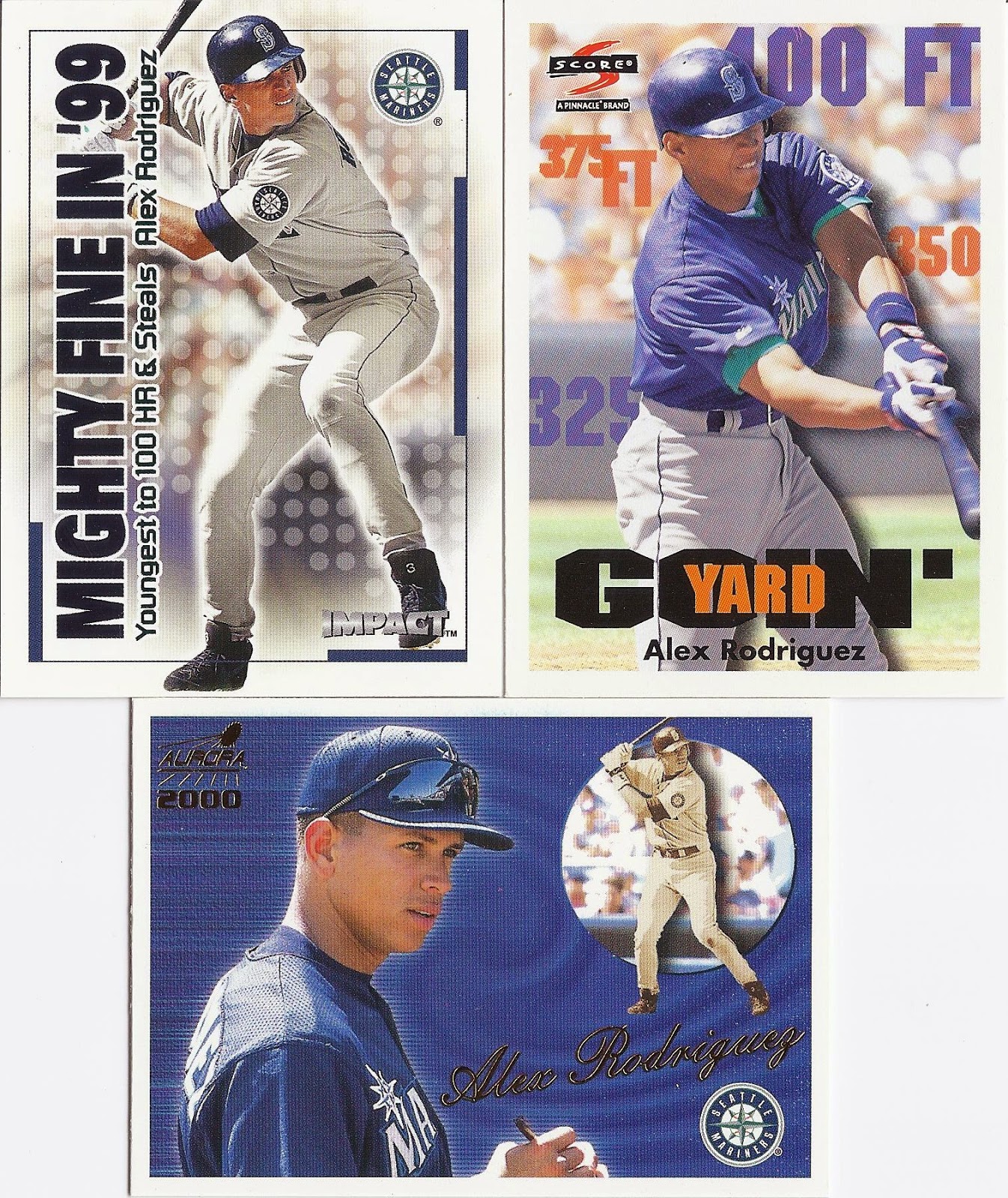 I still get excited about A-Rod cards despite the recent unpleasantness. Looks like an autograph shot at the bottom there. 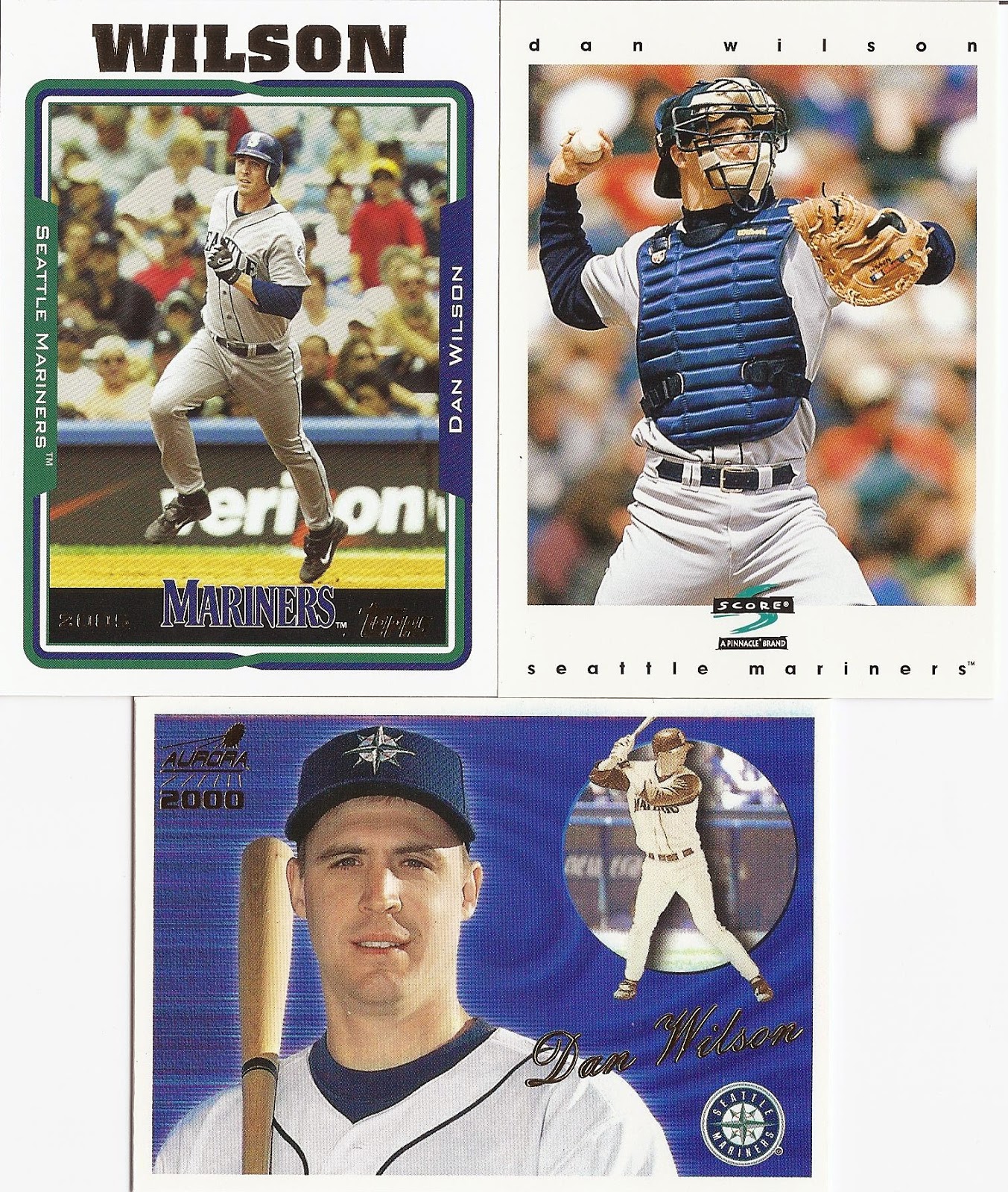 My rarely-mentioned PC of Mr. Dan Wilson got a few new additions, too. 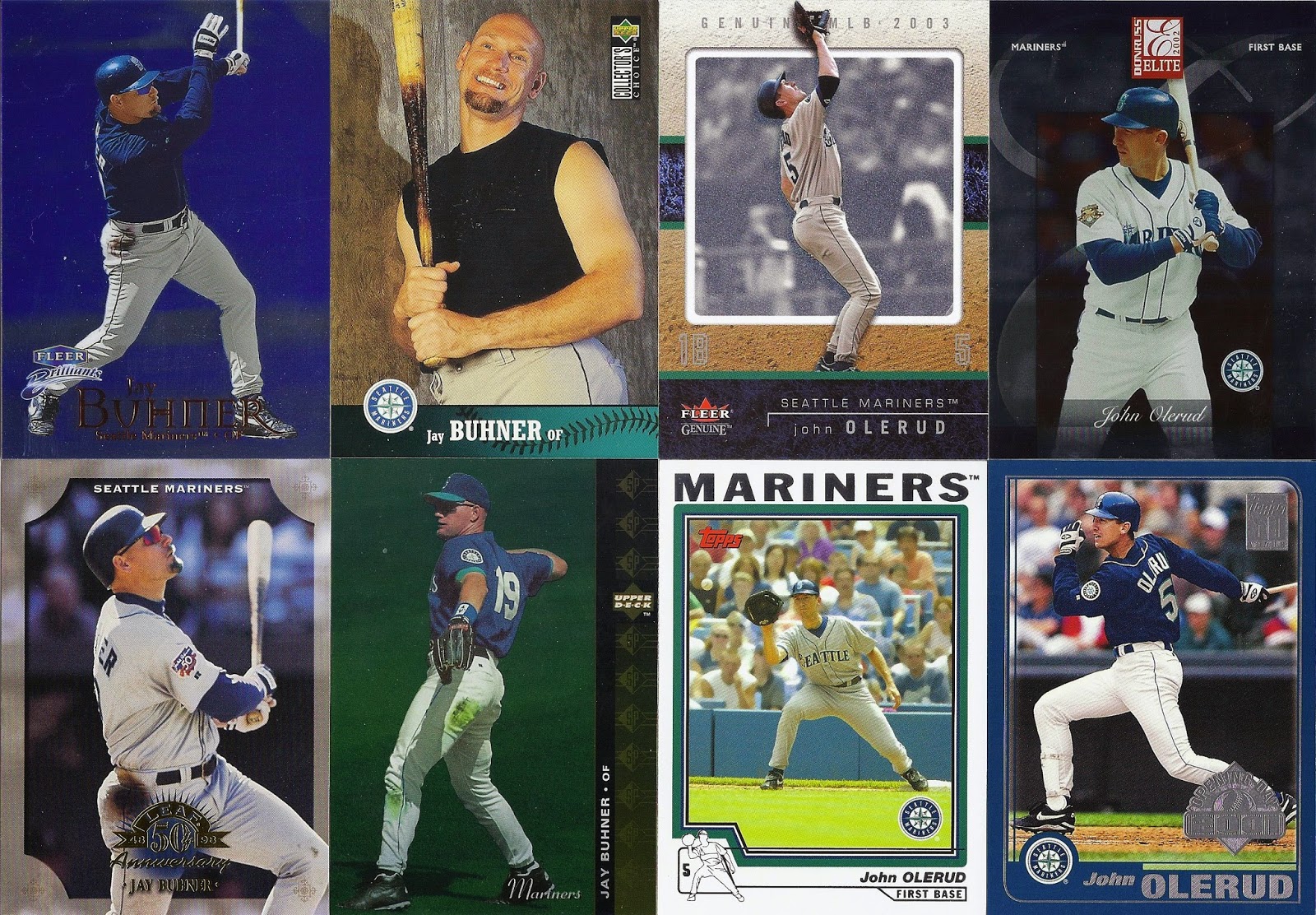 Buhners and Oleruds! John joined the team just after Junior had already left. This saddens me because I'd like to see a card or two featuring the eventual pair of Hall of Famers. Blue Fleer Buhner is one of my favorites from the entire box, but that '97 Collector's Choice base card has a secret, too: 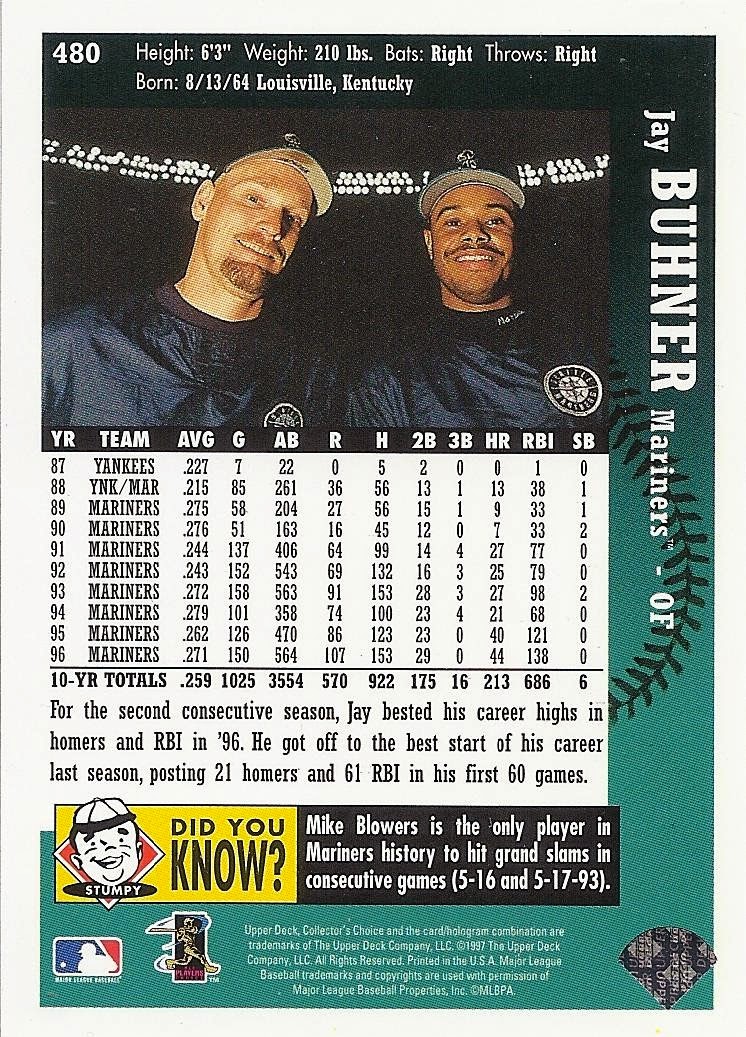 It's a reverse cameo! Or should we call that a card back cameo? I like "reverse" from my coin-collecting days. Anyway, it counts! 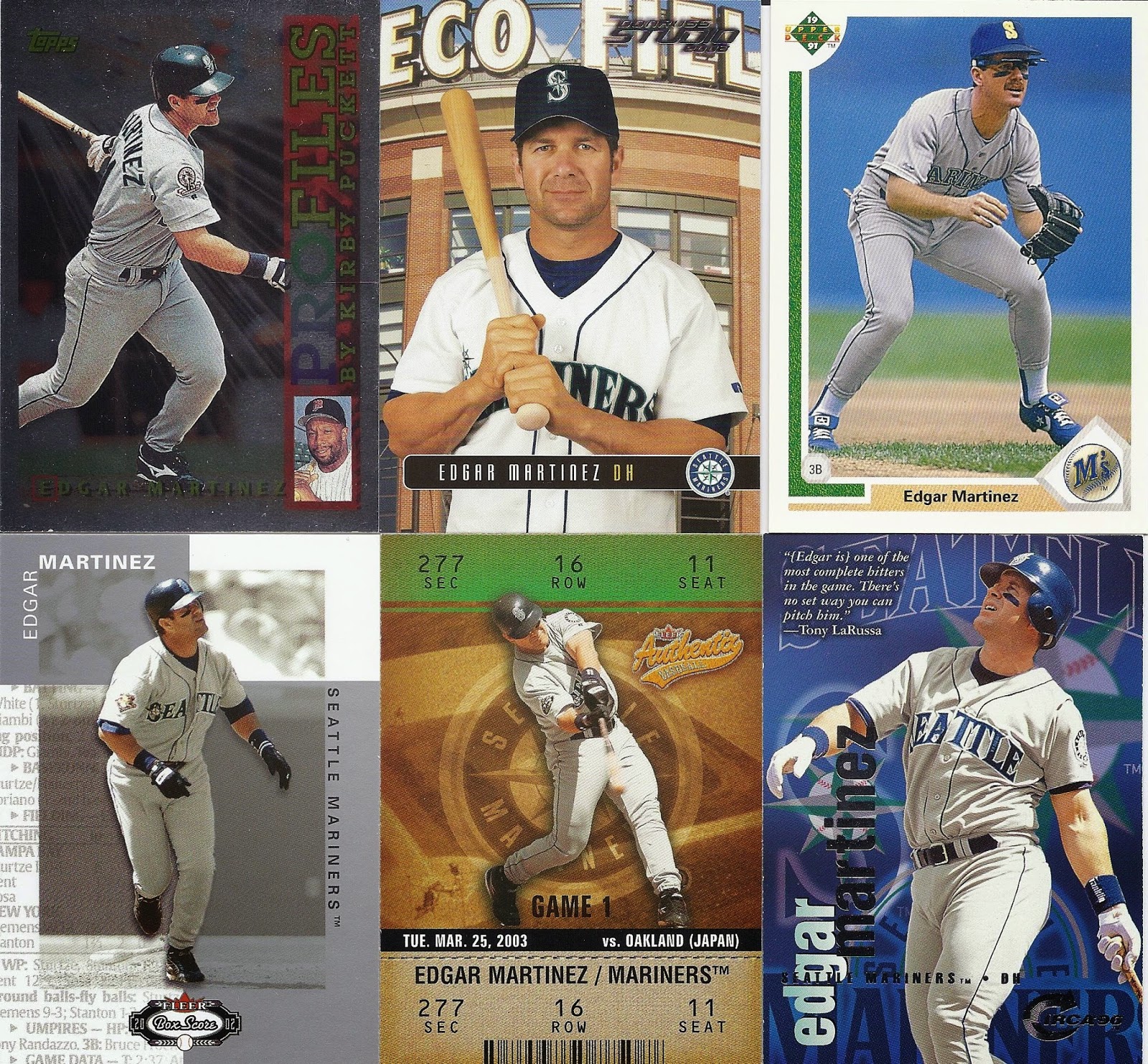 While he's not a PC of mine, I have a LOT of Edgar Martinez cards. Anybody know anybody who collects him? I think I might make someone's day in a trade... 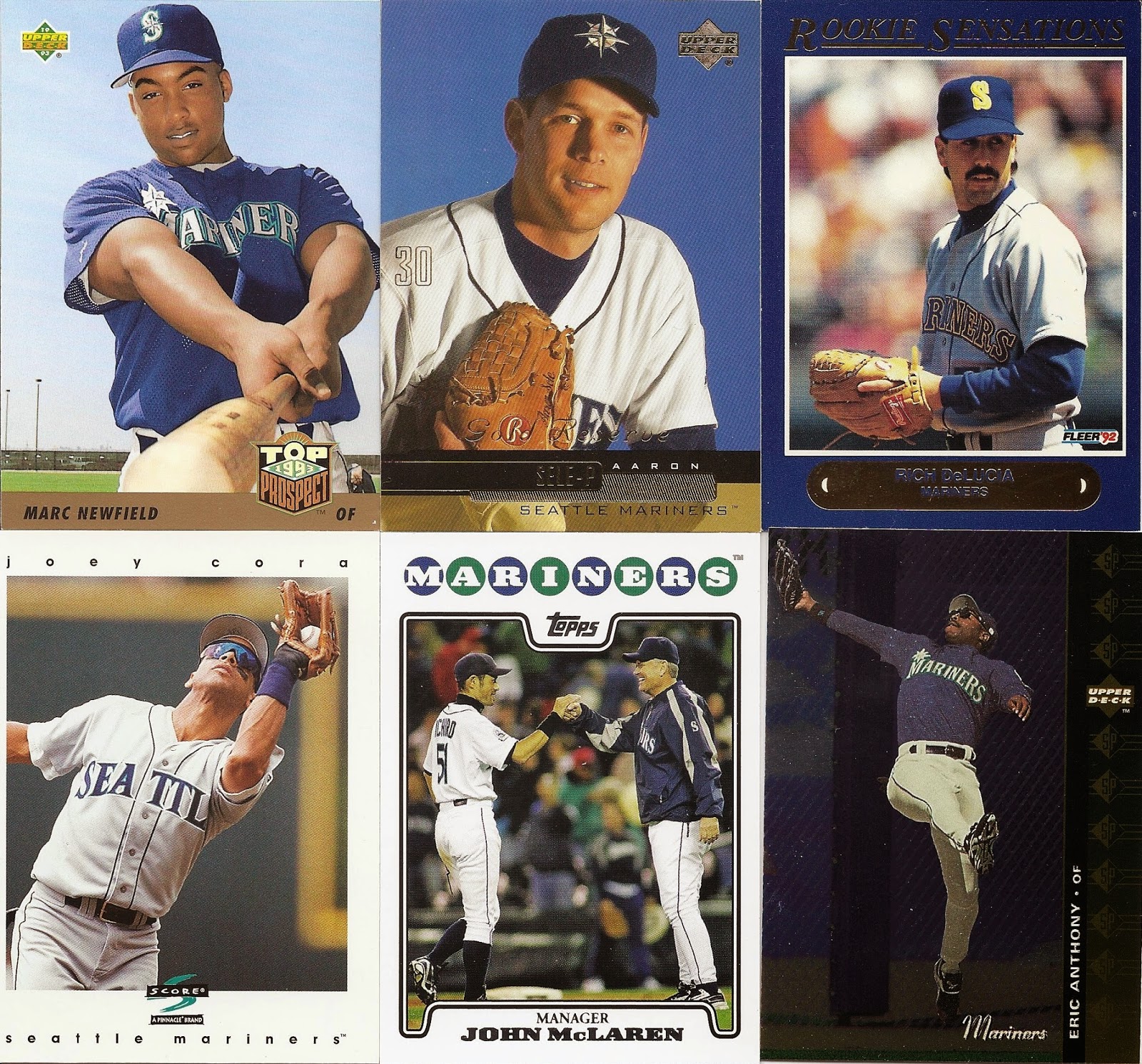 Just a bunch of great Mariners cardboard. That John McLaren Ichiro fist-bump is probably my favorite card in the whole box despite the great relics and Griffey cameo. One excellent manager card! 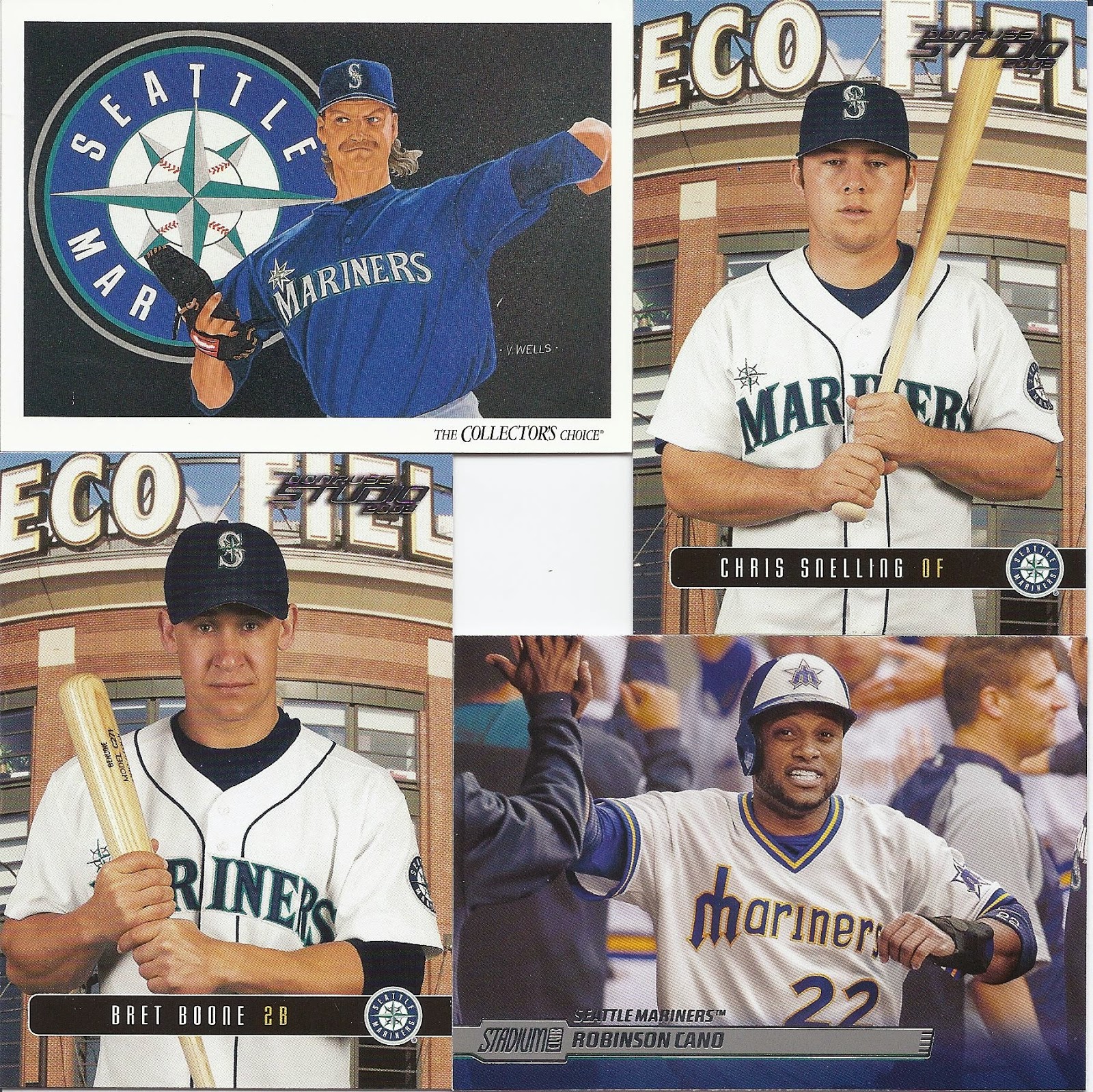 These I posted because a) I love that 2014 SC Cano and b) I wish I wish there was a Griffey with that Safeco Field backdrop. Ah, what could have been... 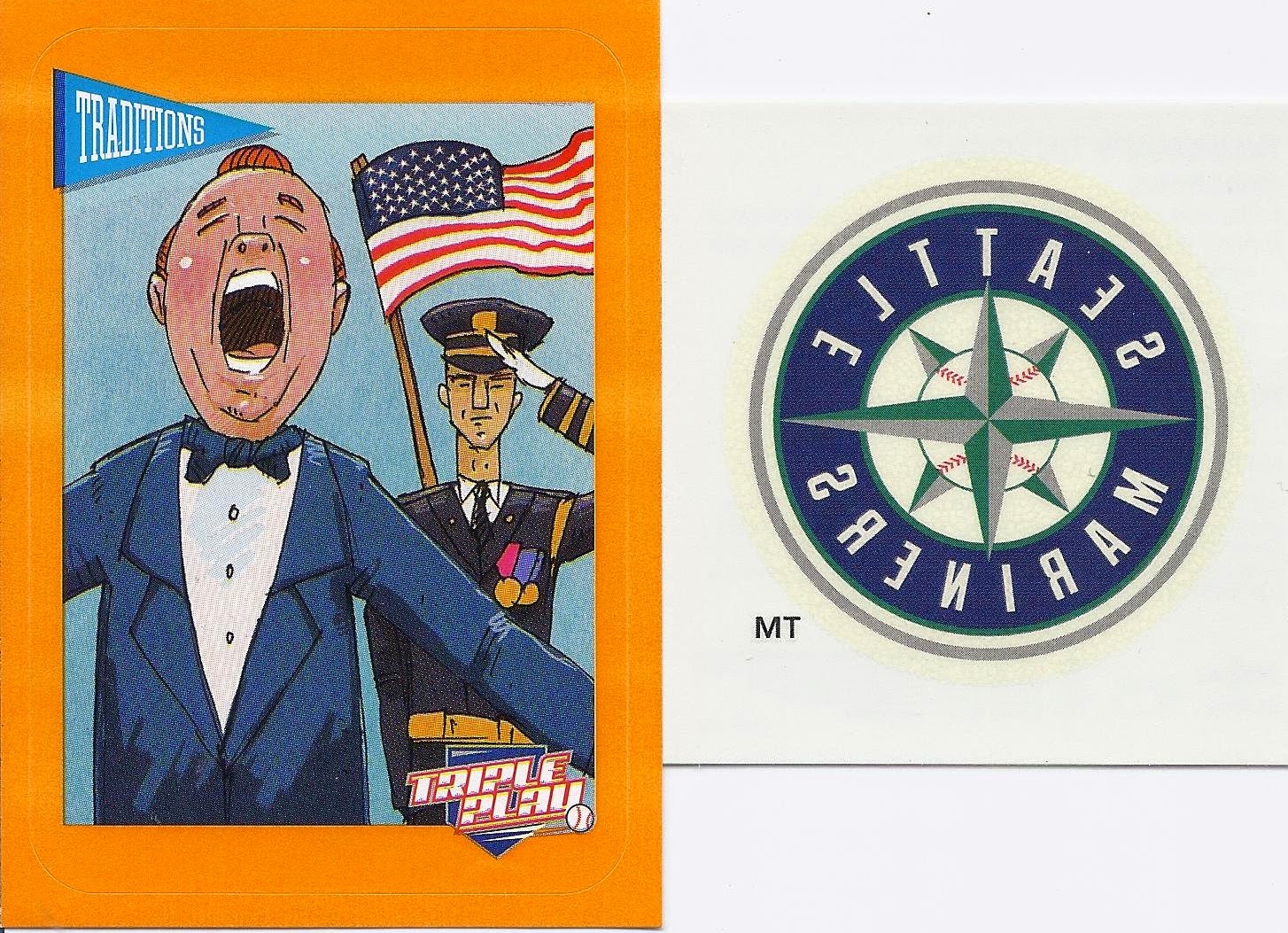 You've already seen that TP sticker which I absolutely LOVE. I don't know where or when I could rock the M's temp tattoo. Perhaps when they get to the World Series I'll give it a go. In the meantime it's going in the General Mariners cards section of my Griffey binder (yes, there is such a thing). 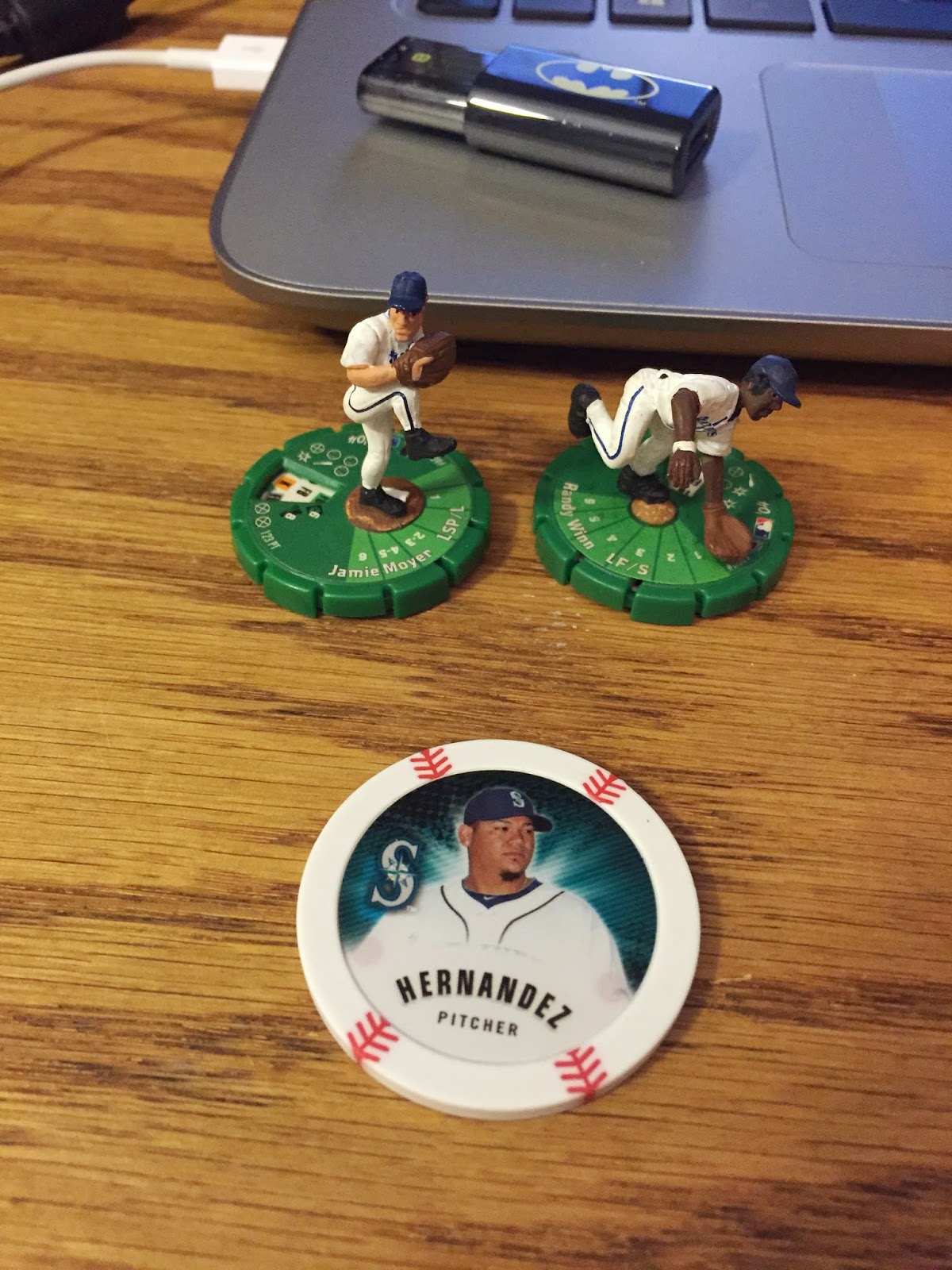 Finally came these Mariners mini-figs and a King Felix chip. The Chipz have really grown on me. I hope they come back with a few retired players this year.

Great break, Chris, and all the loot is much appreciated. Can't wait for the next one!
Posted by The Junior Junkie at 2:47 PM