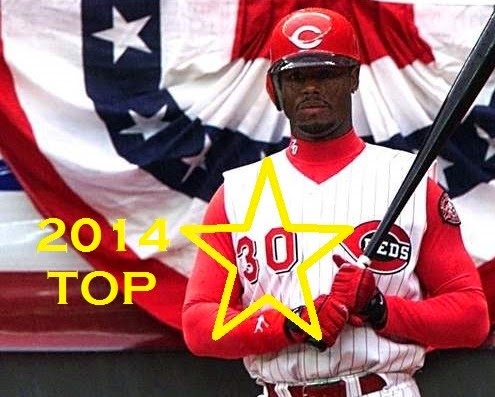 This is it, guys. This is where it gets real - real expensive. Of the 973 new Griffeys added last year, these are quite literally the 1%. The absolute best ones. They're the bee's knees, the cat's pajamas, and the dog's bollocks all rolled into one. Feel free to compare these to my Top 10 from 2013. I'll admit before we start that it's tough to top a '93 Finest refractor, but I think we did pretty darn well.


I have numerous bat relics for Junior, but this one is unique. The card claims it to be from one of his Minor League bats, and if that’s true a little piece of history it is, indeed. The design is excellent as is the fantastic Griffey-in-the-minors awesome swing shot. And check out the bright red #24 emblazoned on his jersey below blue lettering – if you squint he almost looks like a Dodger.

Another relic with few or no peers, this one holds dirt from the batter’s box tread upon in a real game by probably dozens of big-leaguers. Hopefully one of them was the guy on the card. This insert is such a strange premise, and I honestly don’t know how this has never been done again or since, to my knowledge, anyway. The design could use some tweaking, but I think that even non-collectors can appreciate the idea.

A lot of people don’t like manufactured relics and I get that, but this is a Topps Rookie Cup on a Topps card made by Topps that was pulled from a pack of Topps. Topps made the rookie cup famous in the first place, so their manufactured version is as original an artifact as you can get apart from those impossibly rare little metal cups from the 80’s and 90's. Apparently only eight of the latter were made via Junior’s 1990 Topps card. Lucky for me there were 99 of this one, and I landed #30, his Cincy uniform number. This Ebay 1/1 is better than that other not-all-that-authentic 1/1 from earlier in the countdown, no doubt.


There’s something off about this card. I don’t know if everyone notices it right away, but it sticks out like a sore thumb when I look at it. It’s that facial expression, guys. It’s the posture, the folded hands, the general malaise of this otherwise joyous and awesome moment. The microphone is a million miles away, the chair beside him is empty, and the guy to his left sporting khakis and short sleeves is doing something that involves looking in the other direction. There’s just a lot of upsetting stuff all going on at once, and yet Upper Deck saw fit to slap it on a tough-to-find short print that sells for way more than it should.

Despite all that, I still love the card. It’s positively dripping with truth and realism. It’s telling a small piece of a larger story from the annals of baseball history that everyone may have expected but couldn’t necessarily show evidence for. It says to the world, “Junior came to Seattle to retire here. He’s not producing like he used to, and everyone knows the end is near with little or no possibility of a World Series ring before it’s done. This truly is the beginning of the end.” And every bit of body language the Kid is giving us here screams that he knows all that. I could see this card upsetting some people, but it's also so personal and humanizing that it's stunningly beautiful. While it may be #7 in this countdown, this really is one of the greatest Griffeys of all time for reasons that reach far beyond the hobby and into the human soul.

This card is great in the way that so many cards from the 60’s through the 80’s are great: it’s simple, it’s colorful, and it’s beautifully imperfect. Check out the authentic baseball background - it’s like a little league photo. It pre-dates Junior's San Bernardino Spirit pre-rookie from the last countdown post, and yet this card appears far superior. You might think the production value of his cards would get better as he got closer to the majors. Definitely not so in this case. Yellow border for life!

This is the Daddy of manu-relics, my friends. The original Topps All-Star Rookie Trophy (which predates me and both my siblings, by the way) cast in metal, mounted into the thickest card in Christendom, and numbered to only 25 of which I got the very last one. The Rookie Cup is a lot more recognizable to me than the trophy being that I'm a child of the 80’s, but this trophy has history. It’s on my Rusty Staub and Ron Swoboda rookies as well as countless other vintage gems. And again, that trophy is a proprietary Topps thing which makes this just as authentic as any jersey/bat/patch/jock strap relic you may come across. I stand by that.

When I first got this card early in 2014, I considered it the front-runner for the #1 spot on this list. The fact that it got bumped to #5 says a lot about the next few acquisitions.

This guy here was the last major-brand rookie I needed, and I finally landed it when I bit the bullet and picked up a whole sealed set of 1989 Topps Traded Tiffany. While it isn't anything you haven't seen before, it was in the top spot on my want list for so bloody long. It also doesn't hurt that the card itself is glossy and gorgeous. The colors just explode off the surface.

The only way we were gonna top those last few cards was with some autographs. Here to not surprise anyone at all is that amazing Topps Gold Team Coin I got from card and Army veteran Jason, formerly of Joe Average Card Collector. The money I sent him for this lil' nugget got him tickets to a real MLB game where he got to sit with the Rockies team owner. In exchange I got this low-numbered autographed beauty with a big metal coin in it.  Who got the better end of the deal here depends on where your priorities lie. My priorities have me way ahead.

Were you aware that Griffey's dad also played professional baseball?!? How cool is that? It's a no-brainer for card companies to take advantage of that fact with one of these great dual-signature numbers, and it's even more of a no-brainer that I should have one in the collection. I am, after all, a "Junior" myself.

There are a few different Jr/Sr dual sigs available, but I decided to go with one that shows them both as Reds. Eventually I would like to get my hands on a dual-Mariner version (which I have not yet been able to find and, therefore, may not even exist), or at the very least one showing each Griffey on his respective heritage team. In the meantime this refract-tastic beauty will sit, slab un-cracked, in a place of honor in my safe deposit box with all my other indispensables of Griffeydom.

This is the end, folks: my best Griffey acquisition of 2014. If you keep up with the blog, you can probably guess what it is. If not, feast your eyes:

It's indescribably beautiful. They should have sent...a poet.

The print quality of this baby is astounding - you can see every brush-stroke that went into that painting. And the painting itself is just perfect. My favorite part is the left-to-right background fade from Yankee blue to Mariner green. The Kid's signature is right on-point, too. While there are 1000 of these babies floating around, it's so legendary a card that it continues to this day to carry a monster price tag.

No, it's not the dual-signature version, but 2015 is another year. As long as my wife never reads these posts (which is a safe bet), I don't see why I couldn't set enough aside to land the big boy before the year is out. Don't bet on it, but it's not outside the realm of possibility. I mean, I've gotten this far, right?

Thanks for hanging in there with me. It was a great year on the baseball card front with a ton of amazing bloggers new and old, and trades, and through-the-mail friendships. I really am grateful. Let's keep doing it, m'kay?

Posted by The Junior Junkie at 2:36 PM