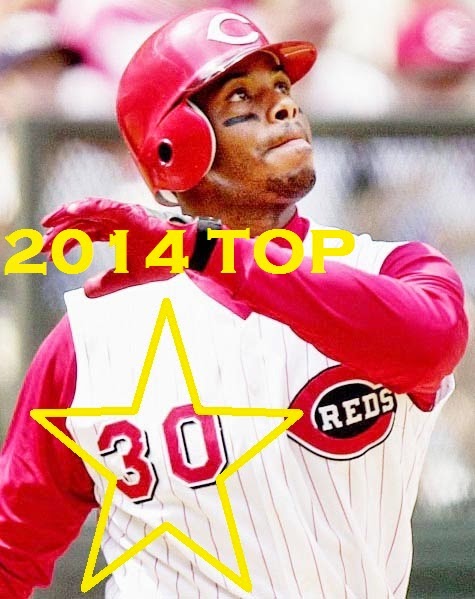 Welcome back. I'm ranking the Top 30 of the 973 Griffeys I added in 2014, and this is the middle ten. These are the ones that, while excellent cards all, just missed out on being in Top 10. It was tough ruling some of these out of the top of the list, but it was such an amazing year for new Griffeys that I feel like I can stand by my picks.


One of the most bizarre relic cards I’ve ever come across for any player, this set of cards from Just Minors gives you a relic without telling you whose relic you’ve got. That’s the craziest damn thing I’ve ever heard of from the realm of relics, but it’s also kind of fun. Without photos or nameplates of any kind the card itself is a little boring, but the trivia printed on the card back make it incredibly easy to guess the player. This card will be getting its own post sometime very soon. It’s too weird not to.


Sure it’s just a silly insert, but I was ecstatic to finally land this puppy. It was the last card I needed to complete Griffey’s part of the insert checklist, and it took forever to track down for some reason. All six cards spelling out JUNIOR look excellent in the binder together, and I even ended up with an extra R. This one in particular is especially great because of the excellent photo and for the fact that it could very well stand alone without the other letters, a quality you just won’t get from the N or the U or, you know, the other three letters in Junior.


An oddball of international proportions, this is from Fax Pax, a set of cards made in the United Kingdom that feature players from just about every sport imaginable including football, basketball, golf, tennis, boxing, rugby, and cricket. I’m willing to bet these were fetching high prices stateside before the card bubble popped. I'm suddenly craving a crumpet. I don't even know what that is...


I pulled the Frank Thomas from this insert out of a pack when the set first came out, and right away I loved it so much that I’ve been chasing the Griffey ever since. It happens occasionally that I get a wild hair to just pull the trigger already on a long-sought 90’s insert, and this year that happened with this Peter Max. Thick and beautifully-printed with lots of color and character, this card really is a thing of beauty and a major reason why I miss Topps Gallery so much.


This is one of the first of these I’ve ever owned for any player, and by “these” I mean multi-relic cards that spell out stuff. Unfortunately there’s only one color cloth here (I’m thinking this is a lot of pants), but the card itself is attractive enough and numbered out of only 50. Plus it heralds Junior’s #3 which he only wore for a short period towards the end of his career in Cincinnati as a tribute to his three kids. There’s a lot to like about this one. Plus it has a hashtag which I believe were called "pound signs" when this was printed. #aheadofitstime #whenwillthisfadend?


This ‘90’s insert used to go for 80 bucks, and despite card values dropping like dead flies this one seems to have held its value better than most comparable inserts due to its extreme die-cutting and popularity when it first debuted 20 years ago. Nowadays they tend to sell in the 15-20 dollar range, but when this one popped up on COMC for a drastically discounted price, I had to bite. Another I’ve been after since adolescence.


This seat relic insert from Upper Deck came out following the 2002 demolition of Riverfront Stadium, also known as Cinergy Park. Formerly the home of both the NFL Cincinnati Bengals and the MLB Cincinnati Reds, Junior did not have quite as many memories of this building as did his Dad who helped rock Riverfront as part of the Big Red Machine. A Griffey, Sr. card would be more appropriate holding this relic, but it’s still a very cool and unique card.


What the hell is this thing? Sega? Like, the video game company? Why are there seven stars plus one empty one? Maybe there’s an explanation on the back….GOOD LORD. It’s all in Japanese. What am I holding? Why does it have rounded corners? Is it a game? Did Griffey play in Japan at some point and I never heard about it? Someone explain it to me!

As many of you know, this card came to me from Zippy Zappy, the blogsphere’s #1 source of Card-Gen. He saw it fit to equip me with my first and only Card-Gen card. Having never seen a checklist for these or even any for sale anywhere ever, I have no idea whether there are more Griffeys available or if this is the only one. It’s a looker, too, as far as baseball gaming cards go. A very exciting piece of trade fodder.


Here is the photo variant for one of Junior’s most popular pre-rookies. It's significantly rarer, but I'm glad it exists because the other version has a super-blurry photo. This one is crisp and exudes the kind of charm that only an amateur photographer can bring to the table. The heavy-handed cropping is about the only thing that kept it out of the top 10. I wanna see what's beneath those palm trees!


It is providence that this pack is still sealed with the Griffey in it. Really, it should be loose with the rest of my #33’s, but a moment of inspiration spared it at the last moment. Wanna hear about it?

A few months ago I had grabbed a couple dozen 25-cent packs from a bin at the monthly card show, most of it ’89 Donruss. I began busting them in search of a fresh Griffey, and having already busted two it suddenly hit me that I should start checking them before opening to see if the Griffey was visible through the paper on the back of the pack. Literally the very next pack I grabbed was the one you’re looking at. Had I decided to start checking them three seconds later, this card would be sitting in a 9-pocket page with dozens of other identical #33’s. Instead it resides in a super-thick top loader in the Griffey box. It was meant to be.

Up next: my Top Ten Griffey Acquisitions of 2014. Prepare ye.
Posted by The Junior Junkie at 10:00 AM