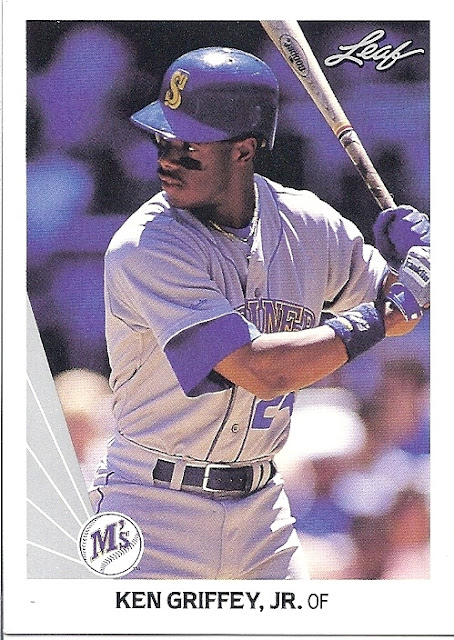 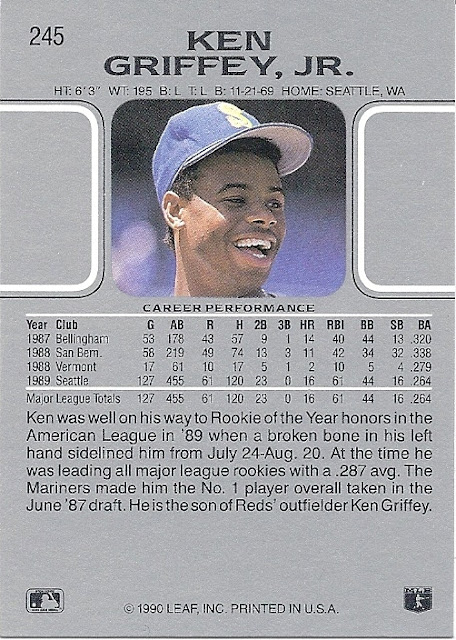 Is this a good Griffey card? Yes.  The first premium Leaf set and an iconic set in general.  Plus, look at that happy guy on the back.  C'mon.  That's charisma, right?

The set: 1990 Leaf was Donruss' leap into the world of premium cards.  Leaf would be one of the most respected and beautifully-designed sets for years to come.  Even the Donruss base set started looking better.....well, not in 1990, but eventually.

I bought a big mystery box at my LCS a few weeks ago and it had almost the entire set of 1990 Leaf inside.  I cherry-picked a few to show here: 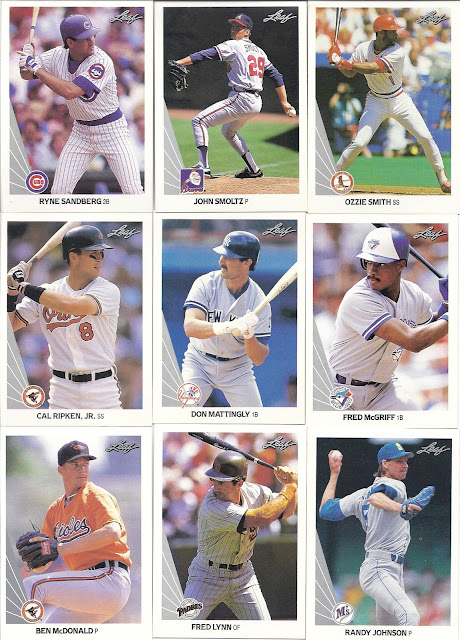 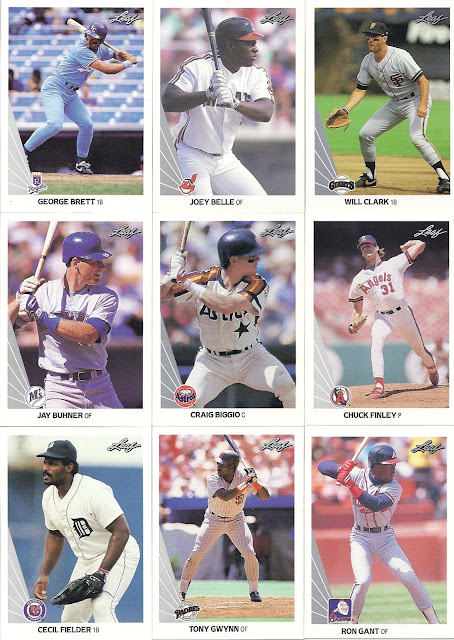 As you can see, the photography is pretty run-of-the-mill.  Basic action shot, bats on shoulders, pitchers early in their windups.  The overall design is not as timeless as some other sets from this era, and certainly nothing to write home to Mama about these days.  But in 1990, this was the bee's knees.

It's like when you see an original ad for a 1971 Ford Country Squire in your Dad's old Playboys and you think "This was cutting edge?"  Robocop is filled with that feeling - plenty of 1993 Tauruses in mat black.  Blech.

One thing Leaf did very right is the checklists:﻿
﻿ 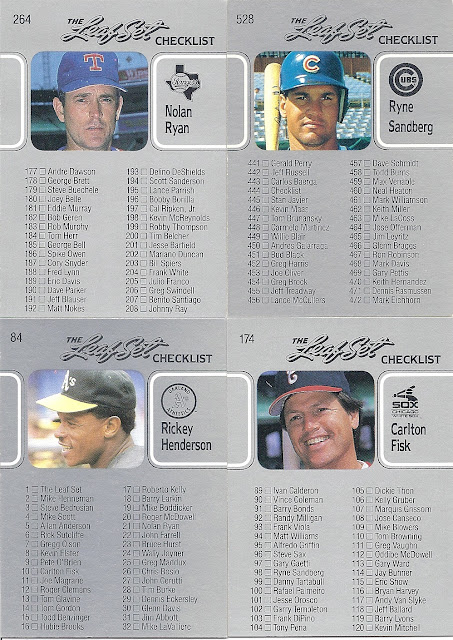 ﻿ ﻿
Excellent checklists for so early in the game.  Suddenly it wasn't so bad to pull one from a pack.  An excellent move that would lead to drastic changes in the core identity of the baseball card checklist. 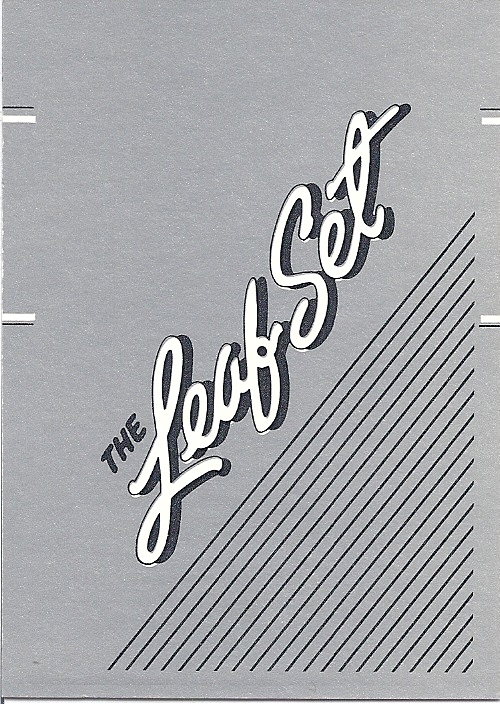 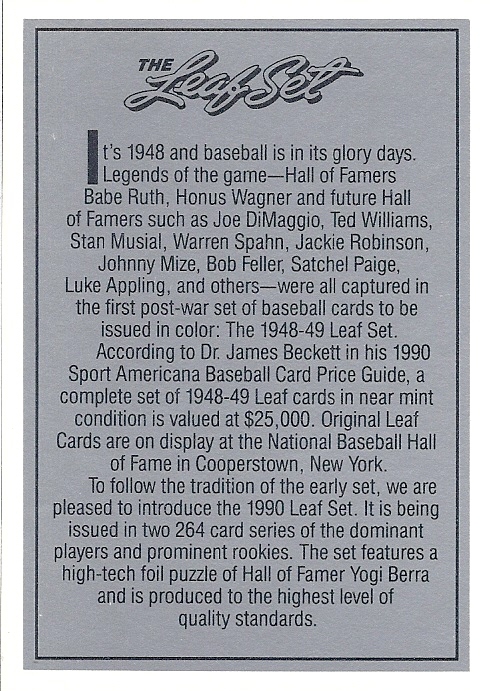 This is the only set I know of that has a cover card for #1.  Hoity-toity to say the least....

I'll admit that it's a nice set, but I always considered it a bit overvalued.  The photography is OK.  The back is pretty cool.  The front design is just alright.  I suppose they were pretty nice for 1990, and certainly a lot better-quality than most of what else came out that year, but overall I was never totally blown away.

Note that this is not the first Leaf set - it is the first year Leaf was made to be a modern premium set capable of competing with Upper Deck (it took Topps another year to put together Stadium Club - worth the wait).  Three years later, Leaf would come out with high-gloss and gold foil on every card.  Four years later, an even more premium set called Leaf Limited would arrive.  Five years later, Leaf would make one of my own favorite base sets of all time.

Sadly, Leaf was discontinued in 1998, returned in 2001, and disappeared again in 2005.  Panini America acquired Donruss, and Leaf Limited has recently been rebooted.  Maybe if Panini can get their MLB licensing straight, there is hope yet for a new Leaf set. 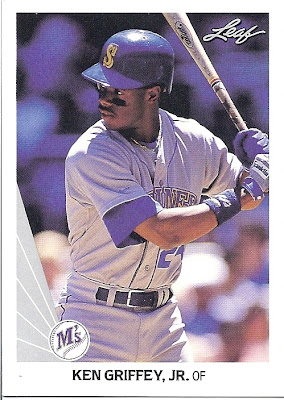 Griffey looks focused as he stares down the pitcher and looks for weakness like a lion on the prairie.  The pitcher in his windup, a wounded wildebeest in the desperate throes of near-death.  The catcher, a zebra watching in terror from the riverbank.  The on-deck batter is a hyena, pounced to feed on the spoils of Griffey's affront.  The crowd are meerkats.  Lots of cute, little meerkats.

There was a 12-card preview set that included a Griffey.  I don't have it yet, but I don't believe it is all that different from the regular card.

And yet I still want it.  That, and the Frank Thomas RC from this set just because it was such an unattainable card when I was a kid, and Frank is awesome.

Posted by The Junior Junkie at 5:08 PM