When Griffey Ran for President 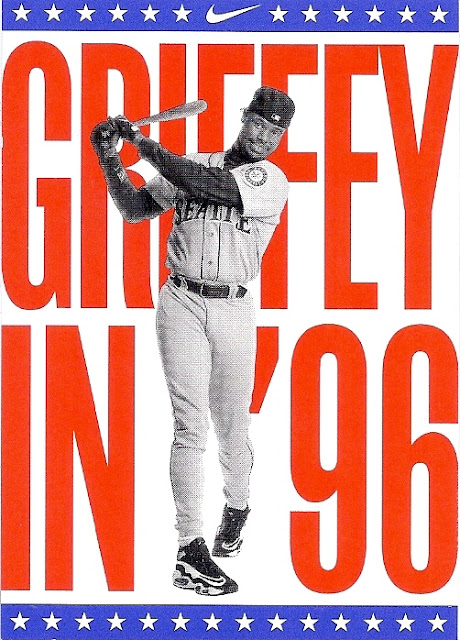 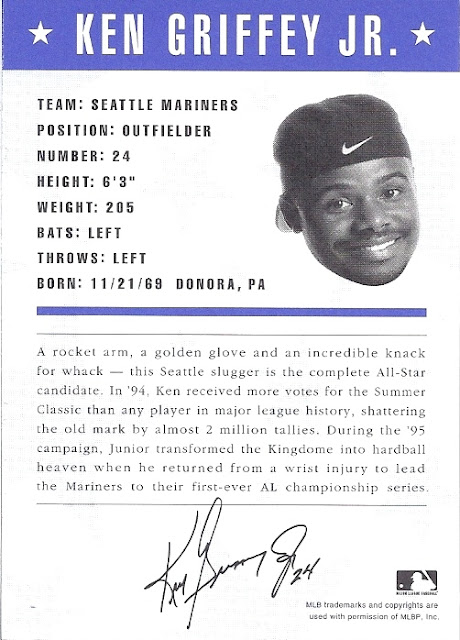 In my collection: 1
﻿﻿
Griffey looks: electable
﻿ ﻿
Is this a good Griffey card? Yes.  Griffey's only Nike card, and my favorite ad campaign for a shoe company since Dan vs. Dave.
﻿ ﻿
This card was created by Nike to advertise Griffey's supposed candidacy for president in '96.

﻿﻿﻿﻿﻿ ﻿﻿﻿﻿﻿ You may remember the 1996 race was principally dominated by Bill Cinton and Bob Dole.  In the end Clinton took it for the blue states.  At the time Griffey was 25 years old, making him 10 years too young to be election-eligible.

Although he did have a "knack for whack."  Ahem.

This campaign happened at the peak of Griffeymania and optimism.  Junior was healthy again and the Mariners had finally tasted success.  Griffey was looking more and more electable for the Hall of Fame.  The iron was hot, and Nike struck.

﻿I don't know if this card can be considered an oddball since we know its pedigree pretty well (the Nike swoosh gives it away).  I guess it should be classified as a branded oddball, that being a card made by a company who's primary business is not sports cards and that features their name or logo prominently.

This is also one of the greatest branded oddball cards I own.﻿﻿
﻿﻿


﻿﻿﻿1996 also happened to be the year the Sinbad vehicle First Kid came out.  Disney spared no expense in the casting of this opus which featured not only Sinbad himself but the guy who played the titular character in Benson and the insufferable older brother from Home Improvement.

The kid character was played by Brock Pierce who was also young Gordon Bombay in the first two Mighty Ducks films.  He was also in Little Big League with a little-known actor named Ken Griffey freakin' Jr.

Forgive me, but I don't think you can have a serious discussion about anything that happened in 1996 without bringing up Sinbad.

﻿﻿﻿﻿
﻿﻿For a fun, satirical report on the Griffey campaign and if you are interested in hearing Lou Piniella describe Jay Buhner's snot rockets in extreme detail, this is a good read.  Plus it contained this map:

Posted by The Junior Junkie at 2:04 PM