I received a pair of trade packages in the mail this past week from a couple of baseball card blogging all-stars.  Take a gander:

This first one came from Jim over at gcrl.   He's crazy about the Dodgers and double-play cards (of which I have another stack saved up), and he seems to know what I like.


Thanks, Jim!  I've got a healthy stack of double-play cards I'm mailing to you Saturday.


If you read Nachos Grande you may have seen his series of Topps Heritage American Heroes.  It's a very cool set I'd like to pick up someday.  You may also know that Chris puts up growing trade stacks you can claim if you have cards to trade him.  Well, I'm sitting on a trove of Barry Larkins, and he posted this guy: 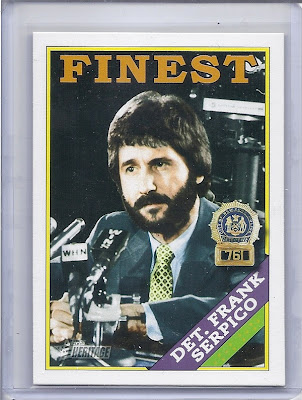 It was my buddy Jason's birthday Tuesday.  He and I pride ourselves on the wacky presents we get for each other (for Christmas I got him an autographed photo of Michael Dukakis).  Jason is positively obsessed with Serpico.  The man, the story, the Pacino movie - all that.  When Mr. Grande posted this card, I pounced.  I also nabbed a few others from the same stack including a Roger Clemens and a Vince Coleman among others, but the star of the show was Detective Frank Serpico.

I was then inspired to hop on eBay and pick up this relic for pretty cheap: 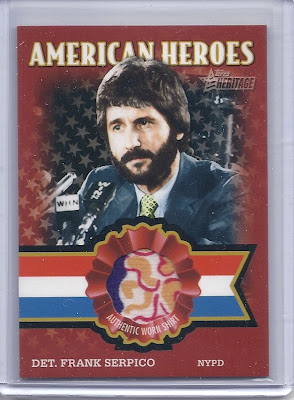 It's gonna be fun to give these to Jason!  I appreciate the help, Chris.

Oh, Chris has stickers, too.  How cool is that?

Thanks again, Chris!  We should do a proper trade involving lots of cards.  I have stacks of Reds an no intention of hanging on to them.  I need to do a better job of shedding cardboard weight.  I think I'll work on a mass trade strategy today.

Happy hump day, everybody!
Posted by The Junior Junkie at 10:48 AM