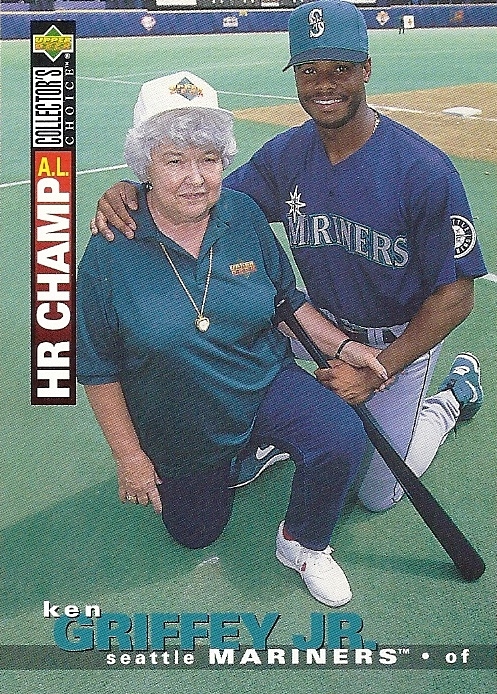 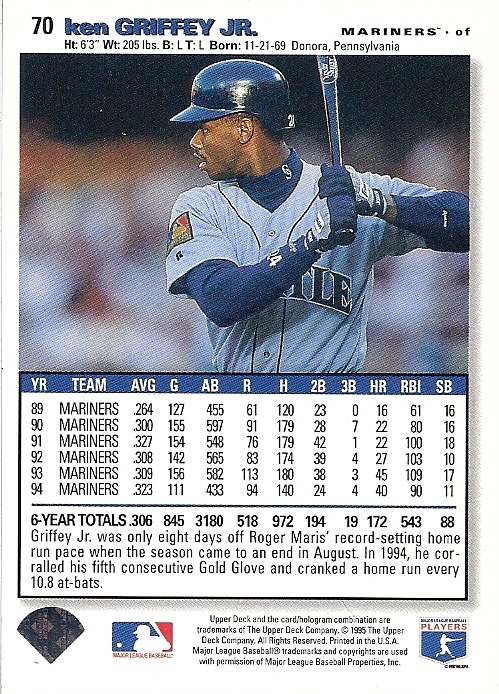 Is this a good Griffey card? Yes.  Everybody loves Collector's Choice.

The set: Collector's Choice was created by Upper Deck to enter into a more affordable market.  While the cards didn't contain all the crazy foil and light-refracting ballyhoo of their higher-end sets, the producton value was high and the photography and design appealing.  For that reason Collector's Choice lives up to its name to this day - a favorite among collectors.

As a kid with little money I bought plenty of Collector's Choice packs back in the day.  They were only 99 cents and offered a lot of bang for that buck.  I probably amassed more CC cards than any other set in my time of hardcore pack-ripping.

So, as a way to relive those glory days, I bought this last week: 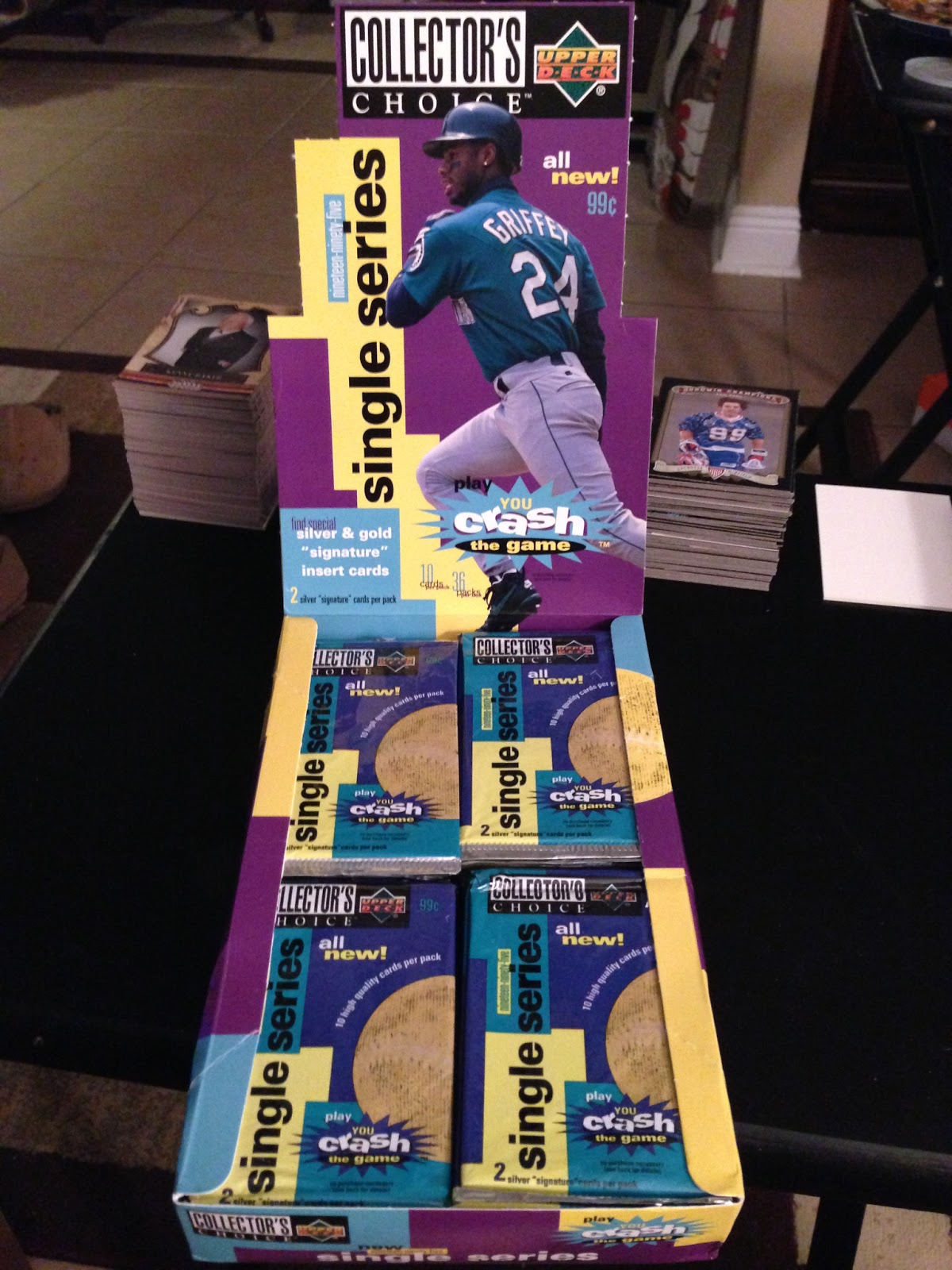 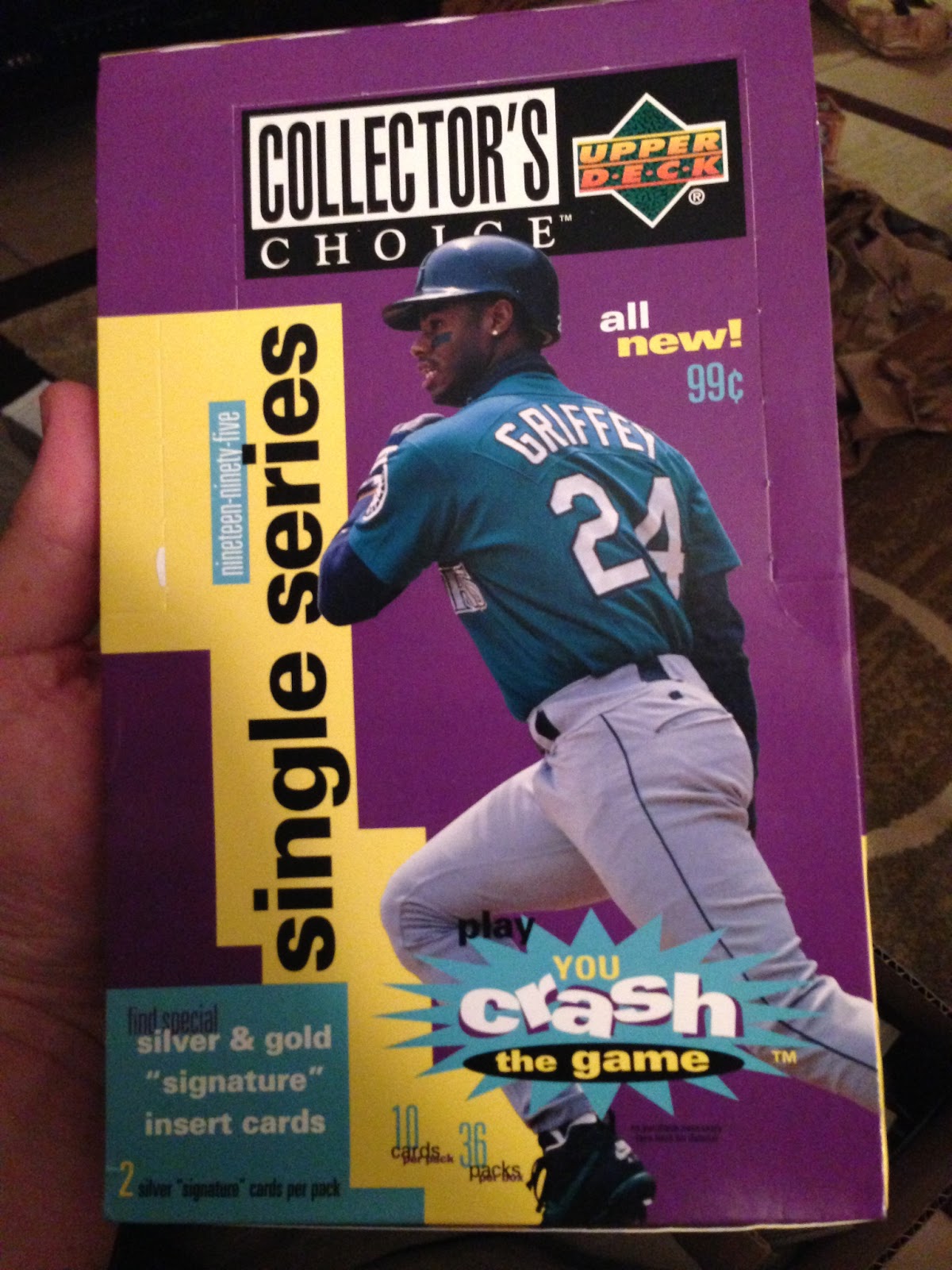 All I wanted was any Griffey gold signature.  The Michael Jordan would also be cool as would be the A-rod rookie.  The Ripken from this set is neat, too.  Let's see some base cards: 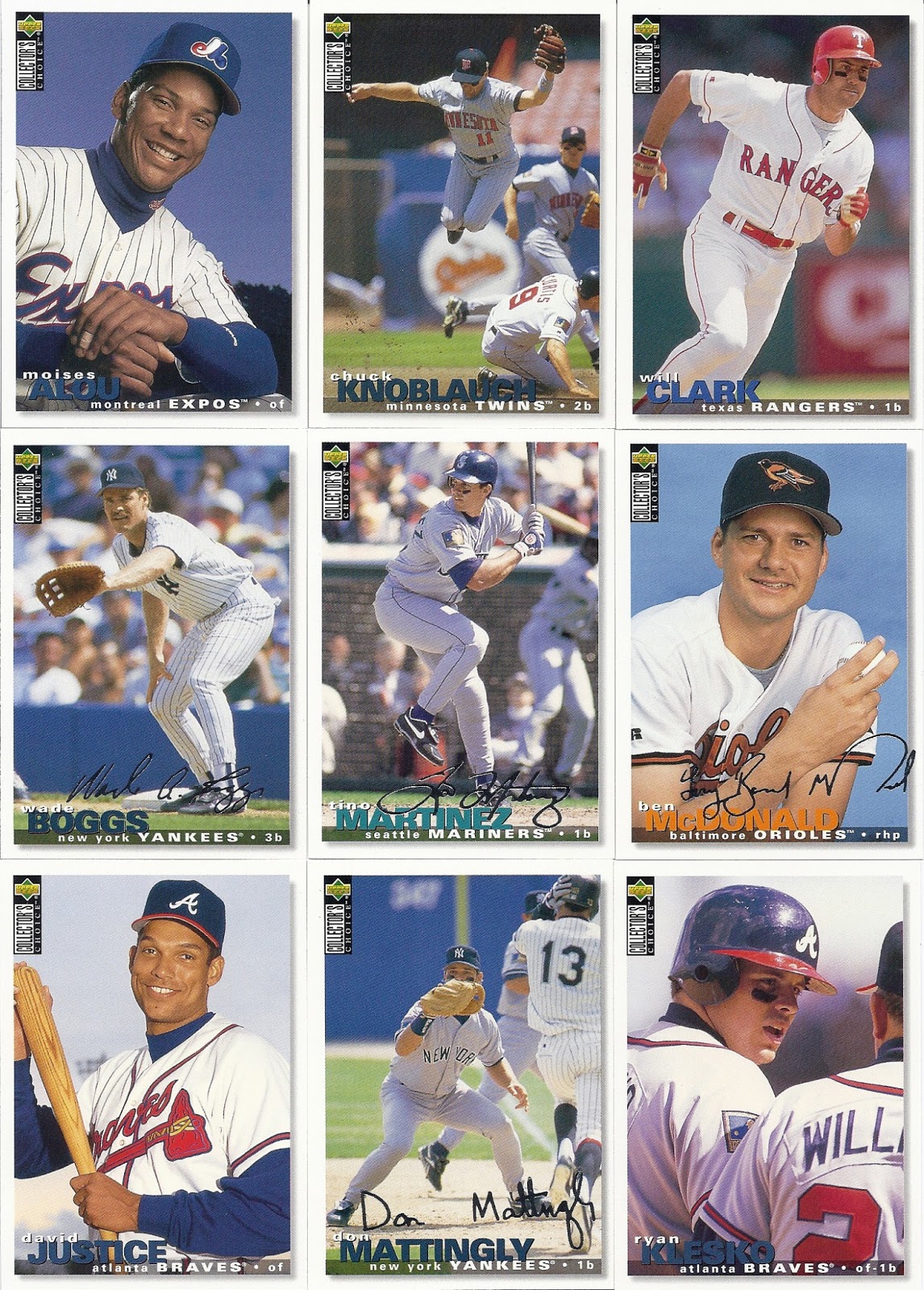 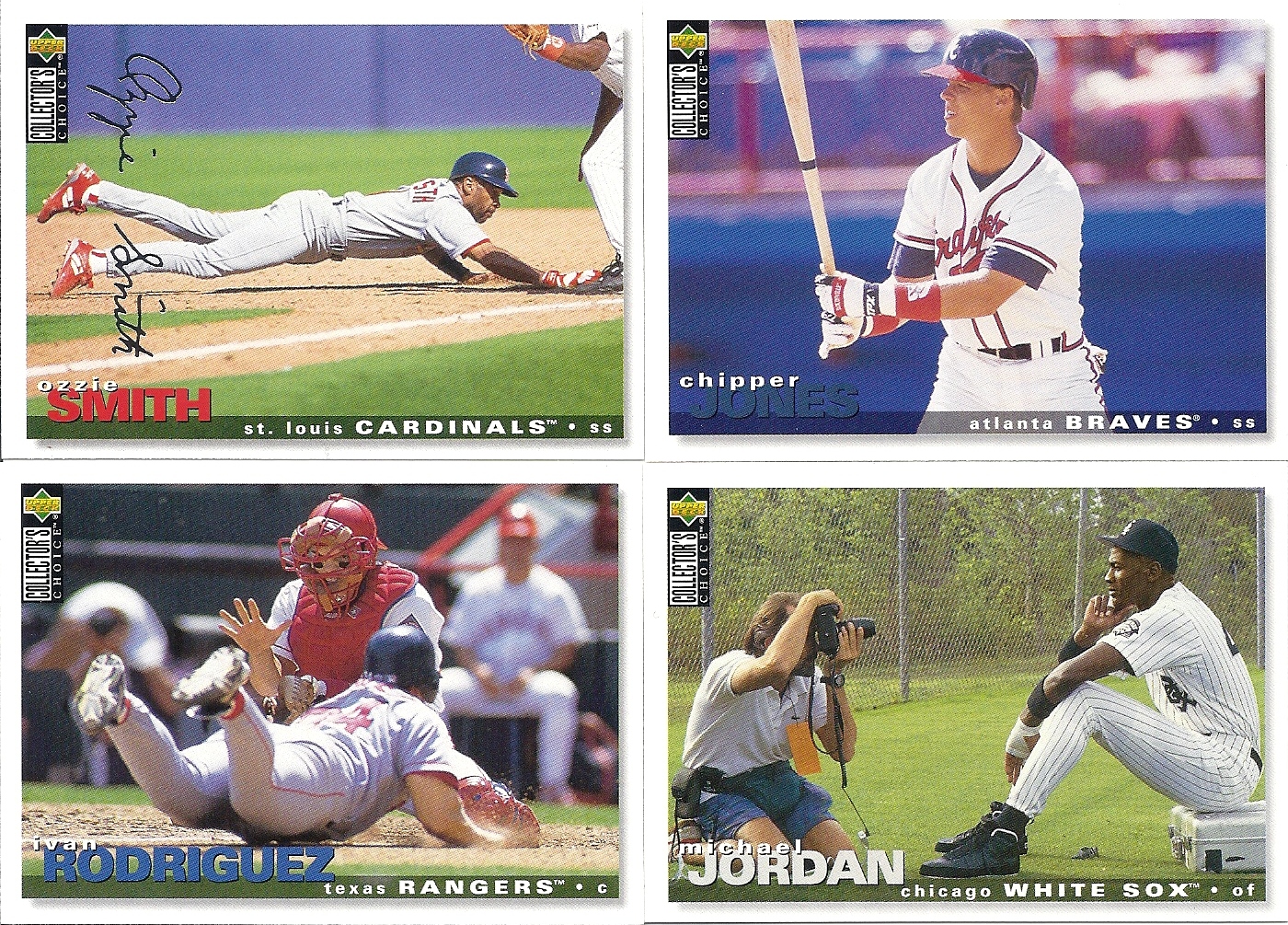 There are two parallels of the base set: Silver Signature (2:1 packs) and Gold Signature (1:35 packs).  This is one of my favorite iterations of the parallel (or, as we used to call them when value was all that mattered, "multipliers") in baseball card history.  Simple, but elegant.  I'm a big fan.

Unfortunately the signature always went on the short side, even on the horizontal cards.  It's my only complaint with the whole set.

All the parallels you see above are silver signature.  This box produced one gold signature: Geronimo "Not Griffey" Berroa.  I didn't scan his card out of spite.  Moving on.... 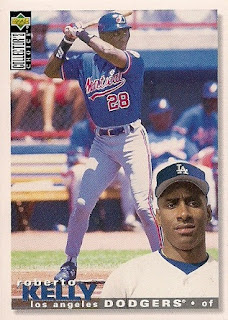 I recently sent this one off to Night Owl - it is arguably the most bizarre card from 1995 Collector's Choice.  It depicts a last-minute inset of R. Kelly in a Dodgers cap.  Can't blame them for wanting to keep current with the whole "single series" idea of this set, but this is the only card that contains such an inset.

The biggest stars of the day got the full-bleed treatment: 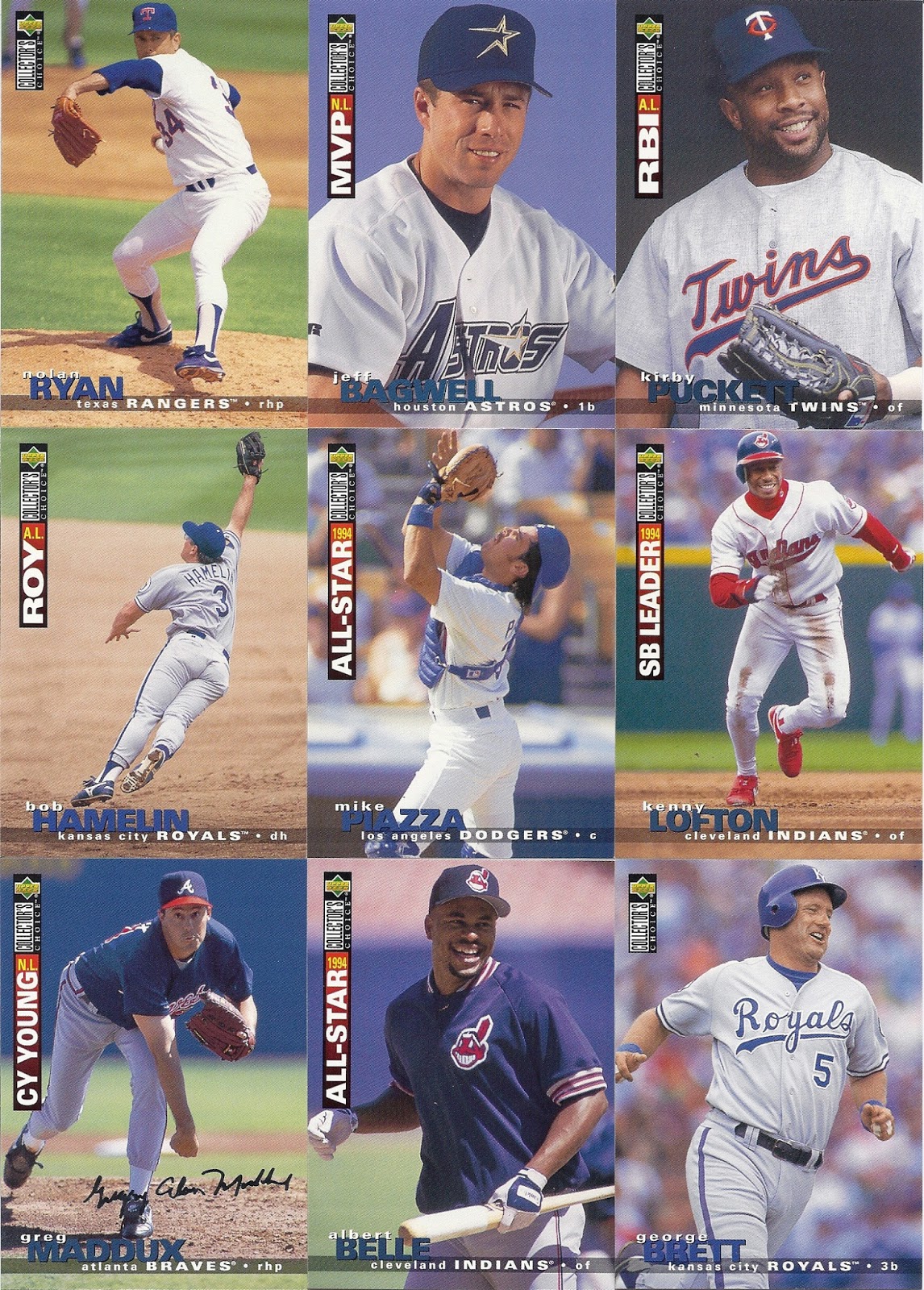 Makes me wonder why they didn't make the whole set like this.  They look great.  Moreover, check out the backs of these long-time stars:

Don't you love big, beautiful stat boxes?  These cards were icons the day they came out.  They are bringing sexy back.

Here is an ingenious ploy to keep the set in a single series while staying up-to-date.  There were five of these mail-in cards that, sadly, are a few years past being usable.  The only redeeming quality?  You guessed it: Marquis Grissom wearing what could be argued is a smile.  Calm down, ladies. 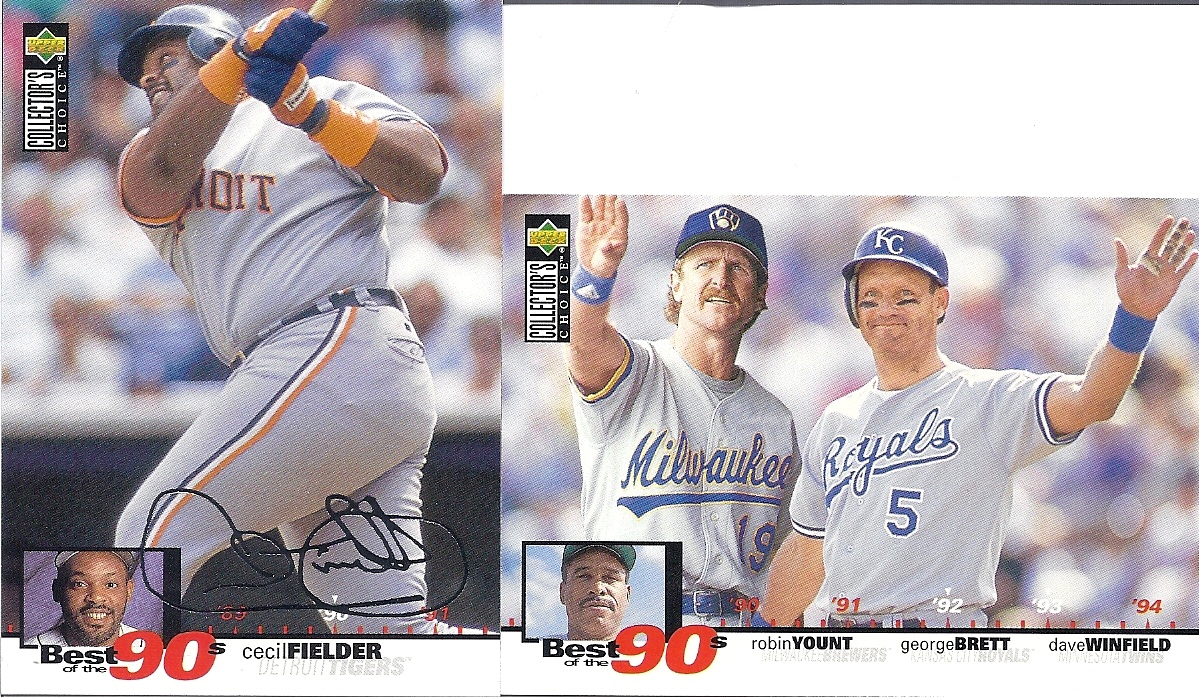 This is the Best of the 90's subset.  There is no perfect binder spot for that one on the right - just file it after Todd Zeile and get on with your life.

You've seen the What's the Call subset on this blog before - these are probably my favorite animation cards ever made.  It's the second year Collector's Choice featured Stumpy the Ump who time travelled here from the 50's.  The backs give a wacky situation and you have to guess the correct umpire ruling, which is hard even for some umpires.  It really is one of the most fun subsets I've ever pulled from a pack.  An interesting read and wacky caricatures of your favorite players. 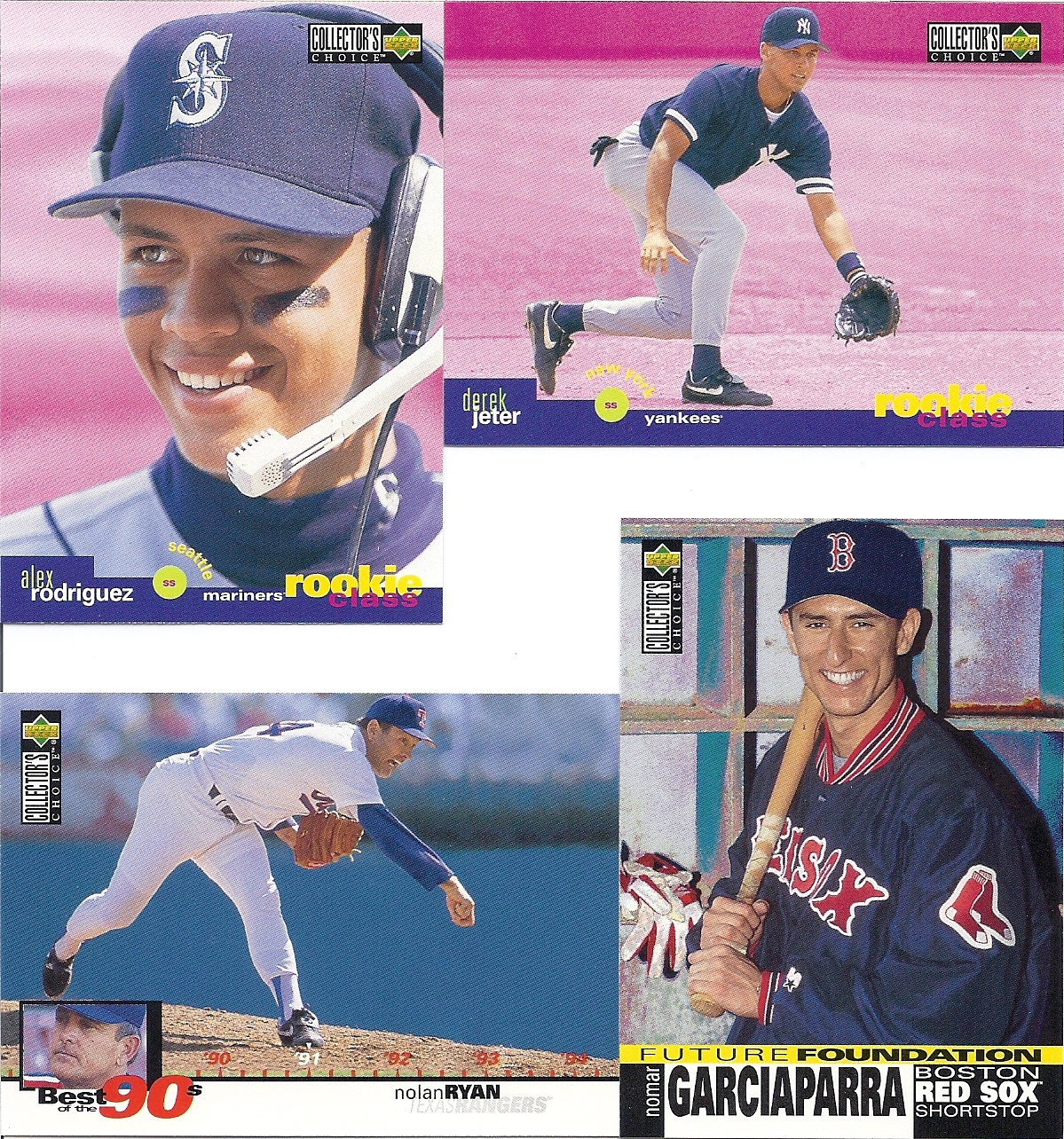 Check out these killer rookies: A-rod and Jeter both in the same rookie subset.  Very fun to pull from the same pile of packs.  Nomar is the only big name in the Future Foundations subset, and Nolan is the best of three other decades not mentioned here. 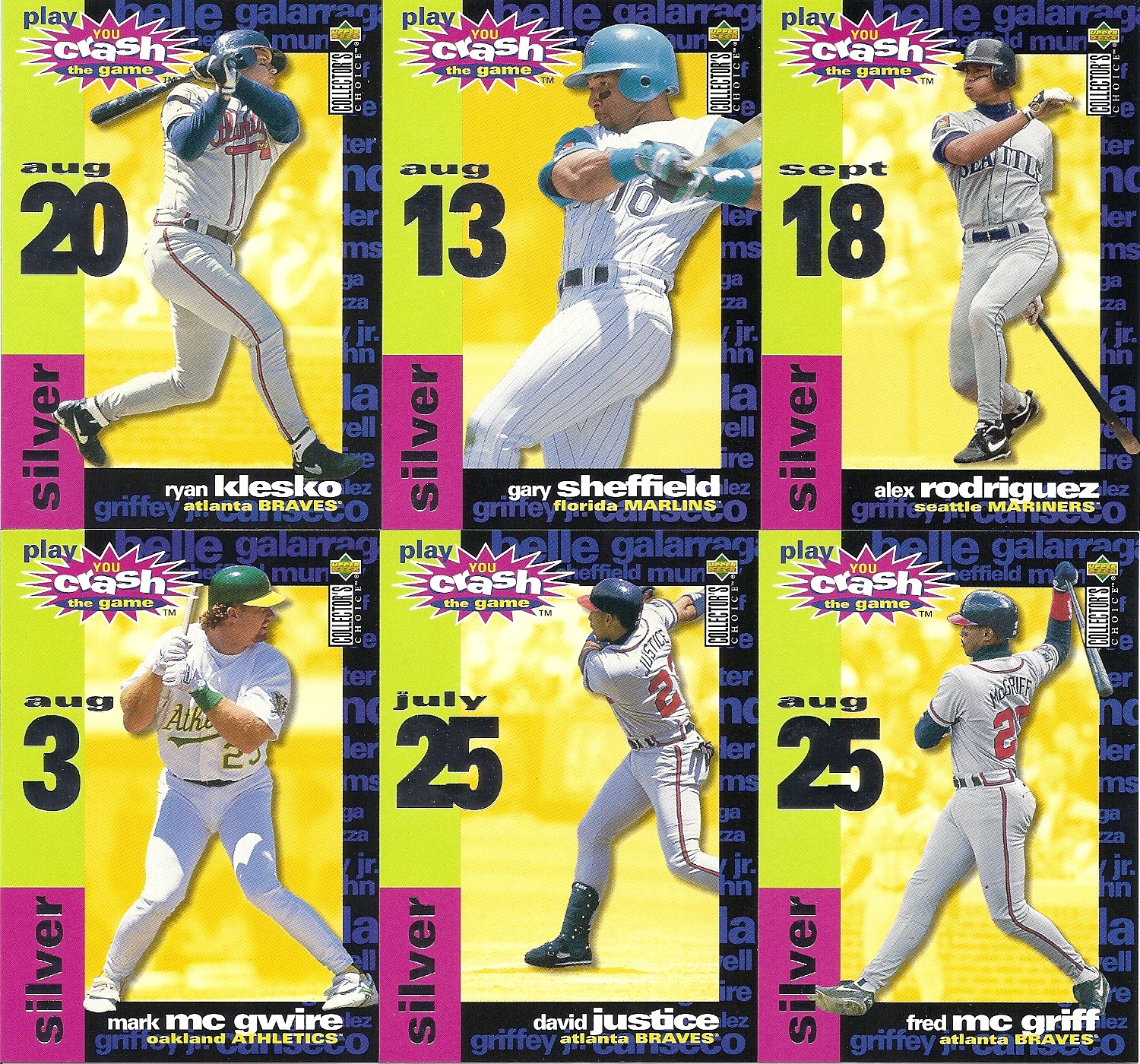 Ah, You Crash the Game.  I would find a way to take four paragraphs explaining how this insert works.  Since brevity is the soul of wit, let's see what Baseballcardpedia says:

The 60-card interactive set features three cards of 20 players, each with a different date on it. If the player hit a home run on that date, the collector could redeem the card for an enhanced set of all 20 players. The expiration date for redeeming these cards was February 1, 1996.  All cards were also available in a rarer Gold parallel.

That was beautifully succinct.  Upper Deck's flagship set had something similar called "Predictor" that was the same idea but with more than just home runs.

Hey, look at this guy:

Let's get this out of the way early: I don't know who that lady is, nor how she got into this photo and then that photo got onto the base card.  I was hoping the blurb on the back would clue us in, but no luck.

I like to think that woman is the Upper Deck representative and Griffey was playing around and invited her into the picture because she goes around taking so many other peoples' pictures.  Or perhaps she's the same rep that's been taking all his Upper Deck photos since the famous '89 rookie and they now have a work-based friendship he wanted to commemorate.  I really have no idea, but Griffey is friendly like that.

Here's a list of all possible reasons this photo exists:

- She is an Upper Deck rep, and they are friends - This is not unreasonable, but there's no way she wears that hat on the reg.  Plus she looks retired.
- She won a contest - This is extremely plausible when you consider all the Upper Deck logos they put on her.  This is the best one so far.
- She has a serious ailment - They would never make the poor old woman kneel if she was ill enough to get to be on a Griffey card.
- She is Jay Buhner's mom - On second thought, this is the best one so far.  Still, I'm going with "She won a contest."

So, those are my best guesses.  If you know, give us a shout-out.

Here is the silver signature: 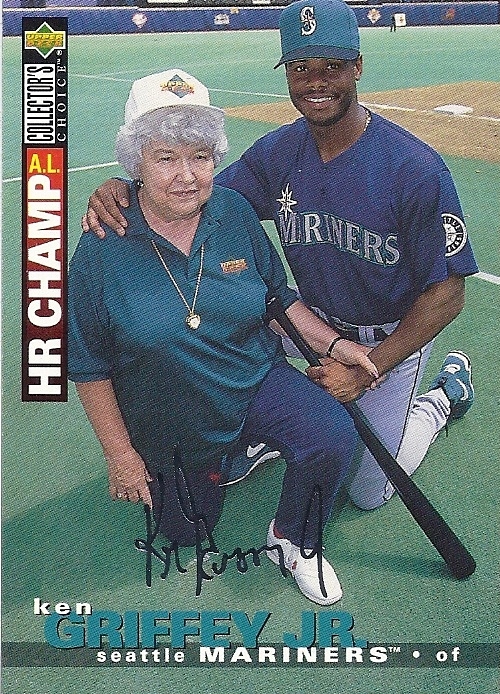 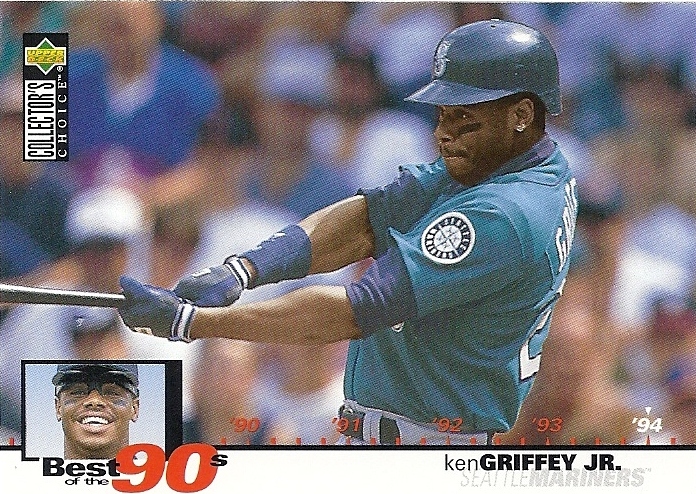 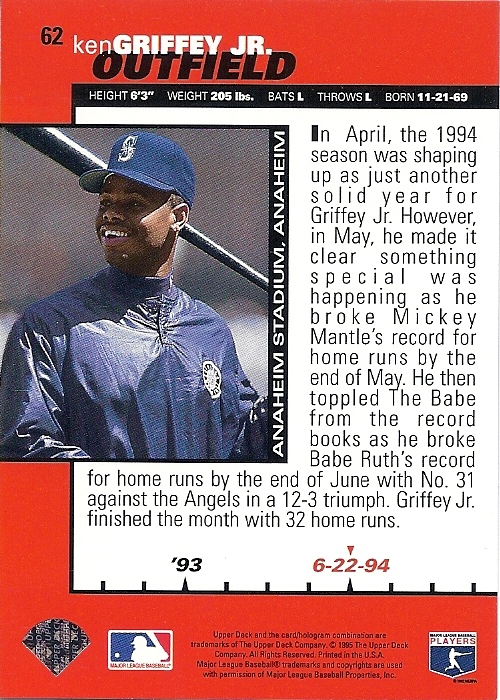 This is back when people were so proud of the fact that they were living in the 90's.  Everybody was like, "Aw, dude.  Welcome to the nineties, man."  Then they would turn up their Ace of Base CD's way too loud and play Sonic on Sega Genesis before cruising to Blockbuster Music in their Geo Prisms.  Those were tough times.

Anyway, Griffey was among the best of.....that. 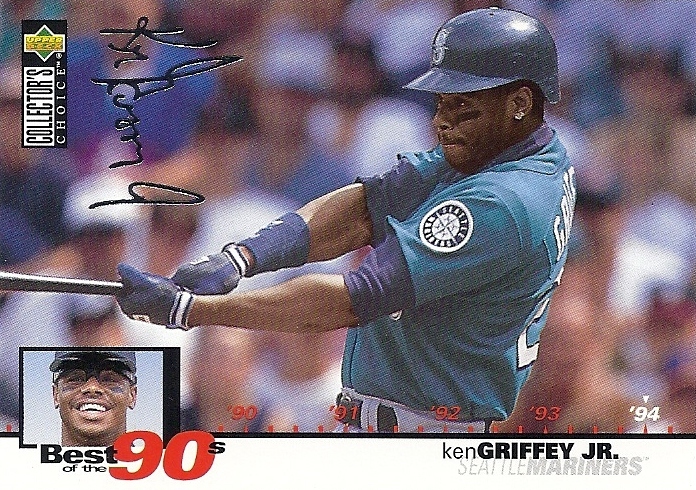 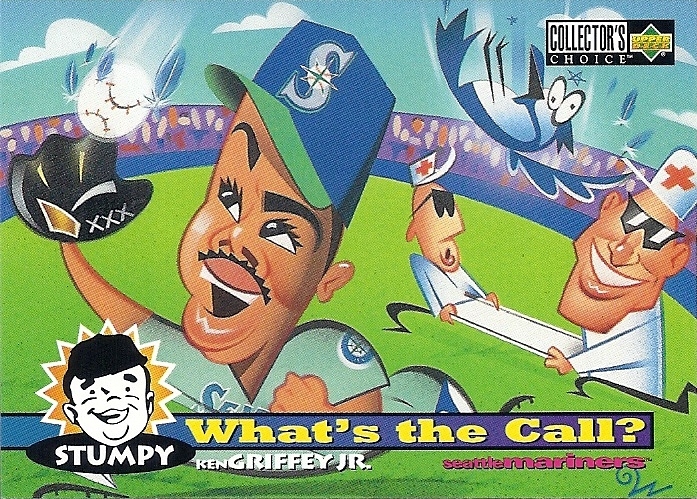 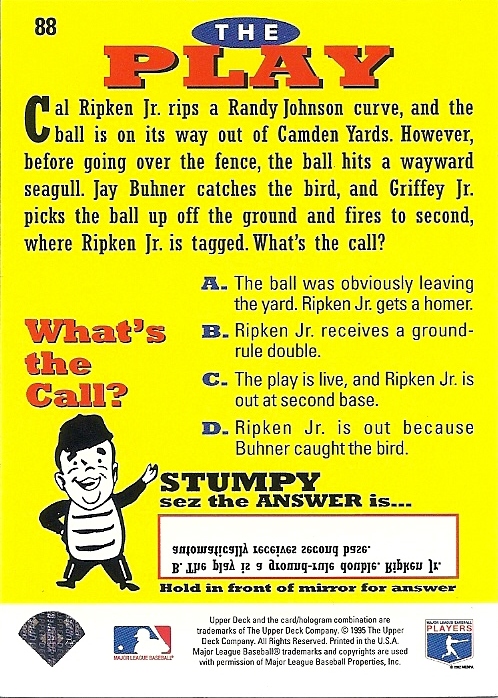 I always liked that Buhner is helping to catch the bird on a stretcher so the reader knows the bird is going to be alright.

Buhner looks the exact same in both the 1994 and 1995 WTC cards, but they made Griffey look completely different: 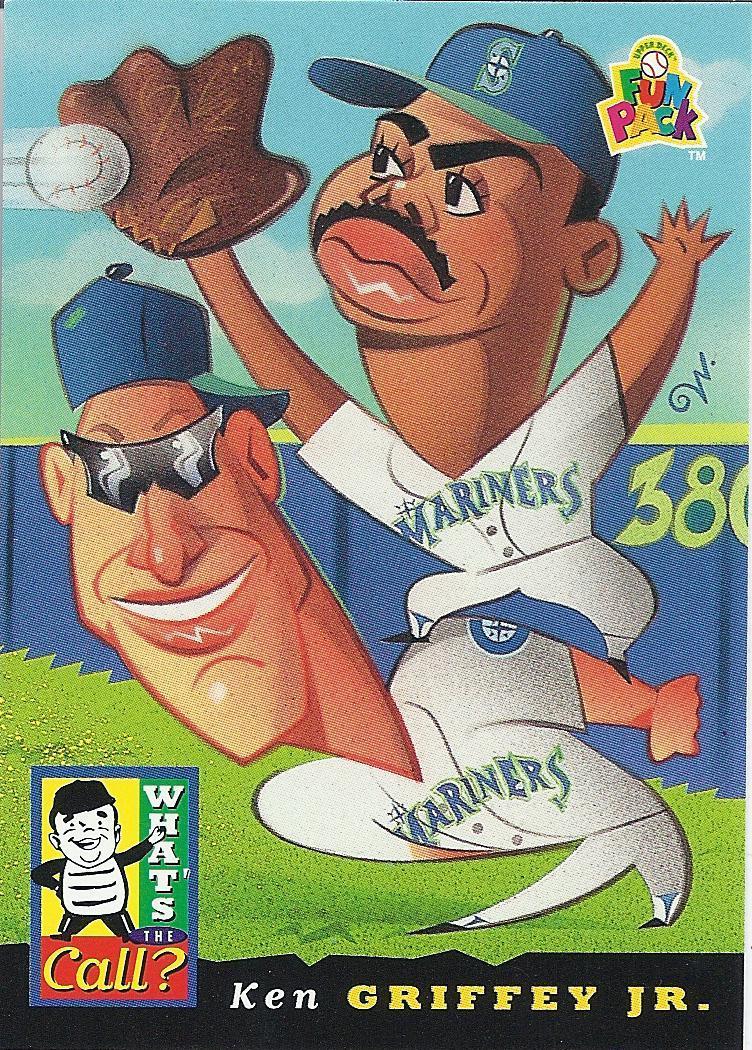 That's the 1994 version on the left.  I think he looks more like Robin Harris, the Dad in Bebe's Kids. 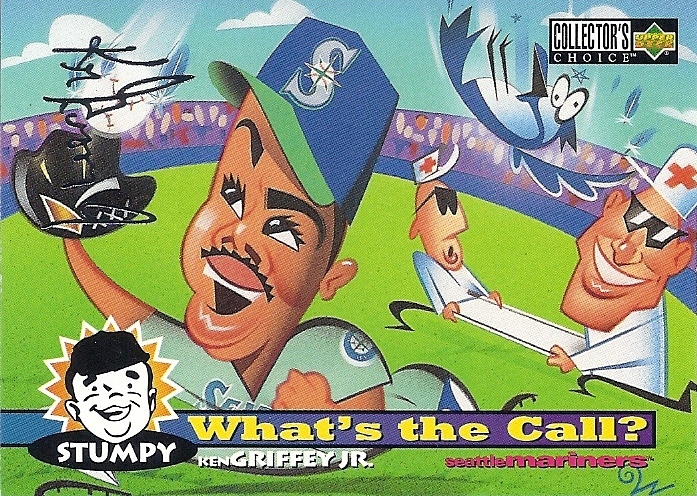 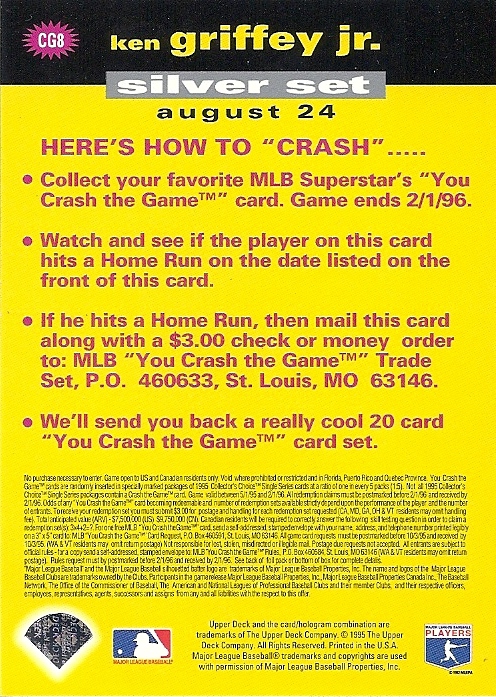 Griffey hit a home run on August 24th, 1995, making this card a winner.  Sadly I probably pulled this from a pack long after that.  Had I pulled it in a timely manner and mailed it to the address of note, I would have received a whole set of cards that looked like this: 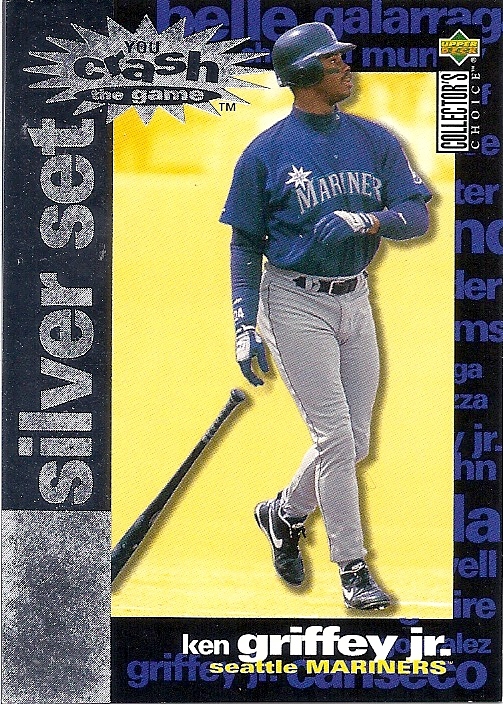 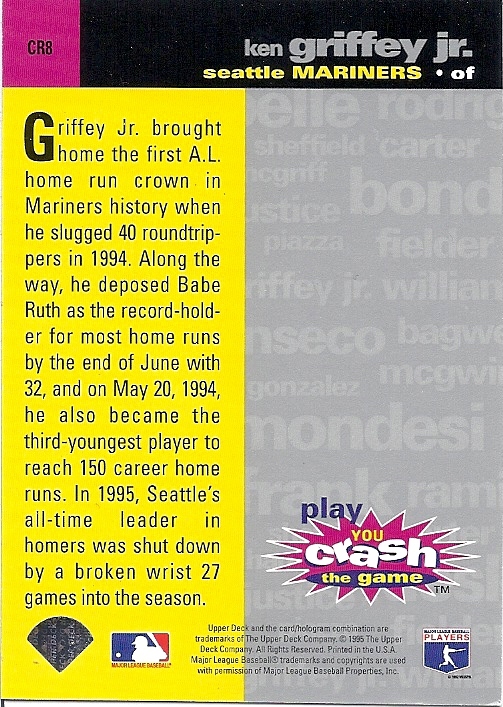 This card was included in a recent trade stack from Larry the Legend of Emerald City Diamond Gems, so I don't feel so bad about never exchanging the card.  It's one less Griffey I don't have.


Speaking of which, here's all the Griffeys of 1995 Collector's Choice I don't have:
﻿

It's mostly Gold parallels I need.  They were seeded 1:35 packs, and the box came with 36 packs.  This means I conceivably could pull two from that box.

Instead of taking my chances, I set aside one pack for a fellow blogger who is crazy about Collector's Choice but too young to have enjoyed it.

And if he pulls a gold signature Griffey, I'm gonna kill him!

Funny thing: that box produced one Griffey: a What's the Call subset which I already have lots of.  Not really funny.  Depressing.

Mind you this is an entirely different set from Collector's Choice Special Edition which had a wonky little foil box that said SE and a lot of blue for some reason.  CCSE was pretty awesome, too.  It gets it's own post.

Just for fun, here's all the silver signature parallel cards next to their regular versions: 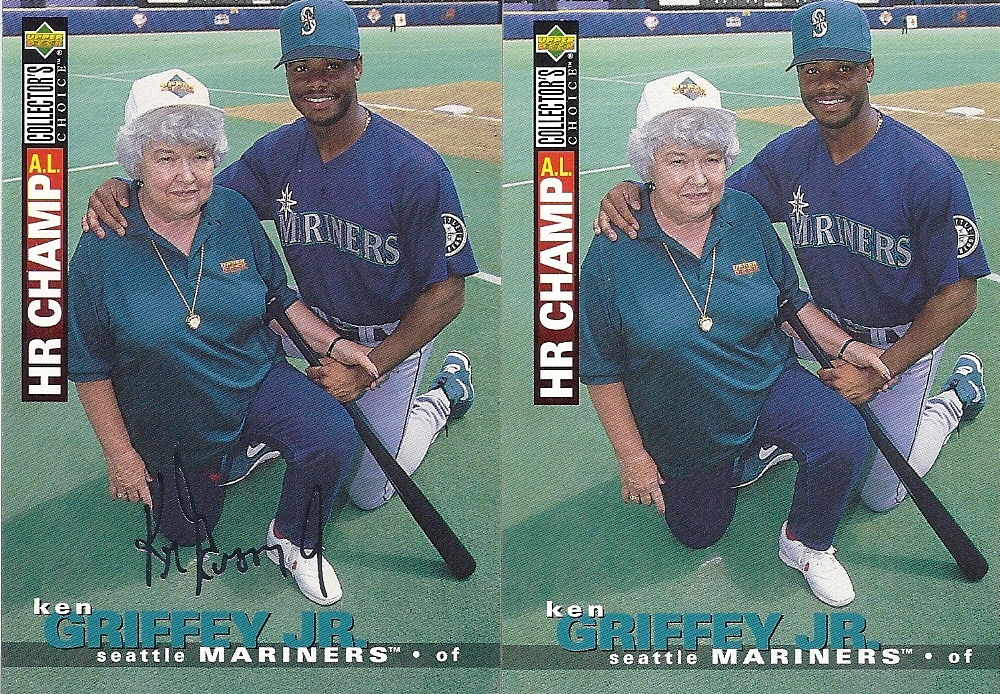 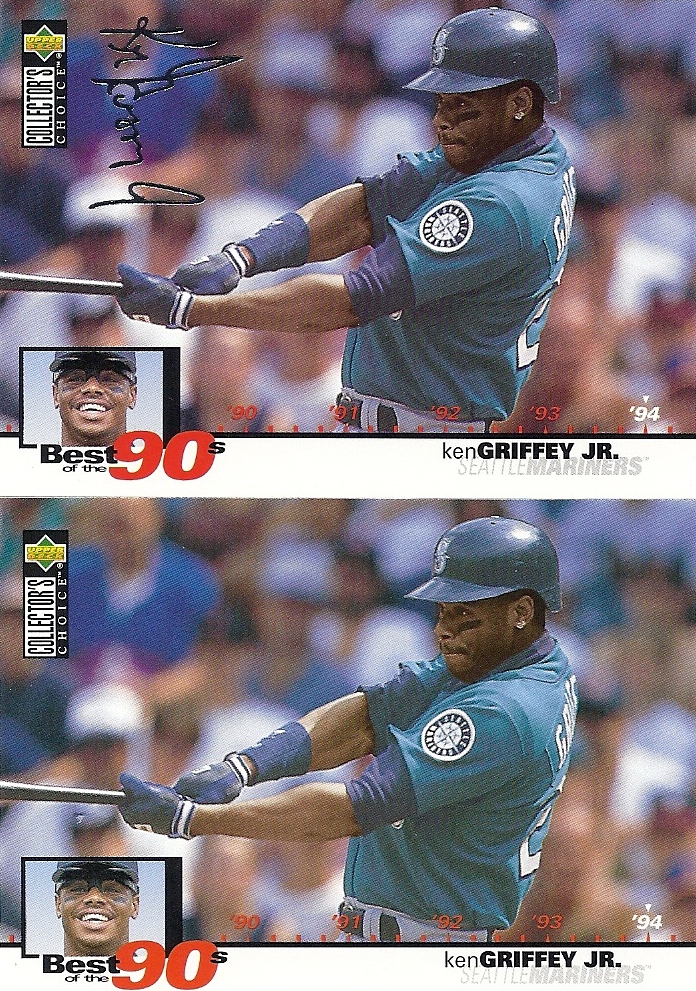 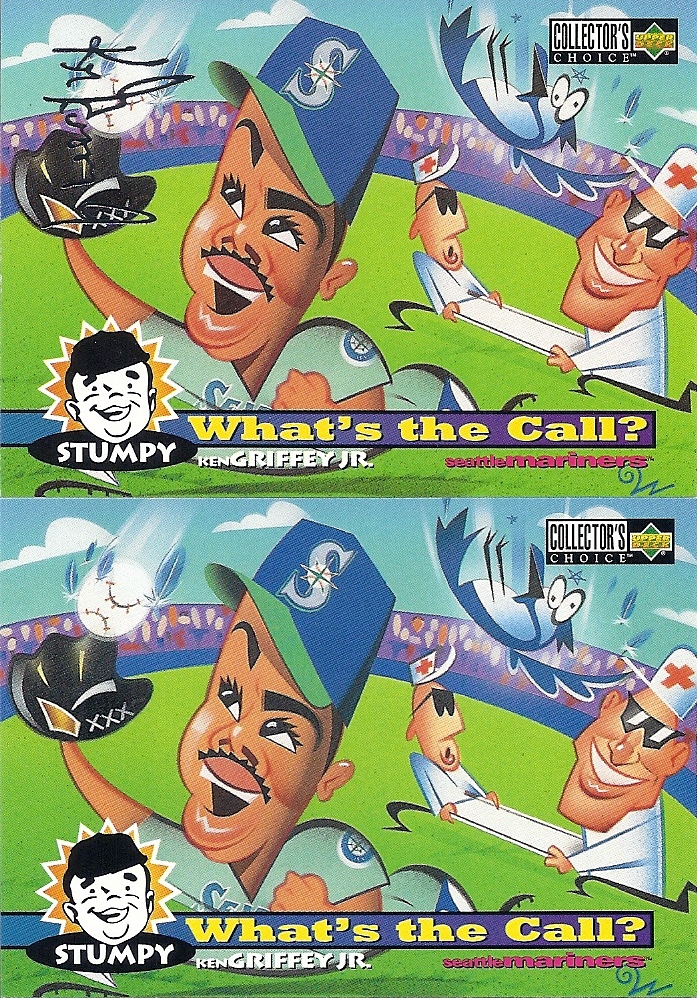 Stay warm!
Posted by The Junior Junkie at 12:57 PM