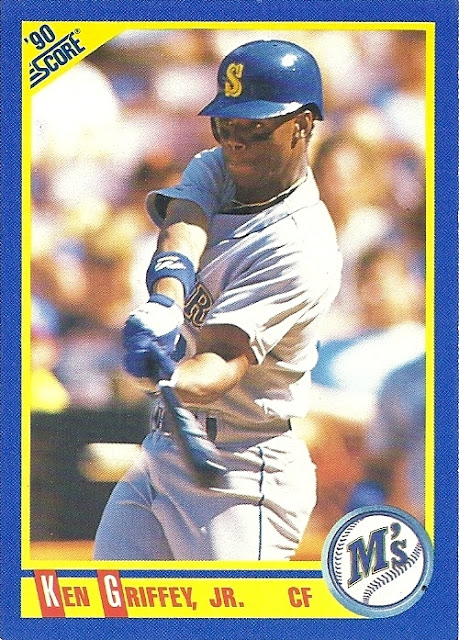 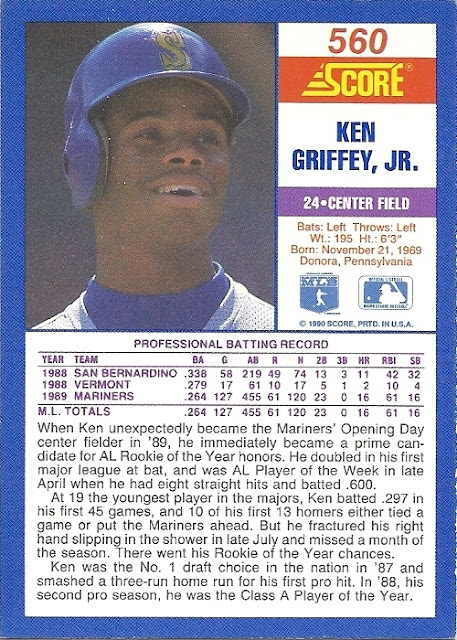 In my collection: 15 regular, 2 Rising Stars

Is this a good Griffey card? Yes.  Despite being an often-overlooked design of the overproduction era, this card has a lot going for it.

The set: I don't know how you feel about the overproduction era.  Most people experience a kind of embittered wistfulness, a love-hate if you will.  When I look at this set, I think of Mike Scioscia.  Don't ask me why.

Score was into initials for a while there.  They did it again in 1991 where, like in the beginning of a fairy tale, the first letter was huge and the rest was regular-size.  Here they highlight the first letter of both the first and last name of each player (but not the Jr).  If you just focus on the red, all you see is KG.  I have never called Griffey KG, but thanks to Score I may start.  Plus it makes me think of Tenacious D.

Ron Kittle, on the other hand, is RK.  That just does not flow.

Overall this is not a bad-looking set.  The bright colors are great despite drawing the eye away from the picture a bit.  They do go with the Kid's helmet surprisingly well.  And I've said it before: Score knows how to feng-shui the back of a card.

Hee hee.  Yeah...you wanted this.  The back is even better:

They did the compulsory Score Dream Team subset, too, but it's all washed-out-lookin' in 1990 and Griffey ain't in it, so......yeah.  Let's just get to the KG (hey, that sounds pretty good): 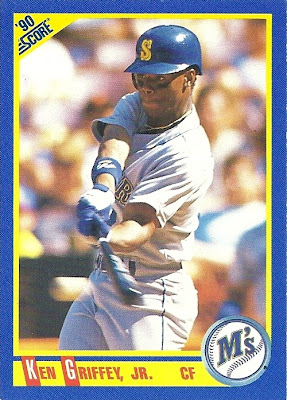 Junior is doing that wide-eyed, pursed-lips thing he does when he's getting all explosive on a ball.  You see a lot of players make that face mid-swing, and when they connect, you know that ball is going for a ride.  Far.  This is especially true when Griffey is the guy making it happen.  Poor ball.... 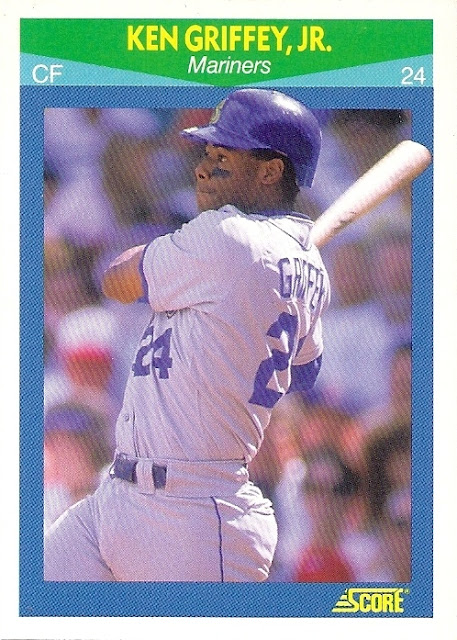 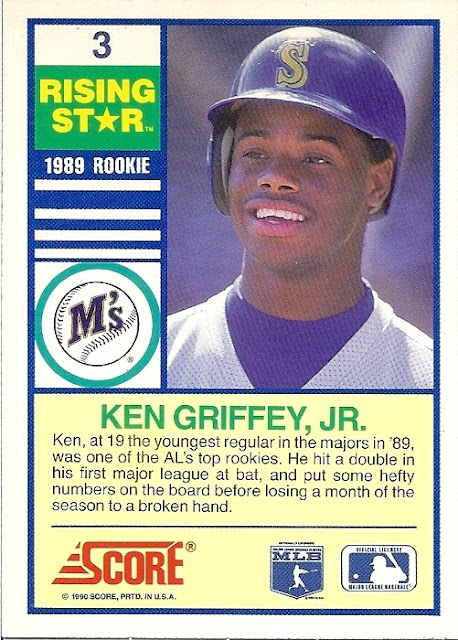 This blurb does it right.  Reanimated triceratops skeleton would be better, but overall this works just fine.

That's the Griffey Rising Stars card which came in a little box with 99 other cards not quite as good as this one - Sosa, Belle, Randy Johnson, Ventura and Steve Finley to name a few.

The name plate looks like the pointy end of a big, green arrow pointing down as if to say, "See this guy?  This is the guy."  From the trajectory of his eyes, I'd say that ball is gone (I always say that).

Score also made a Superstar set and a McDonald's set that year.  KG made it into neither, primarily because he fractured his hand saving puppies from a terrorist fire.