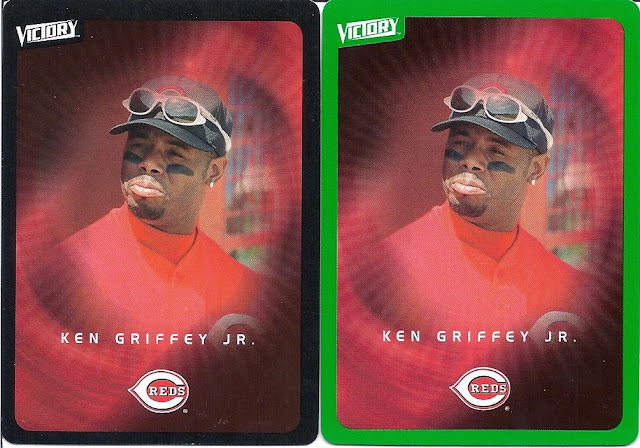 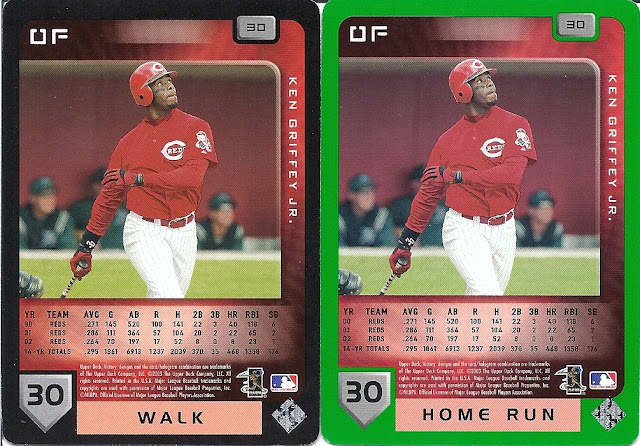 In my collection: 3 regular (walk), 1 green parallel (home run), 1 each Solid Hits, Difference Makers, Laying it on the Line

Griffey looks: like he's chewing on a big ol' slice of lemon

Is this a good Griffey card? Yes.  The nail in the coffin of Victory Baseball and another game to corrupt by adding drinking.

The good thing about the set is that with so few players in the set you were likely to get stars in every single pack.  The bad thing is that 2003 Victory totally sucks.

Victory never really did it for me even before this set.  I look at the Victory Griffeys I have acquired in my time collecting and I don't get excited.  It seems Upper Deck sensed this antipathy because in 2003 they changed philosophies by making the entire Victory brand into a game.

Nothing against card games - I love them, particularly Drinking Poker, Drinking Rummy, and Drinking Phase 10 (Drinking Battleship is also extremely fun, but there are no cards involved - if you want the rules, shoot me an e-mail).  But there is an upper limit to that love.

I used to poke fun at my buddies who played Magic: the Gathering while justifying baseball cards because they are based in reality.  The joke's on me: I still collect baseball cards and now being nerdy is cool.  Who saw that coming?

Anyway, Victory baseball failed because generally speaking card gamers aren't into sports and sports card collectors don't have time to play games.  It seems Upper Deck was aiming for that "nobody" demographic that is so popular in Hollywood these days. 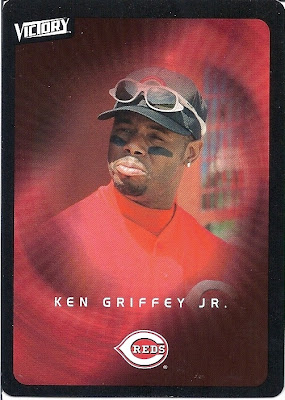 Let's get one thing straight: this is an awesome card because it's a Griffey card, and that is awesome.  But, it seems that in an effort to further alienate fans of standard baseball cards, Upper Deck chose photos of everybody's favorite ballplayers in compromised positions.  The Ichiro card has him slipping on a wet floor in a Seattle Walmart while the Chipper Jones card features him choking on a gigantic burrito.

Sure, I made both of those up, and yet here is Griffey mugging like he's chewing on a big ol' slice of lemon.  Remember Looney Tunes when Sylvester the Cat would refer to others as "sourpuss?"  This is what he was describing.

Solid Hits was 1:4 packs, Laying it on the Line 1:5, and Difference Makers is the rarest at 1:20.  Other subsets included Clutch Players, True Gamers, Run Producers, and Winning Formula.  Griffey appears in none of those, so as far as this blog is concerned they don't exist.

These are kind of inserts, but they can be more accurately described as short-printed subsets.  They all contain some form of foil in the field behind the player photo on the numbered side.

I don't see on these cards where they could possibly influence gameplay.  Maybe I don't understand the game.  If someone has a rules card for this set please e-mail me a scanned image.  The mind boggles....

I have some version of every Griffey in this set.  Here are the parallels of the base card I am missing:

I have to admit here that I have never played this game.  I'm allowing for the possibility that it may be really fun.  If it is, send me enough cards to make two decks (I assume that's how it's done), I'll bug my wife until she plays it with me, we decide it's boring and add a drinking element.  Bam.  Successful game.

In the interest of providing you with high-quality scans of every Griffey in my collection, here's a nice one of each individual card. 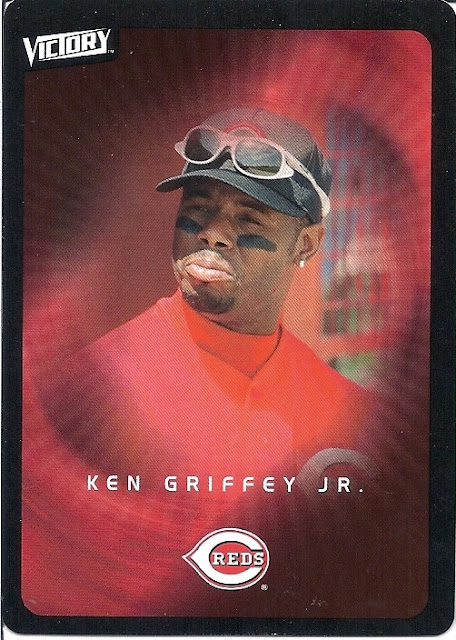 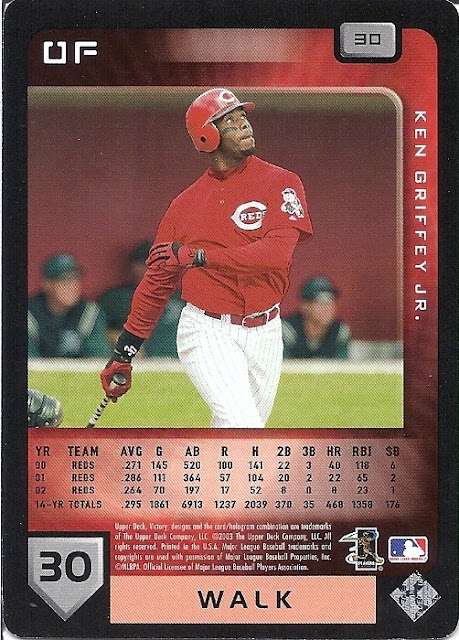 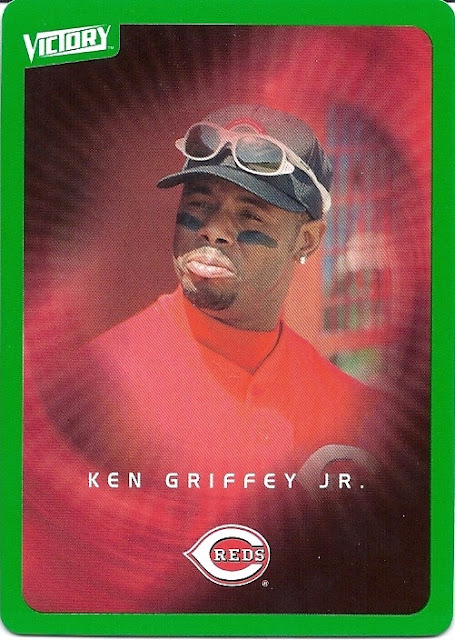 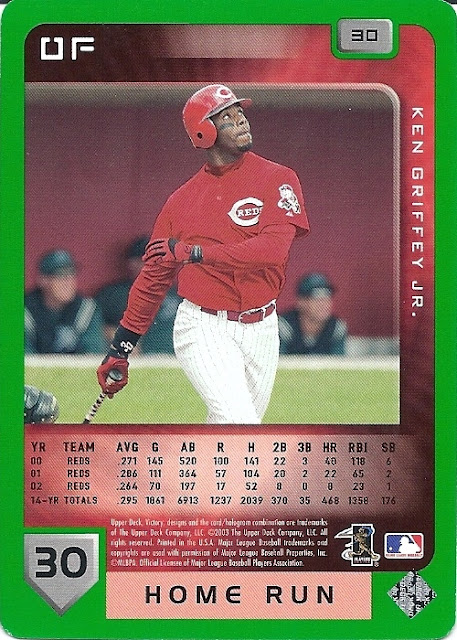 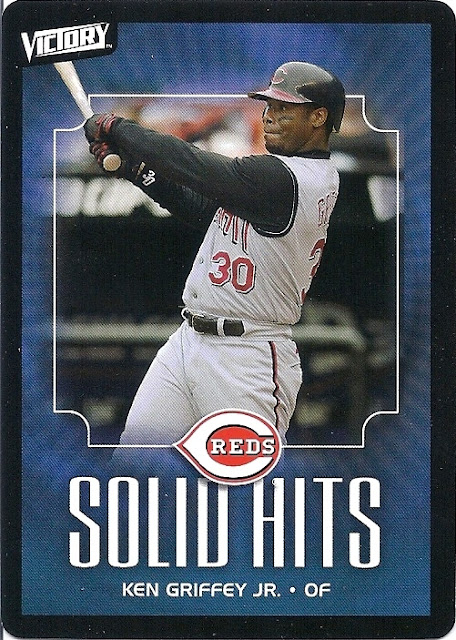 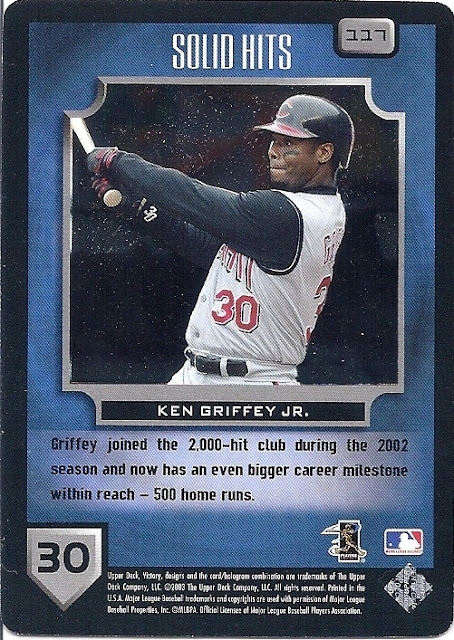 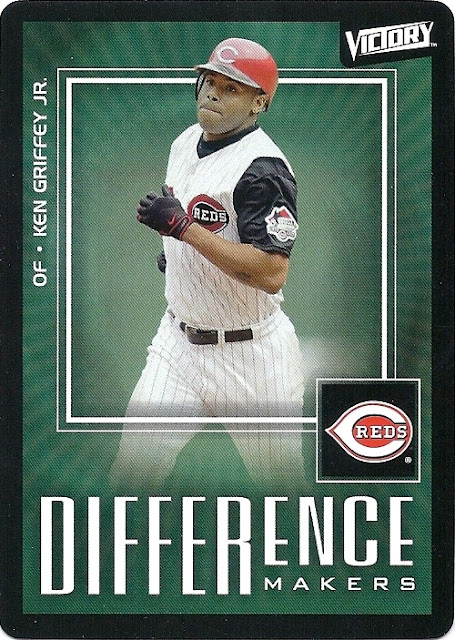 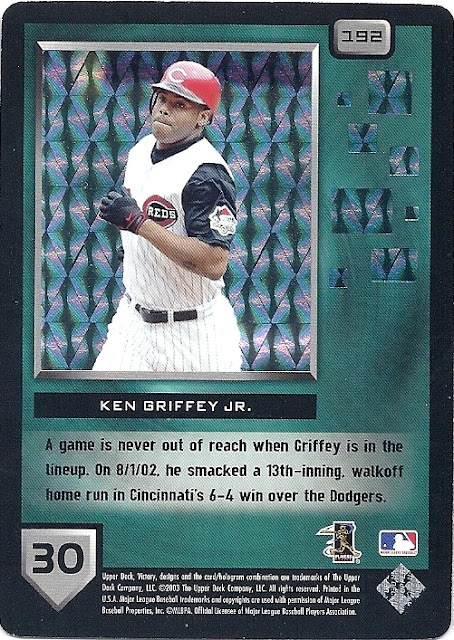 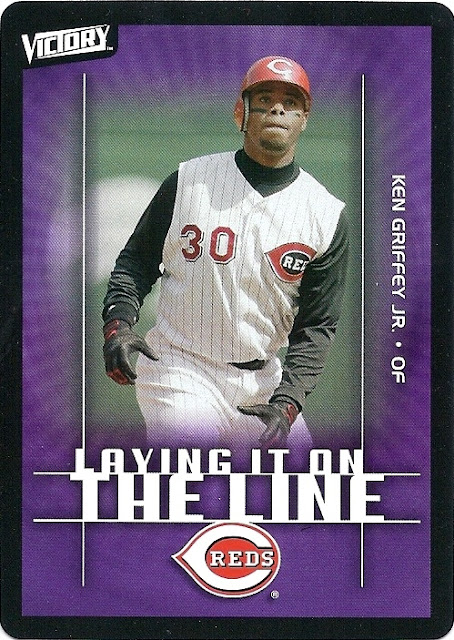 Oh, you're one of those "stay through the credits people," eh?

Well, imagine Nick Fury inviting you to join the Avenger Initiative.  Congratulations, bro!
Posted by The Junior Junkie at 4:36 PM