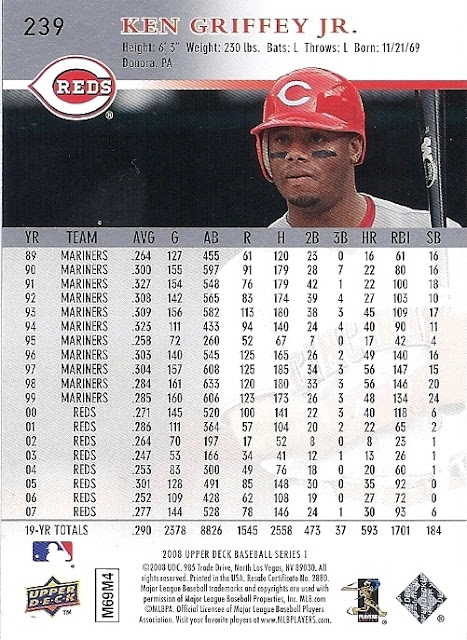 Is this a good Griffey card? Yes.  One of the best design years for Upper Deck, and a card depicting the Kid in his comfort zone: the aftermath of a home run swing.

The set: This is the best-looking Upper Deck set in recent memory - simple, elegant and modern.  The design is comparable in dudicality to their 1995 design, my favorite Upper Deck set of all time.  Here they are side-by-side:
﻿
﻿Simple design, centered foil name, team, position.  Boom.  Done.

This look brings more focus to Upper Deck's tradition of stellar photography, an aspect of their card production that has suffered in recent sets.  Nothing they did after 2009 has been particularly mind-blowing, but '08 nailed it beautifully.

Just look at all these great shots: 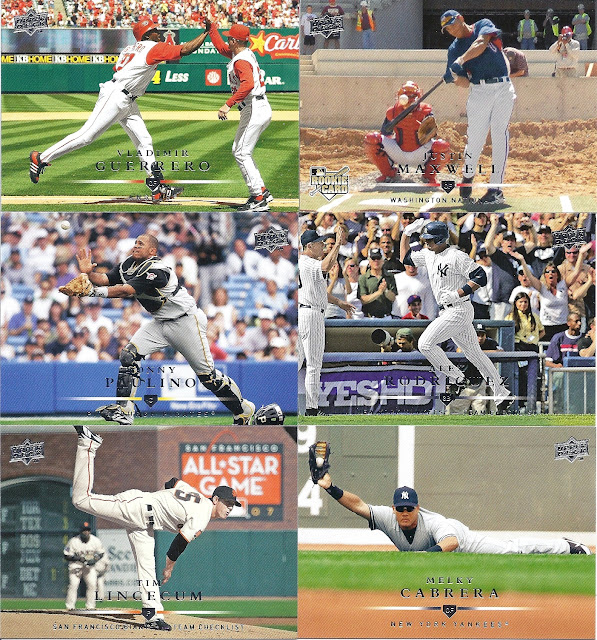 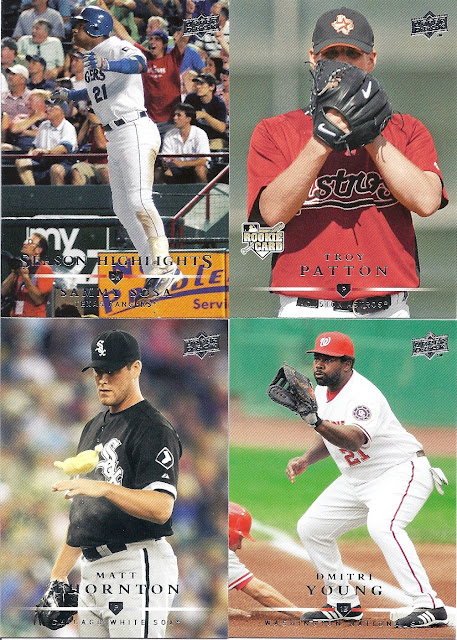 I am inspired.  Let's go plant a tree and write poetry and stuff.

For some reason, they also made a "1st Edition" set.  That card looks like this:

Griffey look sated, like he had one of those swings where you connect so perfectly with the ball that you don't even feel it.  Ahh, satisfying.  Another successful launch.

Hey, what is the purpose of a First Edition set, anyway?  Is it like a traded set that comes out before the regular set instead of after?  In that case I guess it's not that bad an idea as it makes the official set that much more accurate and up-to-date.  But do they have to make it so plain?  Same picture, no foil, no gloss, just boring. 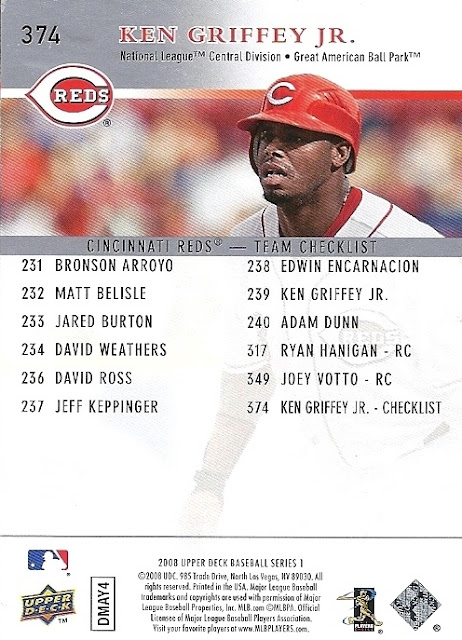 I like to think that's a shot of Griffey a few steps off the bag, getting ready to make one of his 6 steals of 2007, the most he would amass since he left Seattle.  Sadly the players on the back of the checklist weren't quite up to making a winning season, and they wouldn't be until 2010 when Griffey was already gone and the lineup was really starting to come together.  They look pretty solid now, reaching 2 division series in 3 seasons.
﻿
Say, remember that show with the lost humans in the spaceship capering around the universe with the talking dog and the wisecracking alien, trying to get home, and they have all kinds of wacky adventures but also learn important lessons?  I believe it was called Starquest:﻿ DSV*, and Fox cancelled it 4 minutes into the first episode?

I made all that up, but doesn't it sound like a thing?

The backs of the Starquest cards have a slight close-up of the picture on the front.  Also, the SQ cards from both series make a single set, meaning Griffey is both #SQ-4 and #SQ-51 in a single 60-card Starquest set that appeared in both series of packs.  Confusing?  Don't worry - I'll understand it for the both of us....

Here's the three regular set Starquests I have:
﻿﻿

One thing about these Starquest cards that I completely resent is that you know if you got a rare one right away because they tell you right there on the card.  Look on the top right of the backs: "Common," "Un-common," "Like, Crazy Rare," and the ever elusive "Non-existent."  I hear when Upper Deck gets their license back, they are going to just slap the Beckett hi value right there on the front of the card.

Despite that one bizarre quality, the Starquest cards have great binder presence when you've assembled lots of different colors and grouped them together.  I may start picking up some variants for this purpose alone. 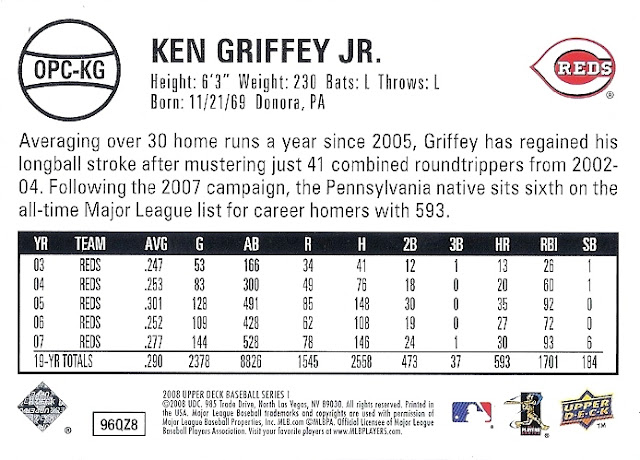 The O-Pee-Chee insert is actually really nice.  The picture is great and the blurb on the back sums up Griffey's awesomeness pretty well for that time.

And how about that dandy little mustachioed fellow on the Kid's sleeve?  I assume he has a cute name.  Mr. Red, perhaps?  Cincinnati Cecil?  Anyone?

I must admit that I'm still on the fence about the whited-out background.  It makes the card feel more plain as a whole, but it also intensifies the portrait nicely.  You know what?  Nevermind - I just convinced myself.  This card is awesome.

Here's all the Griffeys from 2008 Upper Deck I don't have:

That Gold parallel is by far the most pricey of those listed, but I hate spending a lot of money on a parallel for a bit of differently-colored foil and a number.  I'd rather get a completely different awesome card.

Hey, have a great weekend!


[* It was Seaquest: DSV starring Roy Schneider, and it was a submarine, a talking dolphin, and a wisecracking Jonathan Brandis.  Everything else is the same as I described.  Also, cool theme music.]
Posted by The Junior Junkie at 9:56 PM