Too Many Medallions: 1998 Ultra 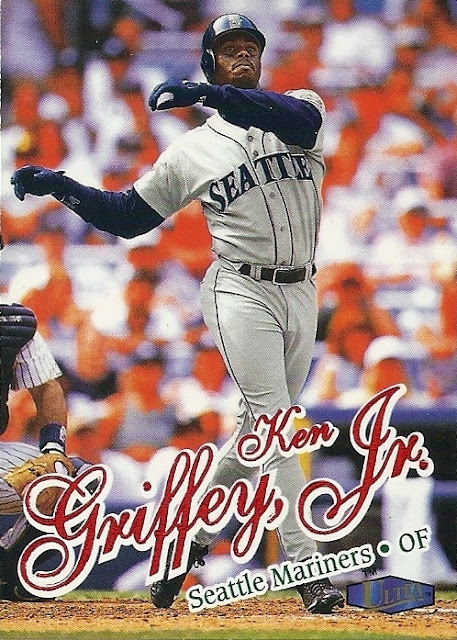 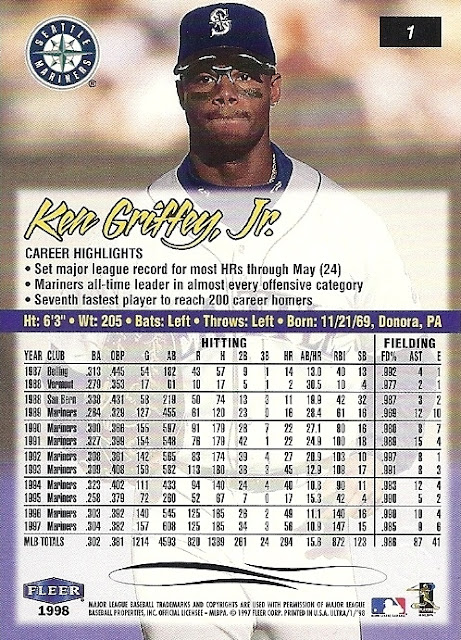 Is this a good Griffey card? Yes.  One of many card #1 cards assigned to Griffey by card companies, particularly in this set, and an exciting pack rip due to the large number of parallels and inserts.

The set: '98 Ultra was hitting the shelves right about the time I stopped collecting.  The officially-sanctioned Baseball Card Club at my school had disbanded, and I had nothing else keeping me engrossed in the hobby.  Plus I discovered girls.

You know, now that I think about it, it was primarily the girls that distracted me from collecting.  Anyway, I wasn't buying packs.  That's what I'm saying here.

The design is nice and simple: full-bleed, nice raised foil script, and the updated Ultra logo.  The photography is also really good.  The back features a full-bleed, full-card photo with tons of stats and career highlights.

I know you card collectors can relate to this: you know when you're organizing a bunch of cards and you can't really tell what year the card is?  You may try to glean it from adding a year to the last line of stats or squinting to read the tiny copyright date.  Well Fleer noticed, so they started putting the set year in bold underneath their logo on the back.  Upper Deck started doing this as well.  Such a small change but great for collectors.

This set has an El Guapo-worthy plethora of inserts plus three different parallel sets, one of which is 1/1 (this one).  The subsets and checklists are all short-printed.  Those combined with the Gold, Platinum, and Masterpiece parallels add a big chunk to the "need it" column of '98 Ultra making this set a real asshole.

Did I mention there's four of those 1/1 cards out there?  And one is a checklist?  Yeah.  Ouch.
﻿﻿
If you add up all the base cards, subsets, parallels, inserts, and the four 1/1's you get 32.  I need 32 different Griffeys to complete this set.

I think that if I had continued collecting through this time in the industry I would have developed an ulcer, something I did not get from girls.  This means that card collecting is, in fact, more frustrating than women.

It may also be more expensive.﻿  Think about that.

﻿Moving on, The toughest cards not counting the Masterpiece parallels are the Diamond Producers and Diamond Immortals inserts seeded 1:288 packs.  Both are valued in Beckett at $40.  Naturally, one is available on eBay for $720.00 (at the time of this post).  Yeah, it's a PSA 10, but come on.  You can get a 1993 Finest refractor for hundreds less.

Almost every insert from this set has Griffey as card #1.  That makes me want them even more.

I don't know what half the inserts even look like.  Remember when Beckett used to put pictures of all the different base and insert cards right there in the listings?  I miss that.  It would whet my card-buying appetite and give me the means to come up with a good want list.  Then again, it would probably be a lot thicker and more expensive (the Beckett, too).

Enough of that.  Let's look at some Griffeys!!! 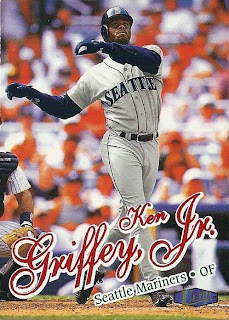 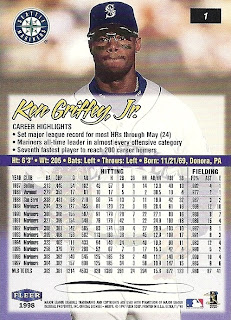 How great is that front picture?  I don't even know what this guy just did to that ball, but I bet it was awesome.  Now he's watching his hit soar like a boss in no rush to run, taking in the awe of the crowd.  And I swear he's about to Dougie to first.

The lighting in the photo on the back is pretty much perfect like that of a late-afternoon game.  And look at that stat box - they did a great job fitting all that on one card.  And are those fielding stats?  Nice. 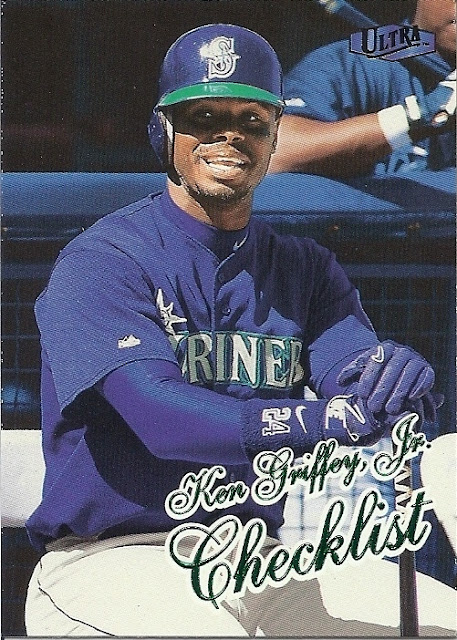 Checklists have come a long way.  If this didn't say "checklist," it could very well be the guy's base card. 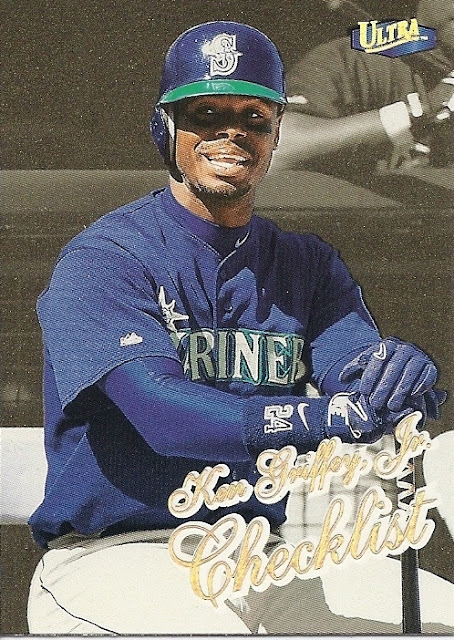 This is much better than in previous years when it was just a little foil stamp.  Here's a side-by-side comparison fo the Gold Medallion parallel and the regular: 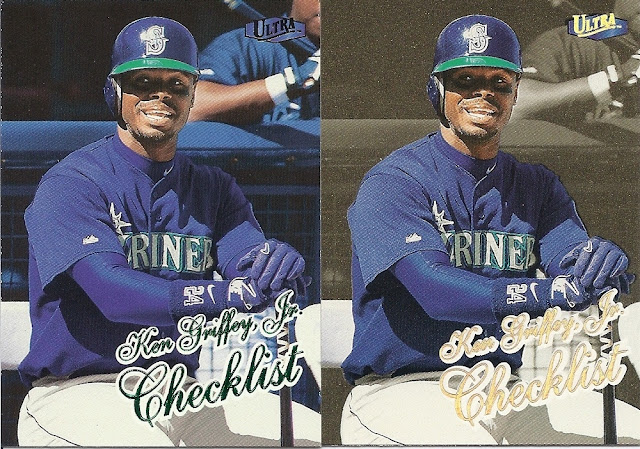 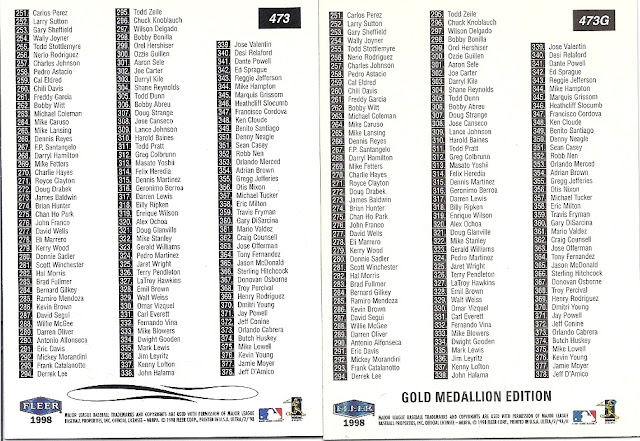 See how the swirly line is replaced by a description of the parallel?  That's a thing, too.

Here's the other checklist: 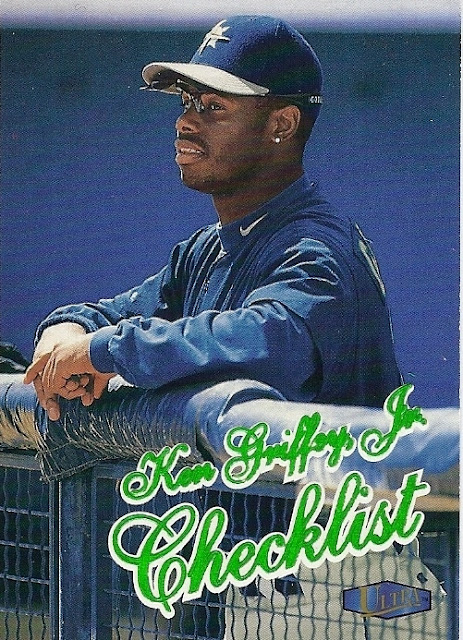 The green writing pops a lot better in this scan.  This is one of three cards from '98 Ultra that feature the flipped-up glasses look, but let's not spend all day on checklists, shall we? 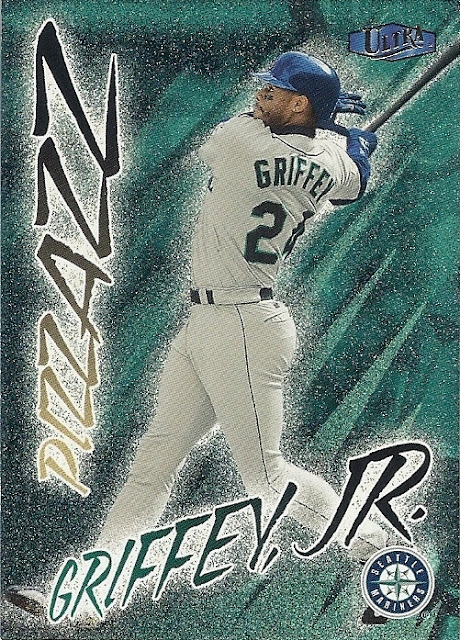 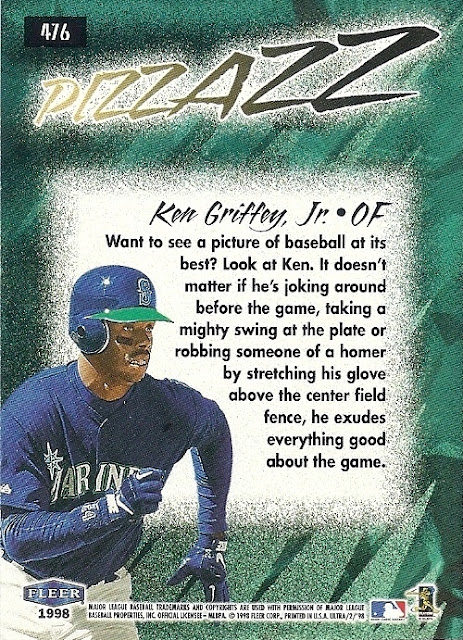 The Pizzazz subset holds the record for most Z's on a Griffey.  That might not be true, but I sincerely doubt there's one with more.  Four on the front, four on the back: this is a ton of freakin' Z's.  If I find more, you'll be the first to know, gentle reader.

The background on the front has a rough texture, almost like sandpaper but less abrasive.  There is also a slight sparkle to it when you hold it in the light.  This is a subset that could easily have been an insert.  I bet it looks great in Platinum.

So I don't have any Platinum parallels, but they are silver and black with the name in sparkly holofoil.  If I ever land one, I'll slap it into this post for you viewiness. 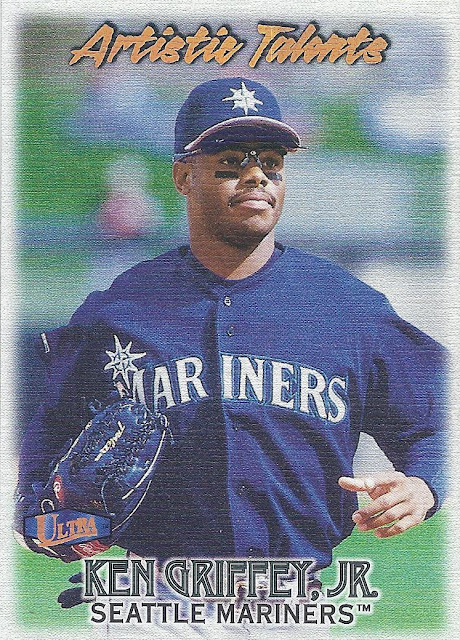 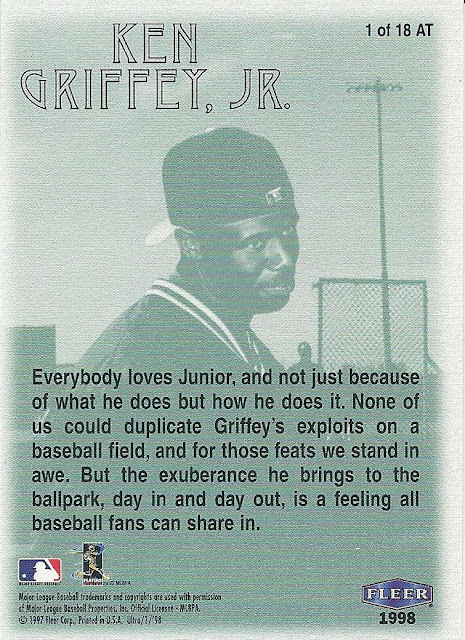 The Artistic Talents insert is printed on a thick, canvas-like stock with his name in a cool font.  The photo on the back is unlike any Griffey pose I've ever seen.  It's kind of a sitcom-ish "puh-lease" look, like someone just said "Hey, Junior, are the Red Sox are on the verge of becoming a World Series-winning powerhouse?" 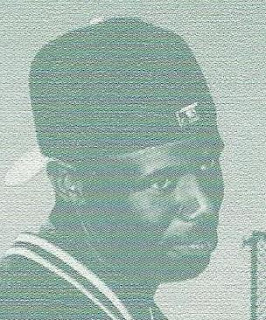 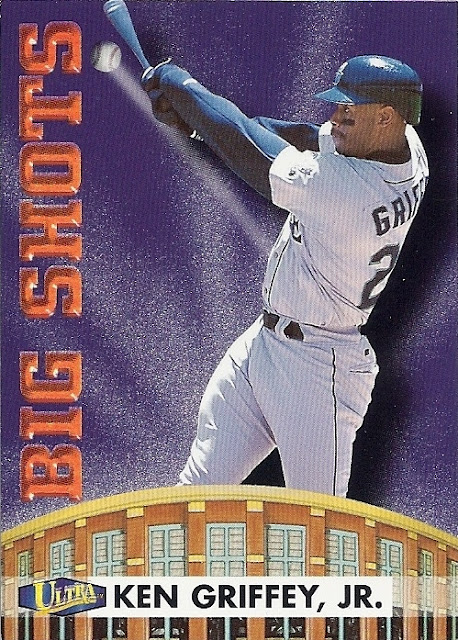 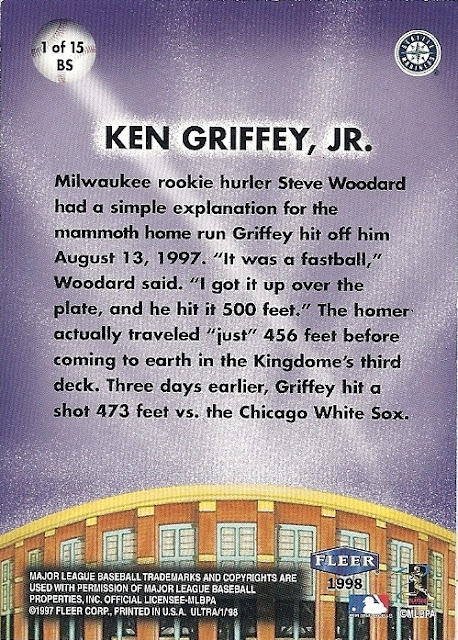 This insert is shiny and colorful.  It depicts Griffey as a giant (as in huge, not San Francisco), towering over the ballpark.  He's a "big" shot.  Get it?  He's really big?  It's a crowd pleaser. 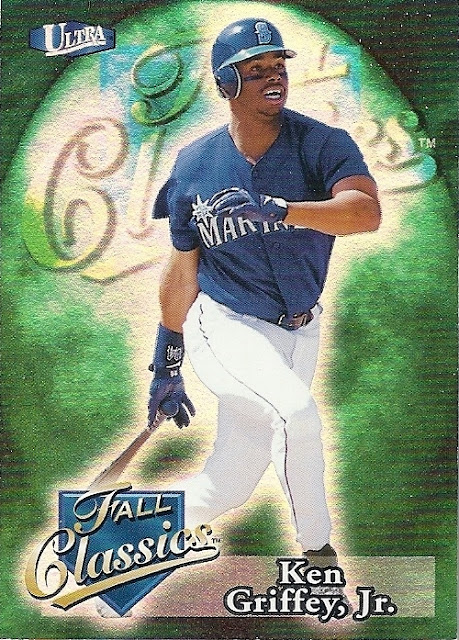 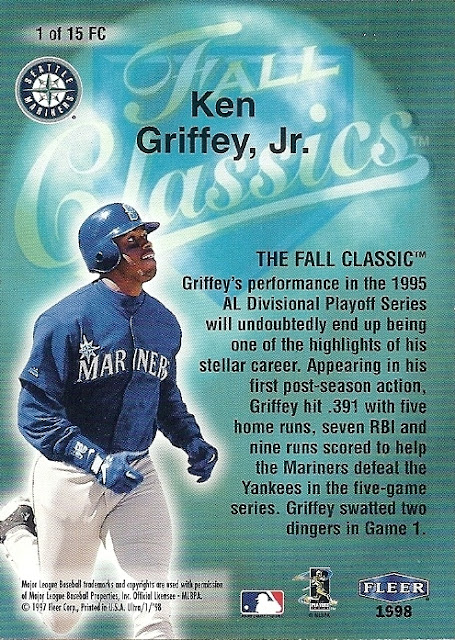 Griffey is framed on this card by a big, foggy egg.  What is hatching from this egg?  Success.

The blurb gives a rundown of how awesome Griffey was in the 1995 AL Divisional Playoff.  Not the most timely tidbit but a nice write-up. 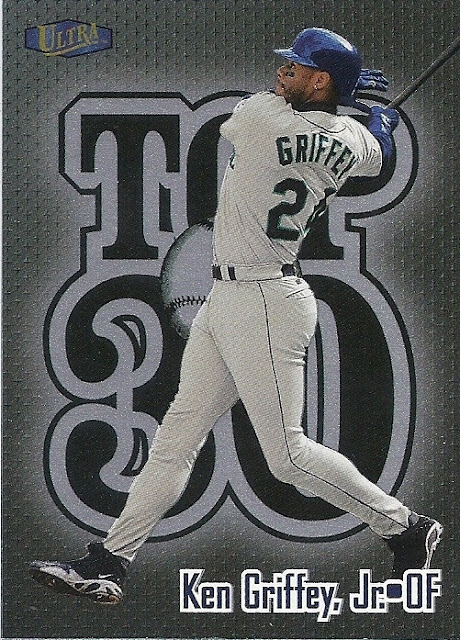 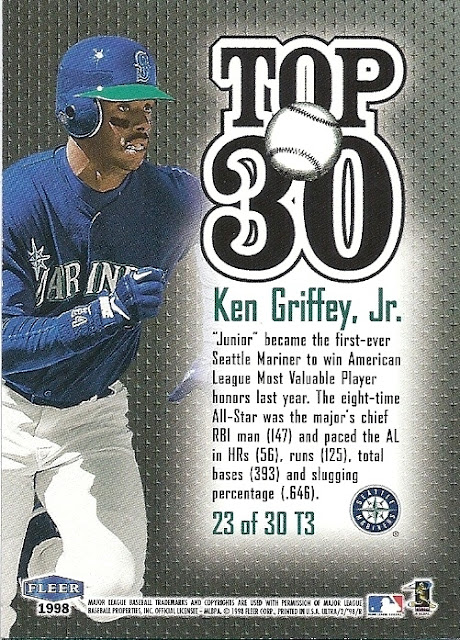 This is one of the better-designed inserts from this set, although the purpose of the insert as a whole remains a little vague.  I'm thinking it's just the top 30 players in baseball according to the folks at Ultra.  It's got a subtle metallic shine to it with an attractive logo; but overall I feel like I just watched a really good commercial (if there is such a thing) for a company I've never heard of, and I still don't know what they do.