Junior and the Chocolate Factory 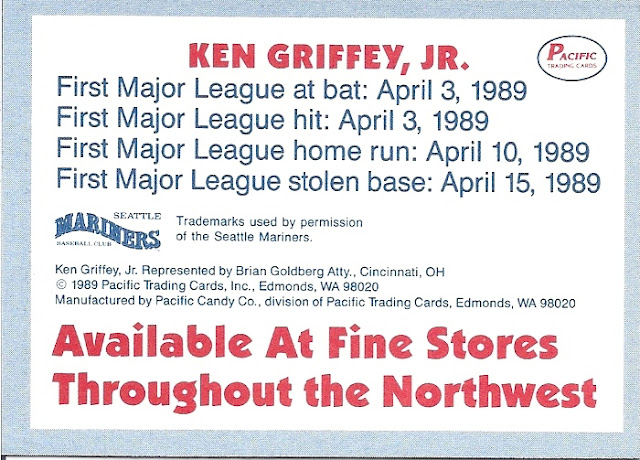 In my collection: 3 total, 1 of each color

Griffey looks: about to take a pitch

Is this a good Griffey card? Yes.  And thank goodness for that, otherwise I'd be buying 23-year-old chocolate on eBay, and there's just no defending that to the wife.
﻿
﻿The set: First produced in 1989, these milk chocolate bars came in both blue and yellow wrappers, the yellow being the rarer.  Three different Mariners-colored cards were made to go with the bars: blue, yellow and white.

Griffey is not the only player to get his own chocolate bar, nor is he the first.  Obviously, Baby Ruth was named after Red Sox slugger Ted Williams.  And the Reggie! Bar with a picture of Reggie Jackson on the wrapper was in fact named after Ron Kittle when he was accidentally called "Reggie" once by his optometrist and the name stuck.

Not really, but you knew that. 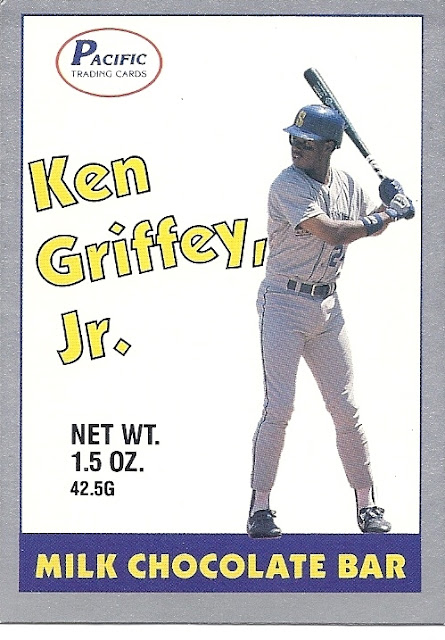 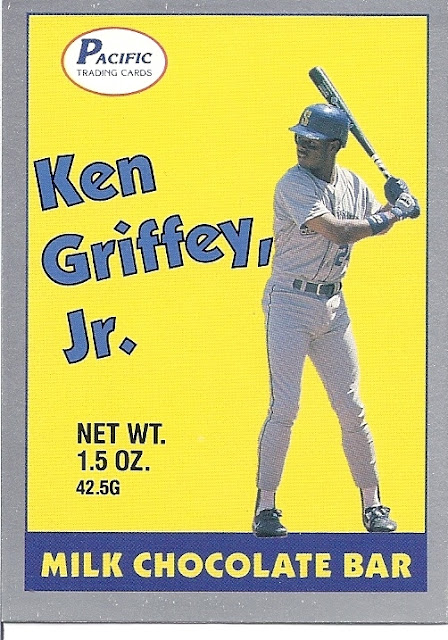 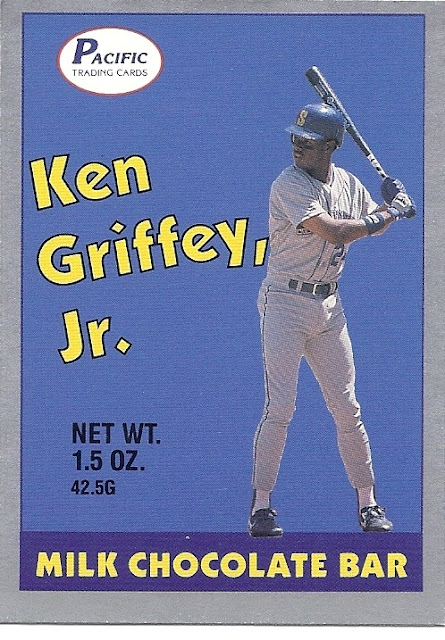 I'm thinking Griffey is about to take a pitch here.  This is not the stance of "blast one out of the park" Griffey.  This is more like "maybe still a little injured so going for the walk" Griffey.  Or maybe he's being intentionally walked, in which case kudos to the smart pitcher.

What I really like about these cards is that Griffey's attorney (and/or agent?) is named on the back.  That's not something you see much on any baseball card.

Sadly, I doubt I will ever have the actual chocolate bar.  It's not that they are expensive (I've seen them go for less than $5.00), or even that it's a perishable item that is extremely old.  I'm gross and can deal with that.  This guy would agree with me on that point.

My problem is that those of us who live in the New Orleans metro area know we are going to lose everything in our fridges and freezers due to a storm-related power outage roughly every two years.  It can't be helped.  If this bar doesn't melt from being removed from the freezer in an evacuation, it will become tainted with residual rotten stinkiness from being left in a freezer with thawing meat and such.  For now, the cards will have to do.

I am on the lookout for the SNES Griffey Baseball game, though, as that is non-perishable.

Still, a neat collectible and probably my favorite oddball.
Posted by The Junior Junkie at 11:28 PM