I tried COMC for the first time last week.  Here's what I got: 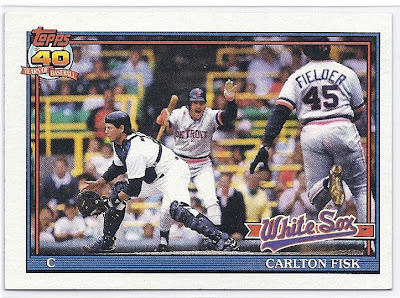 This card is the reason I went on COMC at all.  I've never seen it available at a card show, and I knew I should be able to procure it somewhere without spending folding money.  On eBay I would have had to win it then pay shipping.  On COMC, it was a quarter and shipping was super cheap since I was buying a bunch of other cards at the same time. 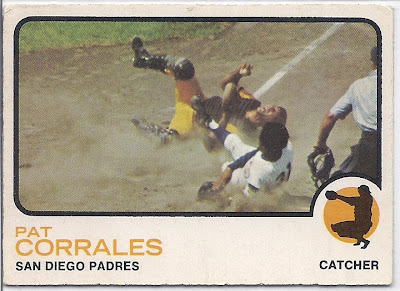 I saw this one on Nick's blog a few weeks ago and made a note of it.  What an awesome baseball card.  I'm not a Pat Corrales nor a Padres collector which brings me to a quandary of late: how should I catalog cards of players I don't collect?  Right now I have binders of players I like in alphabetical order, but this is probably my last Corrales.  I'm starting to think it may be time to start a new binder of just generally awesome baseball cards for players I don't know or keep.  Just a thought.

Have I mentioned I'm a sucker for reprints of cards that were overproduced to begin with?  Well, it's true.  Here are reprints of the '89 Fleer and Donruss plus a '95 Leaf card I couldn't identify. 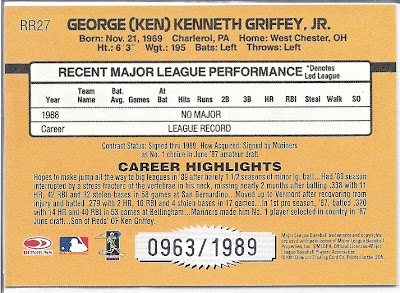 Did I mention the Donruss reprint is numbered out of 1,989?  How is this card not worth like fiddy bucks?  It's beautiful! 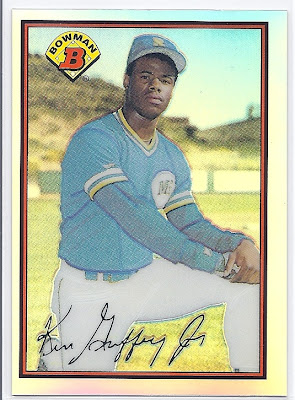 Here is a refractor reprint of the Bowman rookie.  I already have this in Chrome - adding refractoriness is an obvious next move, am I right?  Looks fantastic.

That's it for my COMC purchases.  Altogether I spent like 12 bucks.  I must admit I was very pleased with the whole process.  It was fast, relatively inexpensive, and well-packaged.  I will be doing business there again. 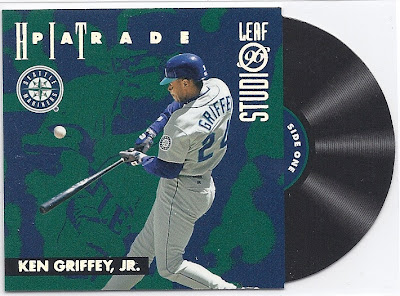 I happened upon this numbered beauty on the bay for peanuts.  I'll be covering this one a lot more when I do my Studio '96 post.  Until then, it's just a cool die-cut card serial numbered in holofoil.  Plus I collect vinyl, so my collector-brain (who has no money of his own) insisted it must be ours.  And less than four bucks shipped - solid.
Posted by The Junior Junkie at 3:02 PM