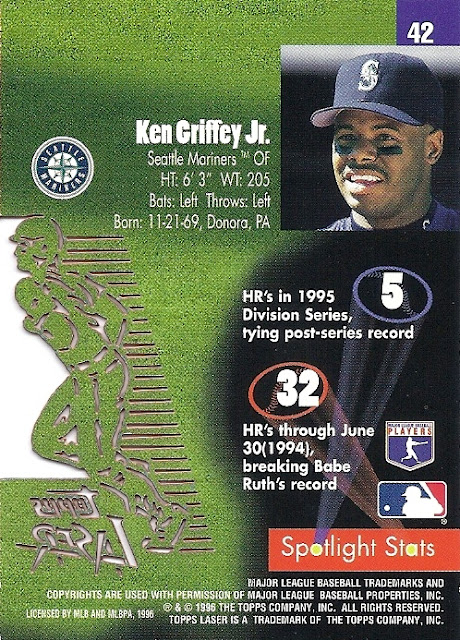 Is this a good Griffey card? Yes.  One of the coolest gimmick sets Topps has ever done.

The set: This is one of my absolute favorite gimmick sets of the 90’s, and it was a great way to kick-start the prolific use of die-cutting by all brands for years to come.  The colors and liberal inclusion of gold foil only contributed to the cool factor.  Great idea, cool logo, solid execution - too bad they didn’t keep this set going.  The packs were a blast to open, and I opened a lot of them.  Sadly, it was just a one-year set.

Laser was the first set to really embrace die-cut technology as part of the design of the set.  1994 SP is the first set where I remember seeing die-cut cards, but it was limited only to card edges.  Laser makes dozens of intricate cuts, most of them within the borders of the card, to form complicated shapes, images, and even the logo.  Topps Laser is produced with perfectly perforated pin-point precision.


This is also the first set I remember that included extra cards in the pack that were there to protect the regular cards.  These also doubled as checklists.  And do I still have them?  You bet I do:

There are four designs in this set, and the packs contained one card of each design.  For the sake of discussion, we’ll name them red runner, gold fielder, black batter and flaming pitcher.  That Griffey is in the Red Runner design, but here are the rest:


Black batter is probably the hardest to find in mint condition because of that card bottom.  The next toughest is flaming pitcher due to all those little jutting points of flame along the side that refuse to go into a penny sleeve without a fight.  Red runner wasn’t a problem as long as you didn’t let the cut-out portion grab the sleeve, and gold fielder was easy as long as you stored it with the complete edge along the bottom.  This last one drove me nuts as I like to keep my horizontal cards oriented to the right, but making the switch for condition’s sake was a no-brainer. 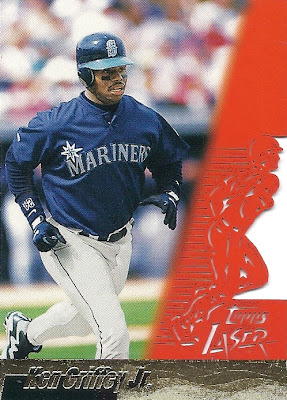 Junior appears to be calmly strutting from first to second, probably following one of his 17 dingers from the ’05 season.  There’s no rush here - he’s just taking it easy.  He’s also mimicking the position of the runner in the cutout section almost perfectly.

When you have two of these and put them together, you can make a hookah (or a fountain depending on your sensibilities) - check it out: 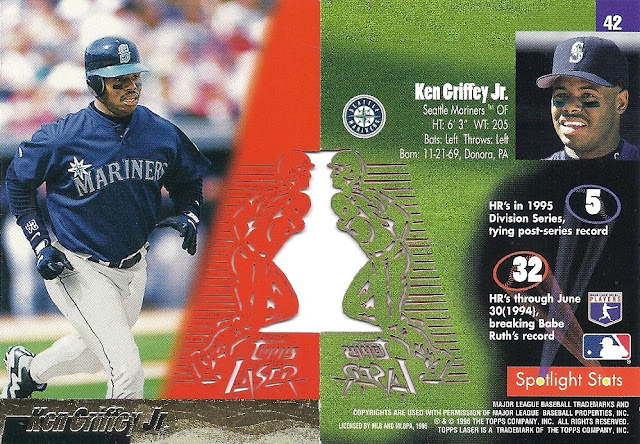 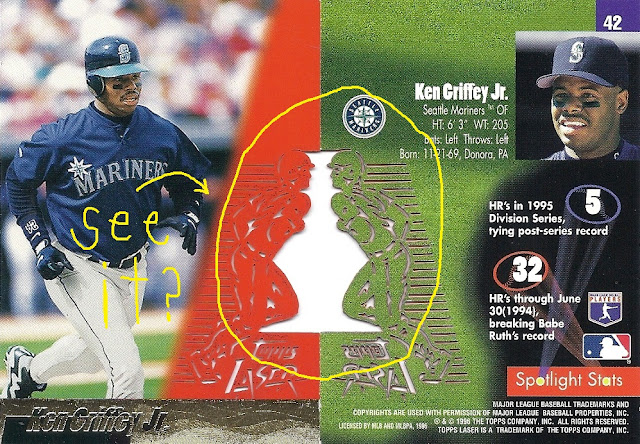 Here are the Griffeys I am missing from 1996 Topps Laser:

These were really fun packs to open, and this is one of those boxes that to this day I'd love to get a hold of and break.  Even 17 years later they are still really cool cards.
Posted by The Junior Junkie at 11:00 AM