The focus of this set was clear from the beginning: give us a unique and intimate look at our favorite ballplayers in a way no baseball card had done before.  The result was a solid run of thirteen sets filled with great photography and a uniquely personal bent.  Almost half the sets didn't even have stat lines - just blurbs filled with cool personal tidbits about our favorite players.  And man, did we ever learn a lot in those first couple of years of Studio.

For example, we learned that a lot of our favorite players are gangly and awkward.  Some are playful goofballs and some have weird hair.  Crooked smiles, unibrows, raccoon eyes, hairy knuckles - all the little imperfections that make our heroes human spring forth from the card and stab you in the eyeballs.  Studio got us nice and personal with intimate portraits of guys we usually only get to see only from the stands, and they did it awesomely with a lot of cool and clever designs.

Here’s every Studio base card design in order: 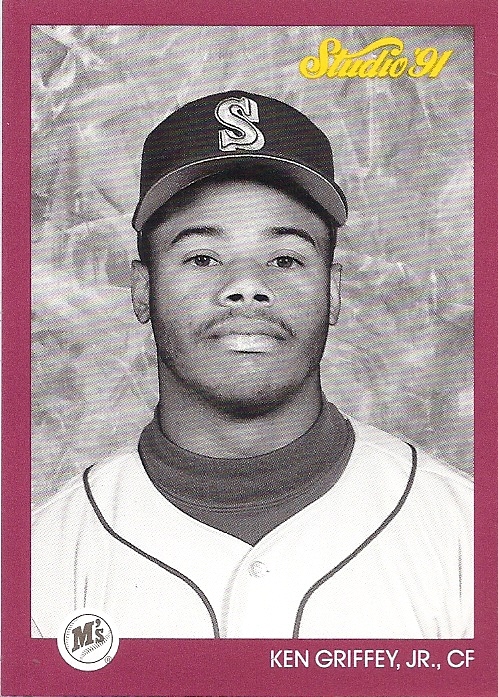 Here is Studio’s core concept in the raw.  While this is one of the better sets to come out of 1991, it is by far the most abrasive and occasionally off-putting of all the Studio sets.  The black and white portraits are clear and stark with lots of awkward and forced poses.  It’s a lot like ’92 Bowman in that there are so many hilarious cards it makes me want to collect the whole set.  And look at that backdrop: they were unapologetic about the fact that these were taken in a portrait studio like one found in a K-Mart or at a Glamour Shots.  Please don’t misconstrue any of what you just read as a complaint.

I like the simple layout of the card with the low-impact player name and team logo, and the Studio logo is cool - my only question is I don’t know what to call that color in the border.  Is that mauve?  Merlot, perhaps?  Whatever it is, it’s on every card and seems to work.  Despite all the weird things about this set, the packs are really fun to open.  A great inaugural design. 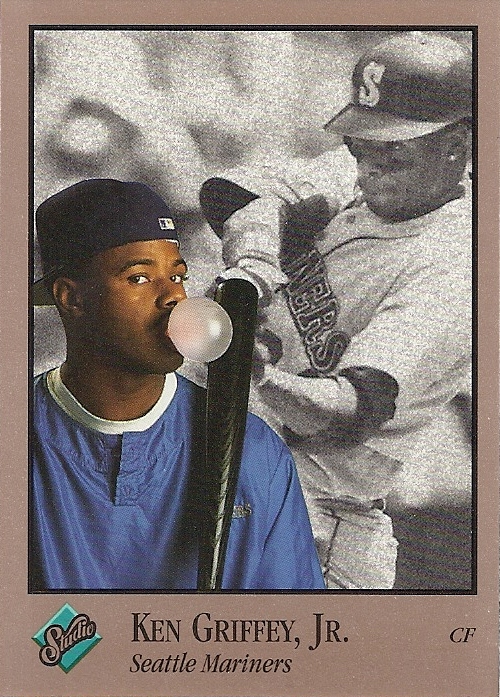 A highly stylized version of the ’91 set, this year they gave us color portraits and replaced the background with gritty black and white action shots in lieu of the Glamour Shots backdrop.  They also put the player name in a bigger, fancier font and gave us a new brand logo with a little more chutzpah.  No team logo this year, and the merlot of the previous year is replaced by a fancy gold tone border.  There are still a few goofy portraits in the set, but overall this is a reasonable and logical progression in design from ‘91 - no complaints. 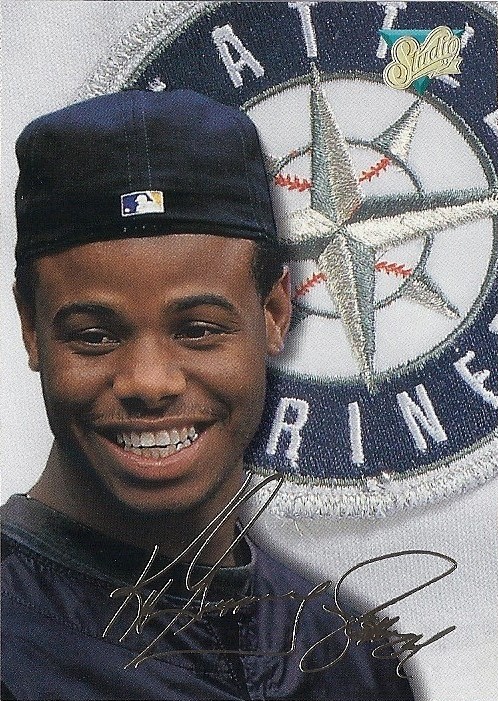 This design consisted of a simple but engaging layout: player portrait over a full-bleed close-up of the team logo patch in the background.  The only elements outside of that are the holofoil signature and Studio logo.  Every card in the set is like the Griffey shown above: very simple, colorful, and fun.  One of my favorite sets of the decade. 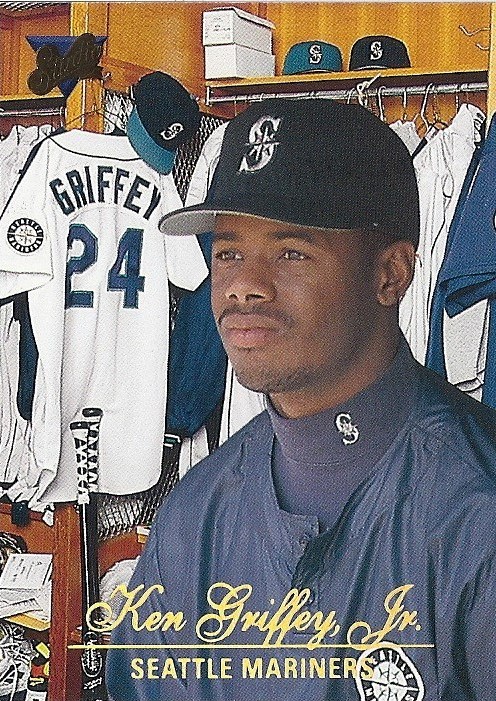 Doing these design timelines has taught me that while I’m a sucker for holofoil printing and fancy script, when both are combined I turn into a total slut.  Studio gets another level of personal here by superimposing the player’s portrait over a mock-up of his home locker.  This draws you into the detail behind the player, a design element that Studio would revisit in the early 2000’s.  Overall this set is engaging and the cards look expensive.  Nice work… 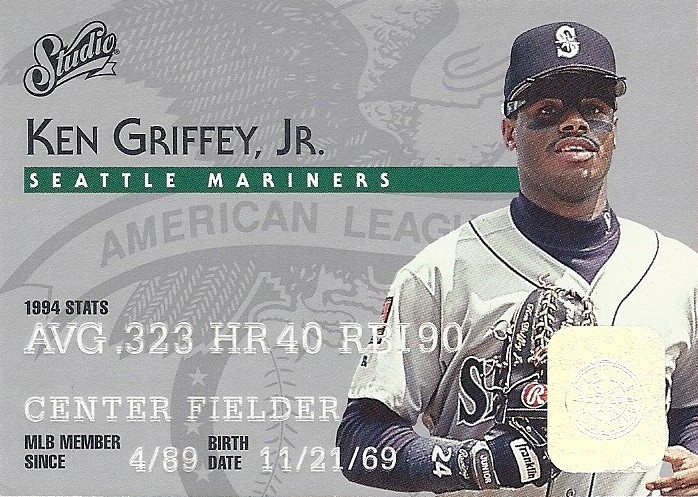 I love this set despite its gimmickiness.  Actually, strike that - I love this set because of its gimmickiness.  While on the surface it strays from the close-and-personal portrait photography a bit, it is clear that they put a lot of thought into this design what with the raised lettering of the stat lines, the holofoil team logo, and the simulated magnetic strip on the back.  The whole cleverly-designed package looks even better on the plastic gold and platinum parallels.  As far as gimmicky designs go, I give this one a lot of…..credit? (sorry) 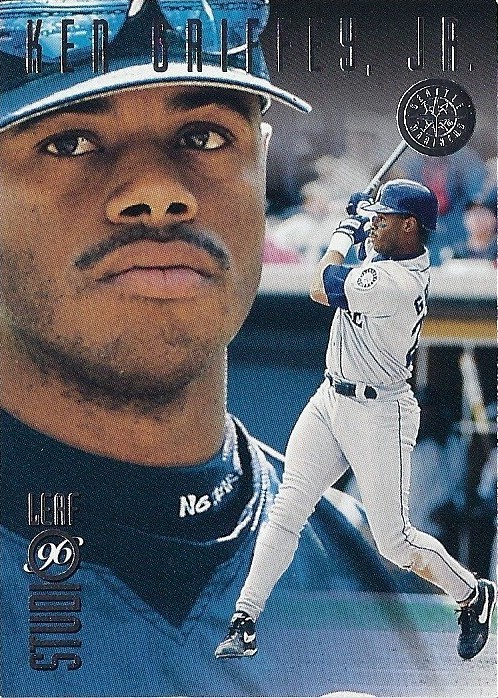 This set sports the first logo change since the ’92 set.  The layout consists of an action shot with a huge, card-sized portrait imposed between the player and the background.  There’s nothing especially unique or eye-grabbing about this design, and even the inclusion of a foil team logo doesn’t help very much.  Not bad, but this design is a bit of a snoozer. 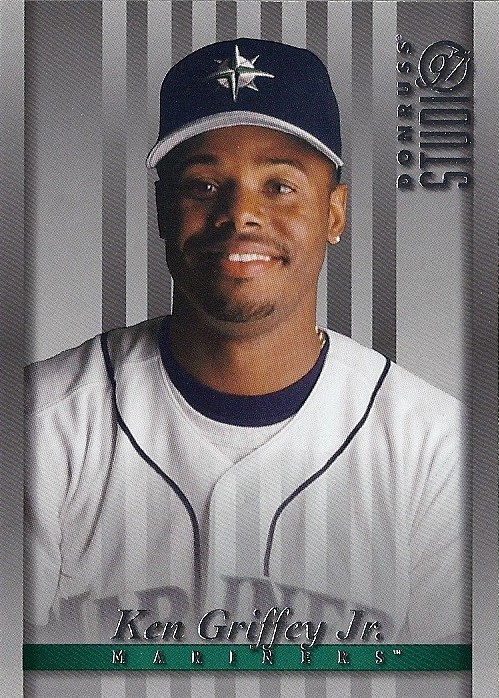 Here is one of the designs that leaps to mind when I think of Studio - just a really well-done set of portraits.  The photography is fantastic with just the right amount of shadow and probably a little airbrushing in some of these guys’ cases.  There are no awkward poses outside of a handful of guys trying to look mean (lookin’ at you, Albert Belle; but all kidding aside, you are totally mean).  The border and background are attractive and unobtrusive as is the great font used in the player name and the single strip of team color along the bottom.

Studio also made this set in an 8” x 10” portrait size so collectors can frame these the way you would a senior photo or a wedding portrait.  I would make fun of folks for doing that if I didn’t have one of Griffey on the wall as we speak (mine is autographed and in a plaque - so sue me).  The Press Proof parallels look especially cool in this set. 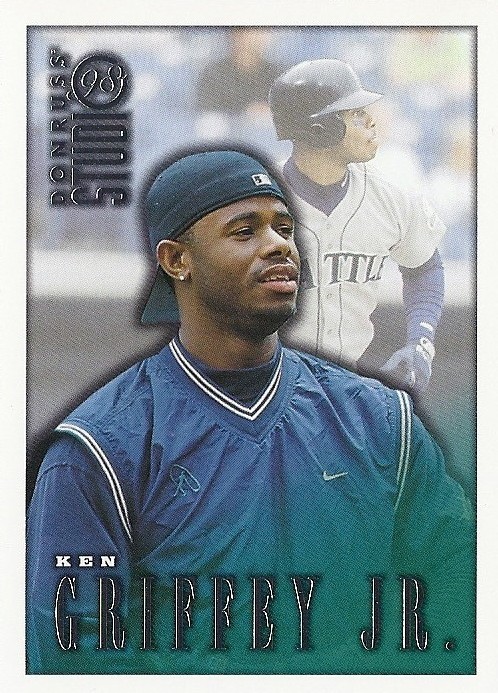 I think this is the weakest design in the timeline which makes sense as this is also the year Donruss went bankrupt.  Here they put a non-studio photograph over a washed-out action shot and separate them with a black outline which looks just awful next to that white border.  There’s a team-appropriate color fade along the bottom behind the name, but I don’t know why.  The name font is cool, but everything else about this card is a miss.  And a mess.  It's a messy miss.

Thus begins a two-year hiatus during which all the Donruss brands would get a redesign from their new owners, Playoff.  When all is said and done and the brands return to the market, Studio somehow comes out the best. 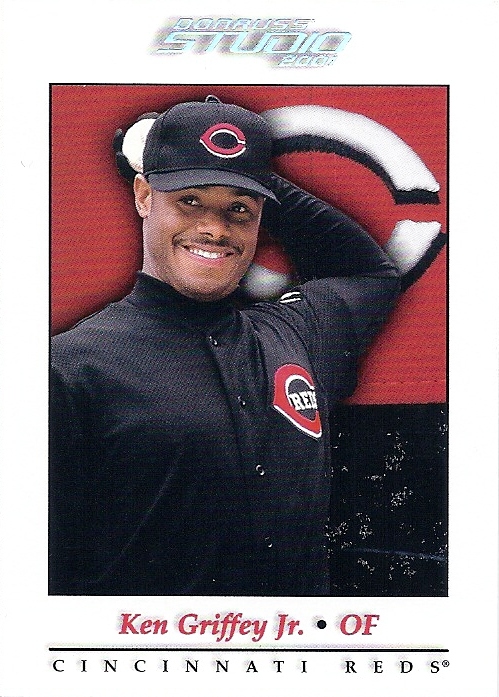 This is Playoff trying to push Studio further into the high end of the market market.  First, we get a new modern logo that also adds a hint of holofoil to every card.  The layout is similar to that of the ’93 set with a portrait over a stitched team logo, but here we get a thick white border and a prominent nameplate along the bottom in fancy fonts with spaced letters.  They also started using a super-thick new card stock making this the thickest Studio base card in the timeline.

This is a great-looking set, but it lacks some of the fun that made previous designs successful, a result of the designers embracing a cleaner, more high-end look.  It looks like a decent insert that happens to be called “Studio.”  I can’t fault Playoff though as this is the direction the designs seemed to be heading even before the bankruptcy. 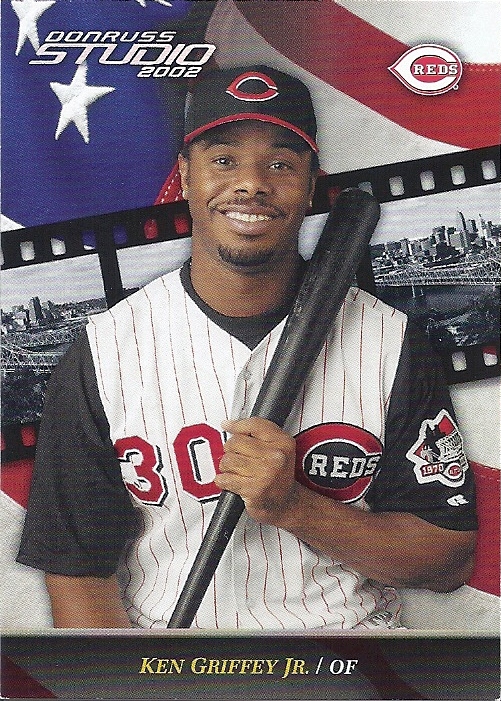 Ah, the sudden and intense patriotism of post-9/11 America.  Every single base card in this set features Old Glory in the backdrop, even for the players who are not American.  There’s also an old black-and-white film reel of the each team’s city back there.  This may be the most fiercely patriotic base set ever made (’01 Donruss is up there, too), but it’s also the last set to feature studio portraits in lieu of standard card photography.  If you don’t like this set, the terrorists win. 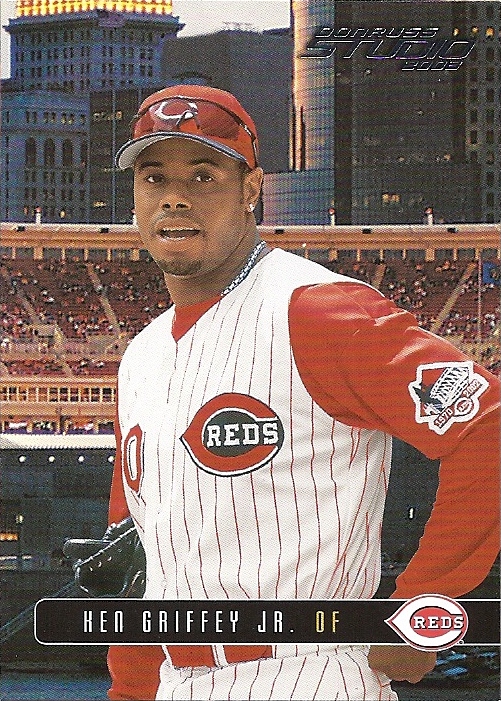 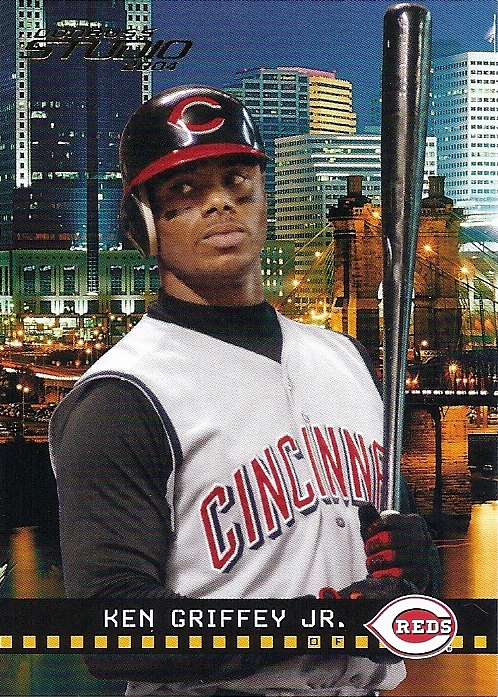 The backgrounds are the stars in both ’03 and ’04, showing Cincy’s Great American Ballpark backed by an afternoon cityscape in the former, and a colorfully-lit evening Cincy skyline in the latter.  While the studio portraits are gone for good, the photographs are still crystal-clear and high-quality in both years.  The nameplates are befuddlingly simple with a plain team logo.  I really like both the designs and can’t really fault them for repetition.  They both look great and are sufficiently different that I’m not going to whine. 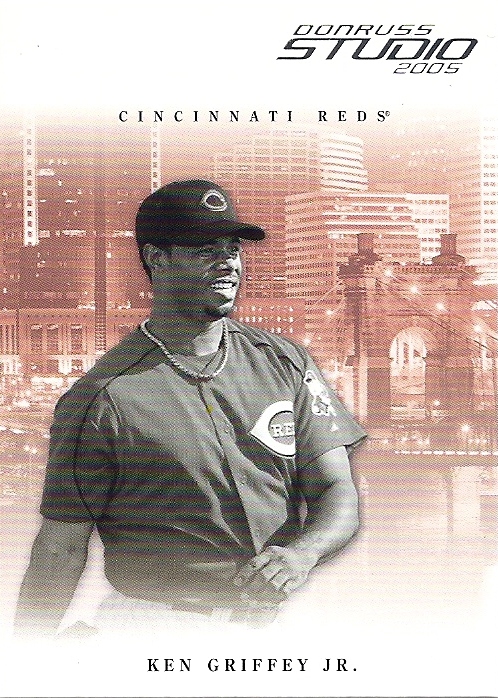 If you look, this is the same perspective on the city as in ’04 but tinted red and bordered in a white fade on the top and bottom.  Junior is superimposed in black and white, but this portrait is not as clear as in years past which is kind of against the original idea of the Studio brand.  They’ve made it all about cityscapes, man - that wasn’t the plan.  If I wanted to see a Donruss card with a blurry, squinting Griffey I’d look at his ’89 rookie.  How about you guys make a new set called “Donruss Cityscapes” and leave my Studio alone?

I may complain, but it’s still a damn good-looking design.  Sadly it was also Studio’s last.

Studio put out some beautiful and uniquely personal cards during their surprisingly long life span.  Nearly all the designs are attractive and forward-thinking, and they really stuck with the brand’s aesthetic.  They also put out some great parallels and inserts over the years.  This is one brand I really miss.

Here's every Studio base card design in order: 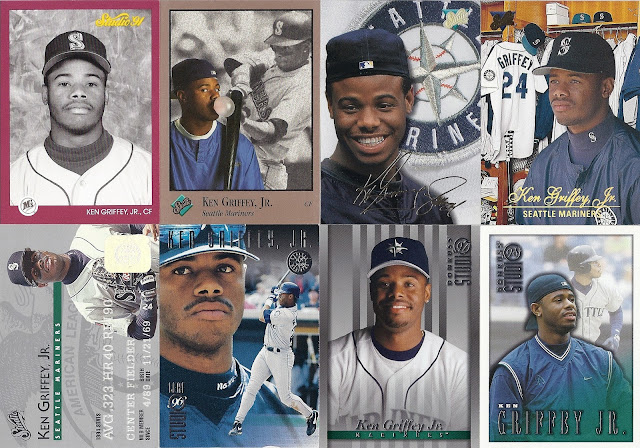 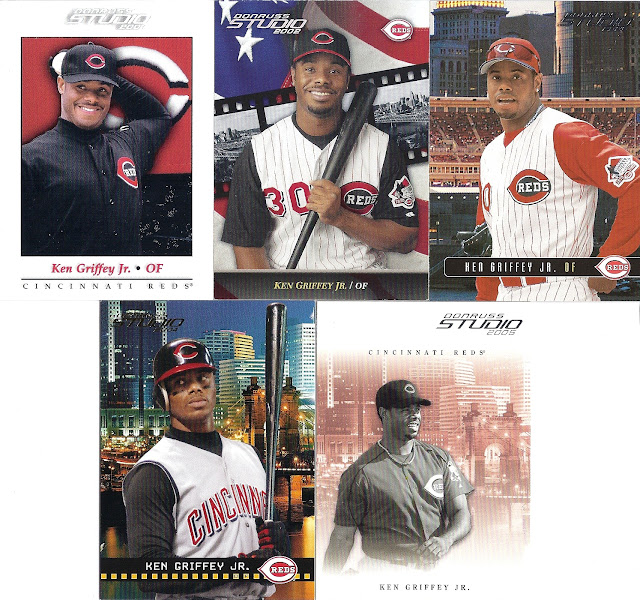 January, 2015 addendum: Studio is back as an insert in 2014 Donruss Series 2, and it's actually pretty awesome! Go Check it out!
Posted by The Junior Junkie at 11:53 PM