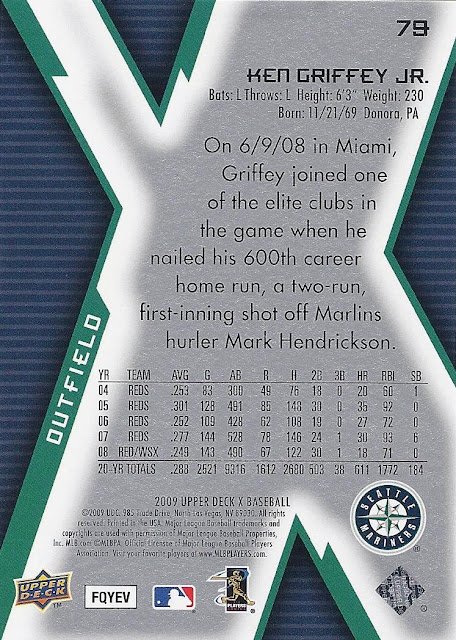 Is this a good Griffey card? Yes. A not horrible-looking gimmick set with a cool, multi-level insert.

The set: The second of two years of this brand, Upper Deck X is essentially just another gimmick set; and frankly I'm surprised it lasted more than one year.  You get a lot of this brand in repack boxes I can only assume because it didn't sell a lot of packs, and distributors got stuck with cases of the stuff.  Not that it's a terrible set, but there's not much substance to it.  I will, however, admit here and only this one time that I do kind of dig the logo.

There's something fishy about that "X" background.  The top right of the X is really thin compared to the other three, less than half the thickness of it's brother bits.  This seems to be purposeful because if it was the same width as the rest there would be no separation on top.  The X would lose its X-ness, and the name would have to be changed to Upper Deck Various Angles.  I feel like this throws off the balance of the whole base card design.  Also, when did I become such a graphic design critic?

I may bitch about the design (which isn't really all that bad), but my biggest boggle is with the whole concept.  Society had already been inundated with "x" crap for a decade when this set came out.  Remember?  You couldn't turn on the TV without being eye-raped by youth-focused "X-treme" product commercials full of bending guitar riffs and adults being disrespected by teens with no shame or sense of discipline.  I blame snowboard culture.  And Tony Hawk's Pro Skater games.  But that was all so long ago - seems to me UD should have struck while the X-iron was hot.  Why did they wait so long? 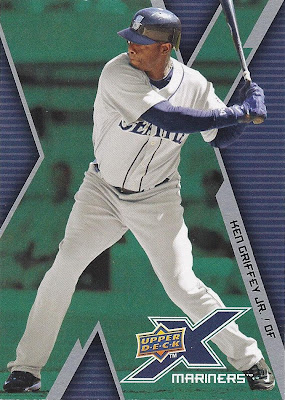 Junior looks a little uncomfortable in this at-bat.  It's not like he's an old man or anything, but he seemed to have a bit more ease about him at the plate just a few years before.  And let's not pretend there isn't a bit of a success gut starting there in the mid-section, probably a result of being laid-up by injury.  Despite all that it's clear that he still has a lot of focus and is fully capable of knocking one over the wall.  Be afraid, mound jockeys. 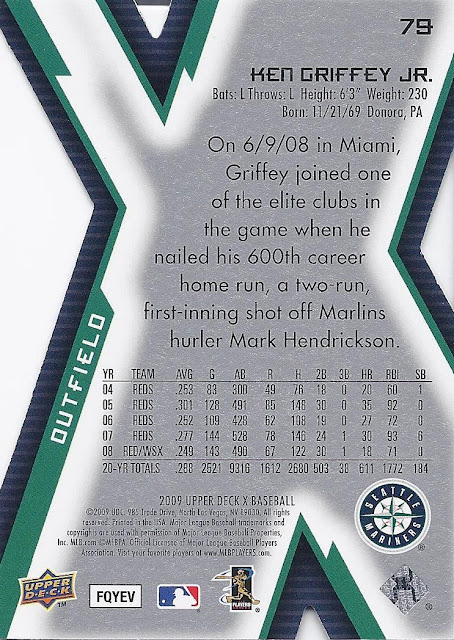 The parallel of Upper Deck X is a die-cut version of the base card.  And you just won't believe what shape they chose.  An X!  Don't get too excited. 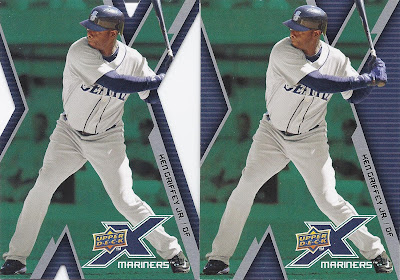 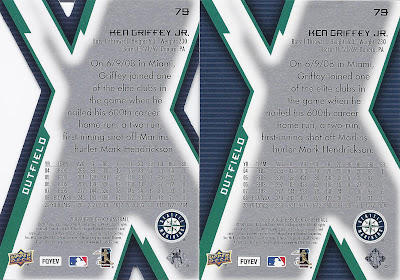 Hey, check out this crazy six-level beast of an insert: 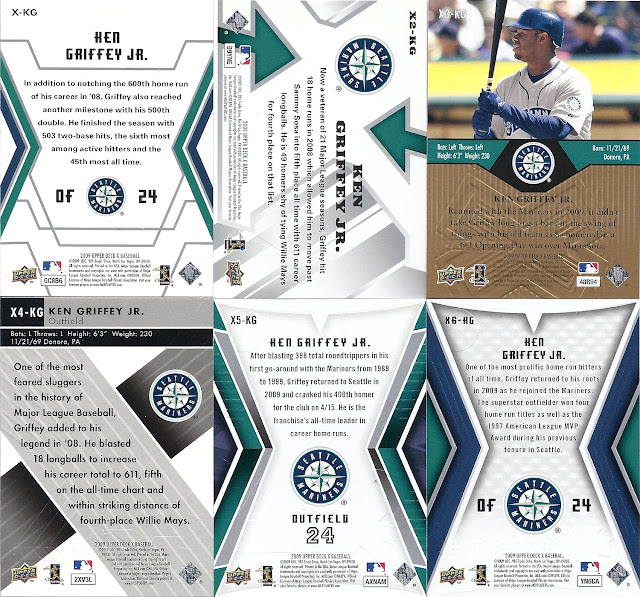 the Xponential insert is awesome with lots of color and holofoil all over the place.  the designs are cool and the cards looks like pieces of candy.  Plus they all have raised printing in one form or another, and the variety of players and designs adds to the fun of the pull.  It's also pretty cool that all the levelas appear equally easy to pull.  There's no 1:712 nonsense insertion ratio to worry about when trying to land a certain card - they're all reasonably gettable.  I'm a big fan of this insert.

I included some nice, big scans of every Xponential card at the end of this post.

Here are the Griffeys I am missing from 2009 Upper Deck X:

Psych!  I have 'em all.  Mark this one complete.  There are some memorabilia and signature cards in the set, but none are Griffeys.  Makes my job easier.

Here is a nice scan of every Xponential card: 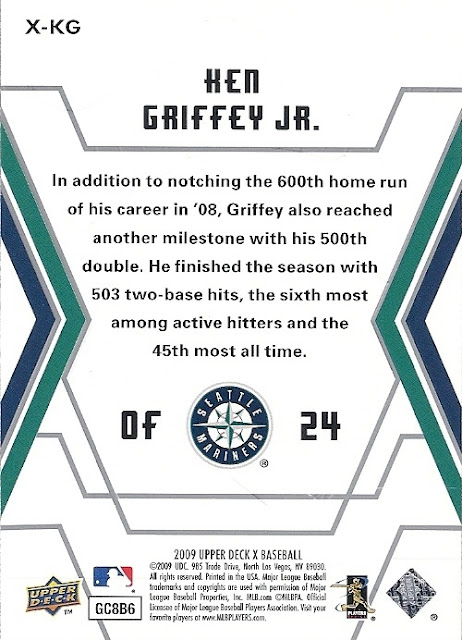 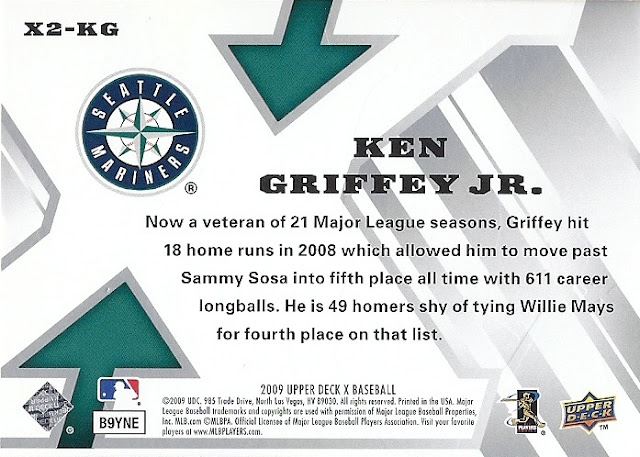 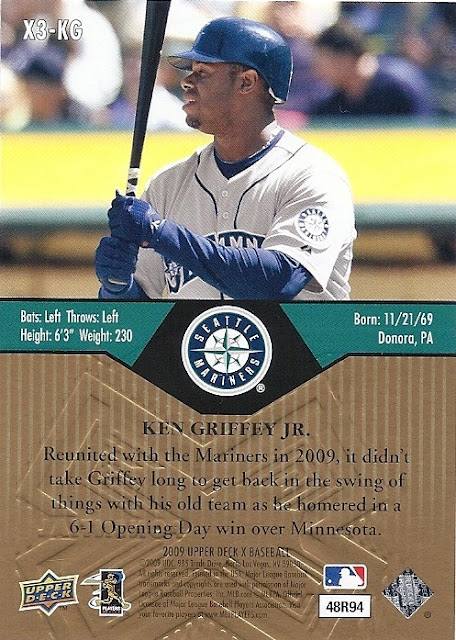 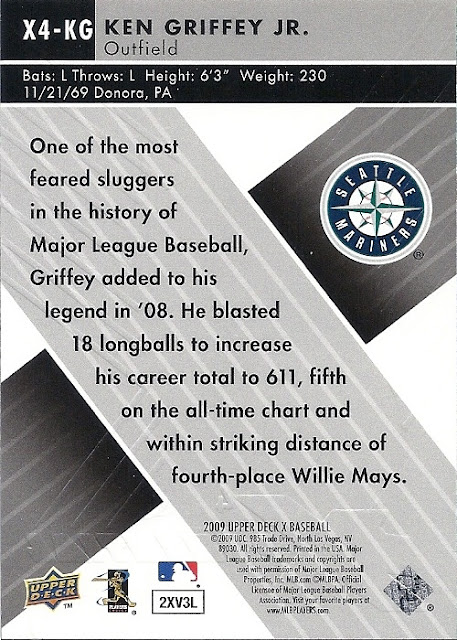 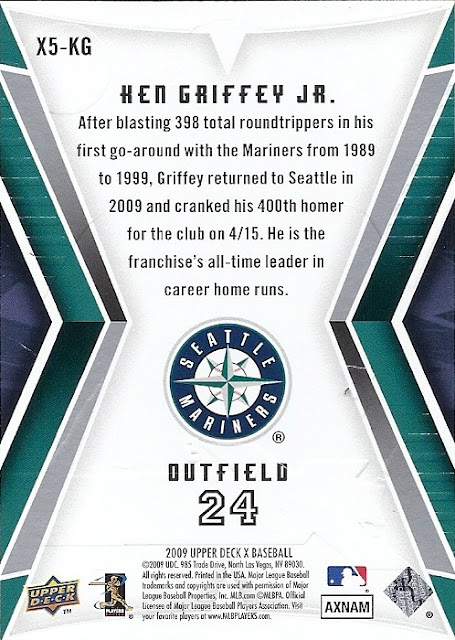 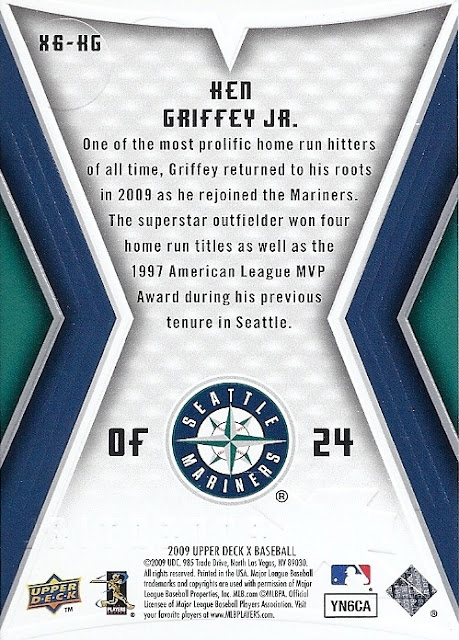 Since you stayed until the end, here is a bonus:

Which Major Leaguer's name is the most fun to say?