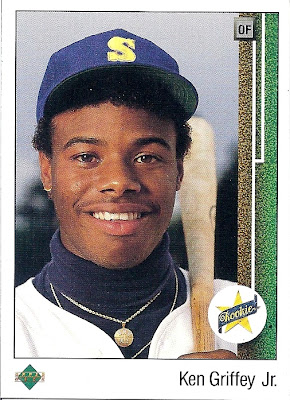 I’ve been pouring over Griffey love for the past week, and it’s been tough picking the winners; but after mulling over everyone’s submissions for a few days, I feel pretty good about how everything turned out.  Here's a link to the original giveaway post.  Now without further ado…..

While I can’t list every single submission I got, I will show the ones that made the final cut.  If you see yours below, it was in the running for the top three.  Go ahead and send me your address if I don’t already have it so I can send you a prize.  In no particular order, here are some of the best:


Sweet left-handed swing
Made me look past backwards hat
And root for Junior
Jim (garvey cey russell lopes) - I was expecting a lot more in the way of haikus, but Jim sent me the only one in the whole contest.  Nice work, too.


When you're a 12-year old left-handed hitting outfielder in Little League during Griffey's rookie season, it was a no-brainer for me to gravitate towards The Kid. His swing was sweet but his defense is what won me over; I'd purposely get a late break on fly balls in the hopes of laying out and making a Griffey-esque catch. Plus, all my knucklehead friends were collecting Jerome Walton rookies and me, being super savvy and not an idiot, would trade Waltons for Griffeys all day, every day, twice on Sunday.


Casey (Drop the Gloves!) - I like how personal Casey gets.  You can tell he’s been a Junior fan since the beginning.  I also took late breaks for fly balls in the outfield, but it was mostly because I was terrible.


Never have I feared a player more.


The swing, the swagger, the smile.


He was the ultimate Yankee killer.


AJ (The Lost Collector) - I like the perspective here of a fan of another team and the begrudging respect one can have for an opposing team’s star player.  That’s how I feel about Tom Brady when the Saints play the Patriots.  Great submission.


I was a 5 year old in 1989, and I couldn't afford Upper Deck, so I bought Donruss. The first pack had a Griffey in it, and the guy at the card shop gave me a penny sleeve and toploader.  It's still my most prized card, and it has never been taken out of that toploader.


Spankee (My Cardboard Mistress) - Very relatable.  That was also my first Griffey and my first prized card in general.  I still have a couple that have never left that cases I put them in at the card shop.


The Swing.  The Backwards Hat.  The Smile.


Judson (My Cardboard Habit) - Simple, to the point, and I like the all-caps as though these aspects were trademarked.


In 1988, according to Wikipedia anyhow, Ken Griffey, Jr. attempted to take his own life by swallowing nearly 300 aspirins.  Had he succeeded in this fatal deed, the world would have never known Junior's sweet swing, graceful outfield defense and his genuine, engaging smile.  Truly, the future-Hall of Famer's tragedy-to-triumph story should serve as a gleaming example of not just perseverance in sport, but also ultimate victory of the human spirit in the face of self-despair.


Mark (This Way to the Clubhouse) - This struck me on a personal level having lost several people in my life to suicide, one in particular to whom I was very close.  This is not an easy subject to talk about for people who have personally experienced its effects, but it’s true that Junior is a great example of coming through that adversity and making the best of it.


Nick (Dime Boxes) - The first submission I got, and truer words have never been spoken.  He is the man.  It’s just that simple.


Ken Griffey Jr. played the game the way it was meant to be played.  His unbridled enthusiasm and joy on the field made it impossible for this Texas Rangers fan not to like him.   I lived near Seattle in 1989-90 and one of the highlights of my baseball fandom was seeing Griffey Jr. and his father hit back to back homeruns.  It was a moment I later shared with my father on the phone and something we talked about years later when we watched Griffey Jr. hit a grand slam in Arlington.


Brian - I can’t tell you how jealous I am of you getting to see Junior hit a grand slam let alone he and Senior’s back-to-back dingers.  I only got to see Griffey play once - he went 0-for-3, and it was still one of the best days of my life.  Nice.


Those were all great.  Again, if one of those was yours, send me your address.  You get a prize!

Now for the top three.


Matt (Red Cardboard) - The humor, the great reference, the stark simplicity - yes, this is a fine submission, indeed.  Sometimes it’s hard to find the right adjective to accurately describe something - such is the folly of language.  Matt, however, nailed it.  I also like seeing some pure Griffey love from Cincy as I’ve witnessed a lot of Red fans displaying ambivalence about Junior’s time there.  Plus it’s the only one that made me laugh aloud.  If you haven’t seen Will Ferrell as Leonard Maltin, go check it out.


Corey (Tim Wallach) - Dude, great work.  This submission is clever and impactful.  I love the positive spin on Junior’s infamous wall collision as well as his sudden retirement.  I will admit that it was extremely difficult to pick between first and second place.  Plus, and it had no impact on who won this contest, I think we all know who your favorite player is...


This is every bit as deserving of the grand prize as the winner, so I’ll be sure and send you something cool.  You’ve already got all my Wallachs, so give me a minute to grab some more for you.


Sadly there can be only one grand prize winner, and here it is.


Ken Griffey, Jr. will forever be my favorite athlete.   From the wrinkled Donruss card that started it all to the hours spent in front of the bathroom mirror mimicking the man's swing, I spent my childhood following every moment of his career.  There will never be another player that steps on a diamond that will do what twenty four did for me in his time.


Patrick - Patrick sounds like someone who loves Junior as much as I do.  I can relate to everything he wrote, it has a nice personal touch with a little self-deprecating humor.   It makes me wish I’d allowed more sentences.  This guy sincerely loves Griffey.  Nice job.


I have a 1989 Upper Deck #1 Griffey rookie card for you, sir.  Let me know your address and what else you collect, preferably teams, and I’ll put together some more stuff for you.


Thanks for all the participation, guys!  I was pleased with the turnout as well as the quality and positivity of what everybody sent.  I promise I’ll put together another giveaway in the near future, probably one that doesn’t involve creative writing.  A certain retired slugger has a birthday coming up in a few months.  That may be a good time…
Posted by The Junior Junkie at 6:34 PM