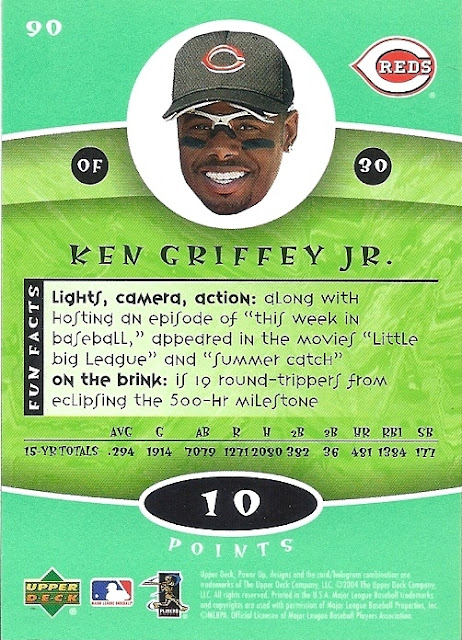 
Is this a good Griffey card? Yes.  A failed game-based release with a lot of personality.


This was another one-year-only, gaming-based set with a points system based on card rarity.  This is not the first time Upper Deck would try their hand at putting an interactive gaming spin on card collecting.  And who could blame them with the popularity of Pokemon and Yu-gi-oh and all that other nonsense that kids were blowing all their allowance money on (Please note that baseball card collectors have every right to make fun of gaming card collectors because our hobby is based on real people, not cartoon animals).


I am curious about what the rules were as it looks to me like a simple add-up-the-points system that is far too boring to be fun.  Perhaps it was done in the style of Battle (aka War) in which each person lays down the next card in their deck sight-unseen and the higher point card wins that round.  If that was the case, I would never play with Griffeys for fear of losing them.  Can you imagine having a Griffey Red valued at 500 points and someone pulling a Hank Blalock Blue?  In such a situation, I would probably be a bad sport by snatching back my Griffey and running in the opposite direction.

I hate pulling images from COMC (it feels tacky); but I found the rules to the game there on the back of a sticker card, and I have no stickers to scan.  This is not a game you play head-to-head against other collectors - it’s a game you play against everyone in the world with Internet access and some Upper Deck Power Up cards.  I assume you could only play a certain card once since each card has its own unique code, so I suppose the best strategy was to hoard high-value cards until you had enough to dominate everyone else.  It probably got harder to win as the weeks went by and the people who adopted the hoard-and-wait strategy started pulling the trigger.


I have no idea how popular the game actually was, and as you can see here the website is officially out of service.  Did anyone out there actually play this?  On second thought don’t admit to that. 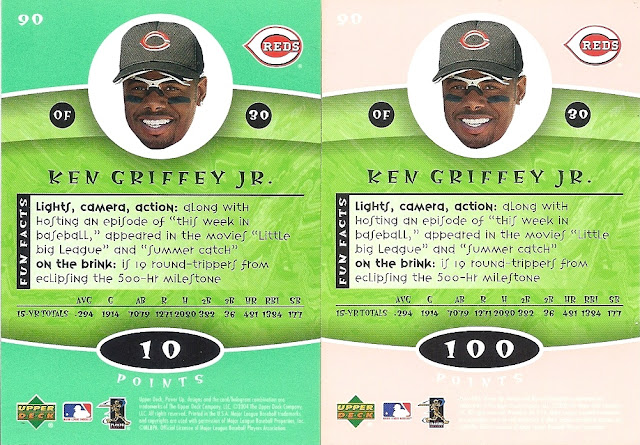 I have the green and orange versions, the two least rare cards from this set.


This is one of those “big head” cards (there are a lot out there).  You usually find these sporting caricatures á la early-90’s Score All-Stars, but this one has a Helena Bonham-Carter Queen of Hearts quality that is as creepy as creepy gets.  Also, Junior’s facial expression is hilarious.  That’s the same face I make when I’m trying to make a toddler laugh (it works).  The “wacky” font on the back makes the card difficult to read, but I like how it mentions the movies Junior has been in.  And I’m crazy about the flipped-up shades, especially in portrait mode.  It’s so nerd-chic it makes me want to sip champagne at an MC Chris concert.


Out of curiosity and because I may have to buy them someday, I did a quick search in the usual places for any example of the remaining colors of Griffey but found nothing.  In fact I ran a search for all the rarest colors of any player and found only one example: a blue Pujols on eBay for a whopping $200.


I can only assume that the reds and blues were like the proverbial golden snitches, sporting point values so high that they practically guarantee the cardholder a win.  But now that the game is over, their only value is their rarity.  The blues were inserted at 1:240 packs, and they’re not serial-numbered.  So how many are there?


One interesting thing about the cards is that the rarer the color, the cooler the card.  They didn’t just assign values to colors arbitrarily; the cards are actually better.  The common green version has pretty much no dazzle to it.  Orange is nearly identical to the green, but with the step up to purple you gain a shiny refractor aspect.  I’ve never seen a red, but the blue, it seems, is comparable to a super-refractor with lots of cool textured holofoil and translucence.


If anyone has a purple, red, or blue, send me a nice scan or trade me the card itself.  I’d love to post them here. 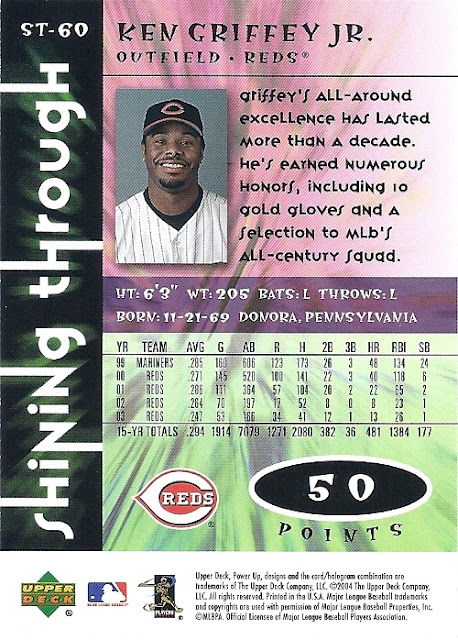 This insert, worth 50 points, is also useable in the game.  While colorful and not unattractive, it’s that mildly relective dull chrome UD used on a lot of their cards in the 2000’s.  It’s shiny but doesn’t scan very well.  It’s also got more stats on it than the base card.


Here’s a list of Griffeys from 2004 Upper Deck Power Up that I still need:

One more bit of the required blogger nit-pickiness: F. Scott Fitzgerald once said that using exclamation points is like laughing at your own joke.  While I think this perspective is a little extreme, I'm not crazy about their use right in the title of the product.  I get that they're trying to zhush up the brand and make it more exciting, but I find that oftentimes exclamation marks have the opposite effect.  This is one of those times.

Despite all that, this is my most positive review of a game-based card set so far.  Now here's some close-ups of the orange one. 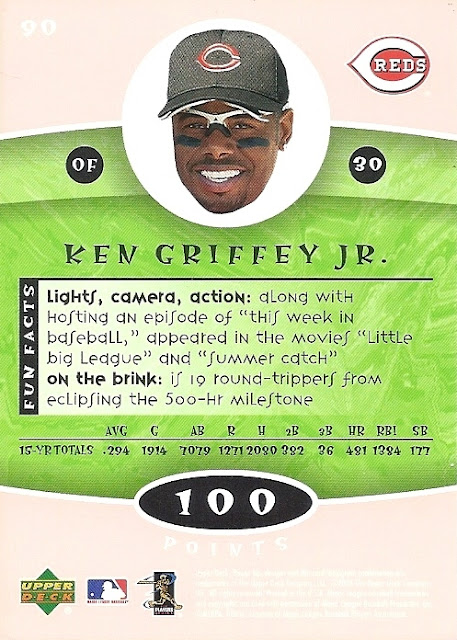 Posted by The Junior Junkie at 9:52 PM