COMC vs. eBay: the Experiment Part 1

This is a baseball card experiment.  In the interest of science and a rampant, unchecked lust for Griffey cardboard, I recently made two large purchases of Griffey cards, one from COMC and another from eBay.

The question: in terms of new Griffeys, is it better to buy individual cards on COMC or bid on high-quantity eBay lots?


Over at COMC, in exchange for my $66.81 they are shipping me 62 Griffey cards that were hand-selected by me including dozens of Griffeys I am missing and a couple of very limited-run parallels plus a few National giveaway and VIP cards.  That’s $1.08 per card for 62 definitely new-to-me and completely awesome Griffey cards.


In the other corner is the lot I won on eBay: $54.55 shipped for 370 Griffeys, the vast majority of which are sight-unseen.  At 14.74 cents per card, this is one of the better deals I’ve gotten.  I usually average around 21 cents per card in lots and have even spent upwards of 26 cents for lots that struck my fancy.  Anything over that is probably showing a nice insert or two in the picture and is therefore a statistical outlier.


Here are the numeric results of the two purchases:


The magic number here is 7.2.  In order for the eBay lot to contribute the same amount of new growth to the collection as the COMC purchase, I need to average 1 new Griffey for every 7.2 cards in that lot.  That’s about 52 new Griffeys that need to come out of that box.


Of course collection growth is not the only factor here.  Regardless of what the eBay lot yields, I will still have 370 Griffey cards at the end of it.  I may very well end up with 370 duplicates, but that includes trade fodder and condition upgrades - plus I totally love duplicate Griffeys (they’re still my favorite things to get in trades), so I can’t say they have no value.  There is certainly some benefit either way.


I already know what I’m getting from COMC, so I’ll have to wait for the eBay package to arrive before I have a definite answer.  It was estimated to arrive no later than yesterday, but according to the USPS tracking, I may not get it until tomorrow.


My expectation is that the eBay lot will produce a few dozen new Griffeys, but 52 is pushing it.  Still, say I pull 40 new Griffeys and 330 duplicates - that’s a pretty sweet deal, too.  I expect this is about where I'll end up.


The real problem with eBay lots is that in the long run the more I buy the fewer new Griffeys they will contribute to the collection.  I used to land a few lots a week and always end up with sufficient newness to justify the cost.  Now with roughly 5500 Griffeys in the binders, I am either fast approaching or just past the tipping point.  The advantage here is going to go more and more often to COMC.


Will that stop me from landing the occasional eBay lot?  Heck, no.  Thumbing through a stack of mystery cardboard every now and again helps keep my powder dry.


I’ll let you know how all this ends up in Part 2. 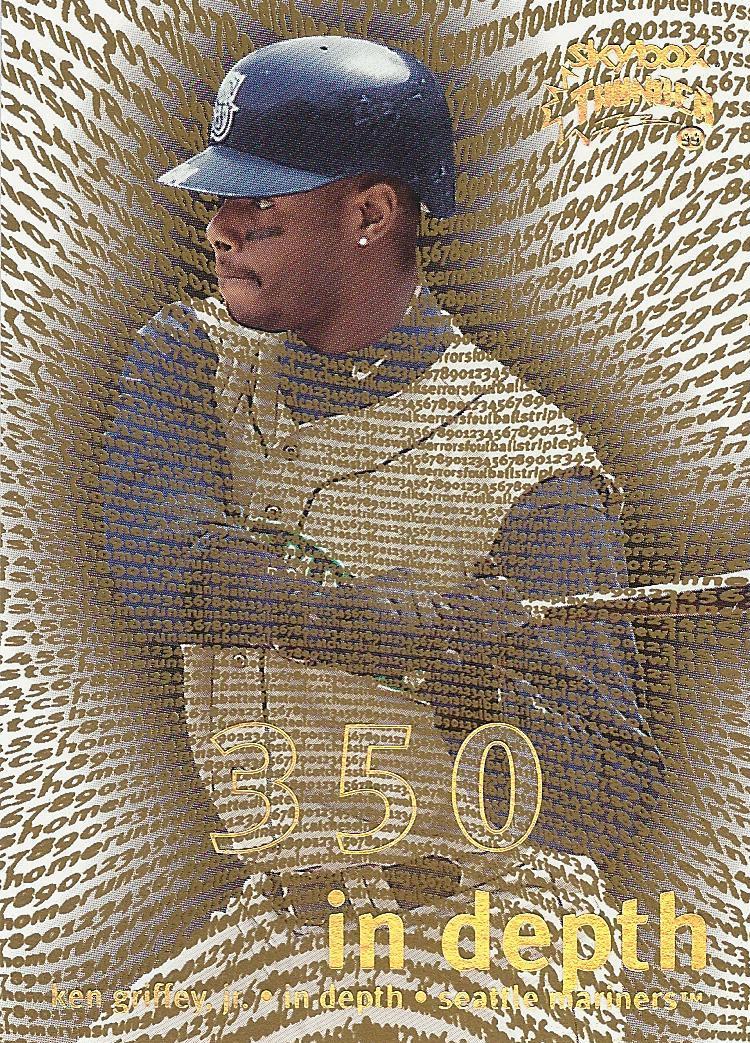