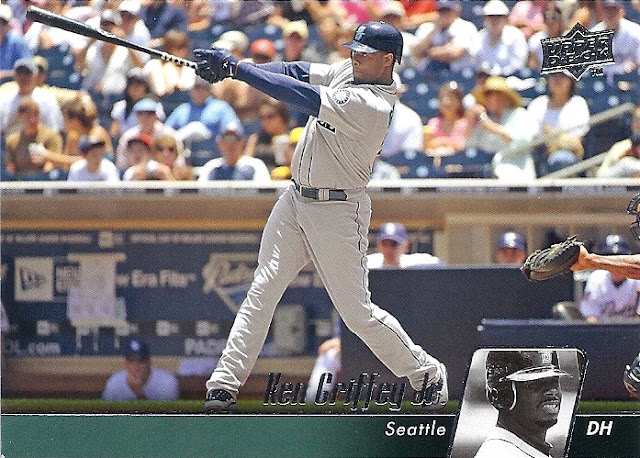 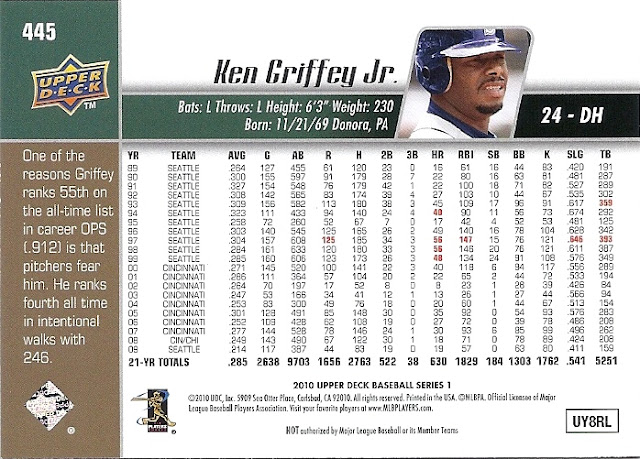 Is this a good Griffey card? Yes.  This is Junior’s sunset card from the brand that he helped build.


The set: 2010 Upper Deck was doomed from the start.  The brand was dealing with lawsuits and licensing issues that contributed to this being their last flagship baseball set.  See my other post for limited details.

Decent pulls from this set are very few and far between.  I know this because I bought a hobby box and a jumbo box from dacardworld.com a few months back for incredibly cheap just for the joy of ripping all those packs.  That’s 60 packs and I still didn’t get very much bang for my buck.  Don’t get me wrong, I got a ton of cards and a whole lot of keepers, but the product lacked the excitement I had come to associate with box breaks and Upper Deck products in general.  If you still want to buy some, take a look at this and this.

A lot of standard action shots and a few that were clearly taken in a portrait studio.  None of the photography here is exceptional.  I did notice a whole lot of cards featuring pitchers at the plate, though.

There was some value in the packs I opened.  I pulled the Posey rookie, but there was only one out 1,080 cards. 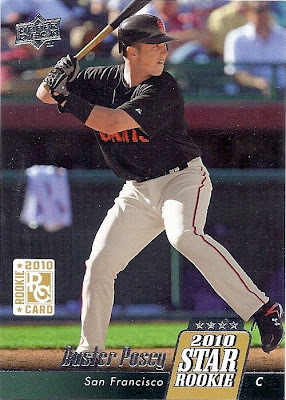 The gold parallels (#/99) are nice but they’re a really tough pull, and there are so many cards in the checklist that it’s barely worth hoping for a good one.  I pulled two and already shipped one off in trade packages.  The other one is no Griffey but still pretty good: 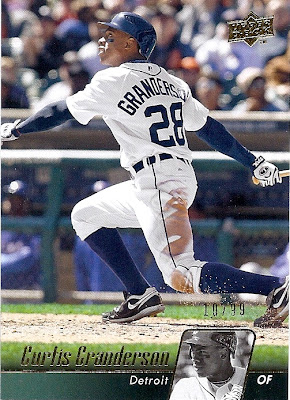 I also got a couple of Portrait, Pure Heat and All World inserts, but the seeding was incredibly sparse.  You would think they’d be numbered for as rare as they were: 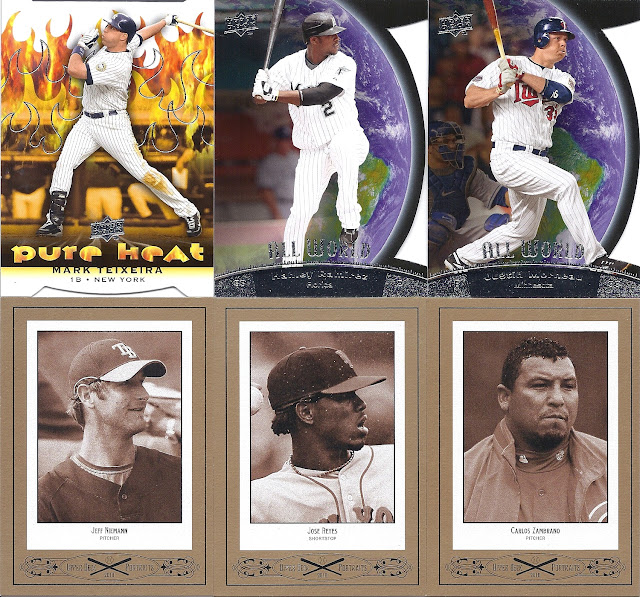 One high point of the product is the cool Joe DiMaggio Heroes Set: 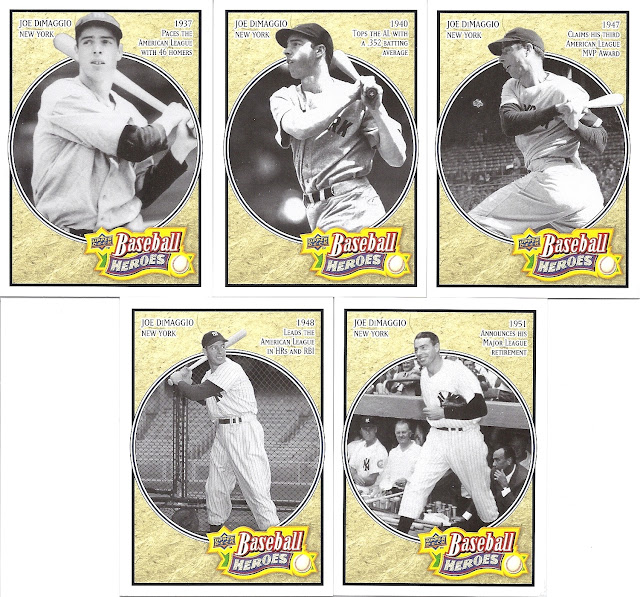 This design is done to death, but I pulled a nice quantity of these cards and now have mild interest in completing the set.

Another thing they did this year that I love is the inclusion of stadium cards.  Even the photography on these is outstanding. 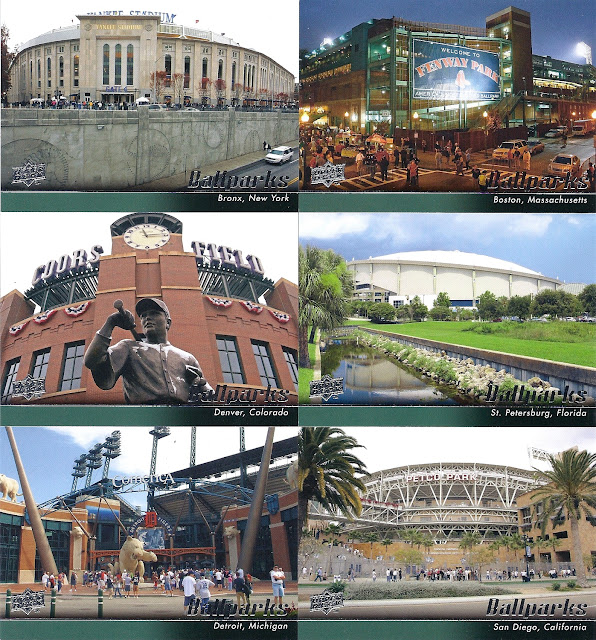 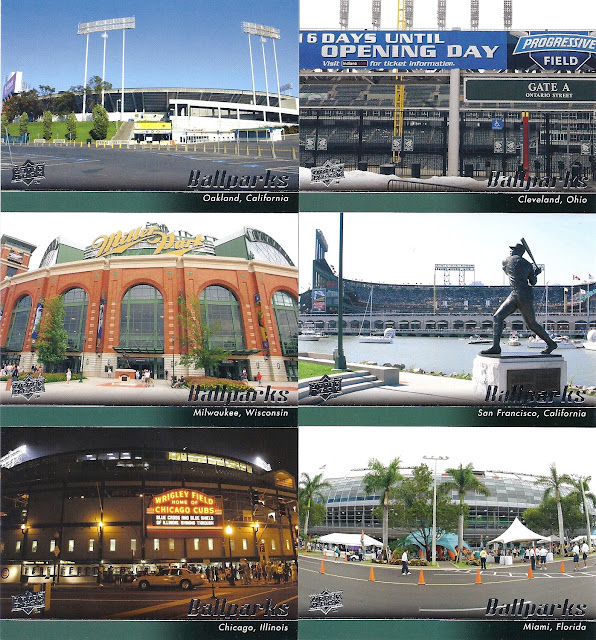 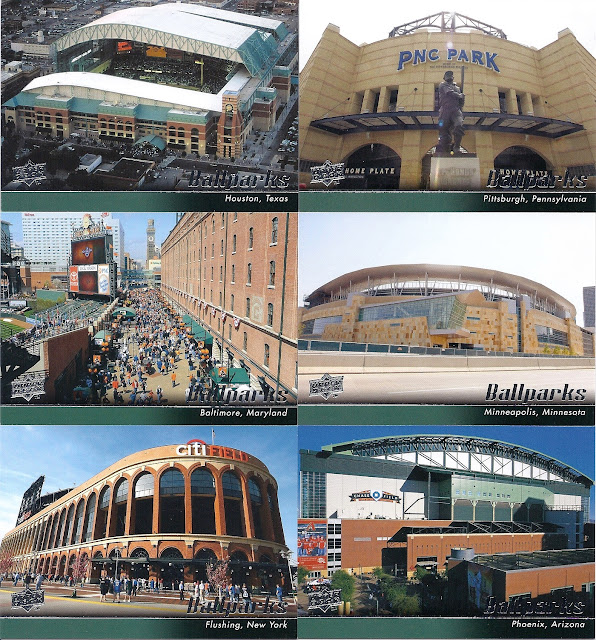 There are also these bizarro Celebrity Predictor cards.  I’m still pretty clueless as to what the point is, but there’s something about them that makes me want to collect every one.  I pulled a whopping eight of the 10-card set (though they’re numbered as though it’s 20 cards).  I am missing CP-1/2 Jennifer Aniston & John Mayer and CP-17/18 Angelina Jolie & Brad Pitt.  I’m not a big celebrity guy, but I do want these. 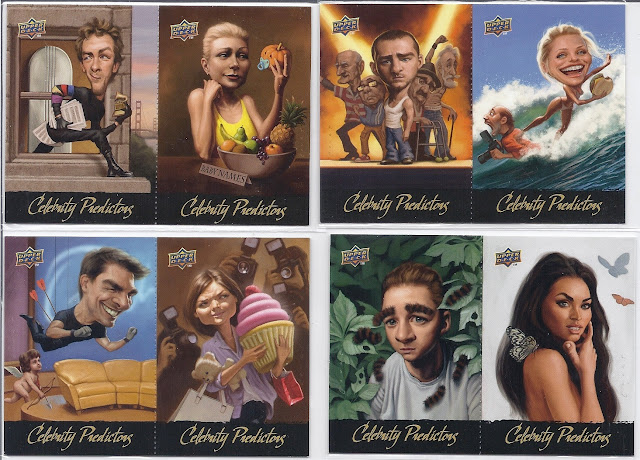 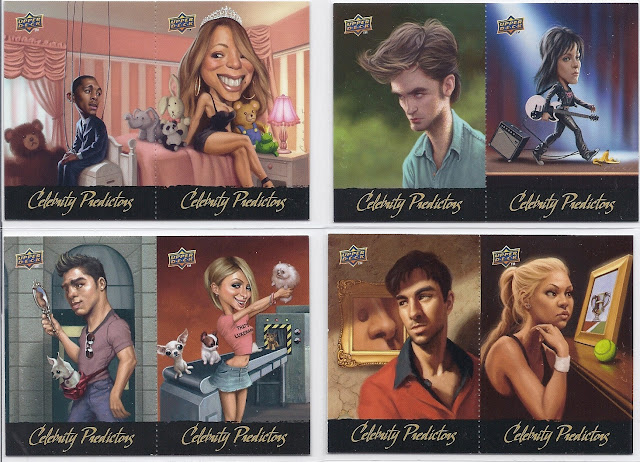 Upper Deck also added these things called Double-Takes which are short-printed base cards that have been lightly photo-shopped.  The differences are so slight that they can be difficult to spot.  I don’t have any to scan because I wasn’t looking for them when I opened these boxes.  At 1:96 packs, I could very well have landed one and already given it away.  Oh, well.

You are guaranteed one relic card per hobby box.  I pulled Nick Markakis, but I traded it away pretty soon after that.  The jumbo box on the other hand contained zero relics.

Besides what you see here, this set is nothing to get your panties in a twist over.  Let’s just get to the Griffey: 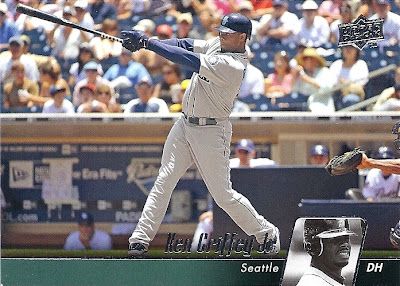 It’s a nice horizontal shot of Junior in full-on swing away mode.  I really like this picture, but I can’t help wondering what it would have been if they knew this was going to be his sunset card. 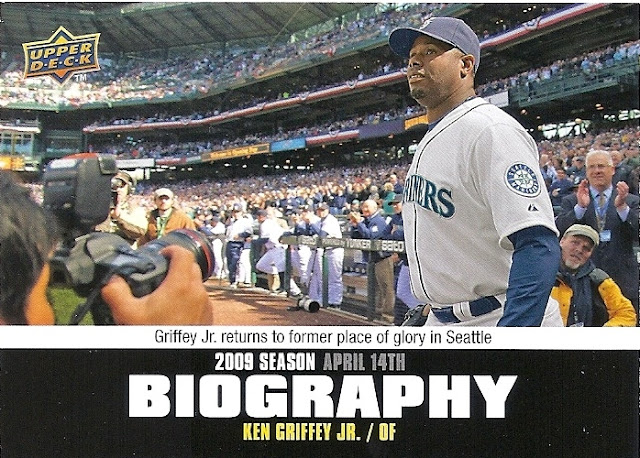 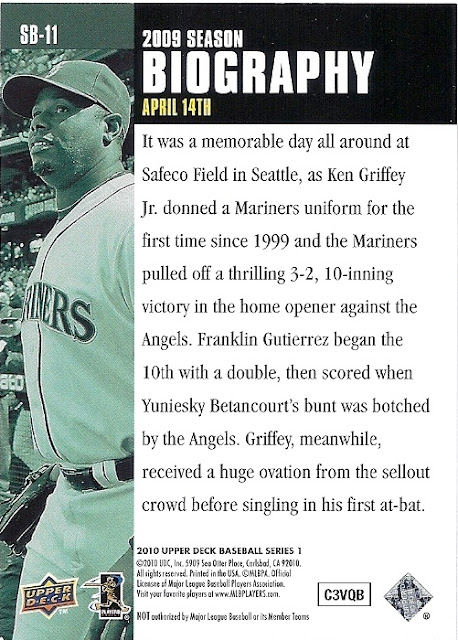 This could have been a great sunset picture or even a cool unnumbered SP considering Junior’s history with the Upper Deck brand.  I think including it in the above insert cheapens this awesome card. 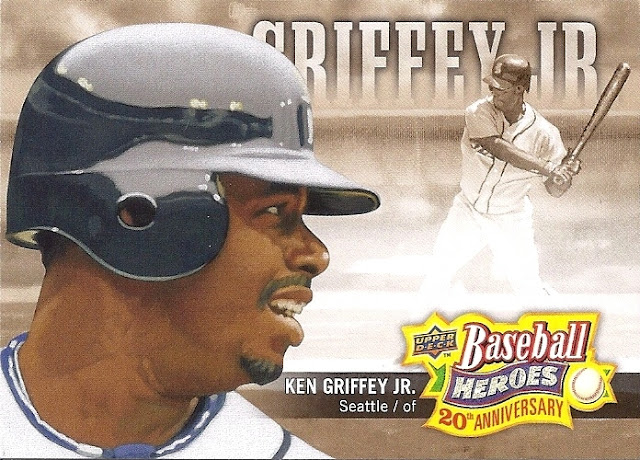 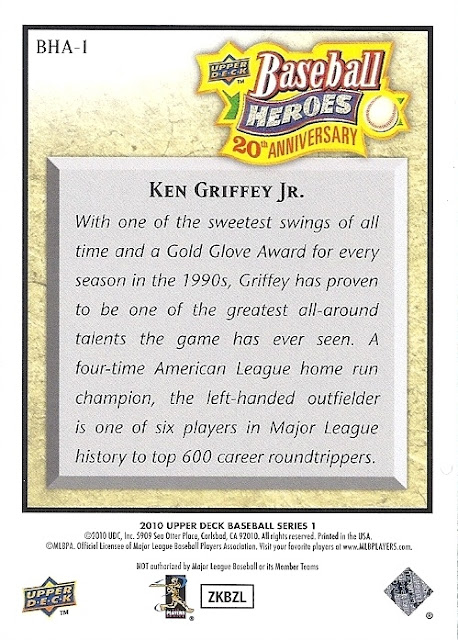 Another reasonably cool insert design.  There is an autographed version of this card that is hand-numbered out of 90. 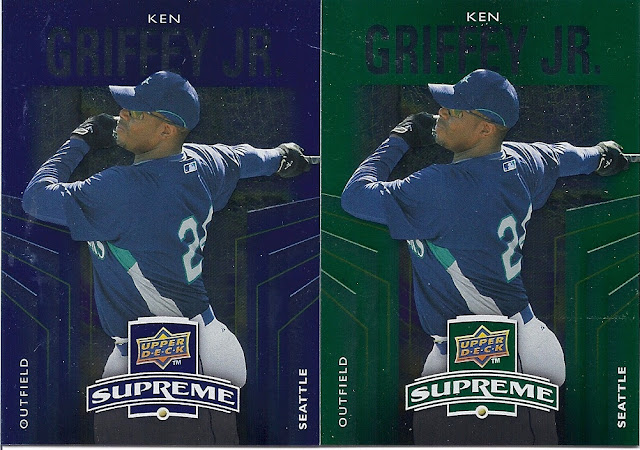 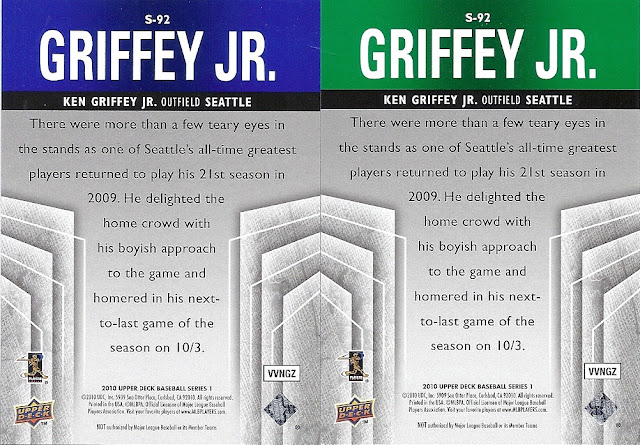 These strike me as a 1:1 or 1:2 seeded insert, especially considering the 100-card checklist, but they’re much harder to pull than that.  Green is the more common of the pair at 1:8 packs and Blue is seeded a sparse 1:27 - apart from the color, the cards are identical.  Why were they so stingy with the inserts in 2010?  I am assuming these were going to come in more colors that were slated for release in series 2 which never happened.
Here are the Griffeys I’m missing from 2010 Upper Deck: 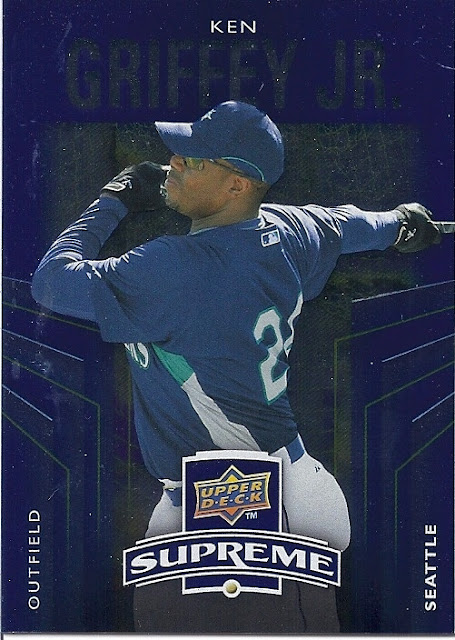 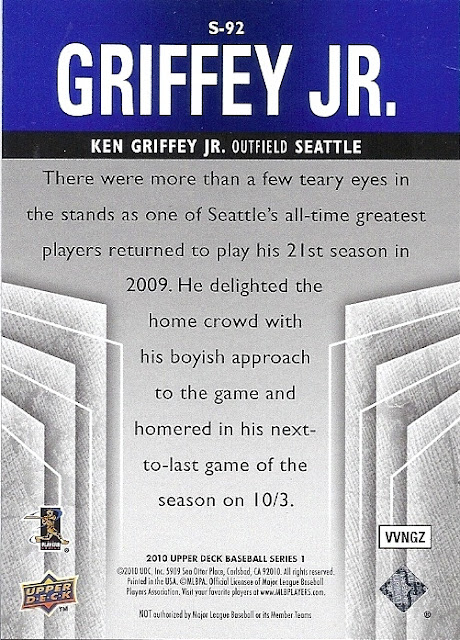 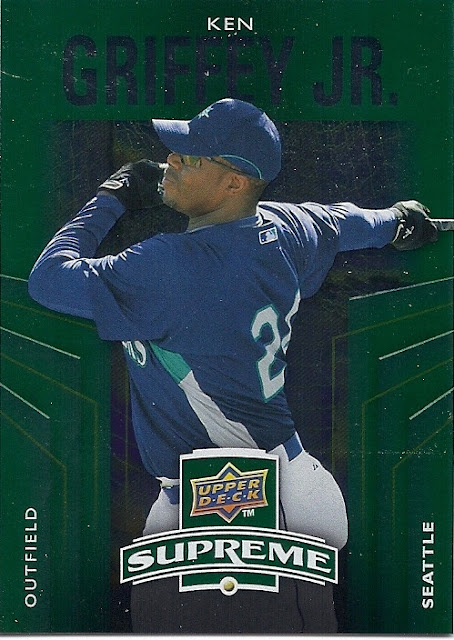 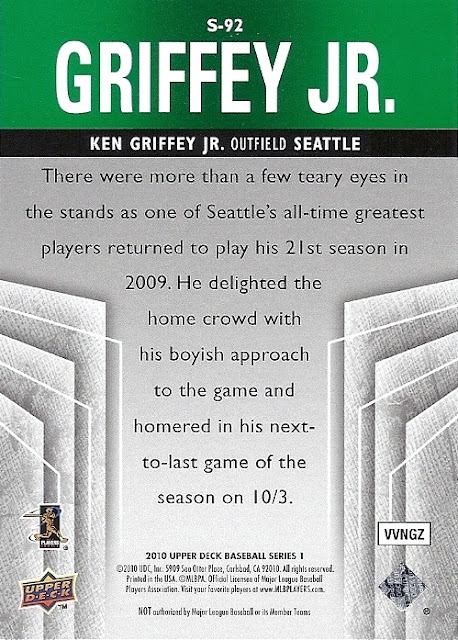 Posted by The Junior Junkie at 9:07 PM